Much of the information in this article may be old news to many serial buffs, but I thought the following account of Republic’s failed attempt to make a Superman serial, and the tangled legal aftermath, might be of interest to my readers. If nothing else, it gives me a chance to write about my hobby (movie serials) and my profession (law) at the same time. END_OF_DOCUMENT_TOKEN_TO_BE_REPLACED

Restorationist Eric Grayson, also known as “Dr. Film,” is working on restoring the 1929 Mascot part-silent/part-sound serial King of the Kongo (starring Walter Miller and Boris Karloff). The serial has long been missing the soundtrack for its talking portions–some of which, however, still exists separately from the film print, having been recorded on disc. Eric is working on reuniting all that remains of the soundtrack with the best possible print; his latest update is here:

Update on King of the Kongo

April 18th, 2019: More big news from VCI via Tom Weaver, even more exciting than the previous announcement, and so important that I’m reposting in full Tom’s latest announcement on the Classic Horror Film Board:

VCI wants the opinion of the Classic Horror Film Board: “How much interest IS there in Lost Universal Serials — complete AND incomplete?”

It would cost VCI a pretty penny, but they CAN get from Universal, in addition to all the serials they ARE getting, these super-oldies:

Then, too, they can get these INCOMPLETE serials:

Part of the email I received from VCI honcho Robert Blair:
<< Do you think there is any value to releasing these incomplete serials? We did really pretty well when we released BRENDA STARR a few years ago. It was mostly complete, but missing sound on one chapter and picture on another, plus there was nitrate decomp sporadically. <<

<< I think everything that can be saved and mastered, should. I have been thinking of maybe trying to do a Kickstarter, or Go Fund Me campaign, to at the least, raise the money to do the mastering, restoring and authoring, but I have never done one of those. Maybe I’d start with just the complete serials. <<

How much support would WE (the CHFB) provide?

If any CHFBers contribute to serial message boards, perhaps they could post these lists there, and then report the reaction.

Following up on Tom’s suggestion in the last paragraph above, I’m soliciting my readers’ reactions to this proposal; if you’re keen on seeing these serials come out of the vault at long last, please post a comment and I’ll make sure that all reactions are shared with VCI.

April 17, 2019: A tip of the hat and another big thanks to Clifford Weimer, the webmaster of the old-movie site In the Balcony, and a contributor to special features on past VCI serial DVDs. He has provided some more concrete details on the upcoming VCI releases at this link. Particularly exciting is his hint that nine more Universal serials, never before available on video, may be in play; I’m having visions of a good and complete print of The Lost Special finally becoming available, or–even better–some of the long-lost early Universal titles like The Airmail Mystery and Danger Island surfacing for the first time since their original release. Let us wait and see.

April 5th, 2019. The estimable Tom Weaver–serial, B-film, and horror-movie expert extraordinaire–has broken some great news for serial buffs over in two threads on the Classic Horror Film Board Forum. Robert Blair of VCI has informed him that Universal is going to give VCI access to the original film elements for its serials; VCI plans to use these for new DVD releases of those serials (the linked threads refer to Blu-Ray, not DVD, but as you can see from a second post on the second thread linked, at least the first two announced releases, The Roaring West and The Red Rider, are DVD and not Blu-Ray).

It’ll be great to see top-quality prints of all these titles, even the weaker titles. I’m particularly excited about Wild West Days, Don Winslow of the Navy, Pirate Treasure, Gang Busters, and the four Buck Jones serials. Winslow is widely available only in a very poor print, the superior Hermitage Hill edition being very hard to find; the only decent release of The Red Rider was also a no-longer-available Hermitage Hill effort, although that print could still be found on Youtube the last time I looked. The other three Jones serials and Wild West Days have never been given “official” DVD releases, Gang Busters has never been made available in a print sharp enough to do full justice to its shadowy visuals, and no really good print of Pirate Treasure has ever surfaced–even the Serial Squadron’s long-delayed DVD release of Treasure is, judging from the sample episode on Youtube, only good in comparison to the execrable VHS copies of the serial.

In short, this announcement is the best and biggest home video news that serial fans have received for some time. Spread the word, and give a big thanks to Mr. Weaver and Mr. Blair.

END_OF_DOCUMENT_TOKEN_TO_BE_REPLACED 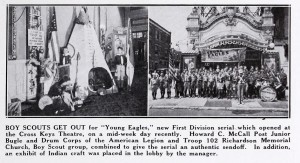