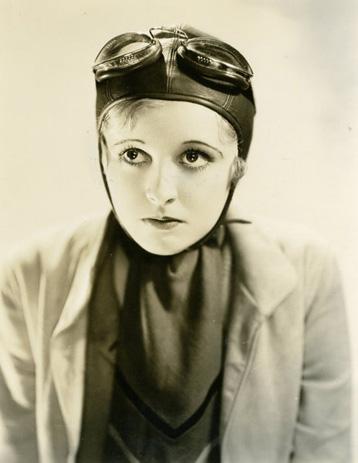 Above: Lucile Browne in a publicity portrait for the serial The Airmail Mystery (Universal, 1932).

The typical heroine of 1920s and early 1930s serials was a slender, perkily energetic “good sport,” the type of girl who spunkily and cheerfully tackled various dangers alongside the hero. The vivacious Lucile Browne fit this image perfectly, and as a result starred in more serials than any other leading lady of the 1930-1935 period. In addition to her ability for displaying peppy courage, Browne’s skill in  depicting wide-eyed alarm made her an ideal heroine for the cliffhangers of this era, which were still partly cast in the melodramatic mold of the silent era and gave their leads more opportunities for emoting than later cliffhangers would allow their stars. The charming blue-eyed blonde brightened no less than six cliffhangers–a record unsurpassed by any other actress in the sound era, and equalled only by Linda Stirling and Jean Rogers. Today, both Stirling and Rogers are still very familiar to cliffhanger fans, while Lucile Browne is largely forgotten in the same circles; the first sound-serial queen deserves to better-remembered by serial fans.

Lucile Browne was born in Memphis, Tennessee, but grew up in St. Petersburg, Florida. She worked as a model in New York after finishing high school, and then spent some time with a traveling Chicago acting company before arriving in Hollywood around 1930. Her first major screen assignment was the heroine’s role in Fox Film Corporation’s 1930 Western Last of the Duanes, which starred George O’Brien. Fox featured Lucile in two or three other films, including the Will Rogers picture Young as You Feel, but then lost interest in her; almost immediately upon her departure from Fox, she signed on at Universal for her first serial, 1931’s Danger Island.

Danger Island featured Lucile as Bonnie Adams, a girl whose dying scientist father told her of a radium mine he had discovered on a remote tropical island. Slick Ben Arnold (Walter Miller) backed an expedition to “help” Bonnie find the island, but was secretly plotting to seize the mine for himself. Fortunately, the captain of the vessel chartered by the expedition, Harry Drake (Kenneth Harlan), was a two-fisted hero who set out to thwart Arnold’s schemes as soon as he realized the villain’s true goals. Unfortunately, Danger Island is one of about half-a-dozen early Universal serials that has been officially “lost” since the 1930s. The stills and synopses that survive seem to indicate the cliffhanger was a colorful and exciting one, with atmospheric sea and jungle locales. The cast members–former silent star Harlan as the rugged sea captain, Miller as a greedy villain, Lucile as a somewhat naive but adventurous heroine–also seem to have been well-suited to their material, making the serial’s presence on the “missing” list very frustrating to fans.

Above: Lucile Browne is carried off by a remarkably hideous-looking gorilla in Danger Island (Universal, 1931).

Above: Kenneth Harlan and Lucile Browne in Danger Island.

Browne quickly moved on to her next cliffhanger, Universal’s Battling With Buffalo Bill (1931). She was cast as Jane Mills, whose father (William Desmond) led a group of frontier townsmen beleaguered by Indians. The Indians’ attacks on the town, Hard Rock by name, were instigated by crooked gambler Francis Ford, who wanted to drive off Hard Rock’s inhabitants in order to claim a local gold mine. Tom Tyler, as Buffalo Bill Cody, rode to the rescue of the town and succeeded in pacifying the Indians and bringing Ford to justice. Battling With Buffalo Bill was a simple, fast-moving Western adventure, with frequently melodramatic dialogue that was handled with admirable seriousness by the cast members. Browne delivered a charmingly enthusiastic performance, rattling off florid denunciations of the villains or expressing fervent gratitude to the heroes with overdramatic but endearing vigor. 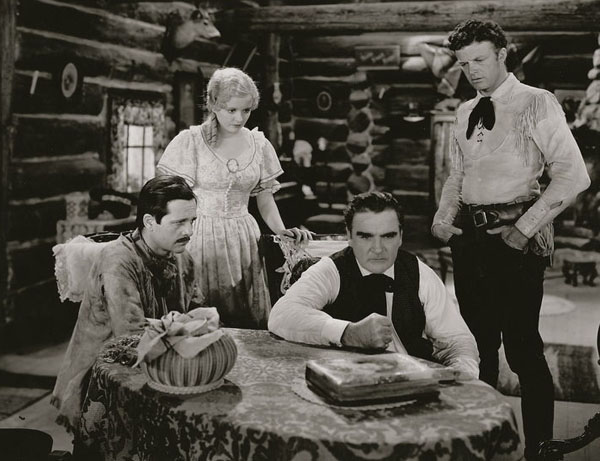 Lucile appeared in a couple of independently-produced B-films before starring in her third and final Universal serial, 1932’s The Airmail Mystery. In this airbone thriller, she played mine owner Mary Ross, who teamed with her brother (Al Wilson) and hero Bob Lee (James Flavin) to protect aerial gold shipments from an air pirate called the Black Hawk (Wheeler Oakman). Unfortunately Airmail Mystery, like Danger Island, is one of the lost serials, and seems to have left behind even fewer traces than that earlier cliffhanger. As far as Lucile Browne was concerned, it proved the most important film of her career, as she and her leading man James Flavin fell in love and were married in 1932. Unlike most Hollywood marriage, their union would prove a lasting one. 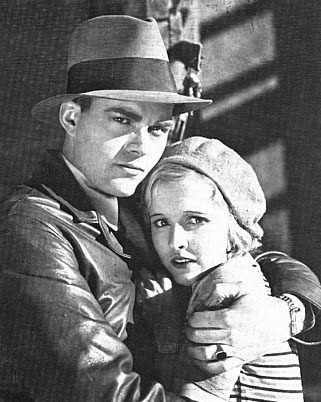 Above: James Flavin and Lucile Browne in The Airmail Mystery (Universal, 1932).

Above: An unidentified villain lifts Lucile Browne into a car in The Airmail Mystery. The other villains in the scene are Ethan Laidlaw (back to camera) and Walter Brennan.

Shortly after Airmail Mystery, Flavin had a falling-out with the unpleasant producer Carl Laemmle Jr., son of Universal’s boss; this clash might have had something to do with Lucile’s move to Mascot Pictures for her remaining serial work. Her first Mascot cliffhanger was The Last of the Mohicans (1932), a loose adaptation of the classic novel by James Fenimore Cooper; Harry Carey starred as Cooper’s hero Hawkeye. Lucile was a secondary heroine in this cliffhanger, taking a back seat to the more famous Edwina Booth, who had co-starred with Carey in the MGM feature Trader Horn. Booth and Browne played Cora and Alice Munro, daughters of a British colonel in colonial America. The girls, escorted by scout Hawkeye and Major Duncan Heyward (Walter Miller) were journeying to join their father but found themselves in the midst of a struggle with the French and their Indian allies. Their journey turned into a dangerous odyssey, thanks to the vengeful Indian Magua (Bob Kortman) and the greedy French spy Dulac (Walter McGrail). Hawkeye, Heyward, and Hawkeye’s Mohican Indian friends found themselves called on repeatedly to rescue the girls from Magua and his tribe and from Dulac’s outlaw band. Last of the Mohicans, though padded in spots and filmed under rather primitive conditions, featured some beautiful location work, exciting action, and a full-blooded and unabashedly melodramatic script. Although Edwina Booth got much more dialogue, her performance was highly theatrical, and Lucile emerged as the more natural and appealing of the two leading ladies, even though she had comparatively little to do in the serial other than be captured and rescued. 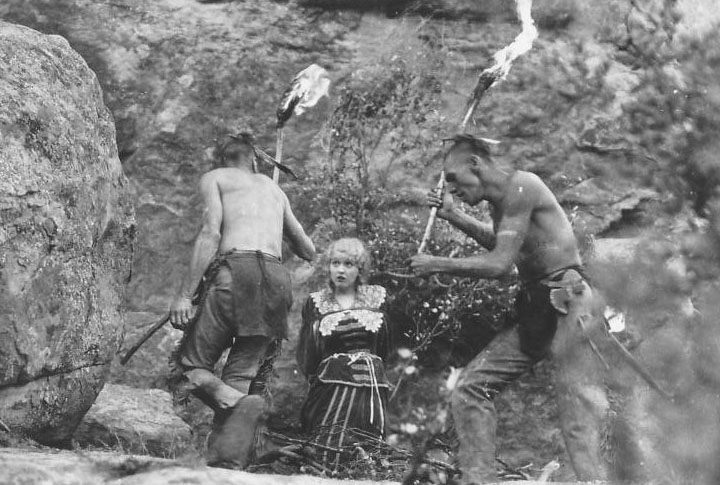 Above: Lucile Browne in danger in The Last of the Mohicans (Mascot, 1932).

Lucile played some supporting roles in higher-budgeted films (including Laurel and Hardy’s The Devil’s Brother and the William Powell comedy Double Harness) and co-starring parts in low-budgeted features (like the Ken Maynard B-western King of the Arena), and then returned to serials in 1933. Her next cliffhanger, The Mystery Squadron (Mascot, 1933), starred Bob Steele as Fred Cromwell, a pilot hired to investigate the attacks of a murderous and mysterious group of flyers on a dam construction project. Browne was Dorothy Gray, the feisty daughter of the dam contractor, Stephen Gray (Lafe McKee). Though Dorothy initially suspected Cromwell and his pal Bill Cook (Guinn “Big Boy” Williams) of being members of the “Mystery Squadron,” this misunderstanding was soon cleared up, and she cooperated with the two pilots’ attempts to run down the Black Ace, the enigmatic leader of the Squadron. Mystery Squadron was a fast-paced and highly entertaining serial, with an enthusiastic and colorful cast and many inventive action scenes. The energetic Lucile paired well with the equally energetic Steele, and got to exhibit her trademark pluck in several scenes, particularly the sequence in which, after apparently being trapped, she resolutely rammed through a barn door in her car and raced to save Steele and Williams from a lynching at the hands of the misinformed construction crew.

Above, from left to right: Guinn “Big Boy” Williams, Lucile Browne, and Bob Steele in The Mystery Squadron (Mascot, 1933).

Above: The mysterious Black Ace has hijacked Lucile Browne’s plane in this scene from The Mystery Squadron.

Browne’s final cliffhanger was Mascot’s The Law of the Wild, released in 1934. This modern-day Western serial was one of a series of Mascot cliffhangers built around animal stars Rex the Wonder Horse and Rin Tin Tin Jr. The human hero was former silent star Bob Custer, who tamed the wild and free-roaming Rex, only to have him stolen by treacherous cowboy Richard Alexander. To make matters worse, a gang of racetrack crooks then stole Rex and tried to frame Custer for the murder of Alexander (actually committed by Alexander’s own henchman Edmund Cobb). Lucile played Alice Ingram, the sympathetic and plucky daughter of a local rancher (Lafe McKee); she teamed with Custer and his canine pal Rinty to recover Rex, worked tirelessly to clear Custer of the murder charge, and even wound up riding Rex in the chapterplay’s climatic race. Law of the Wild was a likable but somewhat low-key cliffhanger–although still filled with plenty of stunts and chases–and was materially boosted by Browne’s performance. Since two of Lucile’s co-stars couldn’t talk, and the third, Bob Custer, seemed somewhat at sea in a sound film, she had to rely on her own engaging personality to carry many of the dialogue scenes. Fortunately, she met this challenge easily, and her character’s convincing concern for Custer’s plight helped the audience to care more about her rather wooden and uncharismatic co-star.

Above: Slim Whittaker (left) and Ernie Adams threaten Lucile Browne in The Law of the Wild (Mascot, 1934).

Above: Bob Custer and Lucile Browne in The Law of the Wild.

Lucile played several more leading roles in various B-movies throughout the 1930s; her final turn as a heroine was in the 1937 Tom Tyler B-western Cheyenne Rides Again.  She continued to live in Hollywood with her husband James Flavin, who had found his niche in films as a character actor, usually playing gruff policemen or other hard-boiled types. She made a handful of film appearances in the 1940s, and concluded her screen career with an uncredited bit in the 1950 Margaret Sullavan drama No Sad Songs for Me. She then enjoyed a long and happy family life until her husband passed away in April 1976. Following his death, she went to live with relatives in Virginia, where she died about a month later.

Lucile Browne was the first actress of the sound era to be dubbed a serial queen by the Hollywood trade papers, which also compared her to silent-era heroines like Pearl White. Lucile was certainly deserving of such comparisons, and it’s unfortunate that her fame has been eclipsed among present-day fans by that of her successors. The first five years of the sound serial era contain many chapterplays that are neglected by today’s fans, but those cliffhangers feature many appealing moments and interesting performers, chief among them the adorably spunky Lucile Browne.

Above: Lucile Browne, with her on-and-off-screen leading man James Flavin, in The Airmail Mystery (Universal, 1932).

Acknowledgements: The Old Corral’s page on Lucile Browne (and the links it gathers together) provided me with much of the biographical information in this piece.