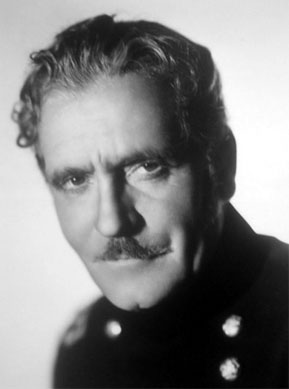 Above: A  publicity portrait of Ralph Morgan from the 1936 Hal Roach feature General Spanky.

Distinguished in appearance, with a graying hair and a square jaw, character actor Ralph Morgan was well-equipped to play grave and thoughtful authority figures–which he frequently did in the course of his movie career. However, his respectable looks concealed a talent for playing angry and downright maniacal villains, characters that seemed absolutely consumed with demented rage.  His serial career was brief, but in the course of it he created two excellent cliffhanger villains, one of whom–Dr. Mortis in Universal’s Gang Busters–ranks as one of the greatest heavies in any sound serial.

Ralph Morgan was born Raphael Kuhner Wuppermann in New York City. His affluent parents had intended him for a law career, but he developed a much stronger interest in acting during his youth. After graduating Columbia University, he only spent a year or two in the legal field before beginning a career on the New York stage in 1908. Adopting Ralph Morgan as a stage name, young Wupperman quickly became a prominent performer on Broadway, and by 1920 had become active in Equity as well, serving as the union’s interim president in 1924.  Morgan appeared in only a handful of films during the silent era, most of them New-York-filmed features or Hollywood films featuring his younger brother Frank Morgan–who had gone to Hollywood around 1917 and would become a major character actor in the 1930s and 1940s, achieving his greatest fame as the title character in MGM’s The Wizard of Oz. The arrival of talkies created a demand for vocally proficient stage-trained actors in Hollywood, and Morgan followed his brother there to stay (for a while) in 1931. Morgan was most frequently cast as sympathetic characters in films for MGM, Fox, and other studios during the early 1930s, among them the well-meaning but doomed Czar Nicholas II in Rasputin and the Empress (1932), Charlie Marsden in MGM’s adaptation of Eugene O’Neill’s Strange Interlude, and the understanding friend of unhappy industrialist Spencer Tracy in The Power and the Glory, a film told via flashbacks by Morgan’s character. In 1933, Morgan’s Equity experience led to his selection as the first president of the newly-formed Screen Actor’s Guild. He held this position for a year, later returning to it for two more years (1938-1940), and in the interim remained a busy member of the Guild–which apparently caused his screen career to taper off somewhat. However, he kept appearing in at least five or six features a year for the rest of the 1930s; by now the studios had discovered his talent for playing villains and began to capitalize on it, although he still continued to play kindly figures as well. It was often hard to be sure whether Morgan, when appearing in 1930s whodunits like The Star of Midnight and The Ex-Mrs. Bradford, would prove the respectable fellow he seemed to be or would be exposed as a ruthless killer in the final reel. His films yearly became fewer as the 1930s drew to an end, and those movies he did appear in were typically B-pictures–albeit rather highly-budgeted ones–like Out West With the Hardys and The Lone Wolf Spy Hunt.

1941 saw Morgan in his first serial, Republic Pictures’ Dick Tracy vs. Crime Inc.  The last and probably the best of the studio’s four Dick Tracy cliffhangers, Crime Inc. pitted Ralph Byrd as Tracy against a master criminal known as the Ghost. The Ghost was out for revenge on Tracy and his allies the Council of Eight, a anti-crime group made up of wealthy and respectable citizens who had helped Tracy to send the Ghost’s gangster brother to the electric chair. The villain’s systematic vengeance on the Council was helped by his use of an invisibility device, and by the fact that he was secretly a Council member and thus privy to Tracy’s plans. Morgan did the voice of the masked Ghost, and also played a Council member named J. P. Morton–who was, not surprisingly, revealed as the Ghost in the final chapter. Morgan, who had played many similar parts in mystery features, excelled in his double role. He made the Ghost seem vengeful to the point of insanity, furiously snarling out threats against the Council–while simultaneously making the villain seem shrewd and intelligent. Morton he played as a timid but somewhat pompous character, amusingly mimicking many of his brother Frank’s mannerisms.

Above: Disguised as a prison psychiatrist, Ralph Morgan gains access to one of his captive henchmen in Dick Tracy vs. Crime Inc. This lobby card is for the reissue version, which was retitled Dick Tracy vs. Phantom Empire.

In the early 1940s, Morgan had resumed his Broadway career, but he would continue to work fairly steadily in pictures for at least the first half of the decade. Much of his screen work during this time was at Universal Pictures, and one of his earliest Universal assignments was the role of the villain in the studio’s 1942 cliffhanger Gang Busters. He was cast as Dr. Maxton, a mad scientist out to avenge himself on the policemen (led by hero Kent Taylor) and city officials who had once caused him to be arrested for illegal experimentation. Using the name of “Dr. Mortis,” he recruited a “League of Murdered Men”–criminals who had apparently died but who were resuscitated and kept alive by a weird drug–and used them to wreak havoc on police and citizenry, while broadcasting demands for the city authorities’ mass resignation. Well-written, well-paced, and very atmospheric, Gang Busters was one of the very best serials Universal ever made, and Morgan’s performance as the twisted Mortis was the serial’s centerpiece. He delivered most of his lines in a soft but insinuatingly menacing tone, tauntingly reminding his henchmen of the power he held over them and delivering his ultimatums to the authorities with quiet relish; he also displayed convincing rage when ranting about his “wrongs” at the hands of the law. Morgan played the part with an almost demonic energy that contrasted strangely with his venerable appearance; Mortis looked like a frail old grandfather, but seemed as dangerous as a man-eating tiger.

Above: Ralph Morgan prepares to induct Kent Taylor (offscreen) into the “League of Murdered Men” in Gang Busters (Universal, 1942).

Above: The seated Ralph Morgan is flanked by his henchmen in Gang Busters.  From left to right: John Gallaudet, William Haade, Vic Zimmerman, and Ralf Harolde.

Morgan continued to appear in medium-budget films for the next several years–principally Universal horror or mystery films like The Night Monster and Weird Woman. In 1944, he appeared in another Universal serial, The Great Alaskan Mystery, this time cast in a sympathetic role as Dr. Miller, the father of heroine Marjorie Weaver. Alaskan Mystery was a slow-moving but interesting serial, uplifted by its strong cast, Morgan chief among them. His Dr. Miller was the creator of the serial’s “MacGuffin,” a matter-transmitting ray called the Peratron, which was coveted by Nazi agents on account of its latent destructive powers and protected by Alaskan miner Milburn Stone. Morgan’s part was relatively mundane compared to his villainous roles, but he brought some added depth to the stock part of the “heroine’s scientist father” by playing the good doctor’s absent-mindedness and idealism to the hilt; his moodily heartbroken reaction when he discovered his invention’s unexpected capacity for destruction was quite moving.

Above: Milburn Stone and Ralph Morgan in The Great Alaskan Mystery (Universal, 1944).

Morgan’s final serial was The Monster and the Ape (Columbia, 1945). This slow-moving and weakly-scripted serial featured Morgan as Professor Frank Arnold, the inventor of a robot called the Metallogen Man that was pursued by evil scientist Dr. Ernst (George Macready), who enlisted the aid of a murderous trained gorilla. Monster and the Ape had little to recommend it but a few well-done action sequences and some assured performances; Morgan’s underwritten role was a real comedown from his parts in Dick Tracy vs. Crime Inc., Gang Busters, and even Great Alaskan Mystery, but he went through his paces with smooth aplomb, albeit little of the energy he had shown in his earlier serial vehicles.

Above: Ralph Morgan demonstrates his robot for a flabbergasted Willie Best in The Monster and the Ape (Columbia, 1945).

The aging Morgan made only about a dozen more film appearances after Monster and the Ape, playing both villains and patriarchal types in B-westerns and B-mysteries for Columbia, Monogram, and Republic–and in occasional MGM features like Song of the Thin Man. He made his final movie appearance in Monogram’s 1952 prospecting adventure Gold Fever, playing a leading role as a grizzled prospector who made a poignant departure at the end of the film; the part served as his Hollywood farewell. He would retire to New York shortly afterwards, occasionally working on stage or appearing in New York-based television series like Celanese Theatre; he passed away in New York City  in 1956.

Whether playing a mad scientist, a vicious master criminal and his mousy alter ego, or an idealistic inventor, Ralph Morgan performed his serial roles with all the attention-getting but subtle skill he had brought to his more prestigious work in features and plays. While today he is remembered by film buffs for his work in major 1930s features and by actors for his founding role in SAG, the serial fan thinks of him first for his fine cliffhanger characterizations, chief among them Dr. Mortis in Gang Busters, perhaps the most memorable of all the genre’s certifiably mad scientists.

Above: Announcing himself as “the Voice of Death,” Ralph Morgan makes a menacing nighttime radio broadcast in Gang Busters (Universal, 1942).

Acknowledgments: For much of the biographical information in this article, I’m indebted to the SAG’s (Screen Actor’s Guild) online biography of Ralph Morgan.