Above: Wild Bill Elliott in a publicity still for the serial that gave him his screen nickname, The Great Adventures of Wild Bill Hickok (Columbia, 1938).

One of the most popular cowboy stars of the sound era, Wild Bill Elliott owed much of his success to the exceptionally strong and distinctive screen personality he created for himself. He played his Western heroes with such a skillful balance of craftiness, determined honesty, icy grimness, and quiet humorousness that they seemed much more hard-edged and dangerous than the average matinee cowpoke, but at the same time came off as appealingly good-natured and unquestionably heroic. Elliott first established this unique persona in a movie serial, The Great Adventures of Wild Bill Hickok–the first of three chapterplays in which he starred for Columbia Pictures.

Bill Elliott was born Gordon Nance in Pattonsburg, Missouri. The son of a rancher, he learned to ride not too long after he learned to walk, and was appearing in local rodeos by the time he was sixteen; he also developed an interest in cowboy movies at an early age, and became determined to follow in the footsteps of silent Western star William S. Hart, whose films combined cowboy heroics with understated drama. He headed for California as soon as he graduated from college, and got his acting start with the Pasadena Playhouse theater group; he first broke into movies in 1925, adopting “Gordon Elliott” as his stage name. However, Western stardom proved elusive for Elliott; most of his movie roles during the latter half of the 1920s and the first half of the 1930s were bit parts–and hardly any of them were cowboy parts; instead, he was repeatedly cast as playboys, nightclub patrons, high-society partygoers, and other over-civilized types. Though he played a scattering of noticeable supporting roles during this period, his credited parts didn’t start to outnumber his uncredited bits until 1935, when he began taking prominent supporting roles in Warner Brothers’ B-mysteries, B-Westerns, and B-comedies. Elliott almost invariably played slick and unsympathetic characters in these Warners features, and remained typed as a nasty slicker when he took featured parts in B-movies for Fox, Republic, Universal, and other studios over the next few years.

By 1938, Elliott seemed to be fairly embarked on a career path similar to those followed by Bradley Page, George Meeker, and other frequent B-film scoundrels; however, his career happily took a sharp new turn in that year, when a Columbia Pictures executive, recalling one of Elliott’s few non-villainous Warners turns (a supporting performance as an undercover lawman in the Dick Foran B-western Moonlight on the Prairie), recruited him for the title role in the Columbia chapterplay The Great Adventures of Wild Bill Hickok. This unusually high-budgeted serial was somewhat disjointed but highly entertaining, a large-scaled Western saga in which the famed lawman Hickok took on a powerful outlaw gang called the Phantom Raiders–battling them in the streets of Abilene while also thwarting their efforts to destroy a cattle drive on the Chisholm Trail. Elliott proved an ideal anchor for this sprawling epic; finally given the Western-hero role he’d sought for over ten years, he took center stage and held it firmly throughout the serial–facing off with gunslinging villains in intimidatingly cagy and steely fashion, encouraging beleaguered pioneers with blunt straightforwardness, and affably but politely interacting with the fumbling townsmen and eager frontier kids who variously served as his sidekicks. He also made his first use of two gimmicks that would become his trademarks for years to come: wearing his guns butt-forward, and self-deprecatingly describing himself as a “peaceable man” before or after mowing down villains. 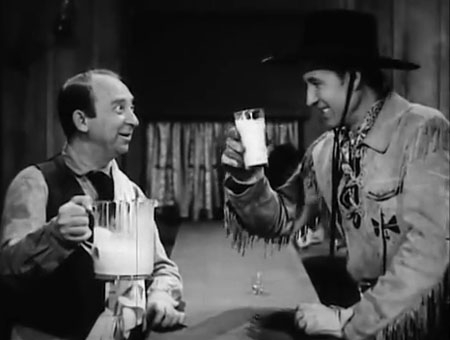 Above: Bill Elliott cheerfully toasts Roscoe Ates with a glass of milk in The Great Adventures of Wild Bill Hickok (Columbia, 1938). 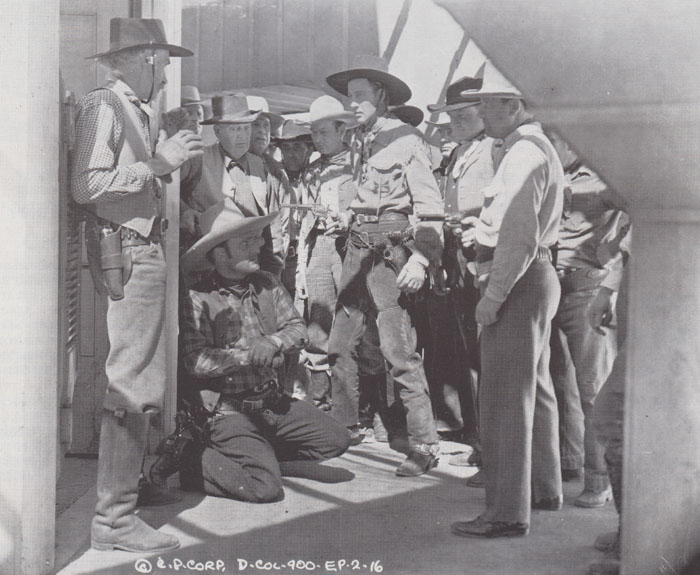 Above: Backed by Abilene citizens, Bill Elliott stands off a bunch of outlaws in Great Adventures of Wild Bill Hickok; Art Mix is the wounded badman kneeling at bottom.

Columbia realized that a star had been born in The Great Adventures of Wild Bill Hickok, and quickly started providing Elliott with additional film vehicles. Redubbed Bill Elliott, in order to capitalize on the Hickok serial’s success, he starred in a quartet of B-westerns for the studio in late 1938 and early 1939, and followed these features with a second Columbia serial, 1939’s Overland With Kit Carson. A quasi-historical and high-budgeted epic obviously modeled on Hickok, Carson was an impressive production, but didn’t showcase its star as effectively as the earlier serial had. Most of Carson’s action centered around enormous battles between Kit Carson’s squad of mountain men and the “Black Raiders,” led by the mysterious would-be frontier dictator Pegleg; Elliott’s Carson was too often relegated to merely shouting orders during these mass conflicts, depriving Elliott of the chance to engage in the intense one-on-one showdowns that had been one of the hallmarks of Hickok. Still, Elliott’s strong screen presence still kept him from ever getting lost in the shuffle of Carson’s big-scale action; his toughly determined but exceedingly canny demeanor proved an excellent fit for the part of the great scout Carson. 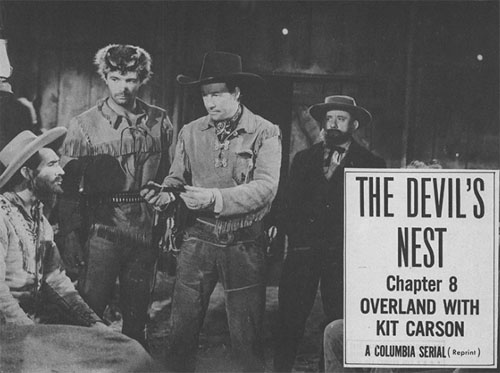 Above: Bill Elliott questions Trevor Bardette (far left) in a lobby card for Overland With Kit Carson (Columbia, 1939), as James Craig (in coonskin cap) and Francis Sayles look on.

Above: Bill Elliott gets the drop on Jack Rockwell in Overland With Kit Carson.

After Overland With Kit Carson’s completion, Elliott spent the years 1939 to 1942 starring (first singly, than in tandem with Tex Ritter) in a long string of well-written Columbia B-westerns–several of which (particularly Across the Sierras) allowed him to balance standard derring-do with genuine character moments; in most of these features he either reprised his Wild Bill Hickok role or played a character called Wild Bill Saunders. In 1942 Elliott’s contract with Columbia, signed in the wake of the Bill Hickok serial, was about to run out, and he decided to move over to Republic Pictures once it expired; Columbia had refrained from making any more Elliott serials while he was starring in their Western features, in order to avoid undercutting said features’ profits–but, when they realized they were about to lose him anyway, they cast him in one final chapterplay, The Valley of Vanishing Men (Columbia, 1942). Cheaply-produced in comparison with Elliott’s first two serials, Vanishing Men was nevertheless a solid and entertaining outing; Elliott was cast as Wild Bill Tolliver, a former Confederate officer who went in search of his missing prospector father and wound up tangling with the ambitious outlaw leader Kincaid (Kenneth MacDonald), who’d stolen the elder Tolliver’s valuable gold mine and was enslaving local settlers to work it. Though his Vanishing Men role was more simplistic than the B-western parts he’d been playing for the last three years, Elliott nevertheless handled it with aplomb–pursuing his search for his father with properly grim determination, coolly but threateningly confronting the various villains who got in his way, and reacting with amusing wryness to the antics of his comic sidekick Slim Summerville.

Above: A disgusted Bill Elliott confronts an incompetent sheriff (Michael Vallon, in suit) and a belligerent deputy (Roy Barcroft, far left) in The Valley of Vanishing Men (Columbia, 1942). Slim Summerville is next to Elliott.

Above: Bill Elliott rides to the rescue through a herd of stampeding cattle in Valley of Vanishing Men.

Elliott made his planned move to Republic in 1943, and was immediately given a B-western series there, in which he played (and was billed as) “Wild Bill Elliott.” This series gave way to a new one in 1944, when Republic cast Elliott as the famous comic-strip cowboy Red Ryder; he continued to star in Ryder B-westerns until late 1946, when Republic promoted him to bigger-budgeted Westerns. Now billed as “William Elliott,” he starred in Republic’s A-features up through 1950, receiving multiple opportunities to stretch his acting muscles in mature and dramatic Westerns such as Wyoming, Hellfire, and The Showdown. Frustrated by Republic boss Herbert Yates’ budget-cutting on the last-named film, he moved over to Monogram Pictures (later Allied Artists) in 1951, and began co-producing his own movies there. He continued to star in good “adult Westerns” at Monogram/Allied Artists until 1954, when television competition compelled the studio to stop making medium-budgeted Westerns. Elliott finished out his movie career as the star of a quintet of Allied Artists police-detective films, released from 1955 to 1957; after appearing in the last of these features, Footsteps in the Night, he retired to a ranch near Las Vegas, where he passed away in 1965.

Wild Bill Elliott’s contract, when he first signed with Republic, specifically exempted him from making serials–which effectively demonstrates that his sights were set not on matinee action-hero stardom, but on a career as a more multi-faceted cowboy star like his role model William S. Hart. However, though Elliott probably regarded his serials as little more than a stepping-stone, he would undoubtedly have been the first to admit that his inaugural chapterplay, The Great Adventures of Wild Bill Hickok, was the film that jumpstarted his previously pedestrian career, and directly led to his eventual achievement of his Hollywood goals. Serial buffs, for their part, would readily admit that Elliott was as good to the chapterplay genre as it was to him; his magnetic performances greatly enhanced each of his three serials–particularly Hickok, which emerged as Columbia’s greatest Western chapterplay, thanks in part to Elliott’s star-making turn in the title role.

Above: A deceptively calm and polite Bill Elliott is about to make the first of many quick switches from “peaceable man” to deadly gunfighter, as he faces a belligerent off-camera outlaw in his introductory scene in The Great Adventures of Wild Bill Hickok (Columbia, 1938).

Acknowledgments: Paul Dellinger’s piece on Bill Elliott at the Old Corral provided most of the above biographical information; the interesting tidbit about the influence of Elliott’s Moonlight on the Prairie role on his casting in the Bill Hickok serial came from Bob Herzberg’s book Hang ‘Em High: Law and Disorder in Western Films and Literature (McFarland, 2013).