Above: A publicity portrait of Noah Beery Jr., circa 1940.

Noah Beery Sr. typically played villains, while Wallace Beery was usually cast as lovable rogues. Noah Beery Jr., son of the former and nephew of the latter, specialized in another type of characterization, that of the genial, easygoing “regular fella.” During his distinguished character-acting career in film and television, Beery Jr. delivered many first-rate portrayals of cheerful bumpkins and working stiffs, mixing comic naivety with a rustic shrewdness. The serial genre gave Beery most of his major early roles, and in his cliffhangers he perfected the ingratiating persona that would serve him throughout his career.

Noah Beery Jr. was born in New York City, while his father was working on Broadway. As a child, he played some roles on stage opposite his father before the Beery family relocated to Hollywood, where young Noah made his screen debut with a bit in 1920’s Mark of Zorro (which featured his father in a key role). Shortly afterwards, Beery Jr. was enrolled in Harvard Military Academy, but he returned to movie work after completing school in the early 1930s, beginning with a few small parts opposite his father (Renegades) and uncle (The Big House). Although he had little movie experience, the Beery family name guaranteed him immediate audience recognition, and Universal Pictures quickly took advantage of his marquee appeal by giving him his first notable role in their exciting 1932 serial Heroes of the West.

Heroes of the West featured Beery as Noah Blaine, the son of a pioneering railroad contractor who aided his father against Indians and outlaws bent on halting the railroad’s advance. Beery was more of a co-hero than a sidekick in Heroes, equally sharing fighting and rescuing duties with Onslow Stevens as the rail crew’s surveyor. Already, Beery’s screen personality was noticeable; his character was supposed to be a tenderfoot who was quickly picking up the ways of the West, and he gave the role  a blend of boyish enthusiasm and canny resourcefulness that suited it well.

Above, from left to right: Jacqueline Wells, Onslow Stevens, and Noah Beery Jr. in a publicity still for Heroes of the West (Universal, 1932).

Beery was featured in a second Universal serial the same year, The Jungle Mystery. This cliffhanger starred Tom Tyler as adventurer Kirk Montgomery and Beery as his pal Fred Oakes; the two explorers helped heroine Cecilia Parker search for her missing brother in the wilds of Africa and battled a gang of Russian ivory thieves. Unfortunately, Jungle Mystery is one of several sound serials that has remained unavailable since its original release; a print exists in the Universal vaults, but until it becomes available, it’s not possible to comment further on what seems to have been Beery’s first full-fledged sidekick role in a serial.

After playing a major supporting role in Rustlers’ Roundup, one of Universal’s Tom Mix western features, Beery was signed by Mascot Pictures’ boss Nat Levine to appear in two fast-paced 1933 chapterplays, The Three Musketeers and Fighting With Kit Carson. The first (a Foreign Legion thriller) cast him as Stubbs, the chipper mechanic pal of pilot hero John Wayne; the unfortunate Stubbs was killed early on by the evil Arab leader El Shaitan, allowing Beery to do an excellent death scene. His role in Fighting With Kit Carson was much larger; he played Nakomas, a young Indian chief who went on the warpath against the settlers when his father was murdered by outlaws–but was persuaded to make peace by hero Johnny Mack Brown, subsequently joining Brown in his fight against the badmen really responsible for his father’s death (the leader of these badmen, incidentally, was none other than Noah Beery Sr.). Though not entirely convincing as an Indian, the younger Beery was quite likable in his role, balancing stoic toughness with cheerful energy. 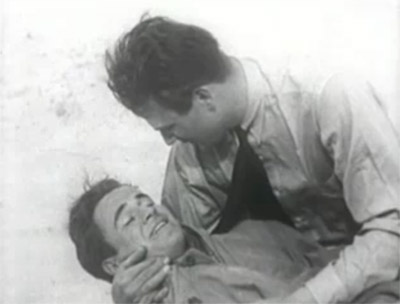 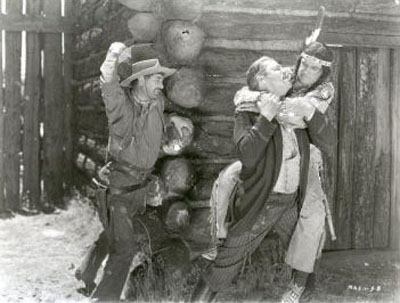 Beery re-teamed with John Wayne, playing the Duke’s sidekick in the Monogram B-western Trail Beyond, and then returned to Universal for the 1934 serial Tailspin Tommy (1934). Beery was cast as “Skeeter” Milligan, a small-town garage mechanic and loyal friend to fellow-mechanic Tommy Tompkins (Maurice Murphy). Skeeter helped Tommy realize his dream of becoming a pilot and became an aviator himself in the process; the fledgling flyers also helped defeat the schemes of unscrupulous airline proprietor John Davidson. Based on Hal Forrest’s comic strip, Tommy was an extremely enjoyable serial, and Beery was excellent in his first full-fledged “comic relief” role, slowly and amusingly figuring out airport practices and unabashedly singing the praises of his embarrassed buddy Tommy. Skeeter’s awkwardness and unsophistication provided plenty of laughs in the serial, but Beery made the mechanic seem like a believable and likable character, not a buffoonish caricature.

Above: Maurice Murphy (left) and Noah Beery Jr. introduce themselves to the offscreen Patricia Farr in Tailspin Tommy (Universal, 1934). 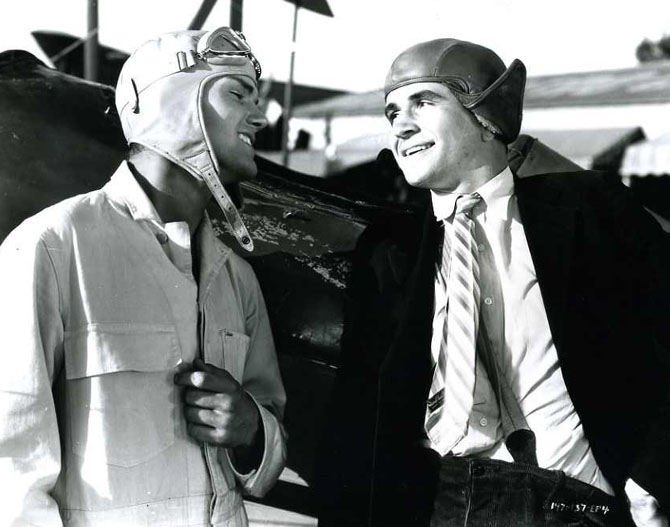 Above: Maurice Murphy and Noah Beery Jr. in another scene from Tailspin Tommy.

In 1935, Beery ventured into starring roles, playing leads in B-films like Universal’s Stormy and Sunset Productions’ Five Bad Men. He also played the lead in the 1935 Universal serial Call of the Savage. Based on a series of magazine stories, Savage starred Beery as Jan Trevor, a young boy who grew up in the jungle after being separated from his scientist father. Fifteen years later, Jan was targeted by two unscrupulous colleagues of his father’s, who hoped to use him to obtain a valuable formula the elder Trevor had been working on. The jungle “wild boy” eluded the evil scientists and eventually reunited with his father; he also fell in love with heroine Dorothy Short and helped her reclaim her rightful place as the princess of the lost city of Mu. Call of the Savage was a good pseudo-Tarzan adventure, and Beery–in best Tarzan tradition–had plenty of action scenes but relatively little dialogue. However, he used the same ingenuous enthusiasm he brought to his sidekick parts to convincingly convey Jan’s uneducated but good-natured wildness.

Above: Harry Woods, Dorothy Short, and Noah Beery Jr. in Call of the Savage (Universal, 1935).

Tailspin Tommy in the Great Air Mystery (Universal, 1935) returned Beery to the role of Skeeter Milligan. In this outing, Skeeter and Tommy (now played by Clark Williams) took on an aerial surveying job in the South American island nation of Nazil, and promptly got involved in a civil war between the army of the island’s benevolent ruler and the followers of his scheming half-brother. Great Air Mystery was just as entertaining as the first Tailspin Tommy serial, its aviation action enlivened by the exotic milieu. Beery’s Skeeter still provided some comic moments, but was more shrewd and self-assured than in the previous serial; thanks to Beery’s comic but recognizably human characterization in the first Tommy outing, this alteration seemed like a logical maturation of Skeeter’s personality and not an arbitrary change. 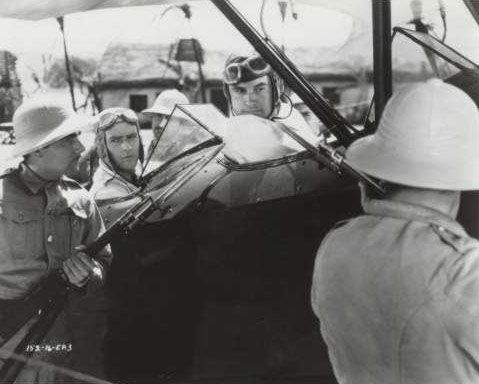 Above: Clark Williams and Noah Beery Jr. are confronted by rebel soldiers in Tailspin Tommy in the Great Air Mystery (Universal, 1935).

Ace Drummond (Universal, 1936) marked a temporary close to Beery’s serial career. Drummond starred John King as the title hero, a pilot/investigator who was sent to Mongolia to protect an international airline from the attacks of a mystery villain known as the Dragon. Beery played Jerry, Drummond’s trusty mechanic, who got into some comic scrapes through his unfamiliarity with Mongolian customs but was helpful at need–even saving the day in the final chapter by wiping out the Dragon’s fighter squadron with a ray machine. Ace Drummond was a colorful and well-made serial, with a good cast; Beery’s character seemed like a more seasoned version of Skeeter Milligan, and he played the part with the same flair he had shown in the Tailspin Tommy serials.

Above: Noah Beery Jr. and Jackie Morrow assist John King after a bombing in Ace Drummond.

Universal was apparently impressed with Beery’s serial performances, and cast him in many of their medium-budget features (The Mighty Treve, Forbidden Valley, The Road Back) over the next two years. In 1939, he broke into bigger features for the first time, playing noticeable roles in Howard Hawks’ Only Angels Have Wings at Columbia and Of Mice and Men at Hal Roach Studios. As the 1940s began, Beery continued playing major and minor character roles in both B-films (Carson City Kid, The Light of Western Stars) and A-movies (20 Mule Team, which starred his uncle Wallace, and Sergeant York). In 1941, he returned to cliffhangers and appeared in Riders of Death Valley, an excellent Western serial with a much-publicized all-star cast that included Dick Foran, Buck Jones, Charles Bickford, and Lon Chaney Jr. However, Beery received short shrift in this outing, despite prominent billing; as Smoky, one of the vigilante group led by heroes Foran and Jones, he had only a few lines, and was either kept offstage or shunted to the background throughout the serial.

Universal’s 1942 cliffhanger Overland Mail gave Beery a much better role–appropriately, since it would prove his final chapterplay. One of the studio’s best Western serials, Mail featured Lon Chaney Jr. as a frontier scout investigating Indian attacks on a beleaguered frontier stage line. Beery played Sierra Pete, Chaney’s happy-go-lucky sidekick, who provided Chaney with plenty of assistance in tracking down the stagecoach raiders. (The leader of the raiders, incidentally, was Noah Beery Sr. as Frank Chadwick). Beery Jr., by now an old hand at such roles, grinned and drawled his way through the part of Sierra, providing measured comic relief without ever turning the character into a clown. 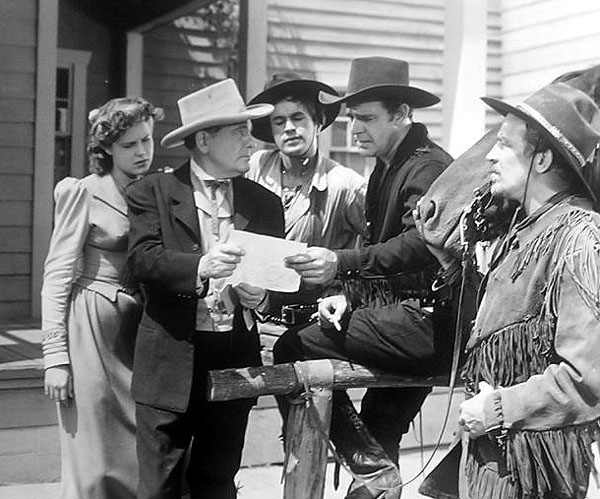 Above: Lon Chaney Jr. and Noah Beery Jr. battle a band of phony Indians in Overland Mail. Charles Stevens is being throttled by Chaney while Carleton Young is about to clobber the hero. Beery Jr. is slugging Ethan Laidlaw while grappling with Riley Hill.

The 1940s saw Beery permanently abandoning his occasional leading roles to pursue a career as a character actor in movies ranging from the war film Gung Ho to the famed Howard Hawks Western Red River. He continued his feature work into the 1950s, concentrating chiefly on supporting roles in A-westerns like Two Flags West, The Last Outpost, and The Texas Rangers. In 1957 he became a regular (as a clown in a frontier carnival) on the short-lived television show Circus Boy; the 1960s would find him working almost exclusively on television–appearing on Rawhide, Gunsmoke, Lassie, and many other shows. In 1974, after occasional feature film parts, many more TV guest appearances, and two other co-starring roles on short-lived TV shows (first mate Bill Blake on Riverboat in 1960 and veteran scout Buffalo on Hondo in 1967), he landed the plum part of James Garner’s ex-trucker father on the private eye show The Rockford Files. Rockford ran until 1980; after its conclusion, Beery worked in film and TV for another six years, taking on one more recurring role (that of a grizzled cowhand) on one more short-lived (1983-1984) TV show, the modern-day Western soap opera Yellow Rose. His final film big-screen appearance was in a 1982 drama called Waltz Across Texas, and he concluded his television career with a guest appearance in a 1986 episode of The Love Boat. Throughout his acting career, Beery had devoted part of his time to ranching in Tehachapi, California, and in 1986 he retired permanently to his ranch, passing away there in 1994.

Noah Beery Jr. spent over fifty years as a screen character actor, surpassing his father’s fame and rivaling his uncle’s in the process. Beery’s serial vehicles were pivotal to the development of his acting career; they not only gave him his first exposure to audiences, but helped him to develop the comical but folksily-wise screen personality that would endear him to several subsequent generations of movie and TV viewers.

Above: Noah Beery Jr. with James Garner in a publicity still for The Rockford Files.

Acknowledgements: I am indebted to Jim Beaver’s Internet Movie Database of Noah Beery Jr. for this article’s biographical information.