Above: A Warner Brothers publicity portrait of Eddie Acuff, circa 1938.

Eddie Acuff, in a Hollywood character-acting career that spanned the 1930s and 1940s, specialized in playing cabbies, reporters, and other sharp-witted, impudent types. In big or small roles, Acuff usually combined fast-talking self-assurance with a sly but good-natured sense of humor, to amusing effect. During his career, Acuff served as sidekick in several serials, injecting wry humor into his roles without descending to slapstick bumbling; his flippant, slightly cocky persona made him an ideal comic counterpoint to his more serious cliffhanger costars. At the same time, he made his characters seem intelligent and responsible enough to be believable when they took part in no-nonsense action.

Eddie Acuff was born in Caruthersville, Missouri. His uncle, a former Mississippi riverboat entertainer, apparently influenced his decision to pursue an acting career. The Internet Broadway Database has him appearing in Broadway plays by 1932, and we can probably assume he spent some time in off-Broadway stage venues between finishing school and arriving in New York. After spending two years on the New York stage, he came to Hollywood in 1934, where he apparently signed a contract with Warner Brothers. He would work steadily for that studio over the next four years, playing bits and small character roles in their bigger films (I Found Stella Parish, The Petrified Forest) and major roles (typically as brash but cagey sidekicks) in B-pictures like the Dick Foran western Guns of the Pecos and the B-crime movie Love is on the Air (Ronald Reagan’s first starring film). Acuff left Warners in 1938 and began to freelance, playing a similar array of chipper, hustling types in B-movies for Republic, RKO, Columbia, Universal and other studios. His first serial was Universal’s The Phantom Creeps, a 1939 sci-fi cliffhanger that was largely a vehicle for Bela Lugosi as a mad scientist named Dr. Zorka. Robert Kent, as the Military Intelligence hero tracking down Lugosi, was somewhat overshadowed by the villain, and Acuff, as one of Kent’s operatives, was in turn overshadowed by Kent, leading lady Dorothy Arnold , and Kent’s chief assistant Regis Toomey. Acuff’s character, Mac, was little more than a background presence throughout the serial, although he did give characteristically humorous touches to a few scenes–jumpily complaining about having to stand guard on a spooky abandoned house, or reacting with irritated confusion when outfoxed by the temporarily invisible Lugosi.

Above: Eddie Acuff tries to explain his slugging at the hands of an invisible man to Roy Barcroft in The Phantom Creeps (Universal, 1939).

Universal gave Acuff a bigger serial role the following year, in The Green Hornet Strikes Again. This well-done cliffhanger featured Acuff as Lowery, the star reporter of the Daily Sentinel. Lowery provided valuable assistance to Sentinel  editor Britt Reid (Warren Hull) in Reid’s fight against a city-wide crime syndicate, but, like most of the other characters in the serial, was unaware that Reid was also the masked crime-fighting outlaw called the Green Hornet. Acuff was perfectly cast as the wisecracking, go-getting Lowery, and livened up many of the serial’s scenes, particularly in his interactions with irritable fellow-reporter Wade Boteler.

Above: Eddie Acuff and Warren Hull in The Green Hornet Strikes Again (1940). 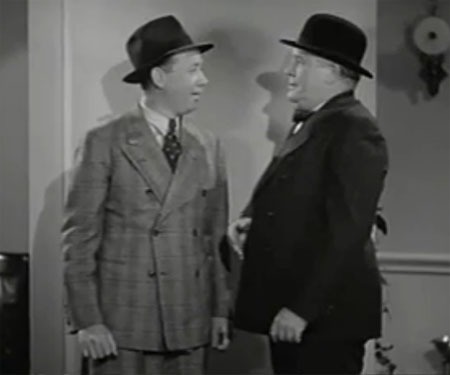 Acuff appeared in his third serial, Republic Pictures’ Jungle Girl, in 1941. This memorably colorful thriller gave Acuff his best chapterplay part as Curly Rogers, the trusty mechanic and co-pilot of pilot hero Jack Stanton (Tom Neal); the two aviators helped jungle-raised beauty Nyoka Meredith (Frances Gifford) to unmask the murderers of her physician father and thwart the villains’ designs on a native tribe’s cache of sacred diamonds. Acuff’s role in Jungle Girl allowed him to crack plenty of jokes and engage in amusing grumbling, but also permitted him to be toughly stalwart and quietly heroic; he handled both the funny and serious sides of his role well, and easily switched from one aspect of his personality to the other without ever seeming out of character. 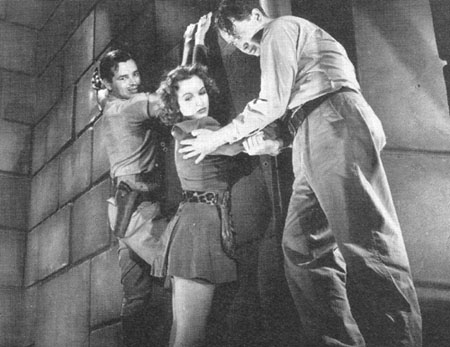 Above: Eddie Acuff assists Frances Gifford as she and Tom Neal cling to a temple wall above a collapsing floor in Jungle Girl (Republic, 1941).

Above: Tom Neal and Eddie Acuff release Frances Gifford from a sacrificial altar in Jungle Girl.

Acuff remained busy in features while appearing in his cliffhangers; although his roles in A and B features began to shrink in size as the 1940s advanced, he did land a recurring role as a hospital orderly in MGM’s Dr. Kildare movie series. His next serial was Daredevils of the West, an extraordinarily action-packed chapterplay about the completion of a frontier stage line in the face of outlaw attempts to destroy it. Acuff was Red Kelly, the stage line’s foreman, while Kay Aldridge was its owner and Allan Lane was the cavalry officer assigned to help them. Daredevils was so crammed with action setpieces that Acuff was almost completely deprived of the humorous bits he had enacted in Green Hornet Strikes Again and Jungle Girl; however, his ebullient personality kept him from being submerged by the serial’s breathless pace.

Above: Eddie Acuff returns a “borrowed” gun to scowling outlaw George J. Lewis in Daredevils of the West (Republic, 1943).

Above, from left to right: Eddie Acuff, Kay Aldridge, and Jack Rockwell in Daredevils of the West.

Acuff continued playing largely uncredited character parts in A and B features for the rest of the 1940s, winning (in 1945) a recurring part as the hapless mailman that continually collided with late-for-work Dagwood Bumstead (Arthur Lake) in Columbia Pictures’ Blondie comedies. His last major serial role was in Columbia’s 1946 cliffhanger Chick Carter Detective. A decidedly dull and disappointing attempt at a mystery serial, Carter featured Acuff as Spud Warner, a hustling but bumbling photographer who worked with reporter Rusty Farrell (Douglas Fowley) and detective Chick Carter (Lyle Talbot) to recover a stolen diamond. Talbot, ostensibly the star, had little to do, and Acuff and Fowley carried most of the serial’s action; while the script forced Acuff to be much more of a buffoon than in his previous serials (his character was forever getting into trouble and forever failing to get his friends to believe his accounts of his misadventures), he still handled his character’s fretting, griping, and excitable comments with a likably light touch that kept him from seeming obnoxious. 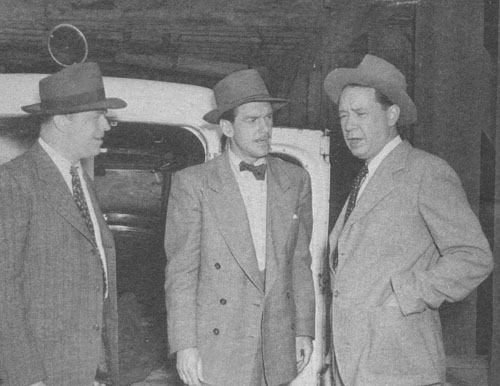 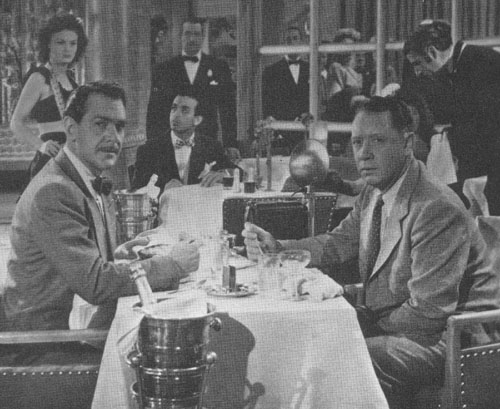 Above: Douglas Fowley and Eddie Acuff investigate a nightclub in Chick Carter Detective. Charles King is standing in front of the door in the background.

Acuff appeared in one more serial–Republic’s 1948 outing G-Men Never Forget, in which he had a brief bit as a loquacious used-car salesman named Fiddler who turned out to be in league with the villains and was gunned down by hero Clayton Moore. He made his last Blondie movie in 1949, and only appeared in about half-a-dozen more movies (his last being the Warner Brothers comedy Stop, You’re Killing Me) before retiring in 1952. Perhaps ill-health was the reason for this early retirement, since he sadly died four years later in Hollywood at the age of 53.

The best serial sidekicks were those who were able to be funny while still seeming capable, and Eddie Acuff was second to none when it came to walking this difficult tightrope. His comic but savvy screen personality allowed him to believably back up the hero, even as he gave matinee audiences plenty of material to chuckle at.

Above: A characteristic publicity portrait of Eddie Acuff, circa 1940.

Acknowledgements: Guy Bellinger’s Internet Movie Database biography of Eddie Acuff gave me some of the biographical information utilized in this article.