Above: A still of Lionel Atwill as Professor Moriarty in the feature Sherlock Holmes and the Secret Weapon (Universal, 1943)

English-born Lionel Atwill was a memorable presence in big and small feature films throughout the 1930s and 1940s, both as a character actor and occasional lead. Almost never cast in a sympathetic role, he nevertheless got to display considerable versatility throughout his career, portraying every imaginable kind of screen villain with skill and considerable relish–the wryly cynical cad, the crazed mad scientist, the corrupt and coldly heartless official, and many other evil “types.” Atwill also lent his theatrical flair and larger-than-life presence to four movie serials, and while his cliffhanger career was not nearly as long or distinguished as his career in features, he played these roles with a panache that easily won him a spot among the great chapterplay heavies. He was at an immediate advantage when he entered the serial world; his stocky frame, aristocratically arrogant face, and mustache made him the very picture of a melodramatic villain–a great asset in a melodramatic medium like the cliffhanger. He was also a practiced performer who knew when to play scenes with subtlety and when to chew the scenery in the grand theatrical style, and he almost invariably stole the show in his serial outings.

Atwill was born to well-to-do parents in Croydon, one of London’s many suburbs. He abandoned a prospective architectural career in his teens to become an actor, making his stage debut in 1904. By 1915, he was well-established as a major English stage actor, and moved on to conquer America in that year; he spent the remaining years of the 1910s and most of the 1920s working on Broadway. During this period he also appeared in silent films, although these were few and far between; his film work swelled greatly when sound came to the movies, since his crisp, stage-honed diction and carrying voice made him just the sort of actor needed for the new “talkies.” Beginning in 1932, Atwill would largely leave the stage behind him and concentrate on Hollywood motion pictures. He worked for several of the major studios throughout the 1930s, playing memorable (and sinister) leading parts in the horror films Mystery of the Wax Museum (Warner Brothers, 1933) and Murders in the Zoo (Paramount, 1933), as well as playing major supporting roles in less grisly features like The Song of Songs (Paramount, 1933) and Captain Blood (Warners, 1935). In 1939, he appeared with his good friend Basil Rathbone in Universal Pictures’ Son of Frankenstein, as an antagonistic but courageous police inspector; he would find himself returning frequently to Universal in the coming years. Atwill’s career began to slip a few notches in the early 1940s; while he still played plum roles in some A-films (like the Clark Gable/Spencer Tracy vehicle Boom Town and the classic Ernst Lubitsch comedy To Be Or Not To Be), he appeared more and more often in B+ movies, including an entry in the Charlie Chan series and several more Universal horror films–as well as one of that studio’s serials.

Atwill’s first cliffhanger was Junior G-Men of the Air (Universal, 1942). This was one of a series of cliffhangers that pitted the “Dead End Kids”–Billy Halop, Huntz Hall, Gabriel Dell, and Bernard Punsly–against foreign spies; in each outing, the boys would begin as semi-delinquents but shape up to save their country by the end. In Air, the Kids were up against Japanese saboteurs, led by Atwill as “the Baron.” Though Atwill’s Japanese makeup was not entirely convincing, and his screen time was was limited (all his scenes were shot within a couple of days, and almost all of them took place inside his character’s secret underground office), he still made the most of his brief appearances–coldly and sarcastically reproaching his henchmen for their failures, threatening prisoners with sinister politeness,, and gleefully gloating about the impending annihilation of America’s defenses (“American planes will fall from the sky–helpless! Destroyed!”

Above: Lionel Atwill is dangerously annoyed in Junior G-Men of the Air (Universal, 1942).

Above: Lionel Atwill smilingly in Junior G-Men of the Air. His cohorts are Turhan Bey (next to Atwill) and, left to right on the other side of the table, John Bagni, John Bleifer, and Bert Foreman.

Shortly after his first serial, Atwill’s movie career crashed in ruins when his unsavory private life caught up with him; for some time he had been hosting notorious debauches for the Hollywood set, and a court investigation into the ugly aftermath of one of these parties resulted in Atwill’s conviction on perjury charges. His sentence was suspended, but the bad publicity following the trial made the major studios nervous about hiring him; as a result, he was reduced to appearing in Universal’s medium-budgeted horror and mystery films (Frankenstein Meets the Wolf Man, Sherlock Holmes and the Secret Weapon), thrillers from the extremely low-budget studio PRC (Lady in the Death House, Fog Island)–and three more serials.

The first of these three cliffhangers was Atwill’s only non-Universal chapterplay, Captain America (Republic, 1944). Atwill was cast as Dr. Maldor, a “wronged” but mad scientist and explorer who harked back to similar characters Atwill had played in his 1930s horror films. Irate that his colleagues had reaped fame and wealth from his archeological discoveries while relegating him to the “insignificant” post of a museum director, he set out to murder each and every one of them–appropriating their fortunes and inventions to soothe his injured ego and perpetrating his outrages under the pseudonym of “The Scarab.” District Attorney Grant Gardner (Dick Purcell), both in his own person and in the guise of the masked “Captain America” opposed the Scarab’s rampage at every step, but was hampered by his unawareness of the friendly Dr. Maldor’s real identity. The Maldor/Scarab role was an ideal vehicle for Atwill’s brand of screen villainy; he was frighteningly cold and merciless while eliminating enemies with mind-control gas and other gimmicks, while bringing a somewhat tongue-in-cheek sense of humor to the scenes in which he posed as a good guy; his “Scarab” seemed to relish pulling the wool over the other characters’ eyes. Full of fast-paced action and blessed with a strong cast, Captain America was probably the overall best of Atwill’s serials, and certainly provided him with his most memorable chapterplay showcase.

Above: Lionel Atwill confronts Frank Reicher, one of the targets of his wrath in Captain America (Republic, 1944).

Raiders of Ghost City (Universal, 1944), followed Captain America by about five months. This second of Atwill’s Universal chapterplays gave him a much meatier part than Junior G-Men of the Air had. As in G-Men, he was a spy, this time a suave Prussian agent named Erich von Rugen (alias Alex Morel) operating in the American West in the Civil War era. Von Rugen and his female partner the Countess (Virginia Christine) were posing as Confederate sympathizers in order to utilize CSA Captain Clay Randolph’s (Regis Toomey) irregulars in their plan to steal US gold shipments, but they were opposed by Union Secret Service agent Steve Clark (Dennis Moore). A WW2 spy thriller in period dress, Raiders was hampered by an overabundance of dialogue, but its productions values were good, and its cast was stellar. Atwill gave his character the haughtiness of the stereotypical Prussian aristocrat, along with a good measure of cynical wit–as when he released a railroad car from a train atop a steep grade in an attempt to kill the heroes, then sanctimoniously proclaimed to the Countess, “I’m afraid, my dear, that the coupling of the last car has broken” while fastidiously wiping grease from his hands. 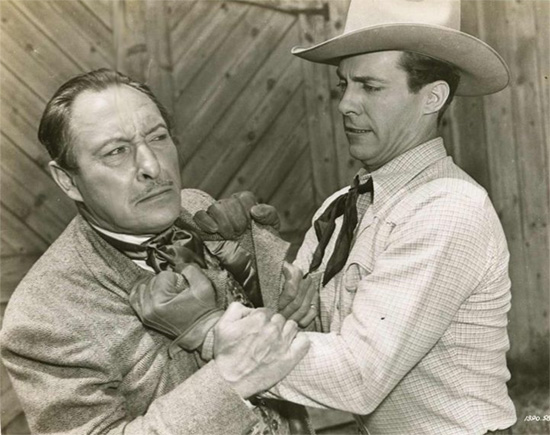 Above: Lionel Atwill looks alarmed as Dennis Moore prepares to thump his head in Raiders of Ghost City.

After a string of PRC and Universal features, Atwill returned to serials one last time with Lost City of the Jungle (Universal, 1946). Talky, like Raiders of Ghost City, Jungle benefited from a colorful locale (the tiny autonomous city of “Pendrang,” in a mountain jungle basin), strong performances, and an intriguing cast of characters. Atwill played Sir Eric Hazarias, an international weapons dealer and professional “warmonger” who was seeking “Meteorium,” a mysterious element capable of providing a defense against the A-bomb. Hazarias’ plans to sell the element to the highest bidder were opposed by “United Peace Foundation” agents Rod Stanton (Russell Hayden) and Tal Shan (Keye Luke).  Jungle could possibly have rivaled Captain America as Atwill’s best serial showcase, had Atwill not been severely stricken with pneumonia during its filming, an ailment that aggravated his already-present lung cancer. He was forced to abandon work on the chapterplay before all his scenes were in the can, and the writers and directors were obliged to resort to various awkward contrivances to cover up his absence, among them bringing in another character who was supposedly Hazarias’ secret boss, and filming some scenes with an Atwill stand-in. Despite his health, Atwill was still in good form in Jungle, posing as an archeologist named Geoffrey London and taunting the heroes on their inability to prove his true identity, curtly ordering his underlings about, and unctuously proclaiming, when his incognito was pierced by his erstwhile colleague John Eldredge, that he wasn’t really the “Apostle of Disaster” the world thought him. Atwill died shortly before Lost City of the Jungle was released, making the serial a sadly unexpected but not unworthy valedictory to a distinguished screen career. 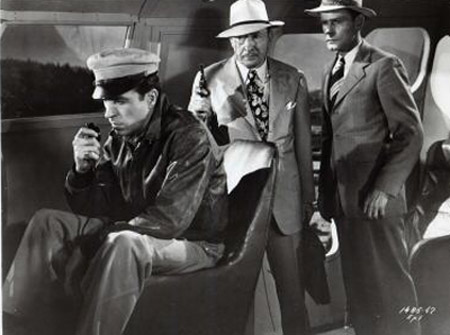 Above: Lionel Atwill prepares to plug undercover man Keith Richards in Lost City of the Jungle (Universal, 1946). George Lynn is on the far right. 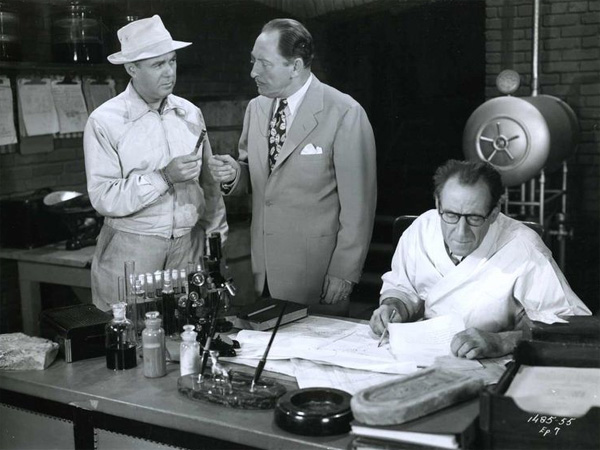 Above, from left to right: John Gallaudet, Lionel Atwill, and John Miljan in Lost City of the Jungle.

Lionel Atwill’s imposing appearance, rolling stage-trained voice and careful balance of sly underplaying with unrestrained theatricality allowed him to almost effortlessly dominate all of his scenes in each of his serials. Rotten as his characters were, Atwill played them with such larger-than-life villainous virtuosity that they delighted serial viewers quite as thoroughly as they bedeviled serial protagonists.

Above: Lionel Atwill plots with his henchmen via radio in Captain America(Republic, 1944).

Acknowledgements: Gregory Mank’s book Hollywood’s Maddest Doctors: A Biography of Lionel Atwill, Colin Clive and George Zucco (Midnight Marquee Press, 1998) was the source of the biographical information in this article.

One thought on “Lionel Atwill”