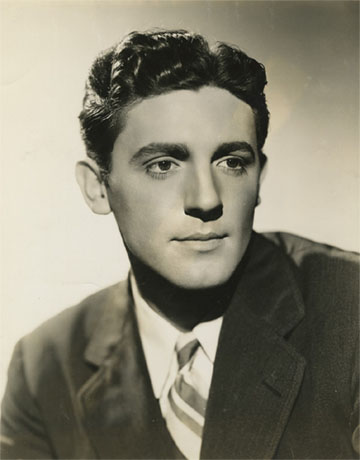 Above: A 1938 Columbia publicity portrait of Richard Fiske.

Richard Fiske spent his short acting career almost entirely at Columbia Pictures, playing a wide variety of bits and supporting parts roles in that studio’s B-movies, comedy shorts, and serials. Possessing leading-man looks but a character actor’s flexibility, Fiske could play anything from sympathetic but fatally misguided gunmen to blustering comic foils. In his serial work, he was always a non-comic sidekick, and managed to get more out of these potentially colorless roles than most serial actors did. Where other performers were forgettably bland at best, Fiske was memorably cheerful and energetic; his sidekicks were interesting characters in their own right, not mere satellites to the hero.

Richard Fiske was born Thomas Ralph Potts in Shelton, Washington. His aunt, Minnie Fiske, had attained some prominence as a stage and silent-film actress during the second half of the 19th Century and the earlier years of the 20th–which may have influenced the young Fiske to take up acting himself. In any case, he briefly attended college in the mid-1930s, but eschewed it in favor of a screen career; he started working in Hollywood in 1938 as a Columbia contract player. Since he seemed absolutely at home even in his earliest films, it’d be logical to assume that he had previous stage acting experience–possibly in college, as Chuck Anderson (see the Acknowledgements) suggests. One of Fiske’s first Columbia projects was the serial The Spider’s Web, based on the pulp-magazine adventures of a masked crimefighter called the Spider, who mercilessly battled the underworld but was still hunted by the police. Warren Hull played the serial Spider and his wealthy alter ego Richard Wentworth, while Fiske played Jackson, one of the small group of aides privy to the Spider’s real identity. Along with the other members of the Spider’s team, Fiske aided the masked avenger in his fight against the Octopus, a mysterious master criminal trying to take over the city’s transportation systems. Fiske brought to his interactions with Hull something of the demeanor of an earnest young subaltern towards a veteran commander–either coincidentally or deliberately echoing the relationship of the characters in the pulps, where Jackson was supposed to have served under Wentworth in the war.  Full of action, suspense, and atmosphere, The Spider’s Web was probably the best serial Columbia ever made. The cliffhanger’s impressive cast also had much to do with its success, and while Fiske was merely one of a strong and colorful ensemble of players, he contributed more than his share of personality to the proceedings. His Jackson was a vivid and likable character–intensely eager to combat the underworld but  never rash or impetuous, and always willing to defer to Wentworth’s judgment.

Above: Don Douglas, Warren Hull, and Richard Fiske (standing left to right) and Iris Meredith and Kenne Duncan (seated) go over a list of solid citizens suspected of being the Octopus in The Spider’s Web (Columbia, 1938).

Above: Iris Meredith and a rather battered Richard Fiske are threatened by the Octopus in The Spider’s Web.

The next four years would find Fiske appearing in every type of film turned out by Columbia’s B-movie division. He battled comedians like Andy Clyde, Buster Keaton, and the Three Stooges, played one of Dagwood Bumstead’s (Arthur Lake) office cronies in several of Columbia’s Blondie comedies, and worked with B-western stars like Charles Starrett and Bill Elliott as both good guys and bad.  He also made three more serials at Columbia, beginning with 1939’s Flying G-Men. His part in this spy adventure marked his closest approach to a starring role; he played a G-man and former flying ace called Bart Davis, who joined with three peers and friends and created an airborne hero called the Black Falcon as part of their battle with an espionage and sabotage ring. One of the group assumed the role of the Falcon, while the others provided him with support and helped to confuse the villains as to his actual identity. While Fiske turned out not to be the Falcon, he shared heavily in most of the serial’s other heroic duties, splitting screen time more or less equally with fellow “suspects” Robert Paige and James Craig (the fourth suspect, Stanley Brown, was killed off early in the serial). G-Men was not as cohesive or consistently well-done as The Spider’s Web, but it was an enjoyable cliffhanger, helped immeasurably by the buoyancy with which Fiske and his co-heroes played their parts. 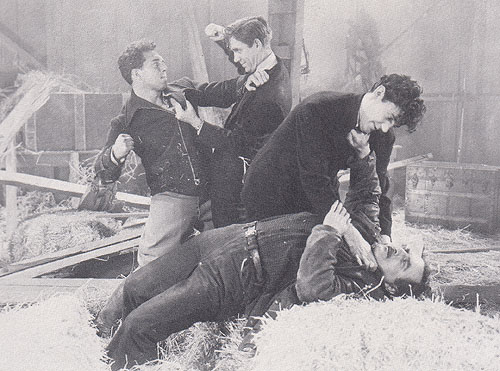 Above: Robert Paige battles Jerry Frank (wearing the bomber jacket) in the foreground, while Richard Fiske throttles Al Ferguson in the foreground in this fight scene from Flying G-Men (Columbia, 1939). 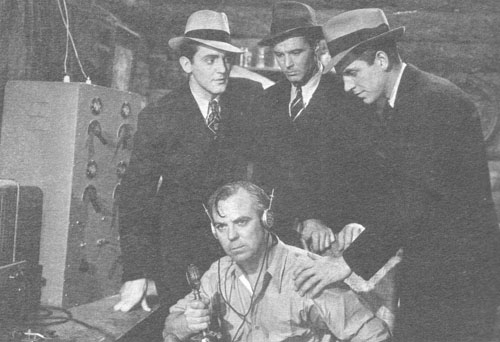 Fiske’s third serial, Overland With Kit Carson (Columbia, 1939), teamed him with his frequent feature co-star Bill Elliott. Elliott played the title role in thisWestern cliffhanger, while Fiske was cast as Lieutenant Dave Brent,  an army officer assigned to assist Kit Carson in the fight against a mysterious outlaw leader–and would-be Western emperor–called Pegleg. Fiske delivered a serious and authoritative performance suited to the character’s military position, and made the most of his part despite being somewhat dwarfed–along with the rest of the large cast–by the serial’s unusually large-scale locations and action scenes. 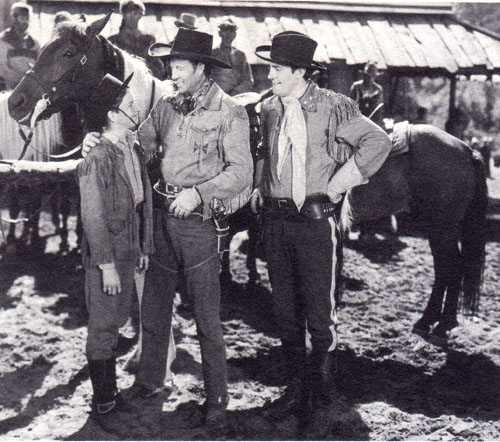 Above, from left to right: Bobby Clark, Bill Elliott, and Richard Fiske in Overland With Kit Carson (Columbia, 1939).

Fiske left Columbia in 1942, right after appearing in the serial Perils of the Royal Mounted. This Mountie cliffhanger was directed by James W. Horne, who tended to play his serials for laughs as with rather unsatisfactory results. Perils was a typical Horne outing, featuring some good action but was largely sabotaged by overacting and too many comic interpolations. Fiske, as a Mountie named Brady who assisted leading man Robert Kellard throughout, came off better than many of the other cast members; he played his role in laid-back and natural fashion despite the chaotic nature of the production.

Fiske only appeared in two films (both 1942 releases) after leaving Columbia–the RKO A-western Valley of the Sun (which starred his old Flying G-Men compatriot James Craig) and Paramount’s classic comedy The Major and the Minor; both films featured him in small but credited roles. Major and the Minor would be Fiske’s final film; later in 1942, he left Hollywood to enlist in the Army. In 1944, during the Allied invasion of Normandy, he was killed in action near the village of LeCroix.

Richard Fiske, during his sadly brief career, made several memorable contributions to Columbia Pictures’ shorts and features, from his hilarious turn as a hysterical drill sergeant in the Three Stooges short Boobs in Arms to his strong performance as Bill Elliott’s best-friend-gone-wrong in the B-western Across the Sierras. Fiske’s serial roles were not as colorful or demanding as his roles in shorts and features, but he still made them memorable, giving characters like Jackson and Lieutenant Brent touches of personality that set them far above the average “serious” sidekick. 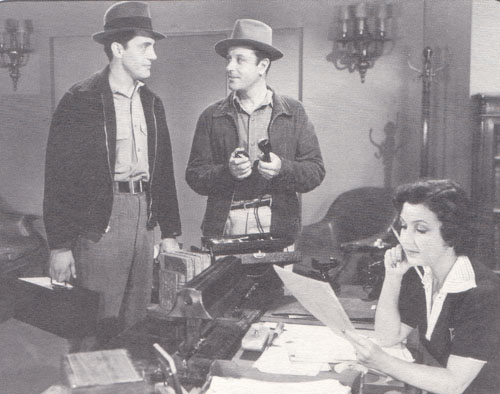 Above: Richard Fiske and Warren Hull, disguised as telephone repairmen, plant a bug in a suspect’s office right under the nose of secretary Beatrice Blinn in The Spider’s Web (Columbia, 1938).

Acknowledgements: My thanks to Chuck Anderson of the Old Corral website, whose excellent section on Richard Fiske furnished this article’s information about Fiske’s real name, his actress aunt, and his early education.