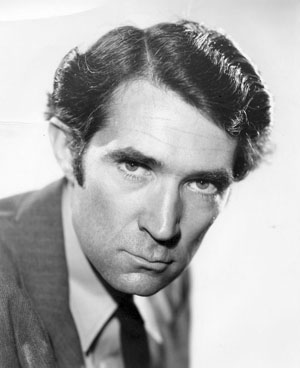 Above: A publicity portrait of Trevor Bardette from the 1941 Columbia B-film Mystery Ship.

Trevor Bardette, a chameleon-like character actor in feature films, was also a memorable villain in four different movie serials. Though not physically formidable, Bardette could convey extraordinary menace; his deep-set eyes were ideal for delivering merciless stares, and his ominously soft voice could suddenly harden as he snapped out ruthless commands. Bardette seemed to specialize in playing cliffhanger villains whose facades of respectability were more elaborate than that of the average serial heavy; his  characterizations often amounted to dual roles. Considering that he played both tough guys and “weasels,” cowboys and Indians, half-wits and masterminds, hillbillies and city slickers–and any number of other types–during his screen career, Bardette had more than enough versatility to excel in such serial parts.

Trevor Bardette was born Terva Gaston Hubbard in Nashville, Arkansas; the earliest federal census I’ve been able to discover him on is the 1920 one, which has him living with his widowed mother (a professional cook). As a young man, he studied mechanical engineering at Oregon State University–but got into the acting business after his graduation. By 1930 he had adopted the stage name of Trevor Bardette and was working as a theatrical actor in New York City; at some point during the next five years, he abandoned the footlights for gold-mining in Mexico (where he was living in 1935). However, by 1937 he had moved on to Hollywood, making his movie debut in the Hopalong Cassidy western Borderland.  He quickly became a familiar face in A and B movies, particularly at Warner Brothers, where he played a key role in the drama They Won’t Forget and character parts in pictures such as the Jimmy Cagney Western The Oklahoma Kid and the detective B-film Mystery House. By 1939 he had proven his talent for playing a wide range of roles, and this versatility probably factored into Columbia Pictures’ decision to cast him in what amounted to an unusually complicated dual role in Overland With Kit Carson (Columbia, 1939).

Overland With Kit Carson starred Bill Elliott as Carson, who was assigned by the government to track down an outlaw gang called the Black Raiders; these Raiders were attempting to halt the westward march of pioneers through numerous attacks. The Raiders’ leader, the mysterious outlaw Pegleg, planned to make himself ruler of the vast and unsettled Western territories, and concealed his identity by posing as a seemingly harmless frontiersman and an ally of Carson’s. Bardette played both Pegleg and his alter ego, the French trapper Mitchell, one of the few times in serial history that a mystery villain and the guilty “suspect” were played by the same actor. It’s fairly easy for any viewer familiar with Bardette to spot the double masquerade, but Trevor definitely did all he could to differentiate the two faces of Pegleg, giving the trapper a thick, slightly cartoonish accent and an excitably eager manner. Pegleg, by contrast, had an icy, almost inhuman demeanor, which would warm to a controlled but impassioned fanaticism whenever the outlaw king began to expound on his dream of a frontier empire. With a hideously scarred face and a false wooden leg whose thumping signaled his advent, not to mention his willingness to exterminate both good guys and rebellious henchmen on the slightest provocation, Pegleg was probably the scariest villain in any Columbia serial and easily one of the most nightmarish bad guys in any studio’s cliffhangers. Kit Carson had unusually lavish production values, beautiful location shooting, and a terrific cast, but Pegleg is invariably the first thing fans recall when the serial is mentioned. 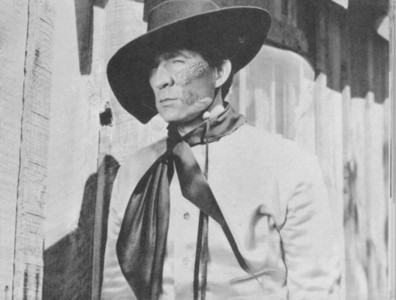 Above: Trevor Bardette as Pegleg in Overland With Kit Carson (Columbia, 1939). 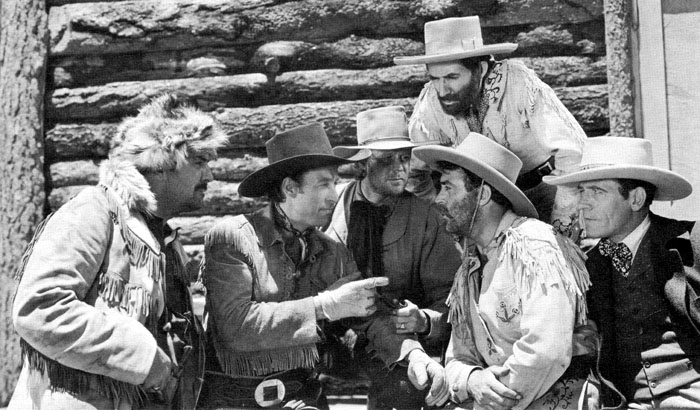 Above: Bill Elliott (second from left) talks with a group of suspects in Overland With Kit Carson. Olin Francis is on the far left, Kenneth MacDonald on the far right. Hal Taliaferro is in the center, LeRoy Mason faces Elliott, and Trevor Bardette looms above the group.

After his memorable cliffhanger debut, Bardette continued his busy career as a character actor in features, but made three more serial appearances over the next three years. His second serial was the exciting 1940 Universal cliffhanger Winners of the West, and while his character, the black-clad “Raven,” was not nearly as prominent as Pegleg had been, he was still quite sinister. Raven was the right-hand man of the hard-driving outlaw boss King Carter (Harry Woods), who was determined to prevent a railroad from opening up his territory to law and order. Raven managed Carter’s saloon and did other odd jobs, among them eliminating Carter’s enemies with the aid of a pocket derringer. Bardette projected a quiet menace throughout the serial, faithfully obeying his boss’s commands but bluntly arguing with him when he thought he had made a mistake–overall, the character seemed something like a loyal but independent-minded and deadly cat (Bardette accentuated this feline air by continually dusting off his suit and polishing his hat, stealing many scenes with this peculiar quirk). 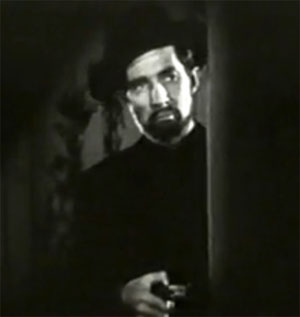 Above: Trevor Bardette is about to remove a potential squealer in Winners of the West (Universal, 1940).

Above: Harry Woods and Trevor Bardette confer in Winners of the West.

Bardette’s third serial was Jungle Girl (1941), his only cliffhanger for Republic Pictures. This excellent chapterplay featured him–albeit briefly– as a good guy, before he switched into familiar villainous mode. He began the serial as the kindly Dr. Meredith, who had emigrated to a remote African jungle with his young daughter Nyoka (Frances Gifford) in order to escape the notoriety brought on the family by his scoundrelly twin brother Bradley. Unfortunately, Bradley traced his sibling to the jungle and tried to enlist him in a scheme to plunder the local Masamba tribe of their treasure in diamonds. When the good doctor refused, he was murdered by Bradley’s partner Slick Latimer (Gerald Mohr); Bradley then impersonated his slain brother in order to carry out the diamond-stealing scheme. Ultimately, Bradley tried to double-cross Latimer, stealing and hiding half of the coveted diamonds–only to meet the same fate as his brother. Bardette handled his complex part just as well as he had his double role in Overland With Kit Carson: his Dr. Meredith was a soft-spoken, quietly dignified, and extremely likable character, while Bradley began the serial as a cool and slimily confident schemer, only to slowly degenerate into a panic-stricken coward in the face of unexpected obstacles.

Above: Trevor Bardette, as the good Dr. Meredith, shakes hands with  native chief Al Kikume as he prepares to leave with Gerald Mohr (in pith helmet) to visit his “sick” twin brother. Frances Gifford is between Kikume and Bardette in this scene from Jungle Girl (Republic, 1941).

Above: Trevor Bardette, as the evil Bradley Meredith, fouls up an attempt to remove a splinter from native boy Tommy Cook, making Frances Gifford suspect that he might not be her physician father in Jungle Girl.

Bardette’s final serial was The Secret Code (Columbia, 1942), a World War 2 espionage adventure that starred Paul Kelly as a police detective who infiltrated a gang of Nazi spies and saboteurs. Bardette was Jensen, the spy ring’s chief, who posed as the absent-minded and hard-of-hearing owner of a camera store. When not plotting acts of sabotage, Jensen spent his time eavesdropping at police headquarters and picking up information with his “hearing aid” (actually a radio). The Secret Code rather over-stressed its propaganda elements, but it did feature excellent action scenes and strong acting. Once again Bardette employed his acting versatility to maximum effect; he was intimidatingly sinister as the spy leader, but also managed to be quite funny in his pose as a harmless old duffer. Whenever Jensen dropped his doddering act and began to snap out orders to his men, the transformation was quite startling. 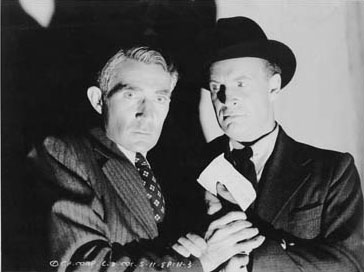 Above: Trevor Bardette and Gregory Gaye in a publicity still for The Secret Code (Columbia, 1942).

Above: Beal Wong and Trevor Bardette watch as Rudolph Anders transcribes a coded message in The Secret Code.

After Secret Code, Bardette continued his prolific screen career for nearly thirty years. He appeared in roles of varying size in comedies (Henry and Dizzy), B-Westerns (Wyoming Bandit, Marshal of Cripple Creek), B-mysteries (The Whistler, Dick Tracy),  A-Westerns, (Rage at Dawn), and many other films. He became chiefly active on TV in the mid-1950s, landed two memorable guest appearances on The Adventures of Superman, and was a familiar face on other series like The Lone Ranger and Lassie.  One of his last big-screen roles was as Robert Mitchum’s father in 1958’s Thunder Road; in the early 1960s he became a regular on the show The Life and Legend of Wyatt Earp, as Earp’s frequent antagonist Old Man Clanton. Bardette worked on other shows throughout the 1960s, among them The Rebel, Cheyenne, Bonanza, and Perry Mason; his final screen appearance was as a bit as a train conductor in a 1970 episode of Gunsmoke. He retired to run a ranch in Green Valley, Arizona, where he passed away in 1977.

There were some serial villains whose screen persona was so well-known that they merely had to walk into a room to establish an air of menace–Bela Lugosi and Lionel Atwill being two examples. Trevor Bardette, who built his career on his versatility and never created one screen “image,” had to work a little harder to establish menace in his serial roles–but he easily overcame this handicap to deliver some of the meanest, sneakiest, and scariest villainous portrayals in cliffhangers.

Acknowledgements: I. S. Mowis’ biography of Trevor Bardette at the Internet Movie Database provided me with the above information about Bardette’s college years and his ranching activity; the federal censuses for 1920, 1930, and 1940 were also very useful. The “residence in 1935” feature of the latter census informed me of Bardette’s Mexican sojourn, while the Bardette page at Western Clippings  told me just what he was doing in Mexico (although the same page, judging from the 1930 census, gets the chronology of Bardette’s stage career wrong).