Above: Buck Jones, in a publicity photo from the 1930s.

The best of all the Western serial heroes was undoubtedly Buck Jones, who was also one of the best stars of Western features. Like many other good movie cowboys, he was handsome in a rugged way, and his riding and horse-handling skills were phenomenal. However, what set Jones above and beyond other similarly-gifted stars was the skill with which he could handle both comedy and drama, and the easygoing naturalness he brought to his “cowpoke” portrayals. His cowboys were generally tough, smart, and incorruptibly honest, but also mischievous, flippant, and rather awkward around girls–in a word, everything you’d expect a real-life heroic cowboy to be. One of the few serial leading men to be regularly granted above-the-title billing, and one of the few to be allowed to ad-lib dialogue, Jones had more sheer “star power” than many A-film stars, let alone B-film stars.

Jones was born Charles Gebhart in Vincennes, Indiana. Though I and others have stated that he grew up in Oklahoma, researcher Dave Smith has established that Jones actually spent his youth in Vincennes. He worked as a race car driver and spent two stints with the US Calvary in the Philippines before joining the 101 Wild West Show in 1913. His riding experience helped him to become a major rodeo performer, and for the next five years he worked for various circuses and Wild West shows. In 1917, he and his wife, expecting a child, quit the circus life and settled in the Hollywood area, where Jones began to work as a stuntman in Western movies. Fox Films gave him his screen name and promoted him to a Western star in 1920; he remained a popular leading man throughout the 1920s. Fox dropped his contract when the technical demands of sound-film shooting caused the studio to suspend production of outdoor Westerns, and he briefly returned to the Wild West Show circuit in 1929. In 1930, he began starring in a series of B-westerns for Columbia Pictures, while playing occasional leading roles at other studios. [1]

One of these studios was Universal Pictures, which starred Jones in his first serial, Gordon of Ghost City, in 1933. This cliffhanger featured Jones as Buck Gordon, a happy-go-lucky cowboy who signed on as a range detective for a rancher (William Desmond) victimized by a gang of rustlers. Gordon also encountered a girl and her grandfather (Madge Bellamy and Tom Ricketts) trying to reopen a gold mine in deserted Ghost City–a town that happened to be the hideout of the rustlers (led by Walter Miller). Gordon had his hands full protecting both his boss’s cattle and the gold mine from the rustler gang, not to mention dealing with a crazy old coot (Francis Ford) hiding out in the ghost town and taking pot shots at both sides. Gordon of Ghost City was a colorful and action-filled Western serial, and Jones, though backed up by a strong supporting cast, easily held center stage throughout. He performed riding, fighting, and shooting chores with flair, ad-libbed some witty quips, and shared some fine semi-comic scenes with leading lady Madge Bellamy; his startled reaction to her admission of affection for him was particularly funny. 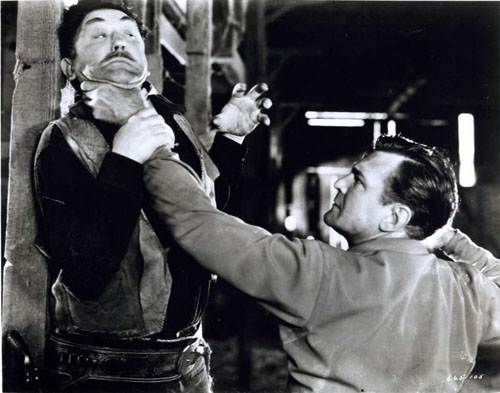 Buck signed a contract with Universal Pictures in 1934, and began a long series of B-westerns at that studio. The same year, Universal also featured him in another cliffhanger, The Red Rider. This serial featured Buck as a sheriff named Red Davidson, who forfeited his badge for allowing his friend Silent Slade (Grant Withers) to escape jail after Slade was wrongfully sentenced to hang for murder. Red then set out to track down the real killer, who turned out to be rustling and smuggling boss Jim Breen (Walter Miller). The Red Rider, based on a book by W. C. Tuttle, was probably the best of Jones’ serials, with a strong plot, good action, memorable characters, and a good cast–among them Richard Cramer as Miller’s Mexican cohort and Marion Shilling as the heroine. Jones excelled in the lead, handling drama (agonizedly deciding to sacrifice his career to save his friend) and comedy (dousing his pal Edmund Cobb with a bucket of water to halt Cobb’s yowling singing) with equal skill. 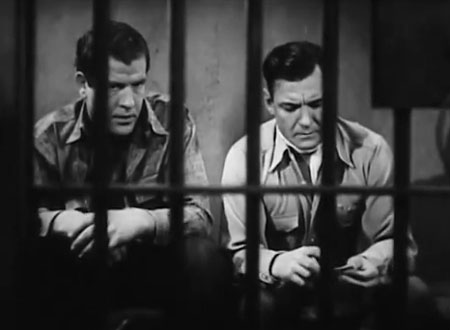 Above: Buck Jones plans a jailbreak with Grant Withers in The Red Rider (Universal, 1934). 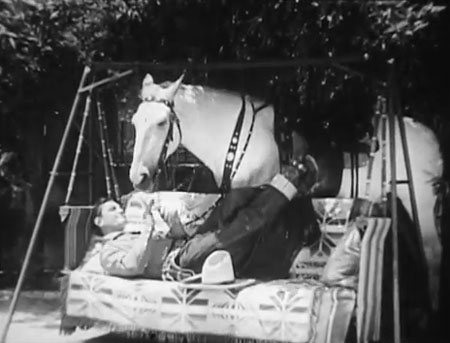 Above: Buck Jones and his horse Silver share a relaxing moment in The Red Rider.

Jones continued to appear in Universal serials while concurrently starring in the studio’s B-westerns. His next Universal cliffhanger, however, was also his weakest at that studio. The Roaring West (Universal, 1935), featured Jones as a cowboy named Montana Larkin, who aided rancher William Desmond and his daughter Muriel Evans in their fight against a gang of rustlers led by Walter Miller, while also helping old-timer Harlan Knight protect his gold claim from Miller’s gang. Reminiscent in many respects of Gordon of Ghost City, the new serial did not match the earlier one in terms of quality, due mainly to a meandering script, an over-large cast of underdeveloped characters, and a disappointing final chapter. Jones himself, however, delivered another ingratiating performance, interacting well with crusty sidekick Frank McGlynn Sr. and with leading lady Muriel Evans. 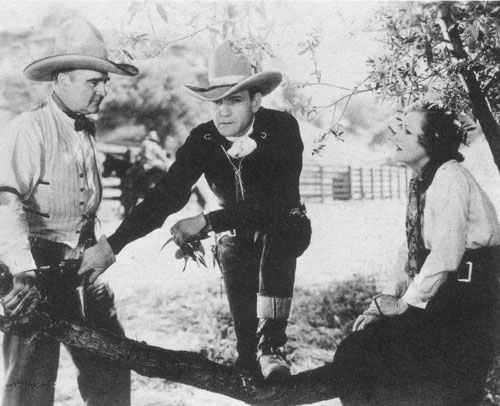 Above: William Desmond, Buck Jones, and Muriel Evans in The Roaring West.

Jones’s next serial was an improvement over The Roaring West, and was also his final starring chapterplay for Universal. The Phantom Rider (1936), featured Buck as a state ranger named Buck Grant, who went undercover as the cloaked “Phantom Rider” to battle a gang of rustlers. The villains, led this time by Harry Woods instead of Walter Miller, were bent on driving ranchers off their land in order to buy it cheap and sell it dear to an incoming railroad. The main target of their depredations was the ranch owned by heroine Marla Shelton, but Jones and his sidekick George Cooper put a stop to the outlaws’ plans. The Phantom Rider was a fast-moving, exciting serial, with engaging performances by Jones and the other cast members. Buck’s humorous interplay with George Cooper was particularly memorable; the two had already worked as a team in the comic B-western Forbidden Trail for Columbia. 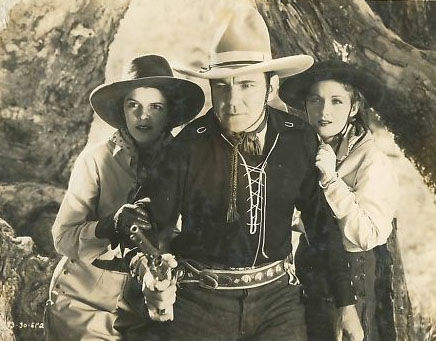 Above: Buck Jones urges Marla Shelton not to sell her ranch in The Phantom Rider.

Jones’ Universal contract expired in 1937, and he returned to Columbia for another B-western series that same year. The eclipse of traditional B-westerns by singing cowboy films in the late 1930s caused him to be regarded as something of a second-string B-western star, and his new Columbia series was short-lived, ending in 1938. The next couple of years saw Jones concentrating largely on rodeo appearances and only working in a handful of films, among them Wagons West for Republic Pictures, in which he was sorely miscast as a villain. He began a comeback in 1941, starring in his only non-Universal serial, White Eagle (Columbia, 1941). The serial shared its title with one of Jones’ 1932 Columbia B- westerns, but borrowed little from that film (which had been an unusually dramatic B-western) except for the casting of Buck as a white man raised by Indians. In the serial, Jones’ character “White Eagle” battled the schemes of Dandy Darnell (James Craven), who was out to foment discord between settlers and Indians for his own gain. White Eagle was directed by James W. Horne, a former comedy director notorious for playing his serials for laughs. Jones, with his comedic talents, could easily have fit into the tongue-in-cheek Horne milieu, but he instead chose to duplicate his intense and serious performance from the original White Eagle feature. He did display a lighter side in interchanges with sidekick Raymond Hatton, but generally made a rather odd contrast to the semi-hysterical antics of villain James Craven and the bumbling of Craven’s henchmen.

Above, from left to right: Raymond Hatton, Al Ferguson, and Buck Jones in White Eagle (Columbia, 1941).

Jones returned to Universal for his final serial, 1941’s Riders of Death Valley. This cliffhanger, dubbed “the Million Dollar Serial” by the Universal publicity department, featured an all-star cast that included Jones, Dick Foran, Big Boy Williams, Leo Carrillo, and Noah Beery Jr. (as good guys) and Charles Bickford, Lon Chaney Jr. and Monte Blue (as bad guys). The plot, dealing with a fight over the heroine’s gold mine, was simple enough, but the combination of clever scripting, almost-continual action, and larger-than-life performances made the serial something out of the ordinary. Jones, for the only time in his serial career, was not top-billed, since Foran played the leading hero, but Buck’s character “Tombstone” nevertheless got in on most of the action scenes and dispatched leading villain Bickford at the end. Jones also got to deliver a lot of funny lines, including some genially barbed banter with Foran and Leo Carrillo, and some ad-libbed critiques of Foran’s fighting style while the latter slugged it out with a thug. All in all, Jones’ colorful, scene-stealing performance in Riders provided a worthy end to his serial career.

Above: Buck Jones and Dick Foran (foreground) and Guinn “Big Boy” Williams and Glenn Strange (background) hold off the villains in Riders of Death Valley (Universal, 1941). 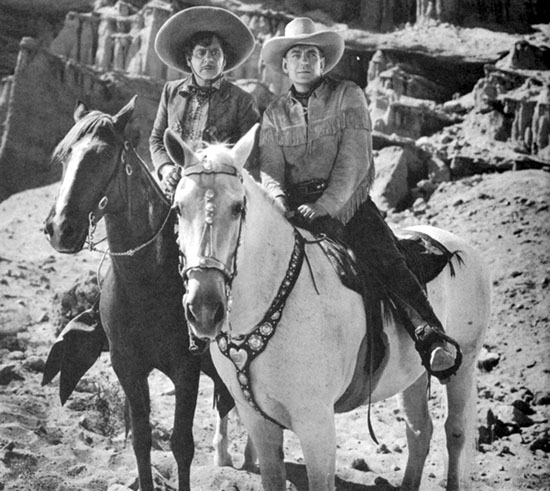 Above: Leo Carrillo and Buck Jones in Riders of Death Valley.

Jones’ popularity enjoyed something of a resurgence following his two 1941 cliffhangers, and he was signed by Monogram Pictures to star in the still fondly-remembered “Rough Riders” B-western series, supported by Tim McCoy and Raymond Hatton. However, his career came to a sudden and tragic end in 1942. While on a personal appearance tour in Boston, Jones was caught in a fire at the Cocoanut Grove Nightclub and severely injured; he died in the hospital the next day.

Buck Jones’ ability to easily switch from straight dramatic scenes to action sequences to out-and-out comedy routines was amazing, and more or less unequaled by other serial and B-western leads. His talent and charisma made him the serial equivalent of movie stars like Cary Grant or Jimmy Stewart–an actor whose mere presence in a film immediately raised the audience’s interest in said production. There were few serial heroes that an audience identified with more instinctively, or rooted for more whole-heartedly, than those played by Buck Jones. 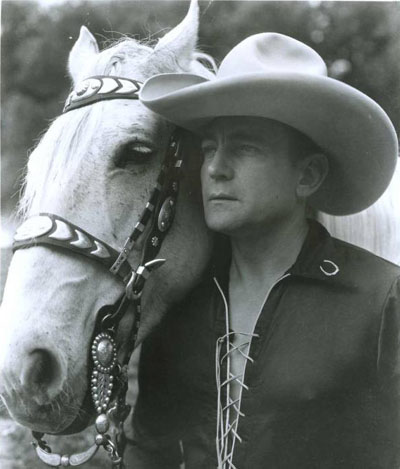 Above: Buck Jones with the trusty Silver in a late 1930s Columbia publicity portrait.

Acknowledgements: My thanks to B-Western historian Bobby Copeland for providing me with Buck’s correct birthdate. Much of the biographical information on Jones included in this article comes from Dave Smith via Chuck Anderson’s Old Corral website–my thanks to both. The page in question is here.