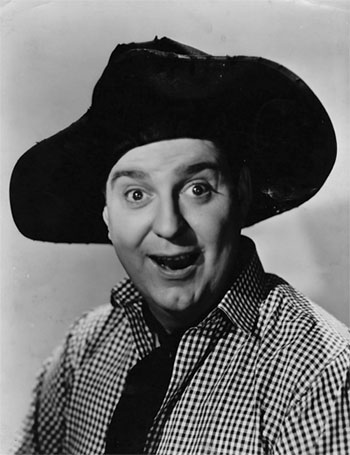 Above: A publicity portrait of Smiley Burnette circa 1946, in the outfit he wore throughout his B-western career.

The rotund and rubber-faced Lester Alvin “Smiley” Burnette–musician, singer, composer and slapstick comedian–was one of the most popular B-western performers of the 1930s and 1940s, one of the only “sidekicks” to rate as a box-office attraction in his own right. When singing, Burnette could hit almost every note on the musical scale; when acting, he could also hit every note on the comedy scale, from manic energy to poker-faced calm. Burnette’s best work was in his features with Gene Autry, but he began his distinguished matinee career as a sidekick in cliffhanger serials.

Burnette was born in Summum, Illinois, the son of a minister. He became interested in music at a young age, and had learned to play over half-a-dozen instruments before he was ten years old. He dropped out of school in his early teens to help support his family, and worked at innumerable odd jobs until he landed a job at a local radio station called WDZ in 1929; he was virtually the only employee at the station and served as its singer, announcer, comedian, disc jockey, and one-man band. Here, he acquired his “Smiley” moniker (from a character in Mark Twain’s Jumping Frog of Calaveras County, one of the many books and comic strips Burnette read on the air), learned to play additional instruments, and developed his later movie persona. In 1933, popular radio singer Gene Autry was working out of Chicago and looking for a new accordionist; hearing of the versatile Burnette, he hired him to join him on the popular “National Barn Dance” radio show. Smiley quickly became an important part of Autry’s show, serving not only as musician but as comic relief. By now, Smiley could play almost every standard instrument, as well as several of his own invention, and had written numerous songs despite his inability to “read” a sheet of music; he would go on to pen more than a hundred compositions, and win a place in the Nashville Songwriters’ Foundation Hall of Fame.

In 1934, Hollywood producer Nat Levine, boss of Mascot Pictures, decided to capitalize on Gene Autry’s nation-wide radio popularity, and brought the cowboy singer and several of his radio cohorts, Smiley among them, to California; Levine wound up signing both Autry and Burnette to ten-year contracts. Gene and Smiley made their screen debut in Mascot’s Ken Maynard B-western In Old Santa Fe, featuring in an extended musical interlude; simultaneously, they appeared briefly as a pair of wagon drivers in Mascot’s Mystery Mountain, a 1934 Western cliffhanger also starring Maynard. When Maynard left Mascot in a huff the following year, Levine cast Autry and Burnette in Maynard’s abandoned serial vehicle The Phantom Empire (Mascot, 1935). A bizarre but enjoyable mixture of Western and sci-fi adventure, Empire had Autry playing a rancher and radio singer who stumbled across a subterranean, scientifically-advanced lost civilization. Burnette was Oscar, Gene’s bumbling but courageous sidekick, who was just as willing to assist the hero in musical numbers as he was to venture into the dangerous underground realm of “Murania.” Empire showed Smiley to better advantage than most of his later serials would; he not only took a fairly prominent part in the action in the serial’s later chapters, but was also allowed to perform snippets of the musical and comical routines that he had honed on the radio–routines that didn’t seem very out of place in Empire, considering what a colorful grab-bag of a serial it already was.

Above, left to right: Smiley Burnette, Gene Autry, and Peter Potter at the secret entrance to Murania in The Phantom Empire (Mascot, 1935).

Above: Smiley Burnette and Peter Potter get tough with a Muranian senty in The Phantom Empire.

Also in 1935, Levine featured Smiley in a second serial, The Adventures of Rex and Rinty, which featured animal stars Rex and Rin Tin Tin Jr. as (respectively) the “god-horse” of a remote island stolen from his native haunts and a stray dog who befriended the horse. Kane Richmond portrayed the polo-playing human hero who protected Rex from unscrupulous sportsman Harry Woods, and Smiley was Jensen, a kindly polo-club stablehand who assisted Richmond against Woods. Smiley’s role in Rex and Rinty was not large, but it did give him the chance to engage in some endearing byplay with the serial’s animal leads, briefly “prac-tize” on the guitar, take a few pratfalls–and show some genuine ingenuity in a lengthy sequence during which he cleverly dodged from one end of a barn to another, while kicking and whinnying to convince the villains that they were on the trail of the coveted Rex.

Above: Smiley Burnette, Norma Taylor, and Rin Tin Tin Jr. in The Adventures of Rex and Rinty (Mascot, 1935).

In 1935, Mascot merged with Monogram Pictures and Consolidated Film Laboratories to form Republic Pictures. The year of the merger, the new studio released Gene Autry’s first starring feature, the B-western Tumbling Tumbleweeds–which co-starred Burnette as Autry’s sidekick “Smiley.”  In Autry’s next Republic feature, Melody Trail (also 1935), Burnette played a character called “Frog Millhouse,” a moniker he would retain in almost all his subsequent Republic films. Autry soon became one of Republic’s premiere moneymakers, while Burnette became scarcely less popular at the box office. Smiley continued featuring in Autry’s movies, while Republic tried to find additional ways of exploiting the comic. In 1936, they rather jarringly inserted him into Undersea Kingdom, a science-fiction cliffhanger that dealt with a journey to the lost realm of Atlantis. The serial was completed when some Republic executive apparently decided to add Smiley and Frankie Marvin (another musician who had come west with Autry) as a pair of comic sailors named Briny and Salty. The duo never interacted with the other characters, and only appeared in about half-a-dozen scenes–mildly clowning around on the heroes’ submarine, then making comically unsuccessful attempts to escape from Atlantean captors. Burnette and Marvin were given virtually nothing to work with in the way of business or dialogue, and their scenes came off as something of a waste of time.

Above: Frankie Marvin and Smiley Burnette fool around with Sinbad the Parrot in a publicity still for Undersea Kingdom (Republic, 1936).

Dick Tracy (1937), marked Republic’s last attempt to feature Smiley outside of B-westerns. He was cast as Mike McGurk, a rather accident-prone G-man who helped Dick Tracy (Ralph Byrd) track down a gang of criminals called “The Spider Ring.” Smiley’s comic antics (catching his feet in mop buckets, accidentally driving a motorcycle off a dock) were amusing, but out of place in the fast-paced and rather moodily atmospheric serial. However, his amiable clumsiness did contrast well with the energetic efficiency of star Ralph Byrd, and his character was genuinely helpful in fight scenes when not otherwise occupied with slapstick routines. Overall, though, it was clear that Burnette’s comedy was not suited to Republic’s developing serial format, which concentrated on action and left little time for comic interludes; Dick Tracy would be Smiley’s final serial. 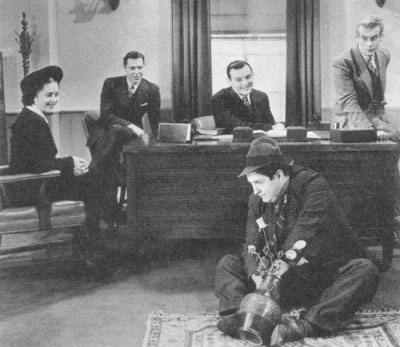 Above: Smiley Burnette gets his hand stuck in a flower vase in Dick Tracy (Republic, 1937), to the amusement of (left to right) Kay Hughes, Richard Beach, Ralph Byrd, and Fred Hamilton.

Above: Smiley, Kay Hughes, Ralph Byrd, and Ann Ainslee assist the recumbent Fred Hamilton after a skirmish with gangsters in Dick Tracy.

Smiley continued playing Frog Millhouse in Gene Autry’s films until 1942, when Autry went into the Air Force. Republic then paired Smiley with other stars, among them Roy Rogers, Eddie Dew, and Bob Livingston, before giving him top billing in a series of B-westerns that co-starred Republic newcomer Sunset Carson. His Republic contract expired in 1944, and, after a year’s hiatus from movie work, he signed with Columbia Pictures and became the designated comedy relief in their Charles Starrett B-westerns. Smiley remained a fixture in the Starrett films until the series ended in 1952; by then, Gene Autry was making films at Columbia as well, and Smiley reunited with his first saddle pal for several more films–the last of which was fittingly called Last of the Pony Riders. This B-western, the theatrical swan song for both Smiley and Gene, was released in 1953; Burnette dropped out of screen work for the next twelve years, making many personal appearances, performing on radio, and for a time running a small California chain of “Checkered Shirt” drive-in restaurants. He got back into harness in 1965, playing rustic railroad engineer Charlie Pratt on the TV sitcom Petticoat Junction. Smiley revived aspects of his old B-western persona on the show, and was also given several opportunities to demonstrate his still-sharp musical talents, to the delight of audiences that contained many now-grown fans of his movie work. He worked on Petticoat Junction (and its spin-off show Green Acres) until his passing in 1967.

Smiley Burnette’s B-westerns, particularly his Gene Autry films, show him as one of the most talented comedians ever to work in matinee fare; his serial output is much less distinguished, mainly because the genre’s form left little room for the songs and comic routines Burnette excelled in. However, it was a serial (The Phantom Empire) that introduced Smiley’s persona to the movies and established his rewarding screen partnership with Autry; the cliffhanger marked the beginning of a beautiful friendship not only for Smiley and Gene, but for Smiley and his audiences as well.

Above: Smiley in a publicity photo with his horse “Ringeyed Nellie.”

Acknowledgements: I’m indebted to the excellent Smiley Burnette website, maintained by Burnette’s children, for much of the biographical information in the preceding article. My thanks also to the Old Corral’s page on Burnette for additional information.