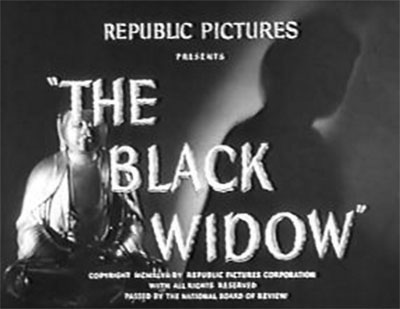 When several people connected with nuclear scientist Henry Weston (Sam Flint) are murdered by spider venom, a newspaper called the Daily Clarion commissions popular mystery writer Steve Colt (Bruce Edwards) to investigate and unmask the culprit, known only as The Black Widow.  The Black Widow is actually Madame Sombra (Carol Forman), an ostensible fortune-teller who is really the daughter of the Asian despot Hitomu (Theodore Gottlieb). Hitomu is plotting to conquer the world, and it’s Sombra’s job to further her father’s plans by stealing the atomic rocket motors that Weston is developing. Much to the surprise of Sombra, Hitomu, and their helpers Ward and Dr. Jaffa (Anthony Warde and I. Stanford Jolley), the “story-book detective” Colt manages to defeat their schemes, with the help of Clarion reporter Joyce Winters (Virginia Lindley).

The Black Widow’s story–a hero protecting a scientist and his MacGuffin from a gang of power-hungry criminals–is indistinguishable in outline from that of many other Republic serials, although it does feature some memorably colorfully fantastic devices, particularly Hitomu’s teleportation chair, the mechanical spider that emerges from a seat in Sombra’s parlor, and Sombra’s rubber face-changing masks–which, like the similar devices in Mascot serials like Mystery Mountain, entertainingly but implausibly seem to change not only her face but her physical appearance as well.

Above: Carol Forman prepares to turn herself into Ramsay Ames (whose picture is on the dressing-table) by means of a rubber mask.

However, the feature that really makes Black Widow distinctive–and also makes it one of the studio’s best post-war serials–is its dialogue, which manages to bring some atypical humor to the Republic formula without impairing that formula’s typical elements action and suspense. Screenwriters Basil Dickey, Franklin Adreon, Jesse Duffy, and Sol Shor unexpectedly but very entertainingly inject innumerable funny lines (including a few in-jokes) into their script–chiefly in the non-stop bantering scenes between hero and heroine and in some of henchman Anthony Warde’s interactions with his bosses (his oafish character’s first meeting with the supercilious Hitomu is especially priceless).

Although the writers drop the credibility ball badly in one instance (Steve Colt really should be able to recognize Sombra when she’s arrested midway through the serial), their plot structure is stronger overall than the loosely related series of hero-villain duels in many other Republics of the same period. Story cohesion is strengthened mightily in Widow by the fact that the villains remain focused on a single goal–purloining the atomic motors–throughout; all supplementary action is neatly linked to this overarching plot thread. Additionally, the script actually allows the heavies to capture their long-sought prize in the penultimate chapter, making Chapter Thirteen very suspenseful as our hero races against time to stop the teleportation of the motors to Hitomu’s country–and also to save the captive heroine, whose plight is made more urgent by the fact that Sombra and her gang have succeeded in cold-bloodedly murdering several sympathetic characters at earlier points in the chapterplay.

Above: Carol Forman’s poisonous mechanical spider is about to eliminate the unsuspecting Keith Richards in the serial’s eerie opening scene.

The serial’s action scenes, directed by Spencer Bennet and Fred C. Brannon and staged principally by Tom Steele (doubling Bruce Edwards) and Dale Van Sickel (doubling Anthony Warde as well as playing incidental henchmen), with occasional assists from Duke Green and Bud Wolfe, are not as spectacularly destructive as in Republic’s war-era serials, but are very good nonetheless (as well as being more evenly-spaced in the narrative than many of the fights in Bennett’s earlier serials). Some standouts include the Chapter Two fight that takes Steele, Van Sickel, and Green all around a chemical-company’s warehouse and up a flight of stairs to a platform above an acid vat, the fight between Steele, Van Sickel, and Wolfe in the Clarion office in Chapter Seven, and the well-shot fight inside the out-of-control cargo plane in Chapter Four between Steele and Van Sickel, during which the plane dips, rolls, and continually threatens to pitch the combatants (and a trunk containing heroine Virginia Lindley) out of an open door. 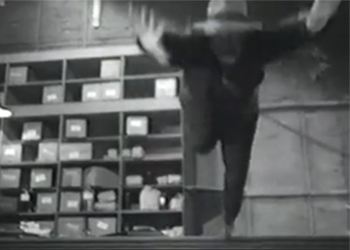 Above left: Duke Green leaps directly at Tom Steele (and the camera). Above right: Dale Van Sickel and Tom Steele fight on the platform above the acid vat. Both shots are from the Chapter One chemical-warehouse fight.

The serial’s chapter endings use several well-blended stock-footage explosions from earlier serials (among them Daredevils of the Red Circle, Federal Operator 99, and Captain America), but also include some original sequences, one of the best being the low-key but scary Chapter Nine ending, in which a hospitalized Bruce Edwards is attacked by a syringe-wielding Carol Forman. Edwards’ apparent plunge into the acid vat at the end of Chapter Two is also memorable, as is Virginia Lindley’s near-beheading by a shard of broken glass and Edwards and Lindley’s apparent immolation in a flaming mine tunnel. 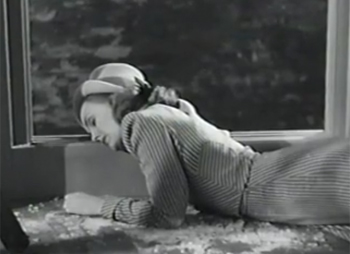 Above: The unconscious Virginia Lindley is endangered by a “glass guillotine,” which (loosened by a sound-wave machine) slides towards her at the end of Chapter Six.

The lanky, drawling Bruce Edwards makes a likable but frequently under-energized hero. His performance veers from cheerfully enthusiastic to soporific; he’s at his worst in some of his dialogue scenes with Sam Flint, and at his best in his bantering interchanges with the breezy Virginia Lindley, in which he delivers his lines in wry, affectionately exasperated fashion (“What in the name of all that’s idiotic are you doing in there?”) Miss Lindley herself is not only attractive but also one of Republic’s most vivacious serial heroines, tossing wisecracks at Edwards (“What next, Sherlock?”) with unflagging energy; she also plays her character so good-humoredly that her breezy sarcasm never seems unpleasant or abrasive in the slightest.

Above: Virginia Lindley and Bruce Edwards.

Carol Forman gives Sombra a cruel arrogance that’s quite frightening at times, particularly when she smiles at her mechanical spider’s elimination of a victim or when gloats at prisoners before ordering them killed. Anthony Warde is brutish and nasty as her henchman, but gives a bombastically humorous edge to his characterization, particularly when grumbling about the difficulties that Steve Colt is causing him. I. Stanford Jolley is also highly distinctive as the smooth and dignified Dr. Jaffa. The byplay between the haughty Forman, the thuggish Warde, and the reserved and intellectual Jolley furnishes several humorous but not overly tongue-in-cheek moments throughout the serial; one of the best comes when Jolley condescendingly points out that Forman has confused a test tube with its booby-trapped duplicate, causing her to cover her embarrassment by snapping irritably at Warde–who, in turn, reacts with amusing sulkiness. 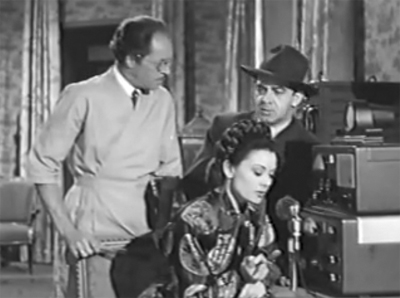 The white-haired and slow-talking Sam Flint is his usual dignified self as Professor Henry Weston, while Gene Roth–usually a heavy–is likably genial as the Daily Clarion editor, particularly when he amusedly tries to mediate between the bickering Edwards and Lindley. Theodore Gottlieb, despite his diminutive appearance and silly-looking costume, uses his crafty features and his hissing, heavily-accented voice to make his Hitomu appropriately creepy.

Above: Theodore Gottlieb’s Hitomu materializes in the back room of Sombra’s HQ.

The serial’s supporting cast has a larger quotient of colorful character actors than many later Republic serials. Ernie Adams is delightful as Blinky, the shifty street photographer who appears in multiple chapters as Sombra’s lookout man, while Stanley Price has a good one-episode role as a slick and duplicitous bookstore owner. LeRoy Mason pops up as a crooked chemist, George Chesebro takes a non-villainous turn as a film developer, and Forrest Taylor portrays a shady lawyer. Ramsay Ames, later the heroine of the serials G-Men Never Forget and The Vigilante, plays Sam Flint’s secretary, while Ralph Byrd’s real-life wife Virginia Carroll appears in old-age makeup as a female scientist. Keith Richards is an early victim of the Black Widow’s, while Hal Landon–a perennial B-western second lead–has a good part as a cheerful pilot friend of Bruce Edwards. Frank Lackteen is given a memorable cameo appearance as a Turkish tobacconist who’s allergic to his own wares, and Bob Wilke has two similarly amusing bits–one as a perplexed taxi driver and one as a comics-reading jailer. Robert Barron puts in a very brief appearance as a henchman, while other incidental henchmen are played by stunt-team members–the aforementioned Steele, Van Sickel, Wolfe, Green, along with Ken Terrell, Carey Loftin, and Ted Mapes.

It’s tempting to ascribe Black Widow’s unique qualities to the influence of producer Mike Frankovich, who oversaw a handful of Republic serials in the late 1940s before becoming a big-time producer in the fifties, sixties, and seventies–first at Columbia and then as an independent. Certainly some of Frankovich’s other serials–G-Men Never Forget, Jesse James Rides Again–also seem to show the hand of someone interested in tinkering slightly with Republic’s formula, although neither is as off-beat as Black Widow. However, whatever the reason for the serial’s anomalous quirks, they provide a perfect topper to Black Widow’s appealing combination of linear plotting and science-fiction gimmicky, turning what would have been a pleasant but unremarkable latter-day Republic serial into a distinctive chapterplay that can hold its own against many of the studio’s earlier releases where entertainment value is concerned.

5 thoughts on “The Black Widow”