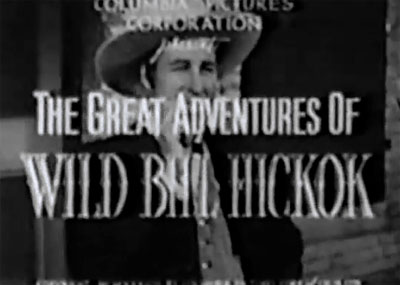 The Great Adventures of Wild Bill Hickok depicts the famed real-life lawman’s (fictional) struggle with a highly organized gang of outlaws called the Phantom Raiders. The Raiders’ leader, Morrell (Robert Fiske), hopes to force the impoverished ranchers of Texas to sell their lands and herds to him and his carpetbagger cronies at starvation prices, but the Texans instead band together to drive their cattle to Abilene, Kansas, where a railhead is soon to be established that will connect them with Eastern markets. Morrell and his men pull out all stops to prevent the cattle drive and the railroad alike from reaching Abilene, but Federal marshal Wild Bill Hickok (Bill Elliott) is appointed to clean up Abilene and keep the Chisholm Trail open for the ranchers, and defeats the Raiders with quick thinking and quicker shooting.

Bill Hickok was the first of a small group of late-1930s serials that were actually produced under the supervision of Columbia Pictures itself (specifically, overseen by studio executive Jack Fier), instead of being farmed out to independent producers like Louis and Adrian Weiss, Larry Darmour, or Sam Katzman. The budgets that Columbia allotted to these releases were absolutely lavish, not only in comparison to other studios’ serials but to many B-features; large portions of Hickok were shot on location in Moab, Utah, where the directors utilized dozens of area locals as extras; as a result, Hickok is one of the most handsomely-produced Western serials ever made. Its wagon trains (and the pioneers driving them), as well as its herds of livestock and its hordes of Indians and outlaws, were all obviously assembled just for this serial, not culled from cans of silent-film stock footage like similar groups in Universal’s Western serials of the same period.

Above: The Phantom Raiders assemble in strength in their canyon headquarters. Below: The Texans’ outfit on the trail.

Hickok’s plotting is less impressive than its production values. Both of its principal storylines–our hero’s taming of Abilene and the Texans’ perilous cattle drive–are more than compelling enough to furnish a serial narrative by themselves, and the continual shifting of the scene of action from Abilene to the Chisholm Trail is often jarring. Additionally, this repeated scene-changing sometimes denies needed screen time to sequences that warrant more attention–particularly the death scene of the Texans’ leader Cameron, a heroic character whose passing is handled in an abrupt and undramatic fashion.

One suspects that writers George A. Durlam, George Rosener, Charles A. Powell, Dallas Fitzgerald, and Tom Gibson took this dual-storyline approach because it allowed them to cram in as many Western plot devices as possible, both of the town-taming and the pioneering variety; unfortunately, the result often leaves the viewer feeling that he’s watching two separate chapterplays melded together, despite Hickok’s periodic (and highly improbable) marathon rides from Abilene to the cattle drive and back again.

However, despite the clumsy stitching of its plot threads, Bill Hickok is well worth watching. Although its action scenes are set in a rather shaky framework, they are consistently excellent, even though almost none of them center around fistfights. Instead, gunfight sequences and horseback chases take center stage here, the latter deriving extra interest from the aforementioned location work. It’s great fun to watch Hickok and various heavies pursue each through the distinctive Utah locales (some of them the same landscapes utilized in John Ford’s A-films) instead of more familiar California landscapes like Iverson’s Movie Ranch and Corriganville.

Above: Bill Elliott (or his stunt double Ted Mapes) rides his pinto across the wild landscape of Moab.

As for the gunfights, they’re vivid and exciting, and almost invariably result in casualties, unlike the bloodless gun battles in Columbia’s later Overland With Kit Carson; Hickok’s face-to-face gun duels with various heavies are particularly memorable. Some standouts among these tense sequences include the barroom showdown between Hickok and the “Apache Killer,” Hickok’s grim confrontation with the cowardly Stone (Eddy Waller), and the sequence in Chapter One that has Hickok coolly dealing with two desperadoes who are terrorizing the town. This last scene also introduces Hickok to the serial, giving him one of the most dramatic entrances of any cliffhanger hero. 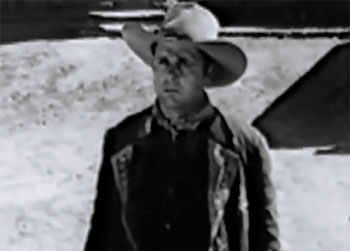 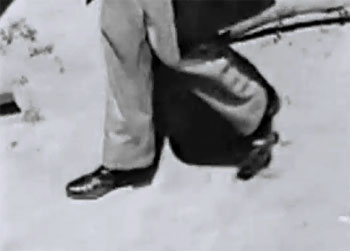 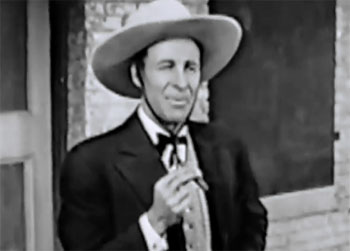 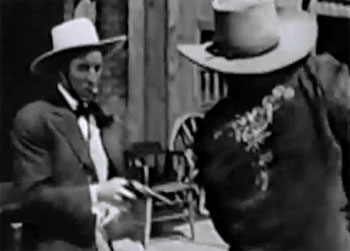 Above: Shots from the sequence that introduces our hero, in which swaggering outlaw Edmund Cobb meets an unexpected doom at the guns of self-proclaimed “peaceable man” Bill Elliott.

Other, more standardized action scenes are very good as well, helped considerably by the serial’s production values; the Raider attacks on the cattle drive throughout the serial and the stampede sequences in Chapters Two and Fourteen are done on a spectacular scale, as are several of the cliffhanger sequences–particularly the explosion of a railroad bridge and the villains’ attempt to destroy the Texans’ river-fording wagons with burning driftwood. And, although the serial occasionally misses opportunities for drama in some of its non-action scenes (as described above), other moments are truly moving–particularly the death of Frankie Darro’s character “Little Jerry” and the Texans’ embarkation on their cattle drive in Chapter One–prefaced by a heartfelt moment of prayer and accompanied by a rousing rendition of “Dixie.”

Although Hickok’s cast is large and filled with memorable performers, the action is largely dominated throughout by Bill Elliott’s excellent performance in the leading role. Unaffectedly affable in his interchanges with other good guys, earnest and forthright when disputing with hostile Indians or timorous citizens, sly and cagey when verbally fencing with heavies, and ominously grim when gunning said heavies down, Elliott is so charismatic and so distinctive a hero that it’s not surprising that Hickok established him instantly and firmly as a popular matinee cowboy; he would eventually star not only in serials and B-westerns, but A-westerns as well.

Elliott takes center stage throughout, but the supporting cast members of Hickok are still given some opportunities to shine. Former silent-film hero and usual sound-era heavy Monte Blue is excellent as the heroic Texas rancher Cameron, coming off as rugged, dignified, and nobly devoted to his cause. Carole Wayne–as his daughter and the serial’s nominal leading lady–has little to do, but conveys a similarly fiery pioneer spirit. Reed Hadley, as her love interest and Blue’s second-in-command, is tough, likable, and self-assured, functioning as a sort of surrogate hero in the cattle-drive sequences that don’t feature Elliott.

Kermit Maynard is very good as the shrewd and capable scout Kit Lawson, while Roscoe Ates manages to be funny without becoming annoying as the jumpy, frog-voiced bartender Snakeye. Monte Collins is also amusing as the eccentric “printer’s devil” Danny, whose ill-conceived “inventions” cause nothing but chaos for him and Ates. Earle Hodgins, usually a blustering snake-oil salesman, plays things completely straight as Collins’ upright and courageous newspaper-editor boss.

Frankie Darro only appears sporadically, but is very likable as the runaway Jerry–an adoptive member of an Indian tribe, a helpful aide to Elliott, and a kindly big-brother figure to Dickie Jones (as the youngest member of the Texans’ cattle drive). Jones is energetic and appealing but never too “cutesey;” he and Darro do an outstanding job of acting in the latter’s almost heart-rending death scene. Yet another talented serial juvenile, Sammy McKim, plays a key role as a spunky and resourceful Abilene youngster who heads up the “Flaming Arrows,” a crew of local kids that Elliott periodically calls on for assistance in gathering informaiton (this slightly hokey plot device, made less silly through McKim and Elliott’s good rapport, was part of a merchandising gimmick intended to draw youthful viewers to showings of Hickok; Flaming Arrow membership badges were offered to purchasers of theater tickets). Incidentally, David McKim, Sammy’s older brother, makes a rare screen appearance as another member of the Arrows. 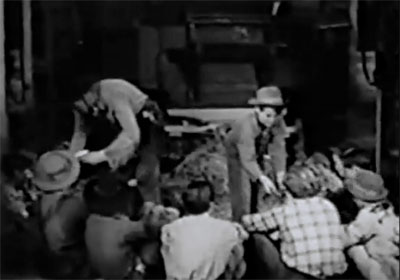 Above: Bill Elliott and Sammy McKim distribute badges to the members of the Flaming Arrows.

Robert Fiske, an expert serial heavy, is grim, poker-faced, and intimidating as the villainous Morrell, but sadly spends most of the serial in his cave hideout and rarely interacts directly with the other characters, except when berating his henchmen; he’s not even granted the honor of a final shootout with Elliott. Most of the active villainy is handled by Eddy Waller as the sneering Stone; Waller, generally benevolent in his screen roles, plays very effectively against type, making his character nasty, overbearing, and hateful, while giving a slightly comic tinge to the villain’s outbursts of cowardice and bad temper. 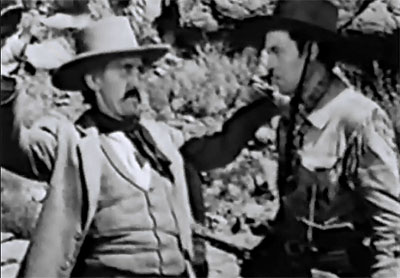 Above: Eddy Waller and Bill Elliott.

Walter Wills is good as Bruce, the villains’ nervous but very crafty lawyer, while Australian-born J. P. McGowan is suave and almost distinguished as Scudder, one of the leading Phantom Raiders and their inside man on the cattle drive. The perennially snarling Al Bridge and the husky, drawling Slim Whittaker serve as the other principal henchmen, and are supported by–among others–Tom London, George Chesebro, Blackie Whiteford, Art Mix, Joe McGuinn, and Edmund Cobb. Richard Cramer has a wonderful extended cameo as the Apache Killer–sneering, leering, and smirking delightfully before getting gunned down.

Hal Taliaferro is a genial townsman, Edward Hearn a cattle buyer, William Gould a railroad man, and Edward Brady a courageous stage agent. Lee Phelps oddly starts the serial as the helpful town blacksmith, is replaced halfway through by Kenne Duncan (who wears the same outfit and seems to be the same character), and takes his role back again in the final chapter. Frank Lackteen, as sinister-looking as ever, has a one-chapter appearance as a half-breed renegade called the Vulture, while Chief Thundercloud and Ray Mala (despite high billing), appear only briefly as friendly Indian chief Gray Eagle and his son Little Elk.

Disjointed though it is, The Great Adventures of Wild Bill Hickok’s cast, locations, production values, and action scenes (both one-on-one gunfights and large-scale battles) make it Columbia Pictures’ greatest Western serial. It is definitely must-see viewing, not only for fans of Wild Bill Elliott, but for all devotees of cowboy chapterplays.

Above: A publicity still of Elliott in his star-making role.

5 thoughts on “The Great Adventures of Wild Bill Hickok”