World War Two has recently ended, and, in San Francisco, the members of the “United Peace Foundation” have gathered to make provisions against future outbreaks of global hostility. One of the Foundation’s biggest worries is Sir Eric Hazarias (Lionel Atwill), a supposedly-dead international arms broker who just might be still alive–and up to mischief–in the Himalayan jungle province of Pendrang; the Foundation soon dispatches agent Rod Stanton (Russell Hayden) to Pendrang, with instructions to track down Sir Eric and thwart his plans. The professional “warmonger,” it transpires, is trying to get his hands on a native treasure called the “Glowing Goddess,” which contains an element called “Meteorium,” an element that provides a defense against the atomic bomb and would allow a nation to launch atomic attacks on its neighbors without fear of retaliation. Sir Eric plans to sell this dangerous discovery to the highest bidder, and is duping unwitting archeologist Doctor Elmore (George Eldredge) into uncovering the Lost City of the Jungle in which the Goddess lies hidden. Stanton, with the help of fellow agent Tal Shan (Keye Luke) and Elmore’s daughter Marjorie (Jane Adams), must convince Elmore that his kindly colleague Sir Geoffrey London is really the notorious Hazarias, while battling Sir Eric’s henchmen and dealing with the attempts of Pendrang’s mercenary ruler Indra (Helen Bennett) to profit from the whole situation.

Lost City of the Jungle is much better than it has any right to be, considering that it shares the excessive talkiness of most other Universal chapterplays from that studio’s final days of serial-making–and is also plagued by scripting changes caused by the illness of lead villain Lionel Atwill (who died shortly after the serial’s release). Despite these problems, Jungle manages to be more entertaining than many of its contemporaries from Universal’s 1945-1946 period, thanks to a strong cast, an interesting setting, and the contributions of writers Joseph Poland, Paul Huston, and Tom Gibson–who not only fill their script with the large cast of interesting characters common to other late Universals, but actually manage to impart some excitement to the serial’s narrative, something far rarer in Universal serials of this era.

That said, the first half of the serial is often slow going, as the heroes and villains repeatedly talk about the plot and their various goals while tentatively fencing with each other–Stanton trying to prove Sir Eric’s identity and discover his plans, and Sir Eric trying to kill Stanton without tipping his hand to the unsuspecting Dr. Elmore. However, Jungle unexpectedly shifts into higher gear in its second half, once Sir Eric drops his mask and kidnaps Dr. Elmore; although the verbal plot-recapping continues in the subsequent episodes, the serial still becomes more fast-paced and urgent in tone from this point on, as both heroes and villains begin racing to discover the Glowing Goddess and tensions start to run high between Sir Eric’s men and Indra’s followers.

Above: Lionel Atwill shows his hand to John Eldredge in Chapter Eight–and jump-starts the storyline.

The writers, however, are unable to work successfully around Lionel Atwill’s illness; neither are the serial’s producers and directors. Four sequences (in Chapters 1, 4, 11, and 12) utilize a double for the ailing actor in long shots, intercut with close-ups of Atwill; these scenes are awkward at times, but much greater damage is caused by the insertion of another character, Sir Eric’s “secretary” Malborn (John Mylong) into the already-crowded storyline. This character is presented as Sir Eric’s secret boss and the true “brains” behind his schemes; this silly idea not only jars with Atwill’s masterful demeanor towards the other villains (for obvious reasons, Atwill and Mylong never interact on-screen) but makes the World Peace Foundation seem foolish for never realizing that the man they consider to be such a threat is nothing more than a figurehead. It would have been much simpler to make Mylong’s character a mere underling of Sir Eric’s, since about all Mylong does in the serial is bargain with Helen Bennett or give orders to action heavies George Lynn and Dick Curtis. Additionally, Curtis eventually guns Mylong down on Atwill’s supposed orders, leaving Atwill in the spotlight for the serial’s finale (the climactic footage of Atwill’s screen demise had been filmed before he took sick). Building up Mylong’s character at the expense of Atwill’s was wrong-headed enough, but giving him such a buildup and then killing him off so undramatically is truly stupid. 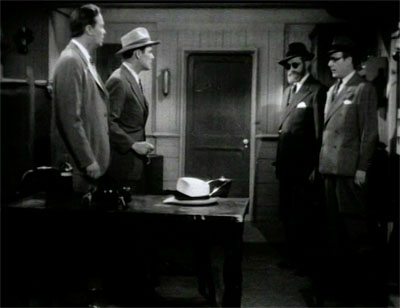 Above, from left to right: Dick Curtis, George Lynn, an unidentified double for Lionel Atwill, and John Mylong.

The serial’s chapter endings are surprisingly colorful, and are usually resolved with more imagination than in many preceding Universal serials (both 1930s and 1940s outings), in which protagonists simply lived through disasters. Some of the standout sequences have heroes Russell Hayden and Keye Luke caught in a collapsing temple, Hayden trapped in a tomb filling with poison gas, heroine Jane Adams tied in front of a gun that will fire when two mechanical elephant statues touch, Hayden facing execution in a native guillotine, Hayden trapped in a burning room as Lionel Atwill gloats over the radio, and Hayden taking a long fall into a fearsome fire pit after a fight with George Lynn and Dick Curtis. Most of the serial’s physical action takes place during these cliffhanger sequences, since it generally takes a lot of dialogue to lead up to the chapter endings; fistfight scenes are extremely sparse, although such action is handled well by directors Ray Taylor and Lewis D. Collins when it does appear.

Above: Shots from the impressive Chapter Three temple-collapse cliffhanger (it’s stock footage from a feature film, but is still very effectively utilized here).

This scarcity of incidental action scenes is partly compensated for–even during the serial’s plodding first half–by the interesting settings that our heroes and villains move through. Pendrang is the best kind of exotic serial locale, a jumbled but colorful region in which Egyptian-style tombs, jungles filled with Oriental-looking tribesmen, a riverfront area inhabited by American thugs, a populous and decidedly Arabian metropolitan area, and a glitzy modern casino can believably co-exist. Some of the serial’s “local color” is supplied by stock footage from Universal’s Jon Hall/Maria Montez exotic adventure films, but most of it is established through the extensive use of handsome sets built for Universal’s bigger-budgeted features; the twisty and sloping streets of Zalabar (Pendrang’s main city) and the ancient tunnels in which clues to the Glowing Goddess are concealed are particularly impressive. 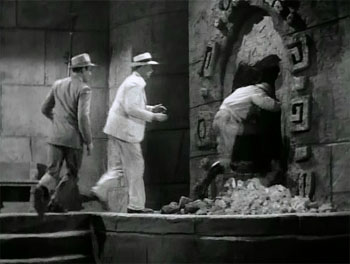 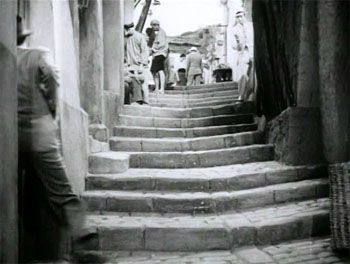 Jungle’s other great strength is its colorful cast of characters and the actors that play them. Russell Hayden–an extremely likable B-western player who supported William Boyd in many of the best Hopalong Cassidy films and starred in his own solo series as well–makes an excellent hero. As in his Westerns, Hayden here is easy-going and almost boyishly cheerful, but can convey tough determination bordering on stubbornness when necessary. His unsophisticated, cowboy-like demeanor contrasts ideally with the devious suavity of the many villains and semi-villains that surround him. 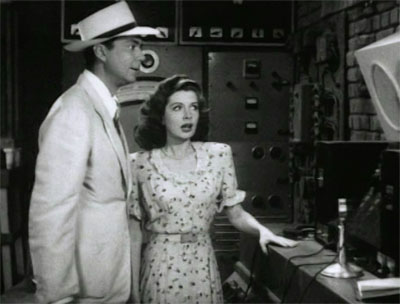 Above: Russell Hayden and Jane Adams have just finished listening in on the villains via radio.

The attractive Jane Adams is an appealing heroine, particularly during her strategy-planning sessions with Hayden, in which she comes off as cheerful and quietly plucky; the sequence in which she cleverly fakes a fit of tears in order to fool John Mylong is particularly enjoyable. Keye Luke is pleasant, politely affable, and calmly self-assured, as Hayden’s partner Tal Shan. Luke’s character, incidentally, is a married man–highly unusual for a serial co-hero; his screen wife, played by the petite and pretty Frances Chung, has comparatively little to do–although her pleasant presence does contribute some additional energy to the good guys’ interactions.

Lionel Atwill shows no signs of illness in the sequences he was able to complete; curtly authoritative, sleekly suave, and genially self-congratulatory by turns, he steals every scene he appears in. He plays his role with complete seriousness, while giving it a bit of cynical humor at the same time; he’s especially good in the delightful scene in Chapter Eight, in which he tries to pass himself off as a wronged man in order to win Dr. Elmore’s cooperation, and spins an affecting verbal self-defense–only to jauntily shrug it off and calmly summon his strong-arm men when he sees the scientist hasn’t believed him.

Above: Lionel Atwill blithely assures John Gallaudet that he won’t double-cross him, although he’s just double-crossed everyone else.

Helen Bennett is the serial’s only weak cast member; as in Royal Mounted Rides Again, she manages to overact and still be dull, shouting far too many of her lines and maintaining a flat and one-dimensionally crabby manner throughout the serial.  Ted Hecht is excellent, though, as her slick, oily, but completely steadfast aide-de-camp “Doc” Harris. Gene Roth plays their sleazy and slow-witted chief of police, who, unlike Hecht’s character, is not above betraying Bennett.

Above: A characteristically peeved-looking Helen Bennett confers with Gene Roth (in khakis) and Ted Hecht.

John Gallaudet is terrific as the treacherous and grimly determined archeologist Dr. Grebb; although his tough, down-to-earth, and tight-lipped manner is completely different from Lionel Atwill’s aristocratic villainy, Gallaudet is the only actor among the heavies who manages to be seem nearly as menacing as Atwill himself. That’s not to say that the serial’s secondary villains aren’t strong; the gruff, snappish, and sinister-looking George Lynn and the homely and hulking Dick Curtis make fine henchmen, while John Miljan does a very good job as the driven and preoccupied gang scientist Gaffron, who’s less interested in profit than in the scientific glory that the “mastery of the atom bomb” will bring him. As for John Mylong, while he’s not imposing enough (as aforementioned) to be even momentarily convincing as Atwill’s boss, he’s still effectively slick and Continental during his many bargaining scenes with Helen Bennett’s Indra. 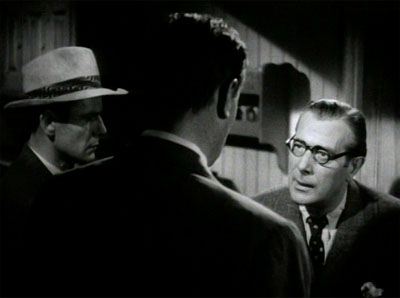 Above: John Mylong (in glasses) plots with Dick Curtis (back to camera) and George Lynn.

John Eldredge, who usually portrayed suave and slimy villains, plays very well against type as Dr. Elmore–making his character kindly, slightly absent-minded, and very good-natured; here is an endangered scientist that audiences can easily get concerned about. Eldredge’s deep-voiced and dignified brother George appears as one of the World Peace Foundation members throughout the serial, as do Mauritz Hugo, Sam Flint, and Wheaton Chambers; these gentlemen serve to recap the plot in each episode, while also repeatedly delivering irritatingly utopian propaganda speeches about the need for a global peacekeeping power to prevent future wars.

Arthur Space is amusing as the exuberant British roulette player “System” Reeves, a habitué of Indra’s casino, while Frank Lackteen has some memorable scenes as an information-peddling blind beggar. Cyril Delevanti plays the World Peace Foundation chairman in the first chapter, Ralph Lewis is the villains’ radio operator, Paul Bryar plays the casino bartender, Keith Richards is a World Peace agent murdered in Chapter One, and Clarence Lung pops up in the later chapters as a native chief.

Lost City of the Jungle is no classic, but it is a cut above The Royal Mounted Rides Again, The Scarlet Horseman, and some of the other serials from Universal’s “last gasp” years; its locales and its cast, and its surge of energy in the later chapters, make it enjoyable viewing despite its flaws. In fact, had Lionel Atwill been able to complete the serial, it might have come close to holding its own against earlier and better Universal chapterplays. 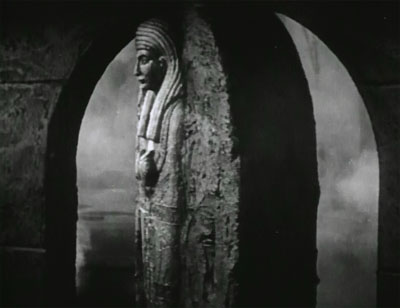 3 thoughts on “Lost City of the Jungle”