In the town of Sun Dog, cowboy “Silent” Slade (Grant Withers) is wrongfully sentenced to hang for the murder of rancher Scotty McKee, who disapproved of Slade’s courtship of his daughter Joan (Margaret LaMarr). Sheriff “Red” Davidson (Buck Jones), Silent’s best friend, helps him escape the noose, forfeiting his job as a result. The ex-sheriff leaves Sun Dog and journeys to Gomez Springs on the trail of the real murderer, a border rancher and secret rustler/smuggler named Breen (Walter Miller), who McKee once crossed in a crooked deal. Red and the fugitive Silent–who’s infiltrated Breen’s gang–begin working together to unmask the scoundrel, hoping not only to bring him to justice for his past crimes but also break up his current diamond-smuggling scheme, in which Breen’s neighbor Bob Maxwell (Charles French) has become innocently entangled. Our heroes are assisted by the faithful Joan, Maxwell cowboy Johnny Snow (Edmund Cobb), and by Maxwell’s daughter Marie–with whom both Johnny and Buck are in love. There’s also one more card in the deck in the person of Breen’s double-crossing associate, the wily Mexican bandit Joe Portos (Richard Cramer).

The Red Rider is easily one of Universal’s best serials; its action is solid and its pacing steady, but its greatest points of appeal are its unusually good screenplay, a terrific cast that further elevates said screenplay, and a typically charismatic leading performance by the great Buck Jones.

The serial’s script–by Basil Dickey, Ella O’Neill, Vin Moore, and George Plympton–is not only well-plotted, but full of strong characterizations, witty dialogue, and memorable moments both dramatic and comic. According to serial and pulp expert Ed Hulse, the script closely follows its credited source,  W. C. Tuttle’s pulp novel The Redhead from Sun Dog, which probably accounts in part for the above-average writing. The narrative has more than enough subplots–the hunt for a missing shipment of smuggled diamonds, Breen’s rustling forays and his later attempt to turn Silent in for a reward–to fill fifteen chapters nicely–especially since the said subplots are supplemented with an array of “character” moments both dramatic and comic. It’s those character touches that make Red Rider a great chapterplay; viewers of the serial will find themselves waiting just as eagerly for dialogue scenes as for action ones. Moments like Red’s decision to help Silent escape, Red’s subsequent resignation, Joan’s vow of undying affection for Silent, or the laconic reconciliation scene between Red and Johnny when the latter finally realizes he’s lost Marie to Red, are all truly touching. 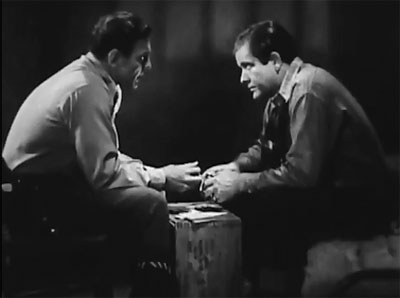 Above: Buck Jones (left) tells Grant Withers of his belief in his innocence in Chapter One.

The serial’s comic moments are just as interesting, among them Red’s prankish reactions to Johnny’s ill-advised attempts at singing, the duo’s outfoxing at the hands of Breen’s wily Chinese cook, Red’s befuddlement whenever he finds himself alone with Marie, and the bumbling antics of Joe Portos’ cousins the Abel brothers, who amusingly mangle the English language and unsuccessfully try to keep pace with the serial’s more serious badmen. Portos’ sarcastic verbal putdowns of these clownish banditos are hilarious (when he learns one of them has been wounded in the head, the bandit chief growls “then he ain’t hurt”) as are the endless stream of quips issued by Red over the course of the serial (after he rescues Marie from a runaway coach, she breathlessly exclaims “Red, that was just terrible,” to which he responds “Why, it was the best I could do”).

Although the quality of the writing frequently overshadows the action in Red Rider, the action scenes are still quite respectable. Horseback chases and running horseback gunfights dominate the action, with director Louis Friedlander–aka Lew Landers–and his camera crew doing a superb job of staging such sequences for maximum excitement value against the serial’s hilly, sweeping ranch-land locations (specifically, that frequent Universal Western backdrop the Walker Ranch, which, along with the spacious sets used for the Maxwell ranch, gives the serial some very nice visuals). The lengthy Chapter Seven chase/gunfight sequence, with the villains chasing Charles French’s buckboard as Buck Jones pursues them (transferring from horse to tree, bulldogging an outlaw off his horse, and finally jumping into the buckboard to fight Richard Cramer) is a particular standout. Others include the first-chapter chase sequence, with Jones trying to keep the posse from catching Grant Withers, and the Chapter Nine chase following the barn shootout. Jones performs a lot of his own riding stunts, but his usual double Cliff Lyons stands in for the riskier scenes. 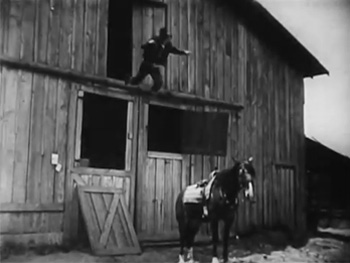 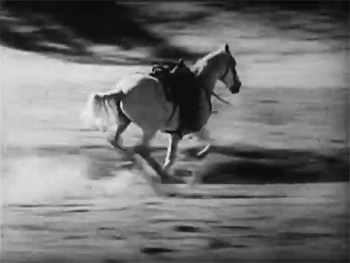 Above, top left: Cliff Lyons (dressed as  Buck Jones disguised as Grant Withers) jumps from a hayloft to Withers’ horse to begin the Chapter Nine chase. Top right: Jones gallops across the ranchland hills, as a posse (at bottom left) and his trusty horse Silver (bottom right) pursue.

There are some first-rate non-horseback action sequences as well, particularly the lengthy shootout in the tall grass in Chapter Five, the aforementioned barn shootout in Chapter Nine, and the shootout at the cabin in Chapter Twelve. The fistfight at the cliff’s edge in Chapter Six is very good as well; this and other fisticuffs bouts, though “primitive” by 1940s Republic standards, are still appealingly energetic. Cliffhanger sequences are generally unspectacular, with (apparently) fatal shootings of the hero (as in Chapters Four and Nine) and horsefalls (as in Chapters One and Six) predominating; one episode ending (in Chapter Ten) features no bigger threat than Richard Cramer getting the drop on Buck Jones. This low-key approach to the chapter endings is not at all bothersome here, since more involved set-pieces would have disturbed the smooth flow of the narrative.

As for the serial’s cast, it’s excellent from top to bottom–although, as in most of his serials, Buck Jones dominates the proceedings. Adept at dramatic scenes (his stunned reaction to his friend’s death sentence in the first chapter is a strong example) but even better at deadpan comedy, he’s a delight to watch as he verbally fences with villains, tosses off wry one-liners, bemusedly reacts to comical situations, or clumsily deals with romantic matters.

Above: Buck Jones straps on his gun-belt for battle, blithely unaware that Marion Shilling is worrying about him.

Grant Withers is similarly excellent as Silent Slade, conveying a real sadness over his character’s position as a fugitive from justice. He also does a good job with Silent’s undercover pose as one of Breen’s men, balancing an assumed thuggish surliness with flashes of cheerful sarcasm (usually at the expense of his “boss”). Marion Shilling is an attractive heroine, dreamily fond of Jones’ character but still able to good-naturedly laugh over his frequent awkwardness. Margaret LaMarr, as Shilling’s best friend and Withers’ sweetheart, has fewer lines but is equally appealing–particularly when her character is demonstrating quiet but determined loyalty to Withers’. 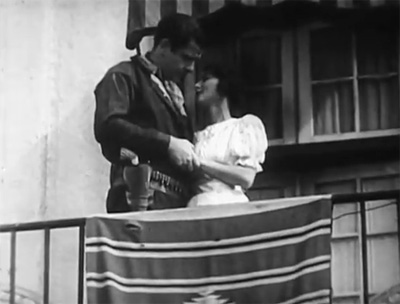 Above: Grant Withers and Margaret LaMarr in a brief romantic interlude.

Walter Miller plays Breen with sly, icy arrogance, delivering orders or outlining schemes with cold precision and a touch of smugness–but occasionally giving way to outbursts of cold rage or cowardly panic. Richard Cramer is terrific as Joe Portos, sneering and leering with incredible gusto and rolling out his lines in jovial but insinuatingly menacing style; his Mexican accent is perhaps not entirely convincing, but it merely adds to the colorfulness of his larger-than-life characterization. He and the much soberer Miller make a perfectly contrasting pair of heavies.

Above: Walter Miller and Richard Cramer make a menacing entrance, with Jim Thorpe behind them.

Edmund Cobb, in one of his best serial roles, makes an excellent “sidekick” (actually, he’s almost a co-hero at times). He comes off as doggedly dependable throughout, but is also very funny in a quiet way, what with his thoughtful but slightly slow reactions to various situations and his tone-deaf attempts at serenading the heroine. Monte Montague and Jim Thorpe (yes, the Jim Thorpe) are also very funny as the dimwitted Abel brothers; they interact like a classic comedy team, with Montague garrulous and dopily self-confident and Thorpe slow-talking and perpetually confused.

The elderly Charles French is dignified if not particularly distinctive as the heroine’s somewhat gullible father; his performance, though solid, is easily the least memorable one in the serial. Walter Miller’s back-up henchmen are played by Jim Corey, Al Ferguson, and Bud Osborne–a wonderfully tough, colorful, and weather-beaten trio of badmen. Chester Gan has a small but important part as Miller’s wily Chinese cook, J. P. McGowan plays murder victim Scotty McKee, and William Desmond is the intelligent and fair-minded sheriff of Gomez Springs.

Lee Beggs is good as the lovably gabby mayor of Sun Dog, who tries to prevent Jones from handing in his badge in the first chapter; J. Frank Glendon has a small role as the smug Sun Dog town attorney, Tom Ricketts is Sun Dog’s judge, and John Merton (in his serial debut) is the aggressive cowboy who first accuses Grant Withers of murder. Robert McGowan plays an ill-fated accomplice of Walter Miller’s, and Frank Rice is Jones’ comic deputy in Sun Dog. Last but not least, a young Dennis Moore–much more easygoing than in many of his later serials–has a noticeable part as a Maxwell ranch hand named Slim, who periodically provides Jones, Withers, and Cobb with assistance.

Dramatic and emotionally involving, but ultimately light-hearted, The Red Rider is one of the most appealing and enjoyable serials Universal ever put out, a well-plotted and well-directed mixture of action and strong characterization performed by a stellar cast. Though often overlooked by fans (partly because good prints of the serial are hard to find), virtually no serial-watcher, once introduced to Red Rider, has failed to appreciate its tremendous entertainment value.

Above: Buck Jones’ Red Rider in a characteristic shot.

5 thoughts on “The Red Rider”