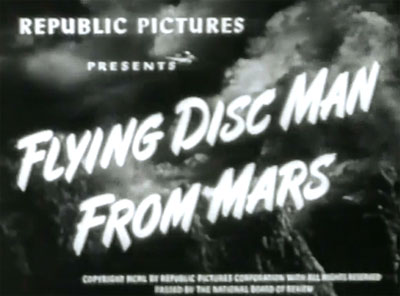 Former Air Force pilot Kent Fowler (Walter Reed), who has been running an aerial security service since the end of the war, is recruited by scientist and aircraft manufacturer Dr. Bryant (James Craven) to help him track down a mysterious “unidentified flying object” that has been hovering over Bryant’s plant each night. Fowler succeeds in shooting down the UFO during a night patrol over the factory, but the aircraft’s pilot survives the crash and is met at the crash site by Bryant. The pilot is one Mota, (Gregory Gay), a scientist from Mars, and the intrigued Bryant hustles him to his laboratory for a private interview before Fowler can discover the Martian’s existence. At the lab, Mota reveals his objectives: it seems that Mars, disturbed by Earth’s discovery of the atomic power that Mars has possessed for over a century, is determined to make sure that the upstart Earthlings do not endanger the rest of the solar system with their newfound knowledge. Mota has been scouting Earth’s defenses in preparation for a Martian conquest of the planet, and offers Bryant the governorship of Earth once the conquest is complete. Bryant (who, it turns out, was a secret Nazi collaborator during the war) agrees to the scheme, and he and Mota begin plotting to acquire enough atomic weaponry to aid the Martian agent in softening up Earth’s defenses. Soon, they’ve built a new “flying disc” like the one Mota arrived in, and are busily assembling an atomic arsenal with the help of criminals Drake and Ryan (Harry Lauter and Richard Irving).  It will be up to Kent Fowler, his pal Steve (Sandy Sanders), and their secretary Helen Hall (Lois Collier) to defeat the Flying Disc Man From Mars, despite their inferior Earthling technology.

Flying Disc Man From Mars is typical of Republic’s low-budgeted 1950s serials: most of its chapter endings are composed of stock footage from earlier and bigger-budgeted Republic serials, while its new action scenes are much less spectacular and energetic than their 1940s predecessors. And yet, Disc Man, like most of Republic’s other serials of the period, manages to be briskly-paced and enjoyable; the studio, even at this late stage in their production history, was still handling serial-making with professionalism if not inspiration. The stock footage is well-integrated and only recognizable to those familiar with the studio’s earlier output, the new props are still handsome (particularly the ray machine tested in Chapter One and the mini-rocket used for collecting extortion money in Chapter Nine), and the new action scenes are still directed at a nice clip by Fred C. Brannon–even though they lack the imagination that characterized stunt sequences in Republic’s glory days. The principals also manage a few trips out to Iverson’s Ranch, giving the action some much-needed visual variety; the occasional outdoor scenes around Bryant’s factory are a welcome touch as well. 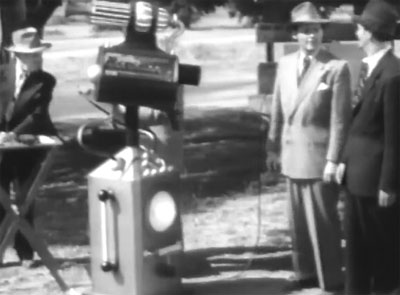 Above: James Craven (far right) shows Walter Reed (light suit) a ray gun during a test out at Iverson’s. Dave Sharpe is on the far left.

The aforementioned action scenes rely less heavily on fistfights than the Republic serials of the 1940s did, more for financial reasons than artistic ones (breakaway props had to be carefully husbanded on reduced budgets). As a result, Disc Man’s action sequences are actually a rather well-balanced mixture of fistfights, gun battles, aerial combats between Fowler’s plane and the semi-disc, and car chases. Dale Van Sickel doubles star Walter Reed, while Tom Steele and Dave Sharpe stand in for action heavies Harry Lauter and Richard Irving. It looks to me as if Sandy Sanders–himself a regular stunt double for Gene Autry at Columbia Pictures–is doing most of his own work in the fight sequences.

Even with Sharpe and (in one scene) Ken Terrell in the stunt cast, the fight scenes boast no set pieces to compare with the great brawls of Republic’s past. That said, such scenes as the fight among the crates in the factory yard in Chapter Four, the battle in the cave in Chapter Five, and–especially–the fight in Bryant’s office in Chapter Eleven–are all very respectably staged. The two-cornered shootout that follows the Chapter Eleven fight is also good, as is the earlier outdoor shootout at the disc’s landing field in Chapter Five and the henchmen’s determined nighttime attack on Reed at his office in Chapter Ten. Most of the serial’s cliffhanger scenes are either recycled wholly or partly from earlier serials, although a few effective new ones do pop up (particularly Reed’s near-crushing by an automatic warehouse door).

Above left: The fight in the warehouse yard in Chapter Four. Above right: Reed about to be crushed by the automatic door.

Disc Man’s script, by Ronald Davidson, cleverly weaves together stock footage from The Purple Monster Strikes, G-Men vs. the Black Dragon, King of the Mounties (from which Mota’s “semi-disc” airship, formerly that serial’s “Falcon plane” derives) and other chapterplays. By awarding Mota the impressive “semi-disc,” Davidson actually improves on Purple Monster in one regard; while that serial’s alien was continually trying to steal the plans of an Earthling rocketship, Mota is allowed to soar through the skies in his own cutting-edge Martian aircraft, making the Martian’s scientific threat to Earth seem a little more real. The bombing rampage that Davidson has Mota and his disc embark on in Chapter Eleven also heightens the Martian’s menace, although Republic buffs will recognize the resulting explosions as a sort of “greatest hits” parade of Lydecker miniatures from 1930s and 1940s Republic outings.

Above: The “flying disc” lands in its secret volcano hangar.

Disc Man is well-served by its cast, almost all of whom give energy to their rather mundane dialogue. The gruff-voiced Walter Reed snaps out his lines in toughly determined fashion, while also managing to look beliveably worried when engaging with the flying disc or cornered in his office with his gun empty. The lovely Lois Collier has little to do but exchange expository dialogue with Reed, but gives warmth and a touch of humor to these scenes–and, like Reed, actually conveys realistic worry and concern in hazardous situations. Drawling, rugged-looking Sandy Sanders is the least lively of the three leads; a stuntman by trade (as mentioned above), he’s likable enough but delivers his dialogue in very under-energized fashion.

James Craven gives an entertaining performance as the treacherous Dr. Bryant, about halfway between his ranting heavy turns in his Columbia serials and his slicker villainous characterizations in previous Republic chapterplays. Bryant, unlike most outwardly respectable brains heavies, makes little effort to hide his duplicity from the heroes; the scenes between the blustering Craven and the suspicious Reed (whose character gradually goes from regarding Craven as an irritating eccentric to recognizing him as an obvious villain) are some of the serial’s most enjoyable; Craven’s rather petulant and crestfallen reactions to periodic rebukes by his co-conspirator Gregory Gay are also quite amusing. Gay himself spends most of his time barking orders at Craven over the radio, but gives real energy and fanatical vigor to his many rants about the need to conquer Earth. He displays a distinctive suavity when dealing with less dramatic lines, and is entertainingly condescending when talking about the superiority of Martian technology. Too frequently dismissed as a weak villain, Gay is actually one of the more colorful of Republic’s 1950s serial heavies. 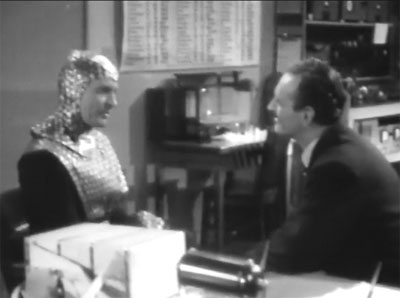 Above: Gregory Gay and James Craven.

Harry Lauter is excellent as the chief henchman, stealing several scenes with his offhand but crafty line delivery and his smugly cynical facial expressions. Richard Irving (later a successful TV producer and director and the helmer of the first Columbo TV-movie) is also good as Lauter’s partner in crime; his raspy voice and harsh features are well-suited to the part. Michael Carr, however, is extremely bland as Gay’s villainous disc pilot. Stuntmen Tom Steele, Dale Van Sickel, Carey Loftin, Ken Terrell, Dave Sharpe, John Daheim, Chuck Hamilton, and Sol Gorss all appear as henchmen, watchmen, truck drivers, and other incidental characters–but play only one role apiece, eschewing the multiple appearances they made in Republic’s 1940s serials/

Flying Disc Man From Mars is not particularly memorable, distinguished, or imaginative, but neither is it dull or uninteresting; its compact thirteen-minute chapters move quickly and make for entertaining if forgettable viewing. Admirers of Republic’s unsinkable serial-making professionalism or fans of stars Reed, Collier, Craven, and Lauter (I fit into both categories) will get more pleasure out of it than the casual viewer would, but even the casual viewer should be able to appreciate the slickness of Disc Man’s production values and the sureness of its pacing.

Above: Walter Reed and Lois Collier make their escape inside the disc in the final chapter.