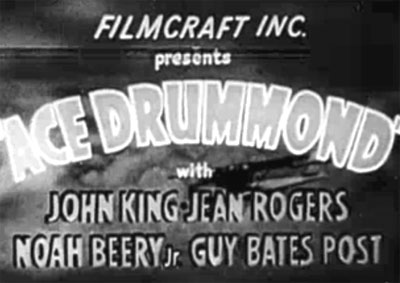 In remote Mongolia, a company called International Airways is trying to establish a base for their air route linking East and West. However, the company is being plagued by a ruthless and mysterious criminal known as the Dragon, who has been destroying their planes via a deadly “radio death ray.” Pilot and investigator “Ace” Drummond (John King), a “G-man of the air,” is brought in as a troubleshooter, and soon finds that the Dragon’s terroristic attacks are linked to the disappearance of the archeologist Professor Trainor (C. Montague Shaw). The Professor has discovered a priceless mountain of jade, and the Dragon is trying to force him to reveal its location, while simultaneously trying to keep International Airways out of Mongolia so their air-base construction won’t inadvertently uncover the mountain. Ace must first discover the existence of the jade mountain, and then puzzle out the identity of the Dragon himself. Is the culprit Henry Kee (James Leong), International Airways’ Mongolian board member? Or is it Bauer or Wyckoff (Fredrik Vogeding and Al Bridge), two crooked archeologists? Other suspects include Winston (Robert Warwick), another International Airways official, Johnny Wong (James Eagles), the company’s radio operator, and Kai-Chek (Chester Gan), the belligerently anti-Western disciple of the peaceful High Lama (Guy Bates Post). With the help of Trainor’s lovely daughter Peggy (Jean Rogers), trusty mechanic Jerry (Noah Beery Jr.), and young Billy Meredith (Jackie Morrow), the son of International Airways’ chairman, Ace rescues Trainor, defeats the Dragon’s henchmen, and discovers the master criminal’s identity.

Above: Ace, in his memorable introductory sequence, rights a plane whose pilots have been knocked out by the radio death ray.

Ace Drummond, with its fast-moving storyline, fantastic plot trappings, and mystery-villain angle, feels more like an unusually high-budgeted Mascot chapterplay than a successor to the entertaining but down-to-earth and relatively realistic Universal serials that proliferated in the first half of the 1930s. This resemblance is no coincidence; producer Barney Sarecky, director Ford Beebe and writer Wyndham Gittens had all worked extensively on Mascot serials before making Drummond, their first Universal outing. Writer Ray Trampe hailed directly from Mascot as well, while the serial’s third writer, Norman S. Hall, had one earlier Universal serial (Tailspin Tommy) to his credit, but had also worked chiefly at Mascot; only co-director Cliff Smith was a regular Universal staffer. Sarecky, Beebe, Gittens, Trampe, and Hall would all continue as key members of Universal’s serial-making team for the next several years–with the latter four remaining at the studio even after Sarecky relinquished his producer’s spot to Henry MacRae, who had held the position before the Mascot incursion.

Drummond benefits greatly from the importation of Mascot talent; few pre-Flash Gordon Universal serials moved at as speedy a clip, and few of them carried as strong a sense of real danger in their action scenes (both good guys and bad are killed off in Drummond, unlike most of the heroes and heavies in earlier Universals). Vestigial Mascot flaws are also evident in Drummond’s handling of its mystery villain, but the less hectic production schedules at Universal apparently gave the writers more time to work inconsistencies out of their script–although there is one unexplained attack on the guilty suspect by someone who certainly seems to be the Dragon. The scripting team do take the trouble to logically explain the dubious behavior of the various innocent suspects, and provide adequate motivation for the most antagonistic suspect’s abrupt switch from hostility to friendliness in the final chapter. Additionally, while Gittens and company typically included only one rational and well-behaved supporting player–who invariably turned out to be the heavy–in their Mascot scripts,  Drummond features multiple non-suspicious background characters who serve as dark-horse culprits, making it much harder to guess the villain’s identity. Here again, the ex-Mascot staffers benefited from Universal’s superior budgets, which allowed for a larger cast of actors than Mascot could have mustered. 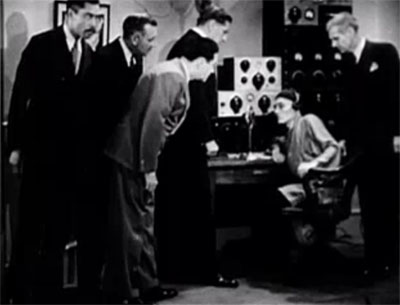 Above: James B. Leong, Hooper Atchley, Sam Ash, Robert Warwick, James Eagles, and Selmer Jackson–who only represent a little more than half of the serial’s total suspect muster.

The serial’s action scenes are a very effective mixtures of car chases, gun battles, fistfights, and aerial combat sequences. Among the standouts are the cross-country chase scene in Chapter Three that has John King and Noah Beery Jr. pursuing the villains’ car on a motorcycle, the cavern shootout in Chapter Seven, the shootout on the hillside in Chapter Eight, the lengthy fistfight between King and Al Bridge (doubled by Eddie Parker and Tom Steele, respectively) in Chapter Eleven, and the Chapter Twelve encounter between the “Dragon Squadron” and Ace’s plane, as the hero tries to stop them from bombing the airport. The car chase in Chapter Four, with King and Beery trying to escape from a carload of rifle-toting thugs along hairpin turns, is also very exciting, as is King’s nimble rooftop escape from hostile monastery guards in Chapter Ten. 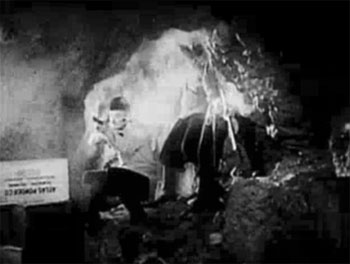 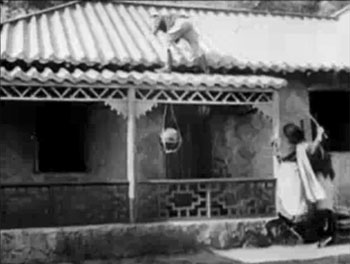 Above: The motorcycle chase (top left), the Dragon’s henchmen in the cave shootout (top right), King and Beery during the hillside shootout (bottom left) and the rooftop escape from the monastery (bottom right).

The serial’s cliffhanger sequences are similarly varied; there are several plane crashes (most of which our hero rather improbably lives through, in typical Universal fashion), but also many more distinctive chapter endings, including King and Beery’s near-stoning by a Mongolian street mob at the end of Chapter Eleven (the resolution of this peril is unusually clever), King’s Chapter Ten plunge from a cliff, Jackie Morrow’s apparent annihilation by a sand-blasting hose at the end of Chapter Five, and a moving monastery wall that advances to crush King at the conclusion of Chapter Three. The bombing of King and C. Montague Shaw’s car by a Dragon plane after a chase scene in Chapter Four is also memorable, although, as in the plane-crash resolutions, both protagonists simply crawl out of the rubble at the beginning of the next chapter.

Drummond’s locations, both interior and exterior, serve as very picturesque backdrops for the action. The Bronson Canyon area furnishes some of the rocky hillsides surrounding the Dragon’s hideout, as well as the winding mountain roads that provide a setting for the many car chases. Universal’s outdoor rock set is also put to good use, while the airport seen in The Phantom of the Air and Tailspin Tommy, placed as it is in the middle of a semi-desert section of California, works well as the pioneering outpost of International Airways. The tunnels of the “Hall of Dead Kings” are impressively furnished with Oriental images and other appropriate trappings, as is the spacious Buddhist monastery. The winding city streets surrounding the monastery are quite convincing as well, and inhabited by plenty of extras; Universal’s higher production values are of great help here in creating the illusion of an Oriental city. 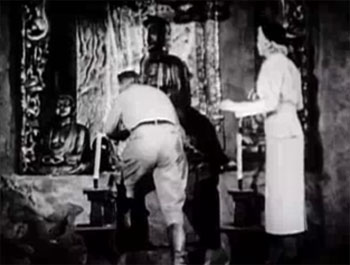 Above left: John King, Noah Beery Jr., and Guy Bates Post in the monastery courtyard, with a procession in the background. Above right: C. Montague Shaw and Jean Rogers escape through a secret passage in the Hall of Dead Kings.

Drummond’s cast is solid from top to bottom. John King makes an excellent leading man, and is quite convincing as a seasoned, cool-headed daredevil; his somewhat youthful appearance is counterbalanced by his suave, extremely self-assured manner and a deep, commanding voice. His singing voice, displayed about half-a-dozen times during the serial in multiple renditions of a catchy ditty called “Give Me a Ship and a Song” is also very good, strong but not operatically incomprehensible; although these musical interludes may be a bit repetitious, they’re pleasant to listen to and brief enough to keep from slowing down the serial’s pace.

Heroine Jean Rogers is dazzlingly beautiful, lighting up the screen each time she appears; she also gives a real air of intelligence and thoughtfulness to both her dialogue delivery and her facial expressions which would make it hard to overlook her even were she less stunning. Noah Beery Jr. is ideal as Arkansan mechanic Jerry; like Beery’s Skeeter in the Tailspin Tommy serials, the character is gabby, genial, accident-prone, and rustic, but not stupid. Beery is not only allowed to skillfully provide laughs (as in the scene where he’s saddled with a Chinese baby) but also permitted to perform some impressive heroics (as in the final chapter). 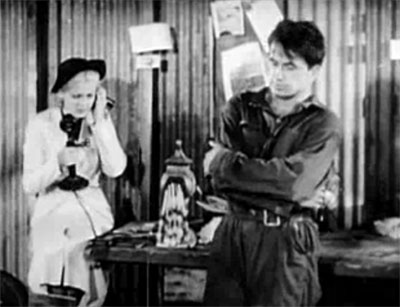 Jackie Morrow’s noticeably urban accent is a little disconcerting at first, but the young actor quickly proves a likable and very unaffected “kid tagalong;” it helps that his character is as savvy as any of the adults, and never precipitates trouble through impulsive actions. C. Montague Shaw is unflappably dignified as the beleaguered Dr. Trainor, and Selmer Jackson is briskly authoritative but likably good-natured as Morrow’s father.

The stage-trained Guy Bates Post is very good as the High Lama; although his character’s extreme saintliness and sententiousness are a bit hard to take at times, Post achieves such a convincing combination of serenity and gentle dignity that the Lama is made much less insufferable than he would have been in the hands of a more pompous actor. Arthur Loft does a remarkable job of playing against type as the Lama’s scholarly aide Chang Ho, dropping his usual raspy tones in favor of a calm, cultured-sounding voice.

Chester Gan, a Chinese San Franciscan, sounds a little odd when raving about “foreign devil birds” in his very American voice, but is otherwise fine as the Lama’s other aide, the irritable and voluble Kai-Chek. James B. Leong is properly sinister as the mysterious Henry Kee, although his struggles with his strong Chinese accent give him some trouble in delivering dialogue; it would probably have been a better idea to cast Gan as the Westernized Kee and utilize the more exotic Leong as the resolutely anti-Western Kai-Chek.

James Eagles, as the shifty Johnny Wong, is the quirkiest of the suspects, providing humor as well as potential menace with his deadpan prevarications. Robert Warwick is pompous and blustery as the most overbearing board member of International Airways, while Hooper Atchley (like Warwick, a veteran of Mascot serials) and Sam Ash are more subdued as his colleagues. The curt, accented Fredrik Vogeding and the sly, drawling Al Bridge round out the unprecedentedly large list of Dragon suspects.

The Dragon himself, unlike most Mascot villains, does not become a visual presence until the last few chapters, but his booming, arrogant voice–suddenly and startlingly broadcast to followers and opponents through prayer wheels, electric fans, and other spinning devices–helps greatly to give him a strong aura of menace. His lead henchman is Lon Chaney Jr., who has limited screen time but makes the most of it–chortling or snarling his lines and aggressively ordering around his three chief subordinates–Edmund Cobb, Dick Wessel, and Stanley Blystone. All three are suitably thuggish and nasty, although it’s a little hard to buy any of them–or Chaney, for that matter–as the Russians they’re supposed to be.

Eddie Parker, Tom Steele, and fellow stuntman George DeNormand all pop up in multiple bits as pilots, henchmen, and the like, while Louis Vincenot plays a more notable Dragon agent who’s killed off early on. House Peters Jr. and Russell Wade (both of whom would go on to bigger parts–Peters in Republic and Columbia’s post-war B-westerns and serials, Wade in RKO’s 1940s B-films) appear as pilots of an endangered plane; one of their passengers is radio actor and later sitcom stalwart Gale Gordon, while another is former Mascot regular Edward Peil. Attractive Diana Gibson, supporting heroine in Universal’s earlier serial The Phantom Rider, is the plane’s stewardess.

Despite its frequent “live-through-it” cliffhanger resolutions (common to all Universal serials) and the occasional obfuscation surrounding its mystery villain (inherited from its Mascot forbears), Ace Drummond is a very successful serial, a high-quality Mascot-Universal hybrid that features both studios’ standard weaknesses but also effectively combines their many strengths.

Above: John King delivers a final chorus of “Give Me a Ship and a Song” for Jean Rogers and Jackie Morrow in the serial’s last scene.