Burn-’em-up Barnes (Jack Mulhall) is a typical Depression-era factory worker as his serial adventures begin; we meet him and his friend George Riley (James Bush) watching an auto race through a board fence in 1929. However, his fascination with race cars (hence his nickname) and his daredevil nature help him to rise to greater things as the years go by, and by 1934 (around the four-minute mark of the first chapter) he’s a famous racing car driver and the unofficial “King of the Dirt Tracks.” However, tragedy strikes when Barnes helps George, now a successful newsreel cameraman, and George’s kid brother Bobby (Frankie Darro) gain access to a prime filming spot beside a sharp curve on the race track. During the race, the car of one of Barnes’ competitors crashes through the track railing and barrels into the cameramen. Bobby survives, but George is fatally injured, making Barnes decide to give up racing.

Determined to provide for Bobby, Barnes searches for a new career and soon goes into partnership with Marjorie Temple (Lola Lane), proprietress of Temple Transportation Company. Unbeknownst to Barnes, wealthy auto manufacturer Lyman Warren (Edwin Maxwell) and his accomplice, race track owner Drummond (Jason Robards Sr.), are out to sabotage Marjorie’s business, so that she will have to sell them her late father’s land (supposedly worthless but actually rich in oil) in order to keep her company afloat. It will take Barnes’ racing experience, Bobby’s photography skills–and both heroes’ cheerful indefatigability–to defeat Warren’s schemes. 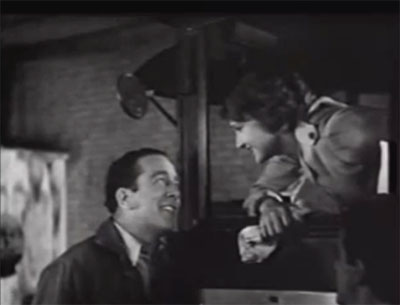 Above: Barnes, Marjorie, and Bobby (back to camera) polish up one of the Temple Transportation Company’s school buses, as the irrepressible Barnes forecasts great things for the outfit.

Barnes’ protagonists so vivid that we enjoy following their adventures as much for the sake of the characters themselves as for the stunts they perform. The lengthy prologue that introduces us to Barnes and Bobby is not just padding; it makes us much more interested in seeing our heroes succeed. The understressed but obvious romance that develops between Barnes and Margie Temple also adds interest to the story, while not slowing it down in the slightest.

Barnes’ action scenes take place against an atmospheric backdrop of garages, racetracks, office buildings, city streets, and rural dirt-roads–most of them real locations which give some fascinating glimpses of Los Angeles and its environs in the 1930s. Some of the standout action scenes include the car-motorcycle chase at the end of Chapter Two, with Barnes on the cycle taking a short-cut across a rolling range of hills, and the chase/fight sequence at Drummond’s racetrack in Chapter Three, which climaxes with Barnes slugging it out with a group of henchmen on top of the track’s grandstand. Among other noteworthy sequences are the fight at the Temple garage and the chase in the garage’s overhead catwalk in Chapter Seven, the car-bus chase in the same chapter, the fight in Warren’s office in Chapter Eleven and the subsequent chase across Warren’s skyscraper roof-top.

Above: Barnes clears a hilltop on his motorcycle (top left) and climbs the racetrack grandstand (top right). At bottom left, Marjorie and Bobby’s car is chased by Warren’s henchmen, while, at bottom right, an out-of-control truck with Barnes at the wheel careens down a steep grade.

These scenes, and many additional ones, are well-directed by directors Armand Schaefer and Colbert Clark, with valuable assistance from the serial’s lead stuntman, Yakima Canutt. Barnes’ cliffhanger sequences, as you would expect from the subject matter, largely center around motor crashes of some sort, although there are so many different vehicles involved in these scenes–race cars, buses, trucks, motorcycles, ordinary cars–that the chapter endings rarely seem repetitive. Two of the most memorable endings comes at the conclusion of Chapter One, when “Burn-’em-up” apparently burns up in a racecar accident, and at the end of Chapter Ten, when Barnes finds himself trapped in a sabotaged truck on a treacherous downhill grade.

Jack Mulhall is wonderfully exuberant as Barnes, rushing around earnestly and almost breathlessly in the action scenes, genially shrugging off his many close calls, and continually breaking into hearty laughter in lighter moments. Frankie Darro is equally likable as Bobby Riley, who functions as the serial’s virtual co-hero; he manages to convey youthful self-confidence and enthusiasm without ever seeming cocky or overly impulsive.

Above: Frankie Darro and his trusty newsreel camera.

Lola Lane is an appealing heroine–properly concerned over her business woes and Barnes’ continual perils, but never too grave to smile (which she does most charmingly) or to engage in good-humored banter with Frankie Darro and Julian Rivero’s comic Italian mechanic Tony. Rivero is enjoyably excitable and talkative, and his fractured English is very amusing (“You betcha my life!”). Admittedly, his occasional solo comic routines aren’t particularly funny–but they aren’t painful, either.

The portly, British-accented Edwin Maxwell makes a wonderful brains heavy, delightfully slick and unctuous when feigning sympathy with the good guys and equally fun to watch when coolly plotting with his underlings. Jason Robards Sr., as secondary villain Drummond, makes an excellent foil for Maxwell; his slow, sneering drawl and his sarcastic insolence towards the good guys contrast perfectly with Maxwell’s slickness and mellifluous voice.

Maxwell and Robards’ henchmen are a mean but colorful lot: swaggering but shifty Francis McDonald, hulking and harsh-voiced Stanley Blystone, snarling Al Bridge, gap-toothed Bob Kortman, and intensely hammy Edward Hearn. John Davidson, as sinister as ever, has a few good scenes as a villainous race-car driver named Chase (another henchman of Maxwell and Robards) but is unfortunately killed off in Chapter Two. James Burtis has an amusing guest appearance as a film-making friend of Barnes, Tom London appears in the later chapters as a co-conspirator of Maxwell’s, Billy Bletcher pops up as a race track announcer, and Dickie Jones is a passenger on one of the Temple Transportation Company’s school buses. James Bush is good in his short-lived role as George Riley, cheerfully kidding around with Mulhall before his death scene–which is acted very movingly by Bush, Mulhall, and Frankie Darro.

Burn ’em up Barnes is one of the few Mascot serials I can recommend unreservedly; it not only ranks as one of that studio’s best, but can stand proudly alongside later, bigger-budgeted classics from Universal and Republic. Like its never-say-die hero, it manages to accomplish great things despite its humble means. 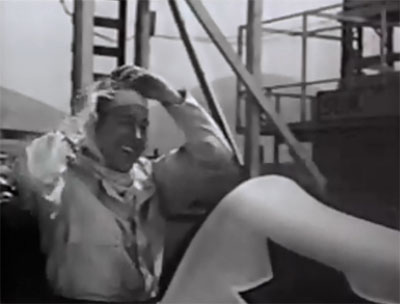 Above: Jack Mulhall at the racetrack.