Who’s Guilty sounds like great fun in theory, with its use of stock characters and plot devices often seen in whodunit features but seldom featured in serials. Unfortunately, Guilty hardly makes inspired or interesting use of its offbeat “Old Dark House” theme–being too leadenly paced, cheaply produced, and poorly written to impress as an atmospheric and puzzling mystery. It recalls nothing so much as a severely elongated version of one of the dull, static, and too obviously low-budgeted mystery/comedy B-films that its producer Sam Katzman turned out for Monogram during the early 1940s before moving his production setup to Columbia. These echoes of Monogram were all too common in Katzman’s first few years as Columbia’s serial producer; they also resound loudly (and irritatingly) in Brenda Starr, Reporter and Chick Carter, Detective. 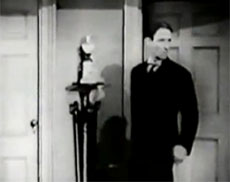 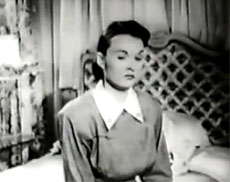 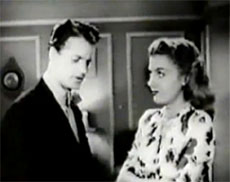 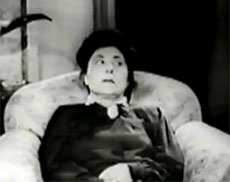 Above: The suspects–whodunit archetypes one and all–as featured in the overview at the beginning of each chapter: left to right (top row) are the Eccentric Housekeeper (Minerva Urecal), the Sinister Butler (Charles Middleton), and the Urbane But Untrustworthy Lawyer (Sam Flint). Left to right (bottom row), we have the Mystery Woman (Amelita Ward), the Spendthrift Nephew (Bruce Donovan) with his Glamorous Wife (Jayne Hazard), and the Overbearing Dowager (Belle Mitchell).

Writers George Plympton and Ande Lamb try to make amends for a thin and predictable plot by piling on pointless mystifications, a device utilized in many an hour-long B-mystery, at Monogram and elsewhere–and one that proves completely ineffectual in a five-hour serial. The “mystery’s” ultimate solution becomes obvious in the first chapter, which makes all the subsequent obfuscation so transparent that it quickly gets irksome; to make matters worse, the killer’s motives are never really explained, and the motivations of the characters who withhold information from the hero are flimsy at best. The weakness of the mystery element isn’t the thing that sinks Who’s Guilty, however; many Mascot serials managed to be entertaining with even weaker plotlines. The real damage to the serial is done by its tedious pacing; in order to fill the aforementioned five hours, characters waste far too much time in conversations that lead nowhere, variously plotting their moves, pondering over suspicious incidents, or vehemently but pointlessly bickering with each other. The dialogue in these scenes is so mediocrely written and (in some cases) so poorly delivered that it’s not even interesting, unlike similarly oversized portions of talk in Universal’s serials from the same era.

As in most other Katzman serials, the directors (B-western veteran Howard Bretherton and Republic-serial alumnus Wallace Grissell) take care to supplement verbal padding with physical padding, from protracted scenes of people walking or driving to a needless dance number in a Mexican cantina. The serial’s plodding pace is quickened on occasion by a handful of reasonably well-handled fight scenes, but most of these sequences are not only scarce but very brief. The Chapter Twelve warehouse fight is perhaps the most interesting–partly because of the energy that villain Terry Frost and Robert Kent’s stunt double (probably either George DeNormand or Eddie Parker) put into it, and partly because of the impressively (and amusingly) careful way in which the brawlers avoid knocking over the barrels and crates that fill the warehouse (the economical Katzman obviously didn’t want to risk damaging any props). The hillside shootout/chase in Chapter Four is also fairly exciting, while the attempted rescue of a hostage at another shack in Chapters Thirteen and Fourteen would have worked well enough, had it not been marred by an extremely weak cliffhanger sequence that breaks up the flow of the action (obnoxious sidekick Tim Ryan stumbles into a room full of steam pipes).

Above left: Robert Kent races for cover during the Chapter Four shootout. Above right: Terry Frost looks like he’s taking a prop-toppling fall during the Chapter Twelve warehouse fistfight, but will nimbly manage to twist away from those stacked oil barrels.

Most of Guilty’s other cliffhanger sequences are not much better than the steam-pipe one; most of them are not only unspectacular (the hero is shot by a desk gun, the heroine is grabbed from behind by the villainous butler) but also suffer badly from a complete lack of suspenseful buildup.  The elaborate Chapter Six ending–in which a bound Tim Ryan and Amelita Ward are dropped into an apparently boiling lake by a platform that’s released when a suspension rope is burned through–is at least memorably novel, but is resolved in absolutely ridiculous fashion; the pair walk out of the lake almost immediately because, it seems, the water was cold instead of hot and instantly loosened their bonds.

Above: Shots from the Chapter Six cliffhanger sequence.

The serial’s exterior and interior mansion sets, including a mammoth front porch seen in many of Columbia’s features, are good ones, but they dominate the action so much that they start to wear out their visual welcome; other interiors, like the hero’s office or some of the “apartments” visited during the chapterplay, are far more chintzy-looking than the mansion’s halls and rooms. The serial’s many indoor visuals are varied at intervals by outdoor sequences shot at Corriganville, most of them taking place during the good guys’ extended trip to Mexico in the earlier chapters. These “Mexican” sequences provide welcome relief from indoor antics at the mansion and elsewhere, but the Mexican sojourn itself is so carelessly linked to the main “plot” that its function as padding becomes painfully obvious. 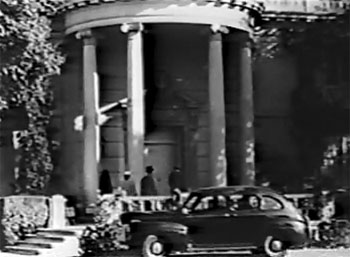 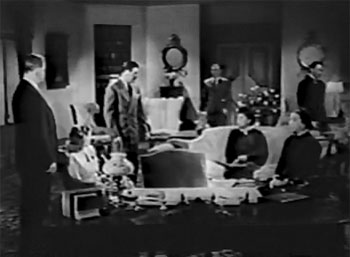 Above: A long shot of the Calvert mansion front, and an interior shot of one its oft-seen interiors (filled with investigators and suspects).

The serial’s cast is a very mixed bag; some of the players manage to bring energy to their poorly-defined roles, while some make no effort to perform at all and others actively damage the serial. Robert Kent is quite good in the lead, giving an unusually tough and hard-boiled air to his character while still remaining likable; it’s easy to sympathize with his gruffness, since we in the audience share his frustration with the serial’s roundabout plot.

Amelita Ward, on the other hand, is one of the most unsympathetic heroines in any serial; much of this is the fault of the script, which keeps her motivations in the dark until the final scene and has her character not only keep refusing to assist the hero’s investigations, but also keeps her snapping at him angrily even after he’s saved her life multiple times. She certainly doesn’t make any effort to take the edge off this scripted nastiness, however; she goes through the serial with an almost perpetual scowl.

Sidekick Tim Ryan is even more irritating than Ward, however; his presence positively stinks up the serial, by providing it with the same extensive and unfunny “comic relief” that marked far too many Monogram features (in many of which Ryan appeared). His cocky swagger, clumsy pratfalls, and dialogue delivery (alternately smirking and blustering) have us longing for his character to be murdered by the third chapter; the insistently “funny” music that accompanies his antics doesn’t help his case. His performance is even more annoying than the “comic” turns by the likes of Lee Ford (SOS Coast Guard) and Sonny Ray (Perils of Pauline); Ryan looks much more normal and intelligent than these earlier serial buffoons, and his antics thus come off as deliberately offensive rather than merely mindlessly stupid (picture Pat O’Brien behaving like a cross between Milton Berle and Huntz Hall, and you have an idea of the impression Ryan creates). 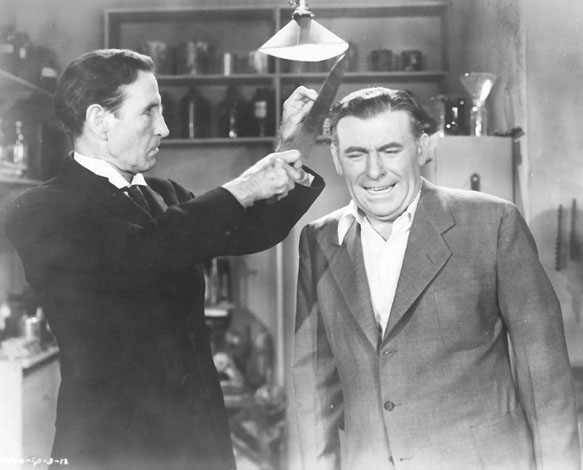 Above: Charles Middleton’s Patton literally splits hairs, to show Tim Ryan’s mugging Duke the sharpness of his knife in a publicity still (just cut a little deeper, Mr. Patton, and you’ll save us all a lot of annoyance).

Charles Middleton has relatively little to do as the sinister butler Patton, but his performance is one of the brighter spots in the serial; whether he’s ominously sharpening knives or hypocritically affecting a respectful “servant” pose, he gives his hoary melodrama character (the butler who did it) the right combination of menace and subtle humor. Veteran character actress Minerva Urecal is also entertaining as the daffy housekeeper Mrs. Dill, who’s convinced she’s in contact with the spirit world; though she has even less screen time than Middleton does, she makes the most of it, dropping the no-nonsense grumpiness she used in most of her other roles in favor of a ghostly manner that seems to be a deliberate imitation of Gale Sondergaard’s many “creepy housekeeper” characterizations in various Old Dark House movies.

Sam Flint, as the shady lawyer Horace Black, seems to be delighted with the opportunity to cast off his usual upright serial persona; his slick, unctuous delivery and his sly facial expressions are very entertaining. Belle Mitchell is similarly lively as grande dame Mrs. Caldwell, but is saddled with some embarrassingly flat attempts at witty lines; she also overdoes her character’s “high society” accent to a comical extent. Bruce Donovan as Curt Bennett is bland and underenergized, and often seems to be sleepwalking through his part. Jayne Hazard as his wife is only a little more energetic, but her pulchritude is so strong that she’s a lot easier to watch than her screen husband. Davison Clark is on the periphery for most of the serial, but is colorfully cranky in his dual role as the Calvert brothers; Milt Kibbee plays a Calvert relation killed off in the first chapter. 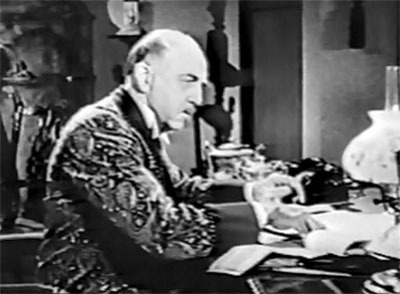 Above: Davison Clark as Henry Calvert.

Wheeler Oakman pops up in the middle chapters as a gangster named Smiley, who’s owed money by the Curt Bennett character and insinuates himself into the main action; his delightfully swaggering manner peps up several scenes, but he’s killed off much too soon. Richard Cramer, Oakman’s fellow 1930s badman, plays another heavy during the Mexican sequence, and, like Oakman, enlivens the proceedings a little before dropping out. A characteristically forceful Terry Frost figures prominently in the serial’s last third as yet another “guest star” crook by the name of Edwards. I couldn’t identify the stocky actor playing Burk, the crooked mine foreman in the Mexican scenes–but he’s definitely not Charles King, despite a credit in Les Adams’ index of King’s roles on the Old Corral. “Burk’s” cohorts and Richard Cramer’s attractive but amateurish-sounding female accomplice are also unfamiliar to me–I’d guess them to be players who worked with Katzman over at Monogram.

John Merton has a brief bit as a policeman, while Jack Ingram has a much more extended part as Kent’s police-sergeant aide. Robert Tafur plays a Mexican police officer who aids Robert Kent during the latter’s detour to Mexico, and is the recipient of comically fawning Good-Neighbor-Policy-inspired praise from both the hero and narrator Knox Manning (who pointedly reminds us that Kent is receiving “the efficient aid of the Mexican police”). Nacho Galindo is one of Tafur’s men, while Eddie Parker is a thug working with Richard Cramer.

Who’s Guilty, with its noxious Monogram-style comedy relief and its elementary Monogram-style mystery plot stretched out to pointless and painful lengths, is a prime example of the dire results of Sam Katzman’s attempts to crossbreed the Columbia movie serial and the Monogram B-mystery feature; neither the better members of its cast (Kent, Middleton, Flint, Urecal) nor the competent action-scene direction by Bretherton and Grissell manage to make it more than fleetingly entertaining. Instead of a “baffling mystery crowded with intrigue,” it ultimately proves to be a tedious non-mystery crowded with tiresomeness.