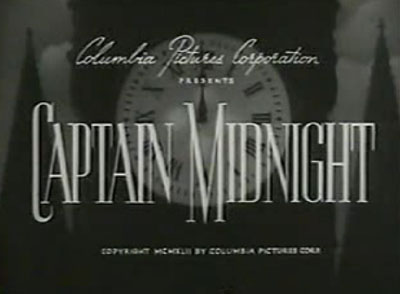 Captain Midnight, like The Green Archer and many other early-1940s Columbia serials, is weakly and repetitively plotted, but is given a strong dose of energy by director James W. Horne’s humorous insertions. The serial’s script (by Basil Dickey, George Plympton, Jack Stanley, and Wyndham Gittens) is decidedly undernourished in more than one area, failing to state why Ivan Shark is bent on destroying American defenses; there’s never even an allusion to his hazy “foreign backers,” as there was in many serials made before or after World War Two. Captain Midnight was actually released after Pearl Harbor, so its refusal to refer to an overseas enemy–even an undefined one–is truly perplexing. Had slightly more exotic performers played Shark or his daughter, perhaps such explanations would have been unnecessary, but nothing about James Craven or the all-American Luana Walters cries out “Axis agent!” The fact that Shark possesses a Chinese lieutenant and dresses as an Indian rajah (attended by gigantic black guardsmen) while interrogating prisoners serves to further cloud the issue of his origins and goals. 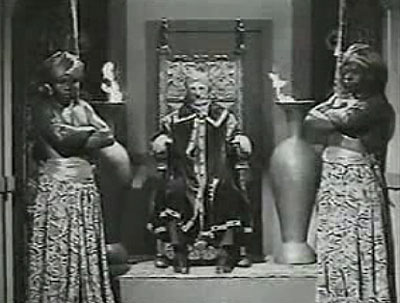 Above: A masked James Craven dresses up in bizarre fashion to confront the offscreen Bryant Washburn.

Captain Midnight’s “secret identity” is poorly handled as well; not only does there seem no reason for Albright to dress up as Midnight (since both are enemies of Shark), but the double-identity idea is abandoned without much fanfare part-way through the serial, by which time most of the cast members have tumbled to the secret. The very popular radio show version of Captain Midnight did not include a double-identity gimmick at all, again leaving one to ponder the writers’ thought processes here. 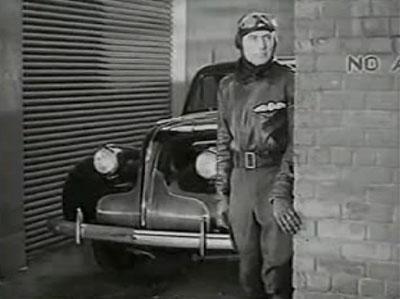 Above: Dave O’Brien in his Captain Midnight outfit, minus the mask.

The writers also fail to balance Shark’s pursuit of Edwards and his Range Finder with any other plot threads for most of the serial; Shark’s bomber planes, given such prominence in the opening chapter, only pop up occasionally for the rest of the serial, and are usually only called into action to stop Captain Midnight from interfering with the Range Finder plot. As a result, Shark’s continual captures of Edwards and his daughter and Midnight’s rescues of same begin to make the serial feel like an extended game of Ring-a-Levio after a while; there are many chapterplays with similarly repetitive plotlines, but they manage to disguise it by giving the villain supplementary goals or featuring memorable cliffhangers or action scenes–which Midnight’s script does not. The action does get a bit of a boost from some good locations, including the Columbia Western town seen in many of the studio’s later A-films, and Shark’s sprawling mansion hideout. By and large, however, it’s left to James W. Horne to enliven the serial’s tiresomely circular proceedings.

Horne is not given a screenplay credit as he was in Green Archer, but his hand is evident in many funny and self-parodying pieces of dialogue–Ivan Shark’s shriek of “This is just a little bit complicated!” when Edwards is explaining the Range Finder, Major Steele’s (Joseph Girard) solemn wish that the Constitution prohibited him from giving a captive Shark a drink of water, or a motorcycle patrolman’s blase rejoinder of “that’s a new one” when an escaping Edwards tells him he was speeding to protect his invention from a spy ring. Other humorous touches include another cop growling “so what?” when our hero announces “I’m Captain Midnight,” Shark’s various dialogue interchanges with Fury (in which they seem more like television’s My Little Margie and her father than a team of villains), and the jittery attempts of Shark’s henchmen to conceal their failures from their hysterically cranky boss (including one thug’s radio-announcer imitation as he dramatically narrates a fictitious account of an encounter with Captain Midnight).

The serial’s fight scenes and cliffhanger sequences also feature plenty of obvious parody; the fights are wild and sloppy brawls in which our hero pummels (on average) five villains at once, sometimes unrealistically vanquishing them all and sometimes getting comically pounded into unconsciousness. The chapter endings, particularly those involving deathtraps, tend to be cartoonishly overdone–the standout being the Chapter Ten ending, which has Midnight trapped on a spinning platform that threatens to shake him off into a pit of fire beneath him; as if this peril wouldn’t be enough, he’s simultaneously threatened by a gigantic millstone slowly descending on the platform to squash him. Even several of the more standard cliffhangers that don’t involve such convoluted contraptions are resolved so as to defy credibility, particularly Captain Midnight’s survival after being trapped in an explosion and then buried under crushing roof beams; he simply crawls out from the rubble none the worse for wear.

Above: Midnight trapped in Shark’s overdone death trap at the end of Chapter Ten.

Thanks to Horne’s emphasis on comedy, James Craven comes off as the chapterplay’s real star, since his machinations provide the impetus for the serial’s nonsensical action. Craven actually has more screen time than ostensible leading man Dave O’Brien and spends most of it going outrageously “over the top”–screaming at his henchmen when things go wrong, gloating childishly over his own cleverness, and bellowing aggressively at his enemies, undoubtedly with the blessing of director Horne. Craven’s Shark is not menacing in the least, but he manages to be very entertaining throughout.

Dave O’Brien looks the part of a serial hero to perfection, but plays his role in a highly caricatured fashion, snapping out his lines at an aggressive and machine-gun-like pace and tackling dangerous situations with such outrageously smug self-confidence that he frequently seems idiotic rather than heroic. His real-life wife Dorothy Short also comes across as a caricature of a standard serial heroine, delivering her dialogue with shrill breathlesness when she’s not screaming at the top of her lungs in the face of often negligible danger. The gorgeous Luana Walters is cast against type as Fury Shark, and while she delivers a lot of her dialogue in harshly nasty fashion, she never seems truly villainous; she even seems rather lovable in her bemused, eye-rolling interchanges with the eccentric James Craven.

Above: Luana Walters and James Craven.

Sam Edwards and Guy Wilkerson do sterling work as Midnight’s comic sidekicks, ironically coming off as the most normal characters in the serial. The youthful Edwards, later a familiar face on many 1960s TV shows, is likably exuberant and energetic, while the drawling Wilkerson makes his character seem very shrewd in a folksy way, as well as unflappably easy-going; the contrasting reactions of the two characters (one excitable, one laid-back) to various calamities furnishes several laughs.

Ray Teal, who would go on to a notable character-acting career in feature films and television in the fifties and sixties, has his biggest serial role here as Shark’s chief henchman, playing the part in much the same nervous, grumbling, and flustered fashion that Jack Ingram did in other Horne serials. Al Ferguson, Charles Sullivan, Ted Mapes, Charles Sherlock, and Chuck Hamilton are all on hand as supporting henchmen, reacting in wild panic to sudden appearances by the hero and dealing with their boss in almost the same terrified fashion. Edward Peil, in ineffective makeup, plays Shark’s Chinese headquarters aide Fang; his unconvincing appearance and equally unconvincing sing-song intonation merely adds to the serial’s comic tone.

Above: Four of Craven’s thugs react sheepishly to a bawling-out: left to right are Charles Sullivan, Charles Sherlock, Ted Mapes, and Chuck Hamilton.

Bryant Washburn spends the earlier part of the serial hamming outrageously, particularly when being threatened by Shark. His character is injured and contracts amnesia about a third of the way through, leaving him less to do but still giving him some overacting opportunities when his character launches into paranoid whining about how “everybody,” including the hero, is after his invention. Joseph Girard is dignified but also pompous and slightly doddering as Midnight’s superior Major Steele, while George Pembroke delivers one of the most understated performances in the serial as a helpful doctor.

Captain Midnight, though sprinkled with a few serious moments (particularly the rather suspenseful concluding chapter), could easily be classed as a full-fledged comedy; considered as such, it’s often highly amusing–though definitely a letdown for fans of its radio source, and for anyone who’s looking for standard serial thrills and chills.