Radar Men from the Moon pits government research scientist “Commando” Cody (George Wallace) against a gang of saboteurs bent on softening Earth’s defenses in preparation for an invasion from the Moon. With the help of his aides Joan and Ted (Aline Towne and William Bakewell), Cody battles both the Earthbound lunar agents and their master, the extraterrestrial ruler Retik (Roy Barcroft)–which entails more than one visit to the Moon via rocketship. On Moon and Earth alike, Cody also makes frequent use of his rocket-powered “flying suit” to interfere with the Moon Men’s evil schemes.

Radar Men from the Moon enjoys more of a cachet among serial fans than many other late Republic serials do, principally because of its fantastic science-fiction elements. However, while its rocketships, rocket suits, and Moon Men give it more of a fantastic edge than serials like Don Daredevil Rides Again and Government Agents vs. Phantom Legion, the serial’s action plays out in the same matter-of-fact manner that its 1950s Republic contemporaries do, making it a brisk, enjoyable, but decidedly unspectacular serial. That said, the serial’s science-fiction sets and props–some original, some recycled from earlier releases–are quite good, all the more impressive given the limited budget. Cody’s rocketship is a sleek and convincing-looking craft, despite its unscientific airplane-like landings and takeoffs. The “moon tanks” that figure in several chapters are also fun to watch, in basic structure reminiscent of the “Juggernaut” from Republic’s early serial Undersea Kingdom. The laboratories of Cody and Retik are well-appointed, and the streets and halls of the Moon Men’s city are appropriately alien-looking, although all master shots of the city are cribbed from another early Republic serial, Darkest Africa. And, of course, the flying suit is as impressive in action as it was in King of the Rocket Men (from which many of the shots of the flying hero are cribbed); Republic’s dummy-on-wires “rocketman” effect has never been equaled in simplicity and believability, even in this age of CGI. 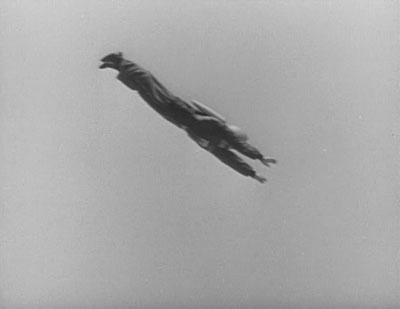 Above: No process screen work here as Cody flies for Earth.

Above: Cody, in Moon Man garb, in a lunar hallway.

Radar Men–like all of Republic’s latter-day serials–is scripted by Ronald Davidson, in uncomplicated and fast-moving fashion. His screenplay seamlessly works in numerous pieces of stock footage from earlier Republic entries; among the contributing serials are The Crimson Ghost, King of the Rocket Men, The Purple Monster Strikes, and SOS Coast Guard. The narrative mixes forays to the Moon–unique in Republic’s serial canon–with more familiar Earth-bound skirmishing; it would have been a nice change-of-pace had the entire serial taken place in outer space, particularly since the Vasquez Rocks locations used for the lunar surface are so striking. Having Cody working to thwart the lunar invaders on their own planet would also have removed the silliest aspect of Davidson’s script–the idea of Moon Men financing their planned invasion of the earth by having Earthling thugs commit bank robberies and the like. However,  setting the whole serial on the moon would have entailed more extensive location work and forced the construction of additional sets, both prohibitively expensive for Republic in the 1950s.

Above: Cody battles a Moon Man on a rocky lunar slope.

Both lunar and earthly sequences have some enjoyable action scenes. A chase on the moon using the aforementioned tanks is one of the highlights, as is a battle between an airplane and a raygun-equipped truck. The fight sequences aren’t as dynamic as in earlier Republic serials, but there are many respectable setpieces among them, particularly the tussle in Cody’s rocketship when a Moon Man prisoner escapes, the first-chapter fistfight in Retik’s laboratory, and a fight between heroes and villains in a cafe (which is, refreshingly and amazingly, ended by the cafe’s shotgun-wielding owner; in most serials such characters do little but cower in the background). The serial’s principal stuntmen are Tom Steele (who doubles hero George Wallace) and Dale Van Sickel, but the presence of Dave Sharpe, Carey Loftin, and Ken Terrell can be discerned in several fights; Steele and Van Sickel also make appearances as Moon Men. The larger-scaled cliffhanger scenes–like the melting mountain–largely consist of borrowed footage from earlier serials, while the more low-key, newly-filmed chapter endings are frequently interesting in their own right–the chapter ending in which the airhose of Cody’s space helmet is disconnected during a moon-tank battle being the best example.

Above: The Moon tank in a nighttime chase sequence.

Radar Men’s cast matches the serial’s overall air of down-to-earth but likable professionalism. The gruff and stocky George Wallace, cast against type as a scientist-hero, does a fine job in the role, barking out orders and confronting villains with square-jawed conviction. Although the origins of Cody’s moniker “Commando” are not explained, Wallace’s confident, parade-ground manner make it easy to picture this hero as a man with a military background. [1] Aline Towne makes a good leading lady, calm and businesslike but also engagingly energetic at times. William Bakewell, a former leading man who was typically cast as unpleasant and stuffy types in 1950s films, is earnest and likable, showing more personality than many of Republic’s other serial back-up heroes.

Above: George Wallace confronts Roy Barcroft (back to camera).

Clayton Moore, as the Moon Men’s Earthling accomplice Graber, is suitably sneering, smug, and nasty in the last heavy role of his screen career. Tough-looking Bob Stephenson, a perennial background Nazi in World War Two films, has one of his biggest screen roles as Moore’s partner Daly. Prolific television character actor Peter Brocco is excellent as the harsh, rather reptilian Moon Man Krog, who relays the orders of the lunar ruler Retik to Daly and Graber. As Retik, Roy Barcroft tackles his most colorful role since the Purple Monster, and although his screen time is not extensive, he’s definitely the most lively performer in the serial, whether he’s gloating over the Moon’s superior weaponry, imperiously issuing orders to Brocco, or growling reprimands at his followers for their failures. 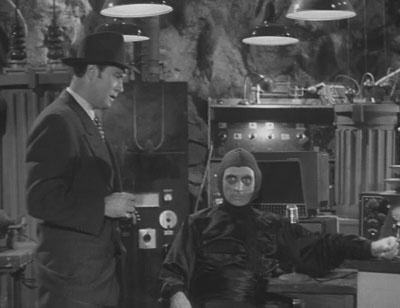 Above: Clayton Moore confers with a morose-looking Peter Brocco.

Noel Cravat, one of the principal henchmen in G-Men vs. the Black Dragon, has a small role here as one of Barcroft’s aides. Wilson Wood is pleasant as the laid-back pilot of Cody’s rocketship, and Ted Thorpe plays the already-mentioned heroic cafe proprietor. The weirdest of the minor cast members is Don Walters as Henderson, the government agent who gives Cody his orders. Usually such characters are played by stout, deep-voiced, and respectable-looking performers, but Walters is a tall, thin, and decidedly sinister actor, with a polished near-British inflection and a rather evil smile; he bears a startling resemblance to Christopher Lee and is an odd change from the more reassuring government men in other serials.

Smoothly directed by Fred C. Brannon and smoothly shot by John MacBurnie, Radar Men is a streamlined and effective latter-day cliffhanger, lacking in flourishes but providing painless entertainment. However, science-fiction fans who are expecting something along the lines of Flash Gordon, Destination Moon, or even Star Trek should be forewarned that Radar Men is more akin to its less fantastic Republic contemporaries than it is to the wider world of science fiction. However, for those who enjoy the late Republics, it’s a typical example of the era’s serials, with some additional and welcome dashes of interplanetary color.

Above: One of a series of nifty montage shots tracing Cody’s flight to the Moon.

[1] The name, of course, was actually an attempt on Republic’s part to evoke “Commander Corry,” the hero of an early and popular science-fiction series called Space Patrol.

4 thoughts on “Radar Men from the Moon”