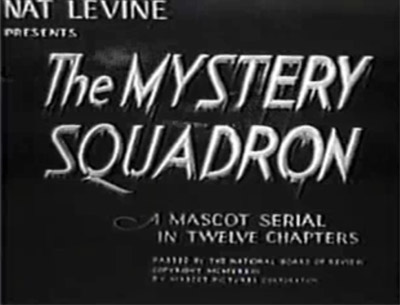 The Mystery Squadron begins at an airplane show, as ace flyers Fred Cromwell (Bob Steele) and Bill “Jelly Bean” Cook (Guinn “Big Boy” Williams) perform feats of aerial derring-do. After the show, Cromwell and his pal Bill “Jelly Bean” Cook are approached by their former fellow-ace Henry Davis (Jack Mulhall), who has a dangerous job to offer Cromwell and Cook. It seems that Davis is working as foreman for Stephen Gray (Lafe McKee), a contractor whose dam construction project is being threatened by a mysterious squadron’s air raids on the dam site. The leader of this Mystery Squadron is a pilot who calls himself the Black Ace, and whose identity is unknown to everyone, even his own men. Gray is seeking to hire flyers to combat the Black Ace’s outfit, and once Davis explains the situation to Cook and Cromwell, the two daredevils are more than willing to take on said combat. Our heroes soon find themselves battling the Squadron by air and land, as, along with Gray and his daughter Dorothy (Lucile Browne), they attempt to uncover the real identity of the Black Ace and discover the motive for his attacks on the dam. We in the audience know that the Black Ace’s secret goal is the protection of his hidden gold mine, which would be submerged by the dam, but we’re as much in the dark about his identity as Cromwell and Cook are. Could the Black Ace be Dr. Flint (Robert Frazer), the slick local sawbones? Or is Gray’s crusty contracting rival, Johnson (Purnell Pratt) the guilty party? Could the Ace be Martin (Edward Peil), the shifty proprietor of the Tavern Hotel in nearby San Juan? Then there’s Collins (J. Carroll Naish), the treacherous superintendent of Gray’s construction crew who is secretly working with the Squadron; could he also be its leader? Buckle on your flight helmets and get ready to ride along, as Fred Cromwell and his friends set out to ground the Black Ace permanently.

The Mystery Squadron prominently showcases all the most enjoyable qualities of Mascot serials—a fast pace, exciting action, interesting location work, and an appealing cast—while several of the studio’s typical shortcomings–such as plot confusion–are more muted than in some of their other releases.  For example, while this serial features a masked mystery villain, the writers and director avoid showing him in the same scene with the character that turns out to be his other self (unlike Mystery Mountain). Similarly, although the mystery villain’s presence necessitates an array of suspects that behave in outrageously criminal fashion, the writers actually take the trouble to have the non-guilty suspects’ motives for their actions explained before the serial’s finish (unlike The Three Musketeers).  Ironically enough, this serial, which credits four writers for its screenplay and two writers for its original story, is a good deal more coherent than Shadow of the Eagle, which only credited two writers. This is a reversal of the standard cliché of “too many cooks spoil the broth.”

Another pitfall which Mystery Squadron avoids, unlike many airplane-centered serials, is the use of repetitive aerial sequences. While both of the Tailspin Tommy serials and The Phantom of the Air rely on airplane dogfights for almost all their action sequences, Mystery Squadron mixes its airborne stunts with plenty of fistfights, car/foot/horseback chases, and shootouts. The “dogfights” are few and far between, which makes the final, climactic airborne showdown between our heroes and the Black Ace himself a lot more exciting when it comes, since its edge hasn’t been dulled by overly similar preceding scenes. The miniature work in the airplane sequences is good, particularly in the large-scale attack on the dam in the first chapter, in which the Mystery Squadron planes unleash their unique flame-throwing devices. 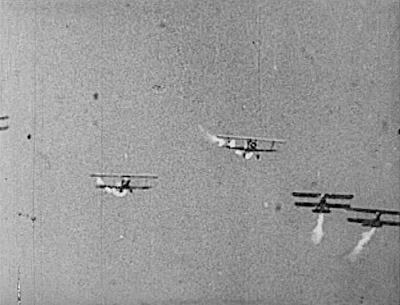 Above: The flame-throwing planes attack.

There are many memorable action sequences, both aerial and non-aerial in Mystery Squadron. Some highlights include a chase up and down and over and under the elaborate dam scaffolding, a horseback chase in which Big Boy Williams evades some pursuing henchmen amid rocky cliffs, and the sequence in which Lucile Browne and Lafe McKee, racing to the dam site to keep the misguided construction workers from lynching Bob Steele and Williams, have their car trapped in a barn by the villains–only to ram through the barn doors and precipitate a wild chase. There are also some enjoyable chases through the passages and hidden staircases of the San Juan hotel, a memorable fight on the landing above the hotel lobby that climaxes in Steele being knocked over the railings, and a good shootout in the villains’ cave hangar in which the Mystery Squadron’s planes catch fire, with explosive results. The latter two sequences are both end-of-chapter cliffhangers; other interesting chapter endings include a scene in which Williams and Steele inadvertently crash their planes into each other head on (although the resolution to this cliffhanger is frankly unbelievable), and a visually memorable “situational cliffhanger” in which Steele unmasks what he thinks is the Black Ace, only to be confronted by rifle-toting henchmen popping out from concealment, while the real Black Ace suddenly appears, sinisterly framed in the mouth of Bronson Cave. 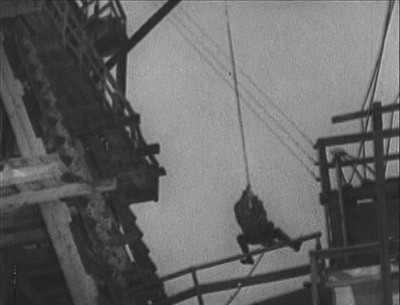 Above: Bob Steele and Big Boy Williams swing from platform to platform of the dam scaffolding to escape a mob of angry construction workers. 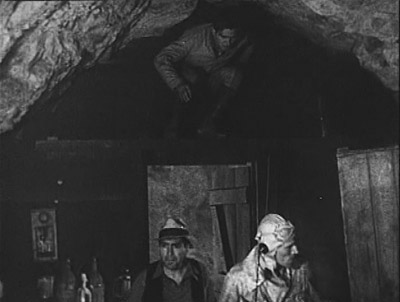 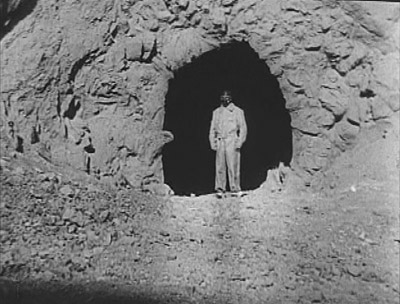 Above: The Black Ace in the mouth of Bronson Cave.

While the serial only has three principal locations—the dam site, the San Juan Hotel, and the rocky Bronson Canyon area that stands in for the villains’ mine and their cave hangar—all three of them (particularly the Bronson locales) are interesting enough to keep the audience from getting visually bored. The use of no less than four flashback chapters is a bit more boredom-inducing; this is a feature that Mystery Squadron shares with The Three Musketeers and The Wolf Dog, both made by Mascot the same year. In the serial’s defense, however, none of the recap segments take up an entire chapter as they later did in Republic serials, and at least two of them are somewhat logically justified in the plot.

The serial’s cast is a very engaging one. I’m always impressed by Bob Steele, an actor more visually qualified to play villains (mainly because of his beaky nose and beady eyes), who can, despite his appearance, portray not only an adequate but an appealing hero. His Fred Cromwell is full of gung-ho energy, good humor, and resourcefulness. Guinn “Big Boy” Williams plays off him beautifully as the easy-going Bill “Jelly Bean” Cook. Williams’ character is eccentric and awkward, but not stupid—he proves more than a match for the villains on his own at several points in the serial. His continual attempts to catch a jelly bean in his mouth make for an amusing running gag, and for an enjoyable, though predictable, punch line. Some of the dialogue interchanges between the quick-talking, quick-thinking Steele and the slower-talking, slower-thinking Williams are very funny, particularly the one in Chapter Three when they’re trying to get back to town after a plane crash; in this and other scenes they come off almost like live-action versions of Mickey Mouse and Goofy in Floyd Gottfredson’s Disney comic strips. 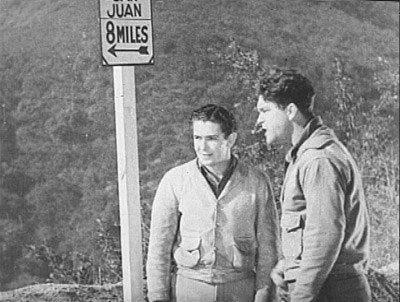 Above: Bob Steele reacts amusedly to one of Big Boy Williams’ goofier suggestions.

Beautiful Lucile Browne, as the heroine, is one of the most energetic actresses I’ve ever seen in a serial. Whether she’s registering suspicion, fear, or determination, she does so at the top of her voice and breathlessly, though this energy comes off as endearing rather than as irritating or amateurish. The usually laid-back Lafe McKee, who often winds up killed off in the first reel, gets an larger-than-usual role as Browne’s father, and gets to display considerable energy as well, combining it with an air of dignified command.

Speaking of energy, Jack Mulhall is his usual effervescent self as Hank Davis, but is relegated to the sidelines for a good deal of the serial, despite his high billing. The great character actor J. Carroll Naish, however, has a good part as the gruff, sarcastic Collins, who switches from being a suspect to a revealed principal henchmen halfway through the serial. Bob Kortman is the other principal henchman, in all his horrendously ugly, snaggle-toothed glory, sneering delightedly when he thinks the hero has been killed and growling cantankerously when discomfited. Frank Ellis, Jack Perrin, Jack Mower, Hal Taliaferro, Lew Meehan, and Lloyd Whitlock play other noticeable members of the Mystery Squadron.

The cast of suspects is led by the wonderfully stagey and deep-voiced Robert Frazer, as the smooth and highly untrustworthy Dr. Flint. Purnell Pratt, as the laid-back and cagey Johnson, is also memorable, and Edward Peil brings a sort of pompous shiftiness to his role of the hotel owner. Kernan Cripps is the unofficial leader of Lafe McKee’s hot-headed construction crew, and Edward Hearn is the mystified—but not stupid—sheriff.

For some reason, Mystery Squadron receives very little attention from today’s serial fans. Perhaps this is because some reviewers’ over-emphasis of the excess flashback sequences tends to scare fans away, or because prospective viewers avoid it thinking it it’s simply “another 1930s aviation serial”—in other words, a member of one of the less popular serial sub-genres. Whatever the reason, Mystery Squadron ought to be seen and enjoyed, as it features Mascot Pictures doing what they do best—providing their audience with fast-moving action, laughs, and excitement.

One thought on “The Mystery Squadron”