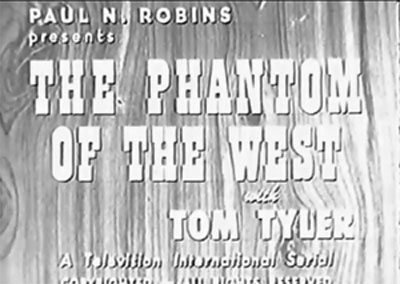 Rancher Francisco Cortez (Frank Lanning), serving a life sentence, escapes prison in hopes of clearing himself of the murder charge that sent him there. Cortez is convinced that one of seven wealthy and respectable citizens in his hometown is the true killer, and that the other six have conspired to shield the culprit; he sets out to make one of them confess. These seven suspects, led by ranchers Blair (William Desmond) and Macklin (Philo McCullough), do their best to put Cortez back behind bars or otherwise eliminate him–but must also contend with a mysterious and deadly Phantom, who seems bent on eliminating them. An equally mysterious band of masked “Night Riders” also take a hand in the conflict, threatening both Cortez and his enemies at different times; Jim Lester (Tom Tyler), the son of the man supposedly murdered by Cortez, must sort this whole tangle out, aided by Cortez’s daughter Mona (Dorothy Gulliver).

Ford Beebe, Wyndham Gittens, and Ben Cohn’s screenplay for Phantom of the West is full of characteristic Mascot plotting confusion, with the Phantom, the Night Riders, Cortez, and Cortez’s seven enemies pursuing their various goals in hazy and mysterious fashion, repeatedly kidnapping, framing, and attacking each other–or the hero and heroine–in the process. However, the lengthy last-chapter revelation sequence does a much more satisfying job of explaining the preceding chapters’ convoluted action than most such Mascot finales; though there are still some loose ends and minor illogicalities left standing after Phantom’s fadeout, they’re nowhere near as baffling or frustrating as the questions raised by the conclusions of many of their contemporaries. The mystery villain is also unusually well-concealed by Mascot standards; the revelation of his identity comes as a genuine surprise.

Above: Tom Tyler and Dorothy Gulliver are confronted by the Phantom.

Beebe, Gittens, and Cohn are also to be commended for providing an acceptable final-chapter explanation for a lengthy earlier sequence that would otherwise have been negated by the revelation of the Night Riders’ true identities–a scene whose equivalents went blithely unexplained in Mascot efforts like The Lightning Warrior and The Galloping Ghost. However, Phantom’s screenplay is far from perfect; like most Mascot serials, its basic plot is too slight to prevent repetitiousness from creeping into the narrative–although its compact ten-chapter length keeps the storyline from wearing itself out too much (Phantom was the last sound serial to feature so low an episode count). Additionally, the writers manage to mask the story’s thinness by subjecting the characters to one puzzling or exciting incident after another, in classic Mascot style. 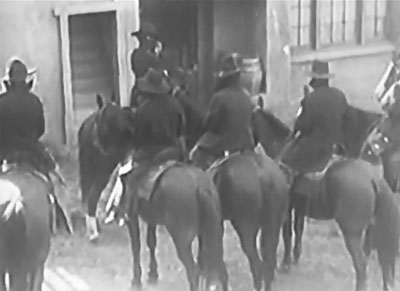 Above: The Night Riders arrive to investigate a murder scene.

Phantom’s action sequences are handled with great skill and polish by early-1930s standards, thanks to the work of the invaluable Yakima Canutt (who doubles Tom Tyler), his fellow-stuntman Tracy Layne, stuntmen/actors Joe Bonomo and Kermit Maynard–and Tyler himself; the star can be seen handling a great deal of his own stuntwork, including an impressive vault over a piano. The fistfight between Tyler and Bonomo in the woods in Chapter One is one highlight–a rough-and-tumble but well-edited brawl replete with leaps and flips. The saloon fight in Chapter Eight is also first-rate; this long and lively setpiece has Tyler chucking henchmen through the air, toppling furniture on them, racing up the stairs, and performing the aforementioned piano-vaulting.

The serial’s most memorable action scene, however, is the lengthy clash between Tyler and the Night Riders at the “Canyon of Calamity” in Chapter Six–a terrific sequence that occupies about half the episode and boasts a short but fierce shootout, an ingenious piece of trickery by Tyler and his ever-helpful horse, a roof-climb, a couple of good fistfights, and Tyler and Dorothy Gulliver’s exciting attempt to escape the canyon by clambering down a ramshackle trestle. The Bronson Canyon area provides a striking backdrop to this prolonged battle; Bronson Cave also puts in an appearance at the beginning of the sequence, while Kernville’s forests, roads, canyons, and rocks provide the setting for most of the serial’s other action scenes–among them the chase and shootout in Chapter Four, and the excellent stampede sequence that climaxes Chapter One. Other action highlights include Chapter Two’s short chase and the pair of second-story balcony leaps that conclude it, the chase up and down the burning staircase later in the same episode, and the chase and fight on the same stairs in Chapters Nine and Ten. 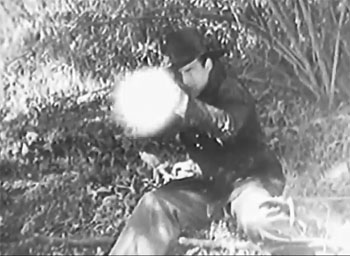 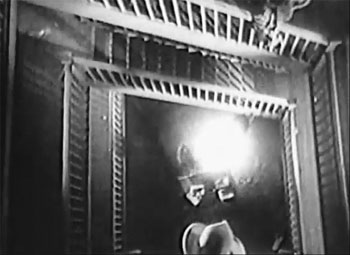 Above, top left and right: Night Riders are knocked over by rifle-packing Tom Tyler during the battle at Bronson Canyon in Chapter Six. Bottom left: a lamp crashes to the bottom of the stairwell and starts a fire, as Tyler pursues the Phantom and the captive Dorothy Gulliver down the stairs towards the end of Chapter Two. Bottom right: Tyler slugs an opponent off of the staircase’s top landing in Chapter Nine, as Dorothy Gulliver watches.

Both staircase sequences are made especially striking by director Ross Lederman and cinematographers Joseph Novak, Benjamin Kline, and M.A. Anderson–who fill the scenes with memorably stylish downward shots that give a dizzying sense of the stairwell’s depth. Director and cameramen also show considerable style in their careful visual framings of the Night Riders’ repeated horseback forays; these scenes, incidentally, were originally accompanied by the Riders’ rendition of the “Like shadows/From out of nowhere…” song later heard in Fighting With Kit Carson, but the ballad has been replaced by wordless music in all extant prints of Phantom–prints derived from a television reissue of the serial. This alteration has an odd effect on some scenes, particularly the Riders’ advance on Blair’s ranch in Chapter Five; the dramatic close-ups of each character reacting to the song look silly once the song itself has been removed. The TV version of Phantom also appears to have been cut in a few places; two chapters are unusually short, and a scene of Jim Lester dancing with Blair’s daughter (which looks as if it would fit into one of the truncated episodes) appears twice in chapter-opening recap scenes, but never surfaces within a chapter.

Above: A striking shot of the Night Riders against the Kernville skyline.

Several of the chapter endings in Phantom are “dramatic” situational ones–including the Chapter Three ending (which has the lights going out in the saloon during a shootout), and the endings of Chapters Eight and Nine (both of which have the heroine apparently seized by the Phantom). Other cliffhangers are truly spectacular, however–the Chapter One ending (in which hero and heroine are crowded off a cliff by stampeding horses), the hero’s fall down the stairwell at the end of Chapter Two, his slide down a shale slope at the end of Chapter Five, and his plummet from the trestle at the end of Chapter Six. Some of these perils are marred by uninspired live-through-it resolutions–though said resolutions don’t cross the line from unimaginativeness into outright un-believability. 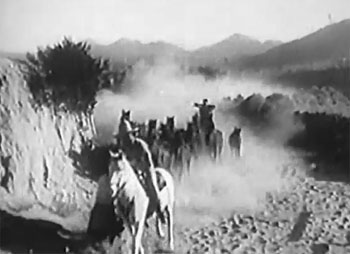 Above: Tom Tyler and Dorothy Gulliver are chased by stampeding horses (left) and crowded off a slope by them (right) at the end of Chapter One.

Phantom was only Mascot’s second all-talking serial, and its actors–like performers in other early sound films–struggle at times to adjust to the new techniques of the talkies; however, the cast does a respectable job overall. Tom Tyler overdoes his facial expressions somewhat in his first scene (exaggeratedly “registering” vengefulness when talking of his father’s murder), but is soberly and straightforwardly calm in most of his subsequent scenes–delivering his lines with authoritativeness and complete conviction (even when they sound rather stilted), bestowing intimidatingly grim glances on suspects, and even displaying breezy cheerfulness on occasion. He’s also very effective in the action sequences, his rangy but muscular frame making his successful pummeling of various henchmen utterly convincing.

Above: Tom Tyler goes looking for a killer.

Pretty Dorothy Gulliver–extremely fetching in Spanish blouse and riding skirt–is, like Tyler, appealingly energetic and unselfconscious when handling her frequently melodramatic dialogue; she also reacts with emphatically wide-eyed alarm to danger, and assumes a winning air of solemn determination when called on to assist Tyler. While her unselfconsciousness is sometimes so extreme as to make her acting seem careless or amateurish (as during her confrontation with Blair’s daughter in Chapter Nine), her occasional awkwardness does little to diminish the enthusiastic charm of her performance.

Stage and silent-film veteran William Desmond is floridly theatrical but still very good as the suspicious Blair, easily combining grave and robust dignity with suspiciously oily suavity. Sharp-voiced Philo McCullough is gruffer and less dignified as Macklin, but is even more slick and shifty, as well as slightly less hammy. Tom Santschi, as saloon-owner Landers, is the third most prominent suspect, and delivers one of the serial’s more natural and low-key performances, coming off as furtive, but also quietly tough and even rather likable. The other four suspects–Dick Dickinson, Kermit Maynard, James Carlisle, and W. J. Holmes–are given little to do besides worry about over the threat posed by Cortez and the Phantom, in varying keys of nervousness.

Frank Lanning is suitably intense–sometimes to the point of seeming craziness–as the wronged fugitive Cortez; his energy only falters in the final chapter, when he’s called on to deliver a lengthy piece of exposition in a single take, and painfully stumbles several times despite the obvious assistance of cue cards. A vigorous and comparatively young Frank Hagney, later a background thug in innumerable PRC B-westerns, delivers a strong supporting performance as the gruff and surprisingly capable Sheriff. Tom Dugan plays the bragging town knucklehead who aspires to be Hagney’s deputy, overdoing the “comic” stuttering that he used more sparingly (and more amusingly) in the later Galloping Ghost. His alleged comedy-relief interludes are annoying, not funny, but aren’t unbearable; fortunately, they tend to provoke other characters (including Tyler’s and Hagney’s) to irritated reactions that provide some catharsis for the viewer.

Hallie Sullivan plays William Desmond’s loyal daughter, an interestingly offbeat character who unfortunately has little to do; gigantic Joe Bonomo is Philo McCullough’s foreman/henchman, and cuts a truly formidable figure in the action scenes (the short and irrelevant sequence–reprised in a later episode–in which he throws a pesky drunk through the air seems to have been added to give him another opportunity of demonstrating his prowess). Al Taylor is another henchman, while Walter Miller narrates each chapter’s recap segment and provides the voice of the cloaked Phantom. 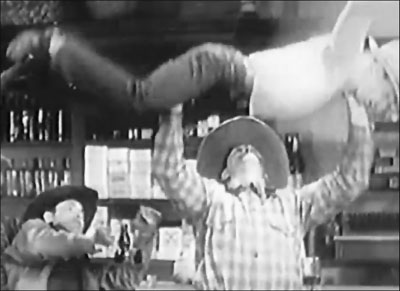 If a viewer can avoid being overwhelmed by unnecessary layers of plotting convolution, and can tolerate the occasional acting excesses common to early talkies, he will find that The Phantom of the West has much to offer a serial buff–an extremely likable hero and heroine, an interesting supporting cast, a plot that creaks badly at times but holds together better than most Mascot storylines, and (most memorably) plenty of well-shot and well-staged action scenes. 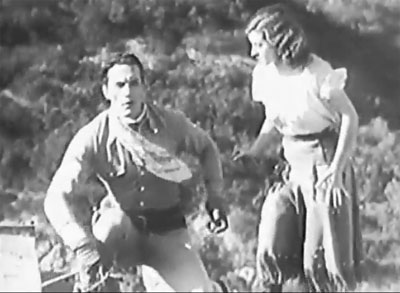 Above: Tom Tyler and Dorothy Gulliver prepare to make an escape from the Night Riders.

4 thoughts on “The Phantom of the West”