Master criminal Anthony Waldron (Edmund MacDonald)–the black sheep of the distinguished Waldron family, mistakenly thought dead by the police–has set up a secret hideout beneath the mansion of his wealthy and respectable grandmother (Virginia Brissac), whom he keeps under control through the use of “Hypnotrene,” a drug he discovered in Africa. Working out of this secure headquarters, Waldron plans to steal the valuable prototype of a revolutionary giant-sized submarine invented by one Dr. Kittridge; unfortunately for the ambitious villain, the doctor has assigned the construction of the sub’s component parts to several other inventors, all of whom are unknown to each other. After accidentally killing Kittridge with a Hypnotrene dose, Waldron starts searching for the late scientist’s collaborators–as does G-man Grant Farrell (Dennis Moore), who’s been assigned to keep the submarine from falling into the wrong hands. A third party takes a hand in this search–an unseen figure who calls himself The Mysterious Mr. M; this mystery man provides Waldron with useful information, but also blackmails the irritated criminal into obeying his orders.

The above synopsis, lengthy as it is, only provides a rough outline of Mysterious Mr. M’s plot, and leaves out the names of the narrative’s many supporting characters, all of whom have plenty to do–and a lot more to say. In other words, Mr. M is burdened throughout with excessively long-winded expository scenes, the curse of most late Universal serials; here, Kittridge’s complicated submarine sub-contracting plan, Anthony Waldron’s equally complicated criminal setup, and the strange relationship between Waldron and Mr. M are the chief plot points that writers Paul Huston, Joseph Poland, and Barry Shipman must make clear to the audience in each episode–and the complexity of each point necessitates a great deal of dialogue. The cast members (particularly the serial’s principal villains) do a good job of making their characters’ repeated exposition sessions lively and interesting enough–helped by the writers, who find several ways of slightly varying these inevitable sequences from chapter to chapter. However, neither writers nor actors can keep each chapter’s running time from being largely consumed by talk; as in most Universal serials of this vintage, by the time the plot is recapped and each character has re-established his personality and his purpose in the narrative, it’s usually time for a chapter ending. 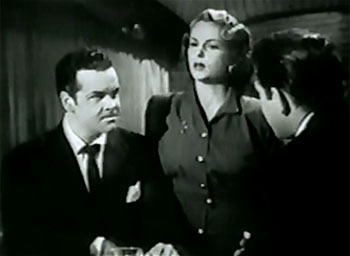 However, Shipman, Poland, and Huston do manage to periodically shake up Mr. M’s cut-and-dried plotting format with a couple of good narrative twists; they also give the plot some forward momentum by allowing Waldron to gradually assemble the pieces of the submarine–which in turn lends some genuine suspense to Farrell’s race to stop him. Additional suspense is derived from the villainous Waldron’s repeated use of Hypnotrene to make various good guys do his bidding; as the serial progresses, our hero frequently finds apparently trustworthy people turning on him in unsettling Invasion of the Body Snatchers style–usually when a striking clock triggers Waldron’s post-hypnotic commands, a nicely eerie touch. The conversion of co-hero Kirby Walsh into a Hypnotrene-drugged secret ally of Waldron’s leads to some particularly memorable suspense; it’s also cleverly used to set up Farrell’s foiling of Waldron’s seemingly sure-fire scheme in the final episode. Another aspect of the concluding chapter–the exposure of Mr. M’s identity–is less satisfactory; while the revelation of the culprit doesn’t constitute a flagrant cheat in the way some Mascot-serial unmaskings do, the writers frustratingly don’t even try to explain how the culprit managed to gain the important information that he utilizes throughout the serial. 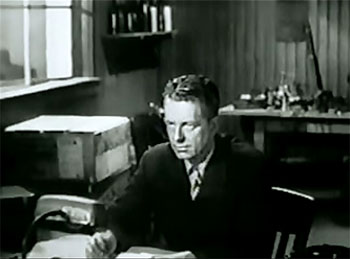 Though outnumbered by dialogue sequences, the action scenes in Mr. M are quite enjoyable when they do occur. Dave Sharpe (who doubles star Dennis Moore), Tom Steele (who doubles co-star Richard Martin and assorted heavies), and Ken Terrell (who also some heavies) give a considerable lift to the serial’s fistfight scenes–even though most of these scenes are cut short before the stuntmen can really get up a good head of steam; among the best of these well-performed but truncated brawls are the Chapter Two fight at the parking garage (which lasts longer than most of the other combats), the brief fight in the living room of the Waldron mansion in Chapter Six, and the Chapter Ten apartment fight. Non-fistfight action highlights include Chapter Two’s car chase along country roads, the Chapter Six car chase down a city street (after the hero has narrowly escaped a drive-by shooting), and the quick gun battle between the hero and two henchmen at a suburban house in Chapter Seven. 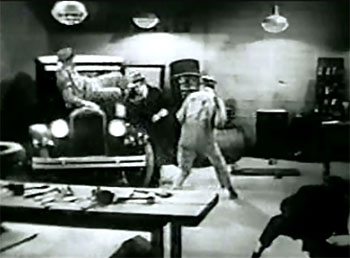 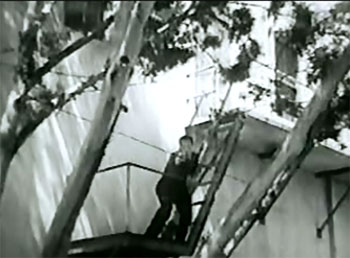 Above left: A shot from the parking-garage fight. Above right: Dennis Moore fires at an escaping killer during a brief but good fire-escape chase.

The action scene that leads up to the Chapter Seven cliffhanger–the villains’ plane chasing the heroine’s bus along a desert road–is also very good; it’s almost certainly stock footage from a bigger-budgeted production, but it’s incorporated neatly and smoothly into the serial. In fact, production values are good throughout Mr. M; stock footage (as aforementioned) is blended well with new scenes, extras are plentiful on the backlot city streets that provide settings for much of the action, and scenes in the villains’ underground lab (as well as Mr. M’s unmasking scene) are shot with an eye towards eerie atmospherics by cameraman Gus Peterson and directors Vernon Keays and Lewis Collins.

Above left: The plane-bus chase from Chapter Seven. Above right: Edmund MacDonald and Danny Morton descend the stairs into the villains’ Frankenstein-like underground lab; Mauritz Hugo is in the foreground.

Some of the cliffhangers in Mr. M are stock footage from earlier Universal efforts–like the collapsing pylons from The Phantom Creeps–but others, rather surprisingly, are Republic serial cliffhangers, including the oil-field fire from King of the Texas Rangers and the oft-seen paint-factory explosion from G-Men vs. the Black Dragon. These Lydecker-Brothers-created chapter endings are as effective here as in their original settings, but it feels odd to see them turn up in a non-Republic production. Among Mr. M’s few original cliffhangers, the most memorable is the one that has a shocked Dennis Moore gunned down by his hypnotized sidekick Richard Martin; the resolution to this situation is also pleasingly clever. The suspensefully built-up Chapter Twelve ending, with Moore trying to “talk down” heroine Pamela Blake after she’s stranded in a pilotless plane, is effective as well–even though the situation and a good deal of the accompanying footage is borrowed from Sky Raiders.

Above: Hero is apparently killed by co-hero at the end of Chapter Eight.

Dennis Moore handles his leading role in typically competent but uninspired style, rattling off his dialogue with grim determination and deep-voiced assurance but rarely displaying much personality; however, he does show a bit more range than usual when reacting to the death of his character’s brother, successfully conveying both anger and choking grief. Richard Martin (well-remembered as Tim Holt’s sidekick in a long and excellent series of post-war RKO B-Westerns) maintains a properly gruff and straightforward “flatfoot” demeanor as Moore’s police-detective aide–but is also likably laid-back and affable at times, which helps him to counter-balance Moore’s grimness.

Above: Pamela Blake and Richard Martin try to console Dennis Moore after the aforementioned death of his brother.

Pamela Blake is cheerily and attractively enthusiastic as insurance-investigator heroine Shirley Clinton, but never makes her character seem at all reckless or irresponsible; on the contrary, she successfully registers intelligence and thoughtful concern throughout the serial. Joseph Crehan, as the dogged police chief, rounds out the good guys’ team; as in his similar role in Gang Busters, he’s jovial, shrewd, colorfully grumpy, and almost fatherly by turns, and comes off as an extremely experienced and capable authority figure.

Edmund MacDonald makes a somewhat offbeat but interesting criminal mastermind; comparatively young and decidedly brawny, he seems much more physically threatening than the average brains heavy, while his aggressively authoritative and sneeringly confident manner make him credible as a boss villain. Danny Morton, slicker but less belligerently self-assured in manner, provides a good contrast to him as his cousin and chief lieutenant Derek Lamont. Jane Randolph, probably best-known for her supporting roles in Cat People and Abbott and Costello Meet Frankenstein, is smug, sly, and sophisticated as Morton’s equally villainous sister Marina; she does little but assist MacDonald and Morton in verbally recapping the plot, but does that quite well.

The drawlingly sarcastic Jack Ingram and the grim, hatchet-faced Joe Haworth make an excellent pair of action heavies, though their screen time is somewhat limited due to the preponderance of higher-ranking villains; Ingram’s best moments come when he’s arrested by the good guys and gets to sneer at them in characteristically lazy but insolent style. Mauritz Hugo quietly steals a couple of scenes as MacDonald’s lab assistant; his background reactions in various headquarters scenes (veering from wariness to curiosity to surprise to cynical casualness) are worth noticing. Virginia Brissac is very likable as old Mrs. Waldron, the villains’ unwitting pawn; her appealingly kindly and frail-but-dignified bearing make the viewer genuinely concerned about her plight. As her family lawyer, first-rate character actor Byron Foulger is his typically timid and slightly befuddled self.

Cyril Delevanti does an excellent turn as a blind but resourceful inventor, while John Hamilton is seen briefly as the ill-fated Kittridge; William Ching, who looks like a taller and blonder version of Dennis Moore and who sounds noticeably like him as well, is very appropriately cast as Moore’s brother in the early episodes. George Eldredge has a sizable one-chapter role as a helpful plant manager, Howard Negley and Keith Richards make a series of appearances as Washington officials, Harry Strang is a scientist, Beatrice Roberts (Queen Azura in Flash Gordon’s Trip to Mars) a lady doctor, Jack Rockwell a watchman, Daral Hudson a cop who helps Joseph Crehan recap the plot, and Robert Barron a minor heavy. Anthony Warde, most surprisingly, pops up briefly as a sympathetic and non-villainous inventor, dropping his characteristic sneer and speaking in an almost unrecognizably good-natured voice.

The Mysterious Mr. M would prove to be the last serial released by Universal; the studio decided to stop turning out chapterplays in the mid-1940s, leaving one last serial script (for a title to be called Yukon Sky Patrol) unproduced. Like most of the other outings from those last few years of Universal serial-making, Mr. M is well-acted, well-written, and well-made enough to maintain a certain level of interest throughout, even though it remains far too dialogue-heavy to be more than occasionally exciting.

Above: One of the recordings through which the Mysterious Mr. M communicates with his cohorts (and the audience).

2 thoughts on “The Mysterious Mr. M”