Vic Hardy (Hugh Prosser), a scientist working for the Fairfield Aviation Company, has discovered that mysterious “cosmic rays” are emanating from a small Pacific isle. Before Hardy and his friend and employer Jim Fairfield (Pierre Watkin) can investigate this phenomenon further, the scientist is kidnapped and taken to the island in question; there, he’s forced to work in the laboratory of the villainous Jason Grood (Charles Middleton)–who plans to rule the world by sending a death-ray into outer space aboard an “aeroglobe,” then using it to wipe out anyone on Earth who objects to his dictatorship. However, Fairfield, his young niece and nephew Betty and Billy (Joe Brown and Rosemary LaPlanche), and their athletic friend Jack Armstrong (John Hart) follow Hardy and his kidnappers to the island, and continually interfere with Grood’s schemes. The would-be despot is also hampered by the island’s natives (whom he tries to keep in check by posing as their god Xaltar) and by the treachery of one of his associates, shipping magnate Gregory Pierce (John Merton).

Based on a popular radio show, Jack Armstrong is one of the most frustrating of the several below-par serials turned out by Sam Katzman during his early years as Columbia’s serial producer. Unlike fellow-failures Who’s Guilty (a foredoomed attempt at a serialized whodunit) and Son of the Guardsman (an equally ill-advised medieval-swashbuckler chapterplay), Armstrong boasts a central plot that seems ideally suited to the serial genre. Grood’s plot to conquer the world is both colorfully weird and (by chapterplay standards) quite plausible, while the island setting allows exotic-adventure trappings to be combined with the science-fictional gimmickry. Add a good cast to these promising plot elements, and you have the makings of a very enjoyable serial.

Unfortunately, though provided with a strong cast and a good basic storyline, Jack Armstrong’s writers, director, and producer fail to make the serial anything more than intermittently and tepidly entertaining. Part of the fault lies with Armstrong’s running time; Columbia’s studio policy of making each of their serials fifteen chapters forces writers Leslie Swabacker, Royal Cole, George Plympton, Arthur Hoerl, and Lewis Clay to spin their narrative wheels at too many points throughout the serial. While Grood’s efforts to control the island natives provide respectable subplot material, the reckless attempt by Pierce to “take over” Grood’s “whole setup” with only a handful of followers is so incredibly stupid in conception as to make its purpose as padding embarrassingly obvious. The Pierce subplot also has the effect of shoving the serial’s ostensible heroes aside for the better part of four chapters; Armstrong and his friends spend a bit too much time on the sidelines watching the heavies fight it out. 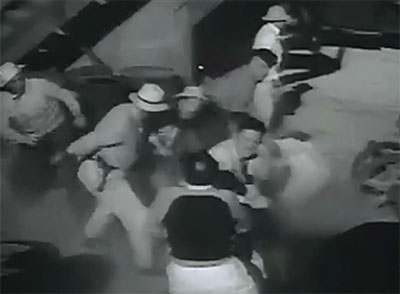 Above: Rival sets of heavies slug it out.

However, even when not sidelined by infighting villains, Armstrong’s protagonists are far from impressive. In chapter after chapter the writers clumsily contrive to keep Jack and the Fairfields from taking any too-direct action against Grood, in order to prolong the story; the good guys’ vague-sounding ruminations about their next move begin to be extremely annoying around the serial’s two-thirds mark–particularly when their “move” repeatedly turns out to be an inconclusive scouting expedition in or around Grood’s hideout. The strange dynamic between the serial’s two heroes (Jack Armstrong and Jim Fairfield) accentuates the irritating indecisiveness of their maneuvers; Jack, as a supposed teenager, can’t authoritatively outline strategies and initiate action, but instead must submit all his suggestions to Fairfield. This wouldn’t be a problem if “Uncle Jim” was a decisive older-hero figure like Nayland Smith or Dr. Zarkov, but he isn’t; instead, he conducts himself as a sort of chairman of the board, modifying or mildly rejecting Jack’s ideas but rarely suggesting anything helpful himself. The laughable lot-drawing scene in Chapter Nine provides the strongest instance of this embarrassing dynamic, but it (unfortunately) isn’t the only such example in the serial. 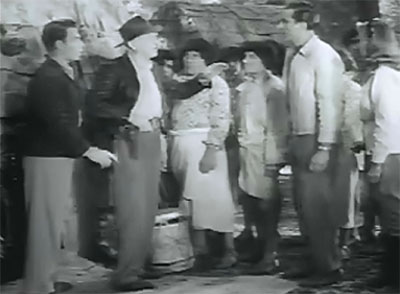 Above: Jim (Pierre Watkin, raising hand) orders John Hart to “wait” before rushing off on a rescue mission.

Yet more narrative padding is provided by one of producer Katzman’s favorite cost-cutting devices–numerous shots of characters walking to and from various locations; however, the scenery they walk through (the Monogram Ranch and Kernville, chiefly) is certainly well worth looking at, even if it doesn’t really resemble a tropical or even semi-tropical island. The big “stamp mill” (which looks rather like a working lumber yard) and the Indian village with its stone buildings and wide village square also provide good outdoor backdrops for the action scenes. The action scenes themselves are generally small-scaled, but are not bad at all, thanks to the expertise of stuntmen Eddie Parker and George DeNormand; the fight on the hillside in Chapter Eleven, the fight in the cave in Chapter Twelve, and the fight in the back of a moving truck in Chapter Thirteen are particularly well-done. Director Wallace Fox adds some unexpected visual flourishes to the last-named sequence, using a series of quick close-ups of the combatants to liven up the scene.

Above: Shots from the Chapter Thirteen truck fight.

The big fistfight/shootout at the mill between the two teams of villains is also well-staged, while the lengthy ritual combat between good native Umala and bad native Naga is filmed so as to take maximum advantage of the above-mentioned village set. However, this latter sequence lacks the impact it should have, largely because it simply looks silly to have two tribal champions formally battling to the death with their fists, instead of using knives, swords, or some other more dignified weapon. This “battle of the warriors” (to borrow the title of the chapter it appears in) should have been set apart from a mere informal clash in some way, but staging it with weapons added would probably have taken Fox a little more time–and thus leached away a little more of Katzman’s money.

Above: The Slugfest of the Warriors.

Katzman’s budget-consciousness also forces the last-chapter explosion of the aeroglobe to disappointingly take place offscreen; the producer obviously didn’t want to destroy the (quite respectable) miniature used for the ‘globe. Katzman’s penny-pinching also appears to be responsible for the badly-mishandled Chapter Twelve “light-ray” cliffhanger sequence–which, judging from a pressbook synopsis, seems to have been cavalierly altered when the peril/resolution proved too time-consuming to stage properly. Other cliffhangers are also poorly staged, albeit not with the same degree of sloppiness; time and again episodes come to an abrupt end as soon as the characters find themselves in danger, with none of the editing buildup typical in non-Katzman serials; the Chapter Three fire-pit fall, the Chapter Eight tumble into the swamp, and the Chapter Fourteen raygun-malfunction aboard the aeroglobe are only three examples. 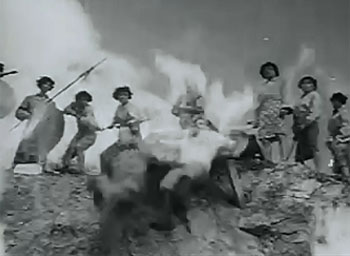 Above: Stand the good guys on the (hitherto unseen) fire-pit platform, then let the platform drop a second later–don’t waste any time with a build-up of suspense in this serial, if you please.

With a couple of exceptions, the cast of Armstrong is better than its script or its cliffhangers. John Hart, an athletic, laconic, and grimly handsome actor, would have made a perfect tough-guy hero in a more traditional serial, but is horribly miscast as the titular “All-American Boy;” he looks too old for high school or even college, and his obvious maturity makes his deference to Uncle Jim seem that much more awkward and unbelievable. The excellent character actor Pierre Watkin is also miscast as Jim Fairfield; though he was very good as the acerbic Perry White or the villainous Crogan (in Green Hornet Strikes Again), he’s simply too dry and cold an actor to give Fairfield a properly warm and avuncular demeanor. He’s also too elderly to be very convincing when he’s engaging in physical derring-do. 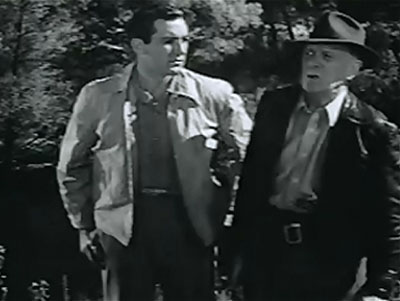 Above: John Hart and Pierre Watkin.

Former Miss America Rosemary LaPlanche, is like John Hart, too old for her teenager role–but is a welcome presence nonetheless, thanks to her pleasant personality and her stunning good looks; unfortunately, her screen time steadily diminishes as the serial progresses. Joe Brown, as her brother Billy, provides unfunny and obnoxious “comic relief” by repeatedly whining about being hungry; his one-note dialogue would have become annoying no matter who delivered it, but it’s rendered additionally grating by Brown’s froggy, thickly New-York-accented voice and by his unappealing grimaces; it’s frankly impossible to believe that this appalling gremlin could be related to LaPlanche’s lovely Betty. 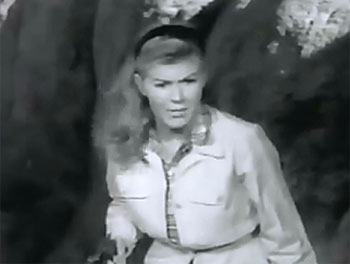 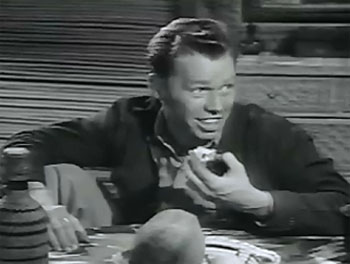 Above: Rosemary LaPlanche and Joe Brown.

Charles Middleton, at the end of his long and illustrious serial-villain career, is as entertaining as ever as the megalomaniacal Jason Grood. The septuagenarian actor is understandably less energetic than he was in his wonderful turns as Ming, but still manages to convey larger-than-life menace even when slyly underplaying; his suave attempts to convince the good guys that he’s on their side, his sarcastic and disdainful rebukes of his men, and his grimly exultant speeches about his coming mastery of the world are all highly entertaining. 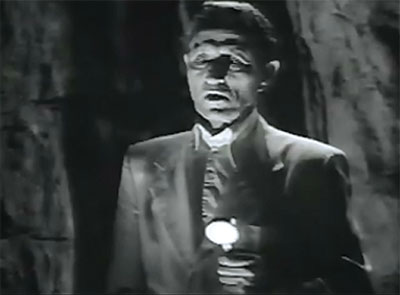 Above: A creepily underlit Charles Middleton issues commands to the duped natives via radio.

Jack Ingram is his usual grumpy and sardonic self as Grood’s chief henchman Blair; John Merton is also in good form as the scheming Pierce, whether he’s growling at his associates or putting on a bluff and boisterous façade to deceive the Fairfield group. Veteran serial heavy Wheeler Oakman (who looks painfully old and frail here) is out of his depth as Grood’s chief scientist Zorn, however; the old pro does his best to make his character’s long-winded pseudo-scientific dialogue sound as convincing as possible, but doesn’t quite succeed, too often coming off as listlessly confused. 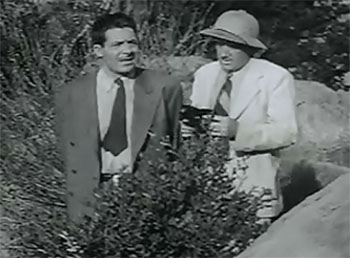 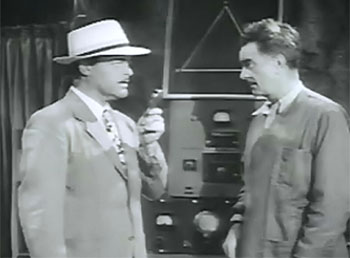 Katzman regular Hugh Prosser is very good as the dignified and cagy Vic Hardy, who smoothly works against Grood even when imprisoned in his lab. Claire James, a runner-up in the 1938 Miss America contest, is quite beautiful as native princess Alura but seems uncomfortable when it comes to acting; her attempts to issue regal orders to her followers sound shrilly petulant instead of queenly, while her supposedly warm expressions of sympathy for the good guys come off as painfully flat and insincere. However, Frank Merlo does a fine job as Grood’s ally in the native camp, the treacherous chief warrior Naga–smirking cynically as his fellow-tribesmen bow before the aeroglobe and sneering nastily when the princess tries to interfere with him. Russ Vincent is effective enough as Naga’s enemy, the pugnacious Umala, although he sometimes overdoes his character’s furious snarling at the villains. 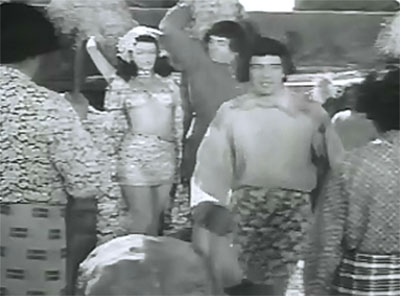 Jack Armstrong’s location work, interesting central premise, and Middleton’s master-villain turn keep the serial from being quite as big of a train wreck as the aforementioned Who’s Guilty or Son of the Guardsman–but it’s an even bigger disappointment than those efforts, considering its greater potential.

Acknowledgements: My thanks to Michael Litant, for providing the digital copy of Jack Armstrong that in turn furnished the illustrations for this review.