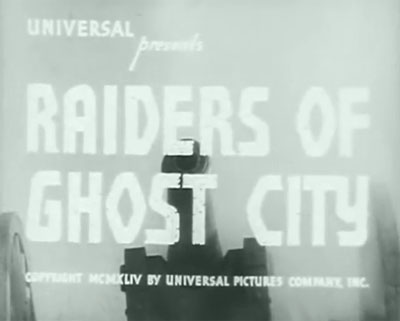 In the waning days of the Civil War, Captain Steve Clark (Dennis Moore) of the Union Army is transferred to the Secret Service and assigned to track down a band of Confederate guerillas, who have been hijacking gold shipments near the California town of Oro Grande. The guerillas are led by Steve’s old West Point classmate, Confederate Captain Clay Randolph (Regis Toomey), who relies on a mercenary espionage network headed by Oro Grande saloonkeeper Alex Morel (Lionel Atwill) for intelligence support. However, neither Randolph nor Clark knows that Morel and his associates are actually Prussian agents, or that they intend to ship the gold not to Richmond but to Berlin–where it will be used to help their government purchase Alaska from Russia, giving Prussia a useful military foothold in North America. This ambitious plan is soon endangered by Clark, who–aided by resourceful Wells Fargo agent Idaho Jones (Joe Sawyer)–gradually uncovers the Prussians’ conspiracy.

Raiders of Ghost City is a World War 2 spy serial in period dress; its Prussian villains are obvious (and anachronistic) Nazi surrogates, while its plot is driven not by a battle for a gold mine or valuable ranch land (as in most of Universal’s other Western serials), but by a protracted espionage duel between heroes and heavies. After the hijacking of the gold wagon in the first chapter, the Prussians devote their energies to killing off potential informers, attacking the snooping Clark, or trying to keep important papers out of Clark’s hands–while Clark in turn doggedly resists these attempts to throw him off the trail, following a series of clues that eventually leads him directly to Morel. This offbeat plotline is more sequential and less repetitive than the narratives of earlier Universal Western chapterplays, and is punctuated with some interesting twists (Randolph’s discovery of Morel’s double-dealing, the unmasking of a traitor at the Wells Fargo station, a Prussian-instigated Indian uprising); writers Morgan Cox and Luci Ward also managed to neatly work real historical events (the end of the Civil War, Lincoln’s assassination) into their story.

Above: Dennis Moore examines one of the mysterious gold coins used as identification tokens by the members of the spy ring.

Sequential though Raiders of Ghost City‘s storyline is, it moves at a somewhat glacial pace, being filled–like other later Universal serials–with unnecessary verbal recapitulations of the plot. In chapter after chapter, Morel and his associates discuss their goals at length, while Clark and his allies devote several minutes to recounting their investigative progress; minor supporting characters like Doc Blair, Morel’s code clerk Frederick, or the stage-station employees also participate in regularly-scheduled dialogue scenes, in order to remind the viewer of their existence. Though these sequences are well-written and engagingly acted, they take up far too much screen time; by the time all the characters have re-identified themselves, recapped the plot, and planned their next move, it’s usually time for the chapter-ending action sequence–which is then followed by another short action scene at the beginning of the next episode, after which the cycle of talk resumes till it comes time to build up to the next cliffhanger. However, this cycle is disrupted in the final two chapters, which are both action-packed; these concluding episodes constitute a climax that’s unusually strong by Universal’s mid-1940s standards, one which allows the heroes to physically battle the villains in the final showdown, instead of non-violently engineering their downfall (as in The Great Alaskan Mystery) or standing by as they destroy each other (as in The Master Key). 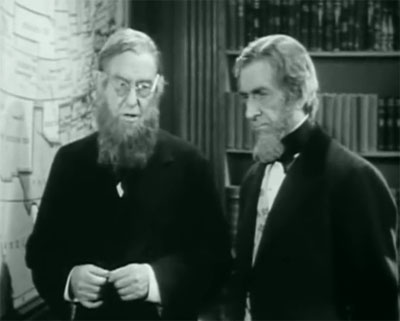 Raiders’ action scenes, though scanty in comparison to its dialogue scenes, are very well-done; the fight in the baggage car in Chapter One, the horseback chase and shootout in Chapter Five, the shootout in the cave in Chapter Six, and the Chapter Seven gun battle in the rocks are particularly strong. The horseback chase in Chapter Eight is also good, although its use of stock footage is a bit obvious; other highlights include the Chapter Ten gunfight in the saloon and the energetic final fistfight in the saloon’s basement in Chapter Thirteen. Dale Van Sickel doubles leading man Dennis Moore in the latter scene and in other fistfights; Ken Terrell and Henry Wills can be spotted doubling villains George J. Lewis and Lionel Atwill (respectively) in the aforementioned climactic fight. Iverson’s Ranch is utilized to good effect in the serial’s outdoor action scenes; the Western town at Kernville serves as the villains’ titular ghost-city headquarters, while Universal’s own Western street stands in for the inhabited town of Oro Grande. 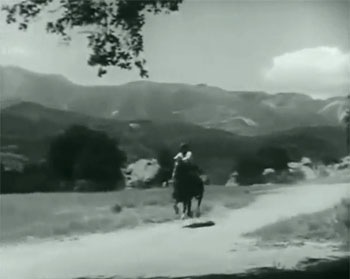 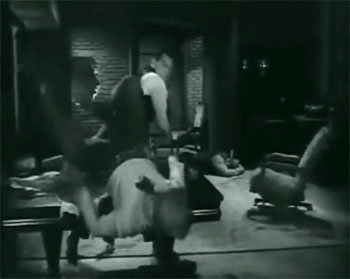 Above left: Dennis Moore galloping down a trail at Iverson’s during the Chapter Five chase. Above right: Ken Terrell sends Dale Van Sickel toppling over a table during the climactic fight scene.

The serial’s most memorable action setpiece is probably the large-scale and visually spectacular ghost-town battle with hostile Indians, which bridges Chapters Twelve and Thirteen. Most of the credit for this sequence, however, goes not to Raiders’ directors Ray Taylor and Lewis D. Collins, but to director Alfred E. Green and famed cinematographer Stanley Cortez–who originally shot it for Universal’s big-budgeted 1941 A-Western, Badlands of Dakota. While the footage is not original, it still works very well here, and provides a satisfyingly dynamic payoff after all the dialogue scenes in Raiders’ earlier chapters. The Badlands stock is blended quite smoothly with new scenes, and is practically undetectable to anyone not familiar with the A-western; the only noticeable incongruities resulting from the stock use are occasional glimpses of women in the ranks of the hero’s supposedly all-male paramilitary squad of miners (the original Badlands sequence was taking place in an inhabited town full of settler families, not the ghost town featured in the serial). 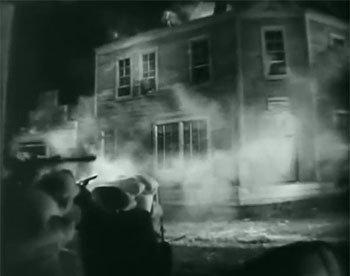 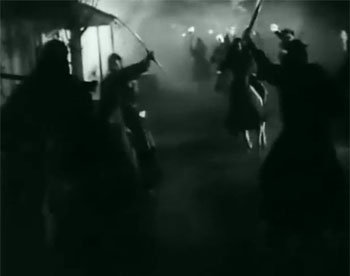 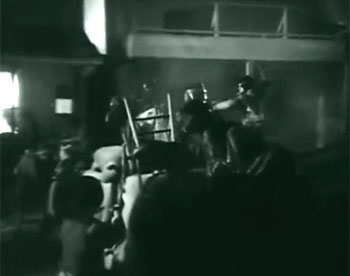 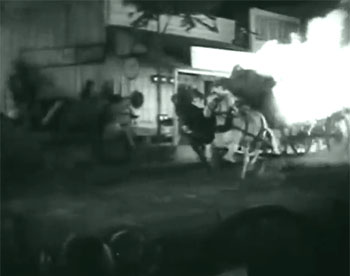 Above: Shots from the slam-bang battle in Ghost City.

Cliffhanger sequences in Raiders are alternately ordinary and impressive; the fall from the saloon roof at the end of Chapter Twelve (more Badlands of Dakota footage) is very striking, as is the runaway baggage-car scene that ends Chapter One (this scene is probably also stock-footage-derived, but, like the Badlands sequences, is integrated seamlessly into the serial). The apparent shootings that close Chapters Four, Five, and Ten are less interesting but respectable, while the hero’s apparent drowning in Chapter Six is quite memorable. The Chapter Eleven ending, in which co-hero Idaho is tied to tree limbs by hostile Indians and apparently ripped in half, is equally memorable, and is suspensefully intercut with shots of the heroine’s race to find help. Thankfully, few of these cliffhangers are resolved by having the good guys simply “live through it”–and those cliffhangers that are resolved in such fashion stay on the right side of the credibility line. 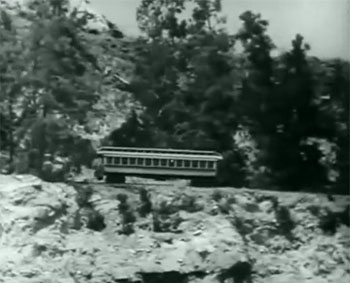 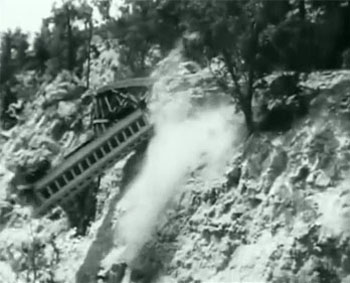 Above: A train car containing our heroes runs wild down the track (left) and plunges down a hillside (right) for the Chapter One cliffhanger. 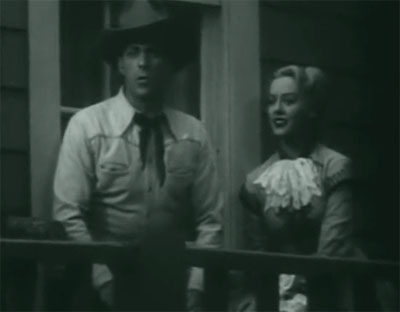 Above: Dennis Moore and Wanda McKay.

However, the serial’s most interesting protagonist is Joe Sawyer’s Idaho Jones; usually cast as a nasty thug or a comic bumbler, Sawyer takes this atypically heroic part and runs with it, giving Idaho a cheerful breeziness and a laid-back toughness that recalls Buck Jones himself at times. His lazily cagy expression as he sizes up the situation aboard the train in the first chapter, his roguish grin after he eludes the villains in Chapter Eight, and his offhanded wisecracking after Moore rescues him from the Indians in Chapter Twelve are all delightful; normally, Sawyer is one of the last actors I’d apply the adjective “cool” to, but cool he undeniably is in this outing–and very enjoyably so. 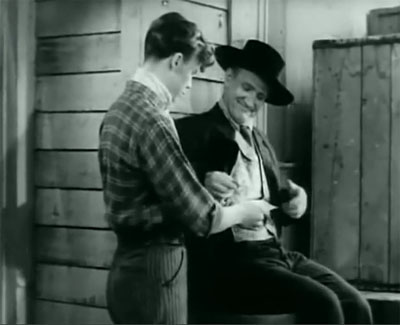 Above: Joe Sawyer slyly intercepts a telegram intended for someone else.

Lionel Atwill shares Raiders’ brains-heavy duties with Virginia Christine (as Prussian Countess Elsa Von Merck), and thus never quite seizes center stage here as he did in Captain America or Lost City of the Jungle. However, he’s still given plenty of welcome opportunities to be cold-bloodedly grim (when hatching schemes), dryly and disdainfully sarcastic (when dealing with ill-natured henchmen), and unctuously suave (when offering his “assistance” to the skeptical good guys). Christine, as the Countess, does an equally excellent job, giving her lines a slight but rather attractive Continental intonation that, along with her good looks, forms a startling contrast to her smugly ruthless–and sometimes snappishly haughty–behavior. 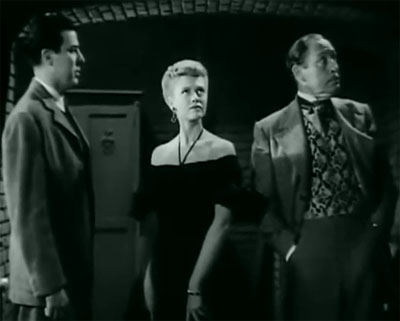 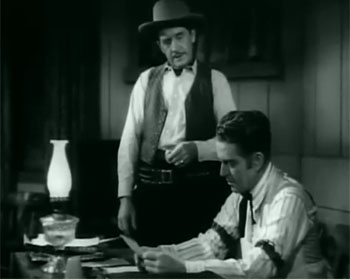 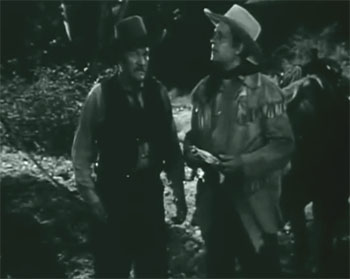 As Randolph, the honorable Confederate captain surrounded by self-seeking and treacherous allies, Regis Toomey has the serial’s most complex role; the writers don’t do as much with his intriguing character as they could have (he’s written out of the chapterplay far too early), but Toomey effectively conveys dogged determination, grim cheerfulness, pugnacity, and melancholy war-weariness in the part–even though his Pittsburgh Irish voice sounds decidedly non-Southern. His quiet sadness when he announces the surrender at Appomattox to his followers is particularly moving. 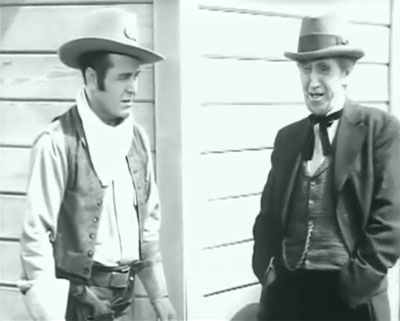 Above: Regis Toomey (left), saddened by the South’s surrender, asks a question of the jubilant Eddy Waller.

Eddy Waller is entertaining as Oro Grande’s town physician–the folksy but sly Doc Blair, who provides the heroes with help on several occasions. Ernie Adams is also great fun as the garrulous and cheerfully nosy handyman at the Wells Fargo station, while portly and avuncular Joel Friedkin is a little less boisterous but still amusingly colorful as the Wells Fargo telegrapher. Addison Richards makes the most of his periodic appearances as cavalry officer Colonel Sewell, playing the character in brusque but shrewd fashion; the bland Gene Garrick is adequate as Dennis Moore’s younger brother, a Secret Service agent who infiltrates the villains’ camp and–like most serial siblings–is killed off early in the proceedings. 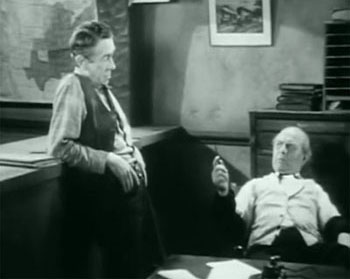 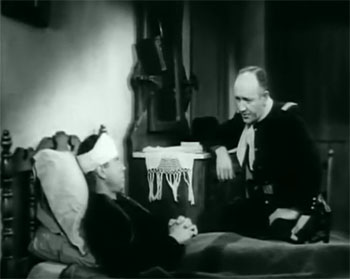 Above left: Ernie Adams (leaning on the counter) and Joel Friedkin indulge in some amiable gossiping. Above right: Addison Richards questions an injured Gene Garrick.

Charles Wagenheim, usually a furtive and uncouth rat of the underworld, is oddly cast as a suave San Francisco member of the Prussian spy ring. He sounds somewhat unconvincing exchanging urbane cat-and-mouse dialogue with the hero; slick William Ruhl, who pops up briefly as one of Wagenheim’s henchmen, would have been better-suited to the part. George Irving and Charles Miller appear (respectively) as Treasury Secretary Fessenden and War Secretary Stanton, who periodically receive reports from the hero; both actors are reasonable facsimiles of their real-life counterparts, although their authentic period hairstyles and beards look a little funny alongside the 1940s makeups of the other cast members. Robert Barron, Joe Haworth, Gene Roth, and Pierce Lyden appear as henchmen, John Cason as a saloon loafer, Dan White as a soldier, Lee Phelps as a San Francisco detective, William Forrest and Rex Lease as Army officers, and Monte Montague as a stage driver. Ray Teal has a good part in the later episodes as a sneaky outlaw assigned to stir up the Indians; Chief Thundercloud is sternly menacing as the Indian chief that Teal attempts to manipulate.

Raiders of Ghost City, like most of Universal’s post-1942 serials, is slow going at times due to its excessive talkiness–but holds interest throughout, thanks to its plotting, its superb cast, and its intermittent but admirable action scenes. These qualities, combined with the serial’s unusually strong finish, ultimately make Raiders rewarding viewing for the serial buff. 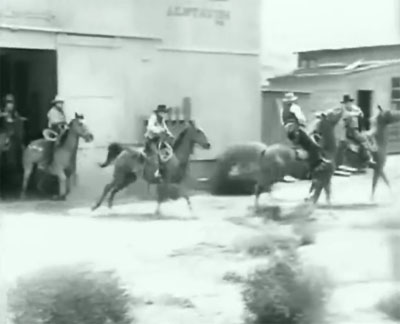 Above: The Raiders of Ghost City ride out of their ghost-town hideout.

5 thoughts on “Raiders of Ghost City”