The US government assigns scientist Joan Hughes (Jean Dean) to establish a radar station along the Mexican border–the first link in a projected nation-girdling chain of similar stations. Former OSS agent Chris Calvert (Kirk Alyn) is placed in charge of this keystone station’s security, and immediately finds himself battling the agents of notorious international spy John Baroda (John Merton)–who’s determined to delay the completion of the radar-station project until he can steal enough scientific equipment to construct a radar-neutralizing device that can be lucratively auctioned off to his foreign clients.

Radar Patrol vs. Spy King, unlike most of Republic’s other non-Western post-war serials, utilizes a familiar real-world technology (radar) as its central gimmick, rather than fantastic science-fictional devices. As a result, the serial is less far-fetched but also more bland than many of its Republic contemporaries; unlike the rocket-suits, spaceships, or ray machines featured in said contemporaries, the radar equipment used to drive Spy King’s plot is simply too mundane to lend much color to the serial’s repetitive series of chases and fistfights. However, the radar angle (like the emphasis on aviation in many 1930s Universal serials) would probably have been more interesting to the serial’s original audience; the formerly top-secret wartime technology was both novel and topical in 1949. Writers Royal Cole, William Lively, and Sol Shor definitely exploit this topicality as often as possible in their screenplay, using the Keystone Station’s radar system to alert the heroes to the villains’ actions in chapter after chapter.

Spy King’s lack of fantastic trappings is not really a flaw, but the essentially unsuspenseful nature of its central storyline is. Unlike the schemes of the Nazi, Communist, or Martian villains in other 1940s and 1950s Republic outings, Baroda’s campaign against the radar station is not part of an enemy scheme to undermine American security; instead, it’s a mere side effect of his efforts to build a salable anti-radar device out of supplies purloined from the good guys. The supposed Spy King resultantly comes off as more of a cut-rate weapons broker than a master of espionage; depicting him as the commissioned agent of an unnamed unfriendly power would have made his thievery of radar secrets, his sabotage of radar defenses, and his work on the radar-blocking machine seem like more of a genuine threat to the United States. As it is, since we never even see the foreign emissaries that Baroda hopes to sell his invention to, it’s hard to get too worried about the prospect of his eventual success.

Above: John Merton prepares to demonstrate his anti-radar contraption.

Spy King’s narrative is in other respects par for the late-Republic course; kidnappings, tussles over shipments of radar equipment, the villains’ assault on the radar station’s power sources, the heroes’ attempt to track the villains’ fuel sources, and other mini-subplots provide plentiful (albeit repetitious) action. Said action is handled in predictable but capable style by director Fred C. Brannon, leading stuntmen Dale Van Sickel and Tom Steele, and other practiced purveyors of Republic-style fisticuffs; Steele doubles for hero Kirk Alyn and Van Sickel for action heavy Anthony Warde in most of the serial’s fights, although the two exchange “roles” at least once. Van Sickel and Dave Sharpe both double sidekick George J. Lewis at different times, while Eddie Parker figures in multiple combats; Ken Terrell, Bud Wolfe, John Daheim, Bert LeBaron, Duke Taylor, and Carey Loftin all participate in at least one fight apiece as various minor thugs. The Chapter One fight outside the radar station is one of the serial’s better brawls; the three-pronged battle (two hand-to-hand fights and a gunfight) in the same location in Chapter Two is also good. Other highlights include the Chapter Three fight at the laundry, the Chapter Four fight by the truck, the short Chapter Five office fight and the longer ensuing shootout, and the pair of fistfights (at a power station and a chemical lab) in Chapter Eleven.

Above left: A shot from the Chapter Two radar-station clash; hero and henchman duke it out in the background, while heroine and henchwoman grapple in the foreground. Above right: Tom Steele flips Dave Sharpe through the air during the Chapter Three laundry fight.

Kirk Alyn’s aerial encounter with Baroda’s interesting bomb-gun in Chapter Four is good too, as is the Chapter Eleven shootout on Republic’s (strategically refurbished) Western-town street–which fits in quite well with the serial’s supposed southwestern-border setting. This shootout is one of several welcome outdoor sequences; the above-mentioned fight by the truck, the Chapter Seven fight by the utility tower, and several car chases are also staged in the open air (mostly at Iverson’s Ranch, which gets more exposure here than in many of Republic’s other latter-day G-man serials). Baroda’s mobile bomber-plane hideout provides the serial with a different kind of visual interest, making a more colorful villainous lair than the offices utilized in other serials of the period and providing a good setting for the serial’s exciting climactic scene–which has the trapped hero battling the Baroda gang in the airborne bomber as the plane’s open door (which is emphasized by the camera angles) gapes at his back. 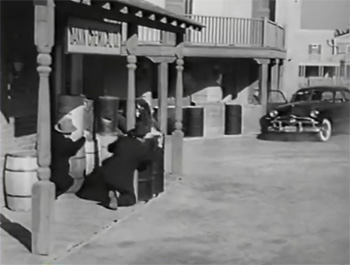 Above left: Henchmen open fire as the hero darts from his car to cover, at the beginning of the Chapter Eleven street shootout. Above right: Baroda’s bomber (a good Lydecker miniature) takes off for a climactic showdown.

Almost all of Spy King’s chapter endings, as well as a few pieces of in-chapter action like the Chapter Eight car chase (derived from King of the Texas Rangers), will be recognizable to Republic buffs as stock footage from King of the Mounties (the truck-transformer collision) G-Men vs. the Black Dragon (the paint-factory and utility-tower explosions), Captain America (the farmhouse explosion), Federal Operator 99 (the runaway laundry basket), and several other serials–but are integrated so smoothly with the new footage that they’re imperceptible to anyone who’s not trying to spot the insertions. The best of the serial’s scattered handful of original cliffhangers is the Chapter One ending, which has the hero’s car crashing into a building and triggering a small but brand-new Lydecker Brothers miniature explosion.

Kirk Alyn plays his starring role with suitable authoritativeness and likable joviality; although he’s given none of the amusing quips that marked his two earlier Republic serial roles (in Daughter of Don Q and Federal Agents vs. Underworld Inc.), he still manages to brings some of his characteristic effervescence to his by-the-numbers dialogue. Former Vargas model Jean Dean (her beauty somewhat deemphasized by long coats and baggy lab smocks) manages to be surprisingly believable as a scientist, delivering her explanations of the radar system with confident assurance–but maintaining a low-key cheerfulness that keeps her from sounding at all self-important. 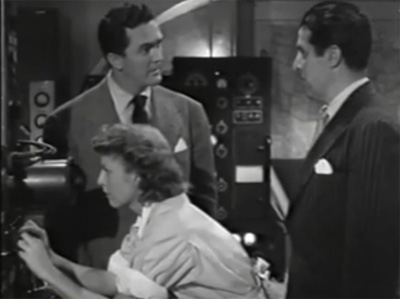 Above: Jean Dean tracks a suspicious plane on the radar, while Kirk Alyn tells George J. Lewis to have the aircraft intercepted

The dependable George J. Lewis, though given prominent billing, has very little to do as Alyn and Dean’s aide Lt. Agura (of the Mexican Border Patrol); he participates in a couple of fights, but is generally left to “hold the fort” whenever the hero and heroine leave the radar station on investigative forays. Lewis’ brusquely serious manner and his rather dryly disgusted attitude towards the villains (as in his comments after an all-night chase in Chapter Nine) provides an amusing contrast to Alyn’s exuberance, however.

Anthony Warde, as Baroda’s henchman Ricco, is as smug, snarly, and sarcastic as in his other serials, continually veering between harsh-voiced gloating (“You got here just in time to see your friend splattered all over the countryside!”) and equally harsh irritation. Warde’s Ricco is abetted in most of his evildoing by henchwoman Nitra, who’s very well-played by Eve Whitney (like heroine Dean, a former magazine model). Slinkily attractive in appearance and convincingly hard-boiled in demeanor, she handles her part with considerable flair–cynically criticizing Baroda’s plans, glaring threateningly when angered, and grinning in exultantly wicked fashion when pleased. 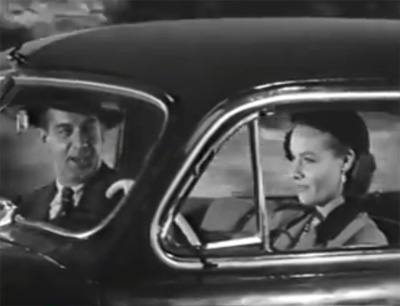 Above: Anthony Warde and Eve Whitney congratulate themselves.

Although the writers (as aforementioned) fail to make Baroda as threatening as he could have been, John Merton still establishes a menacing presence in the role–delivering his lines in a ferocious hiss, cagily and confidently outlining his plans, and giving his character a general air of ruthless arrogance. He also affects a precise enunciation that makes his voice sound less American and more “foreign” than usual; his foreignness is augmented by his bushy moustache and rounded glasses, which give him a strong (and probably intentional) resemblance to Stalin’s lackey Vyacheslav Molotov.

Tristram Coffin is his usual polished self in his occasional scenes as the protagonists’ Washington-based superior. John Crawford has a one-episode showcase as a fugitive henchman, Harold Goodwin plays a power-station employee in another chapter, Stephen Gregory is the pilot of Baroda’s plane, and Forbes Murray pops up in the final episode as one of the officials witnessing the test of the radar system. Frank O’Connor (who seems to have had a bit in nearly every one of Republic’s post-war serials) is another of the officials; most of the serial’s other speaking parts are filled by the stuntmen, with Eddie Parker playing an unnamed but recurring henchman in the serial’s first seven episodes and thus receiving the most screen time. Roy Barcroft’s voice may be briefly heard broadcasting a police alert in Chapter Three.

Radar Patrol vs. Spy King’s action scenes, cast, and good production values make it pleasant and worthwhile viewing. However, the serial still ranks as one of Republic’s less interesting later efforts, largely due to the essentially unimpressive nature of its titular villain’s master plan. 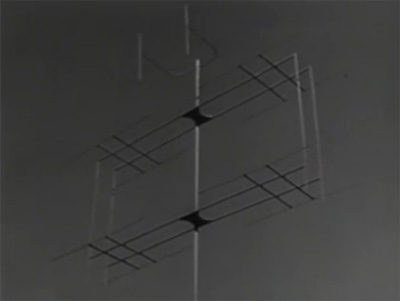 Above: One of the serial’s omnipresent radar antennas.