J. B. Dawson (I. Stanford Jolley), a unscrupulous speculator newly arrived from the East, recruits a gang of Western badmen to help him acquire some valuable oil land. The current owners of this land are a group of ranchers who have pooled all their available funds and used them to purchase a lease on the oil-bearing property; they’ll be able to buy the land outright if they can strike oil before their lease expires. Dawson hopes to buy the land for himself once the ranchers lose their lease, so he sets out to prevent such a strike; to that end, he has his outlaw associates launch repeated attacks against the ranchers’ oil-drilling project. Veteran wildcatter Colonel Arnold (Cliff Clark), the ranchers’ leader, is wheelchair-bound and unable to deal directly with this onslaught–but his right-hand man, the tough cowpuncher Ward Gordon (Richard Powers), is more than up to the challenge of fighting off Dawson’s desperadoes.

Desperadoes of the West is distinguished from Republic’s other post-war Western serials by its use of an “ordinary” cowboy (instead of Jesse James, Zorro, or a pseudo-Zorro like Don Daredevil) as a hero–but it hews closely to formula in other respects. Writer Ronald Davidson trots out Republic’s standard “finish-the-project-before-the-deadline” plot, and uses a series of repetitive duels between heroes and villains (over the heroes’ supply wagons, drilling equipment, and so forth) to make said plot last for twelve episodes. Still, despite this repetitiveness and an uncharacteristically weak climactic scene, the script for Desperadoes ranks as one of Davidson’s better solo serial screenplays; its central plotline is not too grandiose for Republic’s limited 1950s budgets, but does present stakes that are high enough to make the action reasonably interesting. The script is also helped by the streamlined episode runtimes common to all Republic’s post-war serials; with each chapter clocking in at a mere thirteen minutes, the narrative repetition never really becomes tedious.

Above: Roy Barcroft tosses dynamite onto the oft-destroyed platform of the oil derrick.

Desperadoes, like all of its contemporaries, utilizes plenty of stock footage from earlier Republic productions–but only a few scenes are borrowed from previous Republic serials; the majority of the recycled shots derive from the studio’s enormous library of B-western features, which makes Desperadoes’ non-original action scenes look fresher and less familiar than those in other serials of the period (most of which relied principally on one or two older chapterplays for their stock footage). Director Fred Brannon, cinematographer John MacBurnie, and editors Cliff Bell and Sam Starr combine Desperadoes’ wide assortment of old footage with the serial’s new scenes in admirably seamless fashion; only costume changes by the heroes and villains alert the viewer to the presence of stock. B-western buffs will notice hero Richard Powers wearing the screen outfits of cowboy stars Bill Elliott, Allan Lane, Sunset Carson, and Bob Livingston (among others) in different scenes; these getups are basically similar enough to make the switches unobtrusive–save for Sammy Baugh’s rather gaudy Tom-Mix-inspired outfit from King of the Texas Rangers, which makes Powers look decidedly silly when he (briefly) dons it for one of Desperadoes’ few serial-derived stock-footage sequences. 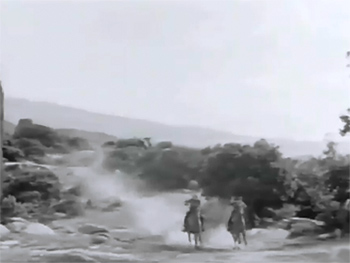 Above: Heroes (left) pursue villains (right) through a rocky portion of Iverson’s ranch, in footage that’s probably recycled from an earlier source, but could be brand-new for all the traces its insertion leaves.

The visual smoothness of Desperadoes’ footage mixture is aided by the fact that its innumerable old outdoor scenes (shot at Iverson’s Ranch) are complemented by equally copious amounts of new outdoor scenes (also shot at Iverson’s); except for the closeups of the heroes and villains when they’re seated atop moving stages or wagons, there’s no process-screen work to be seen in the serial’s many open-air chases and gun battles. Iverson’s isn’t Desperadoes’ only good outdoor location: the large camp around the heroes’ oil derrick (which is either the genuine article or a convincing full-scale mockup) also serves as the setting for several action scenes, and helps to make the serial’s whole battle-for-oil plotline seem more “real” by actually showing us the property that’s being fought over. Republic’s Western-town street provides the backdrop for yet more outdoor sequences; the well-staged gunfight on said street in Chapter Three, and the ensuing fistfight on a second-story balcony, is one of the serial’s action highlights; other highlights include the Chapter Two chase/shootout sequence, the cave shootout in Chapter Five, the horse/buckboard chase in Chapter Seven, the nighttime shootout at the oil rig in Chapter Eight, and the attack on the rig in Chapter Eleven. 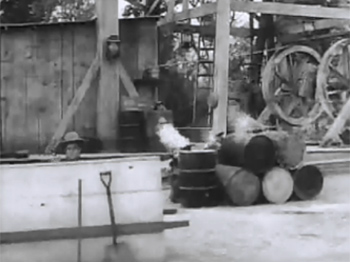 Above: The final assault on the oil rig in Chapter Twelve.

The serial’s fistfights are uniformly good–albeit rather cut-and-dried in appearance, with Tom Steele (doubling Richard Powers) and Dale Van Sickel (doubling action heavy Roy Barcroft) going through their standard paces in capable but slightly mechanical fashion. The duo are assisted by veterans Eddie Parker, Ken Terrell, and Bert LeBaron, and by comparative newcomers Johnny Daheim, Sandy Sanders, Guy Teague, and Chuck Hayward. There are a few too many brawls set inside the same saloon (although not as many as in the next year’s Don Daredevil Rides Again); the best of these barroom fights is the lengthy one in Chapter Three, with Steele taking on Sanders; Daheim’s shorter saloon clash with Steele in Chapter Five is good as well (in both cases, having Steele mix it up with someone other than Van Sickel gives a slightly more novel look to the fight). The Chapter Seven cave fight (Steele vs. Van Sickel) and the Chapter Eleven fight at the oil field (Steele vs. Van Sickel and Terrell) are also quite strong, as is the above-mentioned balcony fight in Chapter Three (Steele vs. Van Sickel again). 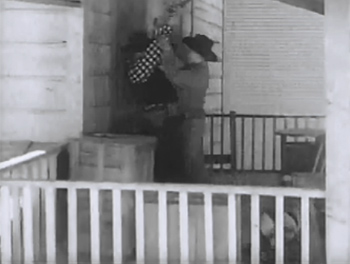 Desperadoes features several stock-footage chapter endings (the cliff fall from King of the Texas Rangers, the derrick collapse from The Tiger Woman), but also boasts several new cliffhangers, most of which are small-scaled but effective. The hero’s fall from a balcony into a blazing wagon at the end of Chapter Three is the most impressive-looking of the lot, but the Chapter Eleven cliffhanger–with the unconscious hero about to be crushed by a huge gear-wheel–is very well-done as well. The hero’s near-squashing by a crate (Chapter Five) and his apparent shooting (Chapter Six) are more mundane, but respectable; the only chapter ending that falls flat is the curious Chapter Ten one, which climaxes with the hero (wrongfully accused of blowing the villain’s safe) being arrested by the Sheriff; the situation simply isn’t dramatic enough to make the scene work as well as the similarly low-key “Eyes of the Law” sequence from Adventures of Frank and Jesse James did.

Desperadoes’ cast is unusually large by Republic’s 1950s standards; all of its players do a fine job of giving their extremely basic characters a few touches of personality. Grizzled former cowboy star Richard Powers (known in his leading-man days as Tom Keene) shows little of the cheerful brashness that characterized his heroic turns in his 1930s B-westerns for RKO, but manages to seem good-natured and easygoing when he’s not gruffly barking at the villains; he also gets to display some entertaining shrewdness (as in his deadpan parleying with the prospector Hardrock) and comes off as convincingly tough and athletic despite being in his mid-fifties (his doubling by the taller and thinner Tom Steele in the fights is rather noticeable, but he appears to do all of his own riding scenes).

Pretty Judy Clark, who seems much more comfortable in dialogue scenes here than in her earlier serial outing (Columbia’s Bruce Gentry) plays Colonel Arnold’s daughter and makes an appealing heroine, balancing a sweetly demure appearance with a spunkily enthusiastic line delivery. The chunky, gray-haired Lee Phelps is hot-headedly outspoken, quietly jovial, and roguish by turns as the hero’s sidekick Rusty; he shows much more personality than younger second leads like James Dale or House Peters Jr. in other late Republic serials (particularly in the funny poker-money scene in Chapter Three). Cliff Clark–who played doggedly grumpy cops in a zillion B-mysteries for MGM, RKO, and other studios–has little to do as the crippled Colonel Arnold, but comes off as feisty, thoughtful, and frustrated in his recurring scenes.

I. Stanford Jolley is at his colorfully slick best as the conniving Dawson, using his rich voice to good advantage as he authoritatively explains his schemes to his henchmen or smoothly offers to buy out the beleaguered ranchers; his brazen smugness in his repeated interchanges with Powers (who suspects him almost from the beginning, but can’t prove anything) is particularly enjoyable. Roy Barcroft is also fun to watch as the wily and wryly sarcastic action heavy Hacker–who’s more of a co-villain than a henchman, and frequently criticizes Dawson’s schemes; Barcroft’s characteristic toughness plays well off of Jolley’s sleekness. The stocky, harsh-voiced and exeedingly cranky-looking Lee Roberts, in one of his few non-Columbia serials, is very effective as secondary action heavy Larsen; Dale Van Sickel is also good in an unusually large role as a slippery customer named Reed, who serves as the villains’ saloon-based spy in the serial’s first half.

Above: Roy Barcroft and I. Stanford Jolley.

The wonderful character actor Hank Patterson lends his pleasingly quirky presence to one episode as the crusty but likable prospector Hardrock, whose property becomes a bone of contention. Veterans Edmund Cobb and George Chesebro both have good bits as henchmen; Cobb gets to impersonate an oil driller and cholerically tries to bluff his way out of difficulties, while Chesebro poses as a stage driver and delivers a fictitious account of a holdup with his usual garrulous energy. Mauritz Hugo appears briefly as another henchman, while John Cason gets to play a good guy role for a change, appearing throughout the serial as the genial work-crew foreman at the oil drill. Stanley Blystone is a tough storekeeper, Bud Osborne a stage driver, Holly Bane (aka Mike Ragan) a rowdy and ill-fated oil-driller, and Harold Goodwin the Sheriff. Johnny Daheim plays a good guy posing as a bad one, while the serial’s other stunt team members pop up as thugs (Sandy Sanders, as a very belligerent saloon agitator, being the most memorable). Fred Kohler Jr. appears as a treacherous oil-well foreman, while Dennis Moore and Jack Ingram play two of the men under him; all their footage is lifted from Republic’s 1942 B-western Raiders of the Range–but, like the serial’s other stock-footage scenes, is inserted so smoothly that only the presence of Moore (whose actual serial roles were always much larger) tips the viewer off to the borrowing.

Desperadoes of the West is nothing special when it comes to plotting, but is engagingly acted, fast-paced, and full of action–which makes it very watchable. It also never looks or feels “cheap,” unlike several other 1950s Republics; its extensive outdoor shooting, generous amount of supplementary characters (both good and bad), and its skillful deployment of stock footage gives it all the production value its modest Western storyline requires. 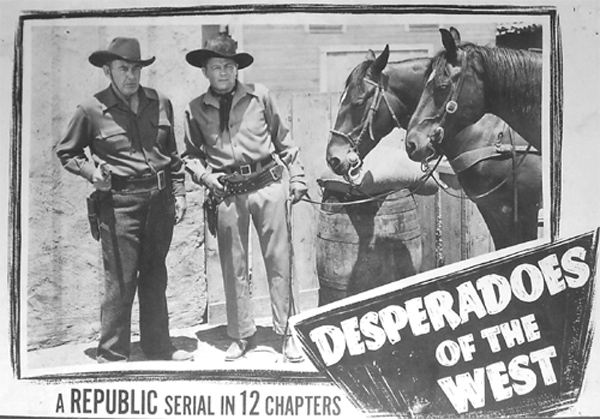 Above: Lee Phelps and Richard Powers prepare for action.

4 thoughts on “Desperadoes of the West”