A special train carrying a shipment of gold from the Galconda Mine is hijacked by a gang of crooks–who remove the gold and use a specially-laid section of track to run the train down an abandoned mine shaft, afterwards removing the temporary track so as to leave no connecting link between the main rail line and the disused spur leading to the mine. Potter Hood (Francis Ford), the president of the Galconda mining company, believes the baffling robbery was engineered by railroad owner Horace Moore (Frank Beal)–but the mastermind behind the theft is actually Hood’s scheming vice-president Samuel Slater (J. Frank Glendon). Slater’s schemes are hampered, however, when Hood’s son Tom (Frank Albertson) and his college buddy Bob Collins (Ernie Nevers) decide to turn detective and track down The Lost Special, teaming up with aspiring reporter Betty Moore (Cecilia Parker) and her friend Kate Bland (Caryl Lincoln). Together, the four youngsters set out to investigate the Special’s disappearance—searching for the stolen gold, battling Slater’s gang, preventing additional robberies, and drawing ever closer to unmasking Slater himself.

As the opening credits duly emphasize, The Lost Special is based on a story by Sir Arthur Conan Doyle–albeit very loosely. Its only borrowings from its proclaimed source are its title, the ingenious method of hiding the train in the first chapter, and several character names–Slater, Collins, Bland, Horace Moore, Potter Hood; only the last-named character has any similarity to his print counterpart. The rest of the serial is the work of Universal screenwriters George Morgan, Ella O’Neill, George Plympton, and Basil Dickey, and has more in common with the Hardy Boys stories of the late 1920s and early 1930s than anything Sir Arthur wrote. The preceding statement is not intended as a criticism; Special is a straightforward and very enjoyable tale of two-fisted detection that’s far livelier than some of Universal’s other outings from the first half of the 1930s.

Like the protagonists of the Hardy books, and other juvenile mysteries of the era, Lost Special’s heroes are cheerfully but resolutely focused on their fight with their criminal opponents—unlike the protagonists of other early Universal serials like Perils of Pauline or Tailspin Tommy, for whom clashes with villains were distractions from other pursuits like archeology or aviation. This firm emphasis on crime-fighting makes Special seem a little repetitive at times–but also makes it exciting and fast-moving, with good guys and bad guys hurrying from one encounter to the next in a style more reminiscent of later Republic serials than of contemporary Universal outings. The pace does slow somewhat whenever the heroes or villains sit down to discuss their next move—but these plotting scenes, though sometimes overlong, are rarely dull–thanks to the energy of the leading actors and to many humorous pieces of dialogue (particularly prudent Kate Bland’s sharp-tongued objections when her more reckless friends are sketching out a campaign). 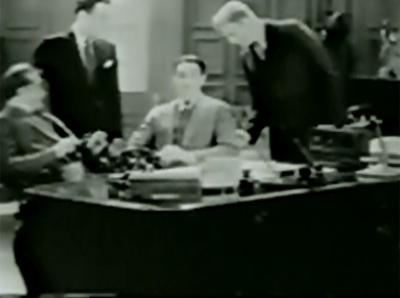 Above: A prankish Ernie Nevers (standing, right) gives secretly guilty J. Frank Glendon (seated, center) a momentary moment of panic by telling him to “stick ’em up” during an office discussion; Francis Ford (seated, left) and Frank Albertson look on in amusement.

The writers move their characters through a wide variety of locations, which helps to minimize the repetitive aspects of the ongoing battle between Tom Hood’s group and Slater’s men; protagonists and antagonists tangle with each other aboard speeding trains, on country roads, inside a nightclub, on the ocean, at a mine, and inside a huge mansion. The mansion’s interior is represented by an eerie-looking and impressive Universal studio set; the inside of the “Red Lantern,” filled with dozens of extras, is equally impressive. The gloomy outside of the mansion and the spacious grounds and marina of the nightclub (as well as the farmstead in another chapter) appear to be genuine non-backlot structures of the type often seen in Mascot serials but featured far less frequently in Universal’s efforts. Bronson Cave serves as the aforementioned mine, while Bronson Canyon and the hilly roads nearby provide the backdrop for other outdoor action sequences. 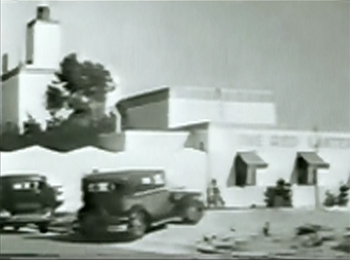 The action sequences in Special–indoor and outdoor—are more plentiful than in many other Universals of the era; although gun battles are even more noticeably deemphasized than in some of the studio’s other pre-1936 chapterplays, the serial teems with fistfights and chases. The fistfights, which feature the overcranking and the short, choppy blows typical of early-1930s screen fights, look very unconvincing when compared to those in later serials–but are still entertainingly energetic, with the heroes and the henchmen furiously flailing away at each other and emerging from the brawls in a convincing state of exhaustion and disarray. The mammoth fight between the heroes (backed by their football-team friends) and the heavies at the Red Lantern in Chapter Three is visually memorable, thanks to the way in which director Henry MacRae fills the screen with combatants; the wild battle on the mansion landing in Chapter Six is another standout, as are co-hero Ernie Nevers’s tussle with a trio of henchmen in the mansion hallway (which spans Chapters Seven and Eight) and the fight atop the train in Chapter One. The athletic Nevers—a Hall of Fame fullback for the New York Giants—seems to be doing most of his own stuntwork during the fight scenes, as does Frank Albertson (although George DeNormand subs for the latter in some sequences).

Above left: The mammoth nightclub fight. Above right: Frank Albertson sends a henchman sailing over a railing during the brawl at the mansion.

Nevers’ lengthy race down the burning staircase of a towering office building (carrying the unconscious Albertson) and Caryl Lincoln’s dangerous leap down a hillside to escape from the henchmen’s car are excellent as well; other action highlights include the car-train chase in Chapter Two, the Chapter Three boat chase, the fight at the farmhouse porch in Chapter Nine and the car-motorcycle chase that follows it–which climaxes with both car and cycle soaring off a cliff for a spectacular chapter ending. Other cliffhanger scenes are similarly memorable–particularly the car-train collision in Chapter One, the collapsing building in Chapter Four, and the tunnel blast in Chapter Eleven. The only jarringly obvious use of stock-footage peril comes in the Chapter Eleven forest-fire scene, although many of the aforementioned chapter endings (and others like the motorboat explosion or the trapdoor fall) suffer from that chronic Universal flaw—the improbable “they-lived-through-it” escape. The flooding-room cliffhanger in Chapter Seven is the best of the lot, being both effectively executed and effectively resolved. 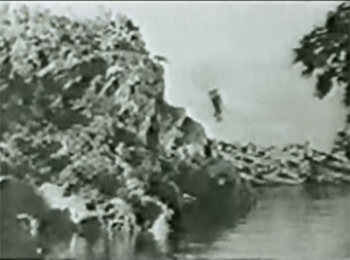 Above left: The heroine’s speeding car heads for a collision with a speeding train. Above right: A car sails off the cliff at the end of Chapter Nine, with a motorcycle close behind it.

Frank Albertson, who went on to play major roles in classic comedies like Bachelor Mother and the Marx Brothers’ Room Service, is excellent  as Tom Hood—rattling off plans in chipper and eager fashion and managing to convey both self-assured savvy and youthful overconfidence without seeming either obnoxious or foolish. Co-hero Ernie Nevers’ extremely subdued manner provides a good contrast to Albertson’s breeziness; although the big fullback’s acting inexperience is quite obvious whenever his lines get too long-winded (his explanation of transmutation in Chapter Four is particularly painful), he handles less demanding dialogue with an easygoing affability that’s very likable—and seems quite at home in the action scenes. 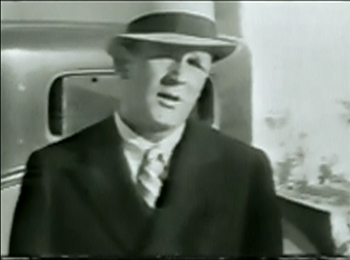 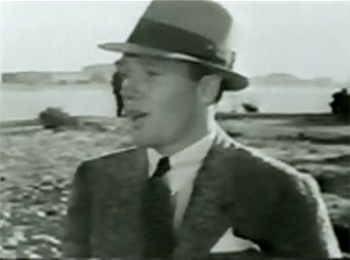 Cecilia Parker’s reporter heroine Betty—who repeatedly and unconcernedly rushes into danger– is even more cheerfully reckless than Albertson’s Tom, but similarly manages to come off as endearing instead of irritating; the actress’s demure and angelic appearance provides an amusing contrast to her breathless eagerness and her character’s unconcernedly imprudent behavior. The attractive Caryl Lincoln is very good as Parker’s sensible but seldom-heeded friend Kate; although she has less to do than Albertson, Nevers, and Parker, she receives some of the serial’s best lines. Her sarcastic remarks after Betty has crashed the girls’ car into a train are particularly funny (Betty: “Kate, I’m so glad you weren’t killed!”  Kate: “Well, you did your best, but I’m still here.”)

Above left: Cecilia Parker cogitates. Above right: Caryl Lincoln urges a harbor-police officer on to the rescue of her friends.

Silent-serial star Francis Ford turns in a colorful and individualized performance as Potter Hood; like most serial parents, he’s soberly dignified when worrying over the dangers his son is encountering, but is also amusingly irascible when browbeating his supposed enemy Horace Moore, and admirably fierce and feisty when confronting the villains. The suave and poker-faced J. Frank Glendon does an excellent job as Ford’s duplicitous associate—affecting a sort of stuffy joviality when conferring with the good guys, but switching to a far keener and slyer demeanor when plotting with his henchmen; he uses his rolling, euphonious voice to great advantage in both aspects of his brains-heavy role.

Tom London is very good as action heavy Dirk—seeming shrewd and crafty enough to direct the lesser henchmen but also nervous enough to require the guidance of Glendon’s character. Al Ferguson is colorfully cocky and swaggering as Gavin, one of the principal subordinate thugs, while Jack Clifford is sinisterly suave as Doran, another leading heavy. Edmund Cobb is featured prominently throughout as a cranky goon named Spike, and engages in some hilarious (and uncharacteristic) antics with a bottle of liquor in Chapter Eleven. Stuntmen George DeNormand and George Magrill have lesser henchman roles, as do Bud Osborne and silent-serial star (and champion strongman) Joe Bonomo. Harold Nelson is distinctively quirky as a rather Dickensian professor in cahoots with the criminals, while Frank Beal is the harried but dignified railroad official Horace Moore. Reb Russell, later a star of some very low-budget B-westerns, is one of the heroes’ college chums, Harry Strang is a nightclub waiter, and William Gould is a railroad detective.

Above: Al Ferguson (left), Tom London (center), and other heavies during a motorboat chase.

Unlike almost every other Universal serial, The Lost Special has never been given a commercial video release, and as a result remains one of the studio’s most frequently overlooked outings. Although extant prints of the serial are rather hazy-looking in places (and are also missing about five minutes worth of footage from Chapter Five), they’re well worth seeking out; Special’s simple but exuberantly energetic script, colorful assortment of action scenes, and equally colorful assortment of actors makes it very entertaining viewing.

Above: The Lost Special rolls down the abandoned mine in Chapter One.

3 thoughts on “The Lost Special”