The citizens of a Western ranching community suddenly find themselves dispossessed when an old Spanish land grant–under which they hold title to their ranches–is re-examined at the instigation of local attorney/politician Douglas Stratton (Roy Barcroft) and legally declared a forgery. Now, their property is free land and belongs to the first homesteader who stakes a claim on it–and the land-grabbing Stratton is already planning to have his henchmen stake out as much valuable territory as they can. However, lawyer Lee Hadley ((Ken Curtis) manages to file a claim on his cousin Patricia Doyle’s (Aline Towne) property before Stratton’s agents can, and encourages the other ranchers to do the same. To maintain title to their new “claims,” they must remain on the property for a year–but Stratton is determined to make sure none of them stick around that long, and has his followers launch a reign of terror in hopes of driving off the ranchers. With the Sheriff in Stratton’s pocket, Hadley finds legal remedies useless, and instead decides to follow the example of his grandfather–who once combated outlawry as the masked avenger “Don Daredevil.” As the resurrected don, Hadley fights to protect his friends and neighbors from Stratton’s gang, while also endeavoring to prove that Stratton engineered the whole free-land situation by substituting a forgery for the original Spanish grant.

Don Daredevil Rides Again is in most regards a typical late Republic serial; though full of stock footage and repetitiously plotted, its new footage is good enough and its running time short enough to make it quite enjoyable. Unlike many of its contemporaries, it also manages to successfully conceal its low budget–since, as a Western, it’s happily free from the over-ambitious sci-fi or espionage trappings of many other late Republics.

Ronald Davidson’s screenplay for Don Daredevil largely consists of a series of encounters between Don Daredevil and Stratton’s henchmen Weber and Hagen, with the masked man continually battling the heavies’ attempts to destroy the homesteaders’ property. The subplot of the forged land grant isn’t utilized as much as it could have been, although it does give rise to a brief plot detour in Chapter Five, and plays an important part in the serial’s eventual denouement. Other detours are provided by the temporary arrest of Weber, the discovery of gold on one of the endangered homesteads, the villains’ attempt to kill Lee Hadley, and the near-unmasking of Don Daredevil after Hadley is wounded; these deviations from the central storyline don’t really overcome the repetitiveness of the serial’s narrative, but they do diminish it somewhat. 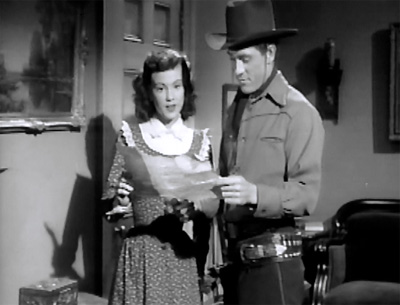 As any Republic serial buff will realize upon seeing the star’s costume, Don Daredevil derives much of its stock footage from Zorro’s Black Whip (most notably the shots of the Don riding to and from his waterfall hideout); Daredevils of the West and The Phantom Rider are represented as well. However, in typical Republic style, the borrowed shots are so smoothly combined with new ones that even a buff has to look very carefully to spot the seams. Some pieces of in-chapter action–like the attack on the wagons in the second episode or the buckboard chase in Chapter Five–draw on stock footage, but the majority of the stock shows up in the chapter endings–among them the Chapter Eight tent explosion (Whip), the Chapter Two cliff-fall (Daredevils), and the Chapter One cabin collapse (Rider). New cliffhangers are less spectacular, such as the hero’s apparent knifing at the end of Chapter Five, the pitchforking in Chapter Nine, or the shooting in Chapter Ten–although all three of these perils are resolved with above-average cleverness.

Above: Lane Bradford is about to pitchfork an unconscious Ken Curtis; the idea had been used before in Zorro’s Black Whip, but the footage is brand new.

Director Fred C. Brannon and the Republic stunt team do a solid job with the new action scenes–although the screenplay forces them to stage a rather excessive number of barroom brawls (like the oft-destroyed store in Haunted Harbor, the saloon in Don Daredevil is trashed so often by battling heroes and villains that one wonders why it just doesn’t close down). Of these saloon fights, the best and most energetically staged is the Chapter Nine one; this brawl also begins in novel fashion, with Lee Hadley cagily managing to disarm a professional gunfighter who’s trying to provoke him into a duel–and then energetically slugging it out with the killer on even terms. Tom Steele doubles the hero here (and elsewhere); Dale Van Sickel plays the gunfighter. 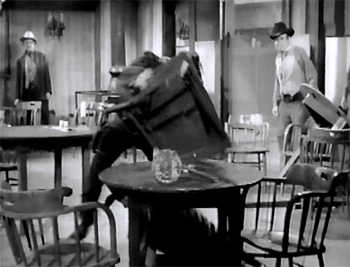 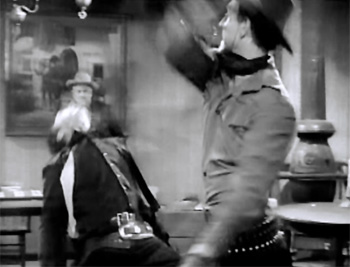 Above left: Tom Steele ducks beneath a table as Dale Van Sickel crashes a chair against it. Above right: Ken Curtis (not doubled in this shot) finishes Van Sickel off with a beautiful haymaker; both shots are from the Chapter Nine fight.

Van Sickel also doubles for secondary hero Robert Einer and for action heavy Lane Bradford; Guy Teague can also be seen doubling for Bradford in scenes that feature both the Einer and Bradford’s character–like the four-man ranch house fight in Chapter Five, which features Steele, Van Sickel, Teague, and Carey Loftin (doubling secondary henchman John Cason) all battling away. Steele’s fight with Eddie Parker (doubling Roy Barcroft) in Chapter Eleven is also memorable, while Steele’s various saloon slugfests with stuntmen Dave Sharpe, George Magrill, and Charles Horvath–though not as distinctive as the Chapter Nine one with Van Sickel–are quite respectable.

Above: Guy Teague slugs Tom Steele in the foreground, while Carey Loftin (checkered shirt) and Dale Van Sickel square off in the background.

The Chapter Three barn fight (which concludes with a brief but interesting whip-versus-axe duel), Weber and Hagen’s siege of the hero at a mine in Chapter Four, the shootout in the rocks in Chapter Seven, the gun battle between homesteaders and claim-jumpers in Chapter Eight, and the satisfying climactic shootout at the Doyle ranch are good as well.  The cliff and trails of Iverson’s Ranch provide a backdrop for almost all of the serial’s outdoor action sequences, except for scenes like the opening shootout (which, like the satisfying finale, takes place at Republic’s own backlot ranch).

Above: John Cason and Lane Bradford hunt cover at Iverson’s Ranch as Robert Einer (whose gunsmoke alone is visible here) fires at them from above.

Star Ken Curtis displays little of the exuberance that marked his later “Festus Haggen” characterization on the Gunsmoke TV show; here, he comes off as decidedly serious and subdued. Though somewhat lacking in affability, he’s still quite likable–and handles other key aspects of the hero’s role very well, conveying both grim toughness (when confronting crooks) and shrewd intelligence (in bits like the showdown with the gunfighter or in the powder-barrel scene in the final chapter). His gaunt face, thoughtful expressions, and slow drawl give him a rather Lincoln-like air at times–quite appropriate for a supposed lawyer.

Above: Ken Curtis confronts Dale Van Sickel (back to camera).

Heroine Aline Towne’s quiet cheerfulness helps to balance out Curtis’s somberness; she manages to come off as both calmly reflective and warmly earnest when joining him in discussions of strategy. Alternately clad in a riding skirt or old-fashioned dress–and wearing her hair long and flowing–she also looks lovelier here than in any of her other Republic outings (in which she was typically confined to business suits and outer-space coveralls)–although, as in most of her serials, she has fairly little to do beyond conferring with the hero. Wonderful character actor Hank Patterson, as the trusty old cowpoke Buck, makes a welcome addition to the cast of good guys; like Towne, he spends most of his screen time at the Doyle ranch, but he still enlivens many a dialogue sequence with his feisty grumblings. His urging of Hadley to take up the mantle of “ol’ Don Daredevil” in the first chapter is most enjoyable, while his confrontation with Stratton and the Sheriff in Chapter Ten is one of the serial’s best moments. 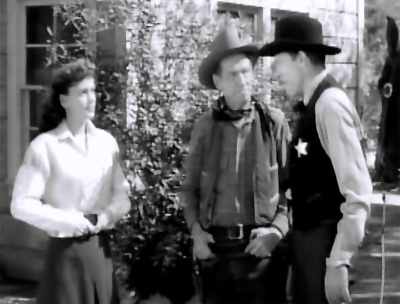 Above: Aline Towne and Hank Patterson disgustedly deal with sheriff I. Stanford Jolley.

Robert Einer plays the serial’s fourth main protagonist–young rancher Gary Taylor, who’s unaware of Don Daredevil’s identity, but does his best to assist him. Unlike most of the secondary heroes in Republic’s serials, Gary is not a stolidly dependable backup for the hero; instead, scripter Davidson writes the character as an impetous hothead, using his loose-cannon behavior to provide a convenient but unusual catalyst for much of the action (and, incidentally, furnish one of Republic’s few genuinely funny fadeout scenes). Einer’s performance in the part has been panned as “weak” by most reviewers, but I find it hard to agree with them; though he generally come off as doltish and awkward instead of heroic, such an approach seems ideally suited to the young blunderer he’s playing. He also manages to be suitably belligerent (as in his angry disputes with the heavies) and cocky (as when he confidently assures the heroine he can handle potential trouble) when the situation calls for it, but doesn’t overdo either belligerency or cockiness to an obnoxious extent.

Above: Robert Einer as the shoot-first, talk-later Gary.

Roy Barcroft is characteristically excellent as the scheming Stratton; although the part gives him no opportunities to display the phony friendliness that characterized some of his other serial brains-heavy turns, he still derives plenty of mileage from Stratton’s confident outlines of his plans, his sharp criticisms of his henchmen, and his unblushing attempts to overwhelm opponents with legal prevarications (“As an attorney, I assure you..”). As Weber and Hagen, Lane Bradford and John Cason make a first-rate henchman duo; both are intimidatingly mean and muscular, but are different enough in their screen personalities to be an interesting team; Bradford’s terse and articulate dialogue delivery and his ice-cold manner contrast nicely with Cason’s growling voice, thick Texas accent, and gruffly down-to-earth bearing.

I. Stanford Jolley makes the most of his occasional appearances as the blustering and compromised Sheriff; Forrest Taylor is also lively in his brief scene as Gary’s father (who, amusingly, seems about as imprudent as his son). Lee Phelps pops up as Uncle Michael Doyle, the holder of the disputed land grant, and Gene Roth has a good bit as the genial but gabby old rancher who dooms himself by striking gold in Chapter Seven. Mike Ragan (aka Holly Bane) makes a rare appearance on the side of a right as a homesteader, while character player George Lloyd is delightful in his turn as a shifty trader. The stunt team members all play various bits, with Dale Van Sickel easily the most memorable in his aforementioned appearance as the quietly sinister gunfighter Dan Farley. Bud Osborne and Jack Ingram both appear as shifty bartenders, and cowboy musician Cactus Mack pops up as an outlaw.

Don Daredevil Rides Again offers nothing new to the veteran serial-watcher, but makes for pleasant viewing nonetheless; it’s professionally crafted and full of likable actors–and is never hampered or embarrassed by its budget the way some of its contemporaries were. While The Invisible Monster fell short of being a sci-fi thriller, and Canadian Mounties vs. Atomic Invaders failed as a Cold War espionage adventure, Don Daredevil easily realizes its more modest goals–and succeeds as a compact and enjoyable Western chapterplay.