Daredevil aviator Dick Moreland (Richard Talmadge) returns from a record-breaking round-the-world flight to receive a substantial cash award and plan a new adventure: he hopes to use his winnings to finance a hunt for the pirate treasure that was buried long ago on a tropical isle by his ancestor Sir John Moreland. Dick confides this ambition to his friends at the Aero Club and tells them of the existence of a treasure map that’s been handed down in the Moreland family–whereupon a shady new club member, lawyer Staley Brasset (Walter Miller), sends a gang of thugs to steal the map. However, while the gang repeatedly manages to purloin the parchment, Dick manages to recover it just as repeatedly–all the while planning his treasure-hunting expedition with the help of fellow club member John Craig (Pat O’Malley) and Craig’s daughter Dorothy (Lucille Lund). Eventually, Moreland, the Craigs, and the unsuspected Brasset set sail for the treasure island aboard the Lottie Carson–with several untrustworthy sailors and stowaway henchmen tagging along to continue the struggle over the Pirate Treasure.

Pirate Treasure’s star Richard Talmadge was one of Hollywood’s earliest and greatest stuntmen, a former circus acrobat who had doubled for Douglas Fairbanks before starring in many action films of his own during the 1920s. His limited acting skills, German accent and advancing age ended his leading-man career in the sound era and sent him into a new career as a second-unit director, but not before he played several heroic roles in low-budget 1930s adventure features–and the serial under discussion. Like Talmadge’s other sound vehicles, Pirate Treasure plays to its star’s strengths, deemphasizing dialogue scenes in favor of situations that allow him to display his tremendous acrobatic skill. The result is a highly enjoyable serial that differs noticeably from most of its early-1930s Universal contemporaries: its plotting is thinner and its characters more basic than the studio’s norm, but its pacing and its action scenes are far above said norm. 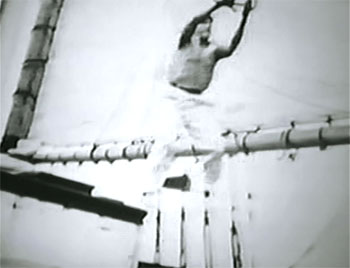 Above left: Talmadge leaps from a ship’s deck to grab a hanging rope. Above right: Talmadge flips himself over a horizontal rope to dodge two henchmen.

Jack Nelson, Basil Dickey, and George Plympton handle Pirate Treasure’s script, with Dickey and Plympton’s frequent collaborator Ella O’Neill receiving an “original story” credit. Almost the entire first half of the screenplay focuses on the battle for the treasure map, with hero and villains chasing each other to and fro in pursuit of the coveted document–which changes hands at a very rapid rate. The writers don’t actually get the hero’s treasure hunt underway until the middle of Chapter Seven–after which the narrative becomes more sequential, with the good guys thwarting a villainous attempt to take over their ship en route, before landing on the island and continuing to fight off the villains as they slowly draw closer to the buried treasure.

Although repetitious, the serial’s first half is never boring, with the back-and-forth fight over the treasure map giving rise to a succession of exhilarating action scenes. In fact, the serial’s later chapters are far weaker in this department than the earlier ones; although the shipboard action is first-rate, the hero-villain confrontations on the island in the final four episodes are not as distinctive or entertaining as the ones in the serial’s first two-thirds. As in so many Universal outings, the final chapter is a particular disappointment, wrapping things up with a minimum of action. The climax, however, does serve a narrative purpose–highlighting as it does an important moral difference between our rival teams of treasure hunters.

The last episode isn’t disappointing enough to diminish the tremendous appeal that the serial derives from its action scenes–some of the best sequences of their kind in any Universal chapterplay. Ray Taylor directs them with his usual competency, but it was undoubtedly Talmadge himself who worked out the details of the elaborate stunt sequences. The star expectedly performs many of his own leaps and vaults, although George DeNormand doubles him for some of the more dangerous feats of derring-do. Talmadge’s brothers and fellow-acrobats Victor and Otto Metz (his own real name was Sylvester Metz) also help out in the stunt sequences, frequently doubling for the heavies during the chases and fights; DeNormand and fellow-stuntman George Magrill, who play henchmen, also slug it out with Talmadge in several scenes.

Above: Shots from the rooftop chase in Chapter Two.

One of the serial’s action highlights is the lengthy Chapter Two sequence (partially pictured above) that begins with Talmadge’s climb to the top of a multi-story building, continues with his leap through a skylight to grab the map, and segues into an incredible rooftop chase that has our hero running up stairs, sliding down wires, leaping over chasms, springing over obstacles, and generally defying the laws of gravity. The Chapter Eight shipboard fight is equally terrific, with Talmadge swinging on ropes, climbing on the rigging, and leaping around the deck like a kangaroo. Other standouts include the wild car chase in Chapter Seven and the car-motorcycle-train chase sequence that bridges Chapters Three and Four (during which Talmadge crashes his cycle against a highway bridge railing and soars over the edge, landing on the roof of a flatcar passing beneath). 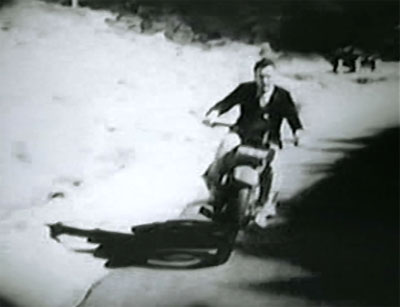 Above: The motorcycle chase in Chapter Four.

The serial’s fistfight scenes are less striking than Talmadge’s acrobatics or the vehicular chases; hand-to-hand combats are performed with much energy but little precision, with the participants violently flailing away with their fists yet rarely managing to land a convincing-looking blow. That said, sequences like the battle in the runaway motorboat in Chapter Four, the cliff-side fight in Chapter Nine, and the lengthy jungle brawl in Chapter Eleven (which takes Talmadge and two heavies into a grimy swamp) are still enjoyably lively, albeit decidedly chaotic. The one-on-one dock fight between Talmadge and henchman Al Ferguson in Chapter Six is the best of the serial’s fights, however; due to the minimal number of combatants, it’s more carefully staged and less clumsy-looking than many of the other brawls.

Above: Ethan Laidlaw (left) and Talmadge swing away during the swamp fight.

The serial’s chapter endings are good ones, with most of the perils (like the plunge off the dock in Chapter One or the fall from the rigging in Chapter Five) being threatening but modest enough to make the hero’s survival of them seem less unbelievable than in many other Universals; Talmadge’s rubber-ball-like resiliency also helps make his continual survival seem a bit more credible. However, the resolution to his cliff fall at the end of Chapter Nine is utterly outrageous and unbelievable, even by Universal standards; much more satisfactory is the resolution of the Chapter Two roof-fall cliffhanger, which allows the hero to make a spectacular but believable escape from seemingly certain death. 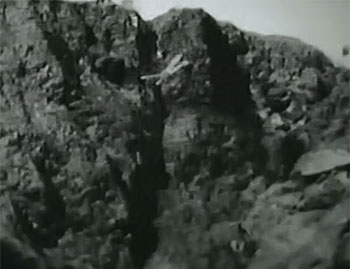 Above: The conclusions to Chapters Two (left) and Nine (right).

The roads near Bronson Canyon–looking remarkably rustic at this point in time–provide the backdrop for the various car chases, while one of the walls of the Canyon itself figures briefly as the aforementioned cliff that the hero plunges from in Chapter Nine. Universal’s first-rate backlot sets–their full-size sailing ship, their city streets, and their excellent backlot “jungle” with its thickets and rock formations—effectively round out the serial’s locations.

While Richard Talmadge’s stuntwork is undeniably more polished than his acting, his lead performance is still an extremely likable one. His dialogue delivery is occasionally clumsy—due in part to his mild but noticeable accent—but is always sincere; he brings both earnestness and a complete and winning lack of self-consciousness to his part. He performs his death-defying feats with quiet solemnity, is calmly and convincingly self-effacing when complimented on his heroism, and combines chipper enthusiasm with an unusually polite demeanor that’s both amusing and endearing; other serial heroes would sound cheerfully facetious when saying “sorry, old timer, but I had to knock you cold” to an unconscious henchman, but Talmadge is so gentlemanly in manner that it comes off as an honest apology.

Above: Talmadge (center) explains his treasure-hunting ambitions to his fellow Aero Club members.

Blonde beauty Lucille Lund is boundlessly cheerful and almost bubbly as the heroine—happily shrugging off real and potential dangers and exuberantly rhapsodizing about the sheer thrill of going after pirate treasure; although she comes off as a little irresponsible at times, she’s very appealing throughout. Pat O’Malley is much more sober as her father, but is still unusually energetic for a serial parent; though dignified and authoritative, he gives a bit of adventurous dash to his character that makes his frequent participation in the action quite convincing. 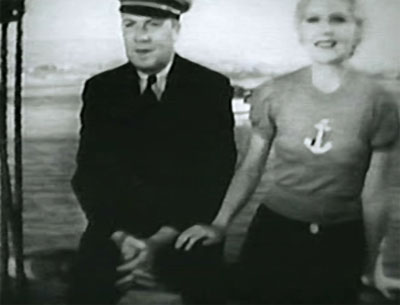 Above: Pat O’Malley and Lucille Lund.

Walter Miller has almost nothing to do in the serial’s first half besides give orders to his henchmen and occasionally chat with Talmadge at the Aero Club—but performs both duties with his usual skill, brusquely rapping out orders when closeted with his followers and adopting a suave man-of-the-world pose when deceiving the hero. He’s given greater scope for both his villainy and his hypocrisy in the later chapters, and handles the increased screen time with the same flair. The extremely tough-looking Ethan Laidlaw is also excellent as his principal henchman Curt– confronting the hero with vicious aggressiveness, snarling and snapping belligerently at his underlings, and making the gruff Miller look like a diplomat by comparison. 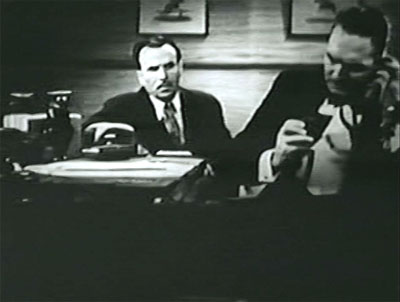 Above: Ethan Laidlaw watches as Walter Miller contacts other thugs via radio.

William Desmond is very good as the courageous and pugnacious Captain Carson, his kindly but slightly blustery demeanor admirably suited to the part of an old salt. Edmund Cobb has a fair-sized role as one of his crewmen, while the dignified and deep-voiced William L. Thorne plays a treacherous ship’s mate.  Crafty Al Ferguson and noisy Monte Montague are the most prominent of the supporting henchmen; Del Lawrence is the hero’s affable uncle, and Philo McCullough has a good time as the swashbuckling Sir John Moreland in the flashback sequence in the first chapter. Harry Tenbrook and George Magrill are background henchman, Beulah Hutton a female crook, and Frank Ellis a villainous sailor; George DeNormand pops up both as a thug and a non-villainous seaman.

Victor and Otto Metz also play sailors, while Francis Ford has a small role as one of Moreland’s friends in the first chapter. A group of swarthy and indeterminately exotic-looking extras play the semi-friendly natives of the treasure island—conversing entirely in Spanish. Despite some reviewers’ comments on the supposed ludicrousness of this language choice, the use of Spanish actually makes geographic sense; the isle is supposed to be located on the “old Spanish Main” (the Caribbean), where it would be quite possible to find Spanish-speaking Amerindian islanders. However, the jarring use of stock footage from Universal’s adventure film Nagana—which surfaces whenever the natives are war-dancing or drum-beating and temporarily turns the apparent Indians into black Africans —definitely damages this Caribbean aura.

Pirate Treasure’s score, like that of most early sound serials, is fairly sparse, with shouts and dubbed-in exclamations accompanying the action scenes instead of music cues (“So! You will have it, will you!” “I’ll get you this time, Moreland!”). However, the serial’s opening theme—which pops up at occasional points within the chapterplay—is a memorable and enjoyable one, an arrangement that unites “Yo Ho Ho and a Bottle of Rum” and “Sailing, Sailing” in a rollicking piece that’s ideally suited to the serial.

Pirate Treasure is somewhat rough around the edges, but is an enormously entertaining serial overall. Its spirited cast, the impressive exertions of its stuntman-star, and the archetypal appeal of its plot elements (the treasure map, the dangerous voyage, the mutinous crew, the buried chest) make it great fun to watch; as Richard Talmadge puts it in Chapter Seven, “everybody’s interested in a treasure hunt.”

Above: The indefatigable Talmadge pursues a henchman up the rigging of the Lottie Carson.