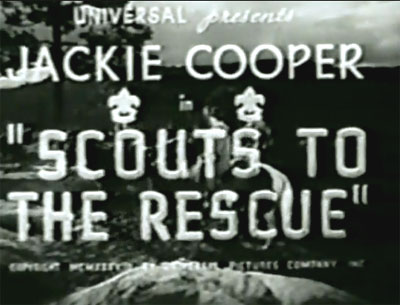 A Boy Scout troop led by Bruce Scott (Jackie Cooper) goes on a camping excursion in a remote mountain range, where the Scouts soon find themselves battling a ruthless gang of counterfeiters that has kidnapped engraver Pat Scanlon (Edwin Stanley), the father of tenderfoot Scout Skeets Scanlon (Bill Cody Jr.). G-Man Hal Marvin (William Ruhl) is on the trail of the counterfeiters as well, but mistakenly believes that Scanlon is a member of the gang and is responsible for the murder of his partner; Bruce, Skeets, and their wood-wise comrades do their best to convince Marvin of his error, while helping him track down counterfeiting ringleader Turk Mortensen (Ivan Miller). The G-man and the Scouts must also reckon with another foe–a ferocious lost tribe of primitive Indians who are quite prepared to kill any outsiders that venture into their mountain fastnessess.

Scouts to the Rescue is something of a pastiche of the boys’ adventure-book series that sprung up in the wake of Edward Stratemeyer’s successful Rover Boys novels at the beginning of the 20th century (The Hardy Boys series being the most famous example). Like so many of those stories, Scouts features a heroic group of young “chums,” an adult authority figure who (somewhat improbably) accepts the help of the kids, a delinquent boy who eventually reforms, and a mean but rather nondescript group of heavies. However, Scouts is far more entertaining than the blandly-written material that seems to have inspired it, thanks to a lively cast, energetic action scenes, and visuals that rank among the most magnificent seen in any Universal serial.

Basil Dickey, George Plympton, Joseph Poland, and Wyndham Gittens provide Scouts’ screenplay, ostensibly using a story by Irving Crump from Boy’s Life magazine for their source. The quartet set up their plot with care and deliberation, devoting the first two chapters to moving all the leading characters into the mountains. However, once all the principals have assembled in the wilds, the narrative stops developing and turns into a series of captures and escapes, with Scanlon, Skeets, and Skeets’ sister Mary passing in and out of the counterfeiters’ hands on a semi-regular basis–while Marvin continually tries to run the engraver down himself and the Scouts try to help both the Scanlons and the G-man. 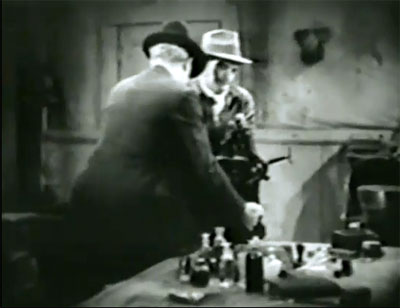 Above: Marvin and Scanlon do come to a truce late in the serial; here the two (Edwin Stanley’s Scanlon at left, William Ruhl’s Marvin at right) remove the counterfeiters’ press from a ghost-town building.

Continual attacks by the Indians provide several interruptions to the duel with the counterfeiters, however, and help to blunt the repetitiveness of the plotting. The Indians’ valuable radium caves could (and should) have been used to lend further variety to the storyline by giving the heavies a new and bigger target, but the Mortensen gang only shows temporary interest in the radium before returning to their pursuit of Scanlon. Still, the serial’s storyline, though repetitious, never becomes tiresome; the pace remains fast, and the protagonists are more than likable enough to keep us interested in their adventures. 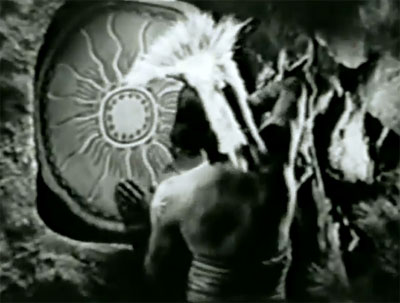 Above: One of the wild-card Indians sends a message on a stone drum in the “Cave of the Winds.”

The serial’s terrific location filming also plays a big part in holding the audience’s interest; most of Scouts was shot near Sonora in a section of the majestic Sierra Nevada mountain range. The area’s steep roads, deep canyons, towering slopes, pine forests, bridges, footpaths, and rivers provide a distinctive and frequently breathtaking backdrop for the action; cinematographer William Sickner and directors Alan James and Ray Taylor do an excellent job of showing this scenery off to good effect. The primeval-looking locations also help to make the “lost” Indian tribe somewhat more credible than it would have been had the serial been shot at the less wild Iverson’s or Kernville. The backdrops for the serial’s Hollywood-filmed scenes are good too; Universal’s Western street figures prominently throughout the serial as an abandoned mining town, while their backlot cave is seen as the Indians’ temple.

Above: David Durand as Rip Rawson tries to get his bearings in the forest (top  left), the Scouts and their ponies make their way into the wilderness (top right), the Indians pursue Jackie Cooper down a ravine (bottom left), and an Indian prowls on a bridge across a rocky stream-bed (bottom right).

Scouts’ visuals are memorable in another respect; aside from the Boy Scout ceremony in the opening chapter, a few airplane scenes, the wild horse stampede sequence, and occasional quick shots of wildlife (coyotes, a bear, an oft-sighted deer) the serial makes very little use of stock footage, especially when compared to other late-1930s Universal serial releases like The Oregon Trail or The Phantom Creeps. Thanks to the combination of a contemporary storyline with an outdoor setting, there’s no opportunity for Universal’s editors to overuse silent-film Western stock or urban newsreel footage as in so many of the studio’s other chapterplays.

The serial’s action scenes are plentiful and well-done, and make good use of the Sierra Nevada locations. There are numerous car chases along dangerous-looking mountain roads, with the Chapter Two chase (during which the Indians release a series of avalanches on the intruders) a particular standout. The Indians’ pursuit of Jackie Cooper down a ravine in Chapter Three, the wild canoe ride in Chapter Four, the escape from the Indians’ temple in Chapter Five, and the Chapter Ten ghost-town shootout are among the other highlights. Fistfight scenes are relatively scarce, although there are some good brawls scattered throughout the serial, particularly the Chapter Two plant fight and the Chapter Seven hillside fight; Eddie Parker doubles William Ruhl in both scenes, with Tom Steele and George DeNormand contributing as well.

Above left: William Ruhl’s car pursues the villains’ vehicle up a Sierra road. Above right: Jackie Cooper grapples with a henchman on the edge of a slope.

The chapter endings in Scouts are solid and frequently excellent; the avalanche, the canoe’s plunge over the falls, the bridge explosion, Jackie Cooper’s plummet from a ghost-town roof, and–especially–the fall of the primitive Indian elevator into the canyon–are all first-rate cliffhangers; Cooper’s drop from a cliff when a puma attacks the boy holding his climbing rope is also good, as are the barn and cave explosions. Strong as they are, however, the serial’s cliffhangers frequently fall victim to a great Universal failing: the heroes simply live through catastrophes instead of more believably dodging them at the last minute. 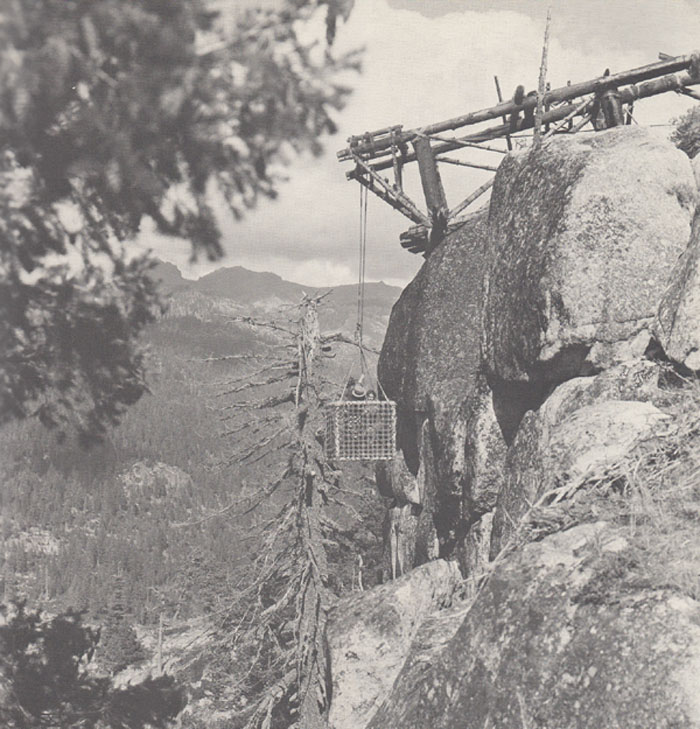 Above: Our heroes try to make an escape in the Indian elevator, seconds before the Indians cut the conveyance’s rope to end the chapter and send them to their (apparent) doom.

Star Jackie Cooper does a fine job in his only serial role; his quiet, sincere, but almost gruff manner makes his level-headed heroics quite convincing despite his youth. He also manages to deliver straight-arrow Boy Scout dialogue–as in his interchanges with “tough boy” Rip Rawson–with a low-key earnestness and lack of self-consciousness that robs the lines of potential “corniness” and makes them sound quite effective. The slick and rather sinister-looking William Ruhl is rather oddly cast as the serial’s co-hero, but he handles the offbeat part very well, barking out sharp commands in best G-man fashion and pursuing the counterfeiters with energy and grim determination.

Above: William Ruhl and Jackie Cooper.

Bill Cody Jr. is quite likable as Skeets Scanlon–enthusiastic about scouting and very concerned over his fugitive father, but never overdoing either the enthusiasm or concern; he manages to convey a calm (and appropriately Scout-like) resourcefulness throughout, and comes off as far more of a help than a hindrance to his seniors. Pretty Vondell Darr is very appealing as his older sister; her unsubtle but breathlessly excited delivery of dialogue matching well with her extremely ingenuous appearance. White-haired Edwin Stanley is convincingly shrewd, courageous, and upright as Cody and Darr’s harassed father, maintaining a dignified bearing despite very trying circumstances. 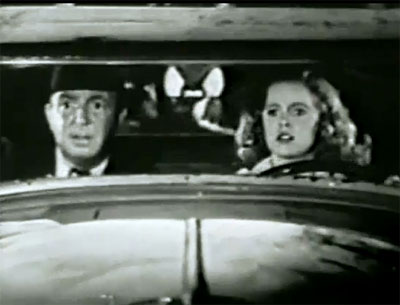 Above: Edwin Stanley and Vondell Darr.

Sidney Miller provides fine comic relief (without slowing the action down) as the fast-talking and nervously energetic Scout Hermie; he comes off not as a standard-issue serial bumbler but as an overconfident city boy who has understandable trouble adjusting to wilderness living. Frank Coghlan Jr. has a fairly good-sized part as Jackie Cooper’s second-in-command Ken; his cheerful and easygoing personality helps him play well off of Cooper’s solemnity and Miller’s garrulity.

David Durand, as “tough boy” Rip Rawson (who begins the serial as a petty local foe of the Scouts’, becomes a sort of apprentice henchman to the counterfeiters, and finally comes over to the good guys’ side) handles his difficult part as skillfully as possible. The writers should really have done a better job of foreshadowing his eventual change of heart, but Durand never makes Rip seem so nasty or obnoxious as to make the transformation totally incredible; he’s more grumpily sarcastic than thuggish in manner, and gives a strong touch of humor to the character (particularly in his disgusted reaction after being outsmarted by Skeets’ rope trick).

Above: Ever wonder how henchmen are recruited? Villain Ivan Miller (right) enlists David Durand after catching him trying to steal his spare tire.

The villains are much less interesting than the good guys; even Rip is more distinctive than his elders in crime. Ivan Miller is capably slick and smug as lead counterfeiter Turk Mortenson, but is also calmly businesslike to the point of blandness; he’s a functional stock villain, but not a memorable menace. Jason Robards Sr. and Victor Adams are a bit more individualized as two of his leading henchmen; the former slyly shifty, the latter decidedly hard-boiled–but neither especially memorable. Ralph Dunn is unthreatening but the most distinctive of the four principal counterfeiters; his character, the dull-witted Pug, is given some offbeat but good comic moments (like his attempt to pick up a girl or his self-cheating at solitaire).

The fierce and unpredictable Indians on the whole make far more intimidating heavies than the counterfeiters–particularly George Regas as the intense, glowering High Priest. Regas, incidentally, manages to be menacing despite a lack of decipherable dialogue; he and his warriors speak a memorably weird-sounding “language” that was produced by a simple soundtrack reversal. Their cave-temple is also memorable, equipped with grotesque-looking statues, a gigantic stone drum that makes a genuinely eerie sound, and boiling pits of “radium” vapor. 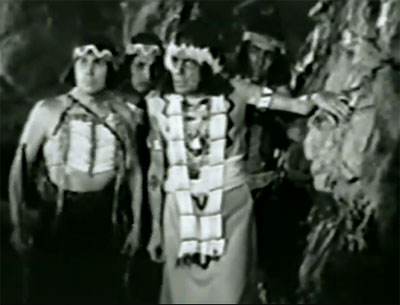 Above: George Regas (center) and his followers.

Richard Botiller is the leader of the Indian warriors, while Iron Eyes Cody plays one of the braves. Emmett Vogan is William Ruhl’s ill-fated partner in the first two chapters, while Lee Phelps pops up towards the end as another G-man and Max Wagner appears as a minor henchman. Edwin Brian is the injured, homebound Boy Scout who serves as his troop’s radio contact with the outside world, David McKim and Jim Hussey play other recurring Scouts, Bill Cartledge is one of Rip’s street-gang cronies, and Tom Steele and Eddie Parker appear in bit roles (a townsman, a mounted messenger) in the first chapter. The ever-genial Jack Mulhall also appears in the first episode, as the scoutmaster whose departure to care for an ailing wife leaves Jackie Cooper in charge of the troop for the remainder of the serial.

Scouts to the Rescue is not Universal’s most dramatic or imaginative serial, but it is a satisfyingly exciting chapterplay, not to mention one of the studio’s most handsomely-produced outings. Though definitely tailored towards the youthful readers of boys’ adventure fiction, it can also be easily and thoroughly enjoyed by cliffhanger aficionados of all ages.

4 thoughts on “Scouts to the Rescue”