Near the peaceful town of Alcana, on the Alaskan-Canadian border, a highway construction project comes under attack by a ruthless gang led by one Mort Fowler (Anthony Warde); Fowler’s unknown boss has learned that the cargo of an ancient Chinese treasure-ship is concealed somewhere in the area, and wants to be able to search for the loot without interference from the settlers that the highway will bring in. It will be up to RCMP Sgt. Chris Royal (Jim Bannon) to protect the highway crew, discover the reason behind Fowler’s reign of terror, rescue archeologist J. P. Belanco (I. Stanford Jolley) from Fowler’s gang, and uncover the gang’s mysterious leader.

Dangers of the Canadian Mounted draws extensively on stock footage from Republic’s earlier serials King of the Royal Mounted and King of the Mounties–but is still well worth viewing, even for those familiar with the two King outings. The new narrative surrounding the borrowed footage is more than serviceable, the original action scenes are very strong, and the filming locations are excellent.

Dangers might have been a rather dull serial if writers Franklin Adreon, Basil Dickey, Robert G. Walker, and Sol Shor had focused solely on the hackneyed construction-sabotage plotline. However, the scripters wisely place greater emphasis on the (far more interesting) treasure-hunting plotline; the hunt’s ramifications (a struggle over some books needed to translate ancient inscriptions, Belanco’s attempt to escape, Royal’s search for the scientist) drive the action for chapters at a time–while the periodic attacks on the highway are used largely to punctuate the search for the treasure, ensuring that neither subplot becomes tedious.

Above: One of the weird Chinese devices that holds a key to the treasure.

The treasure hunt also makes the serial’s storyline refreshingly linear; instead of pitting hero and villain against in each other in a repetitive series of loosely-connected encounters, the script moves the characters slowly but steadily towards three anticipated and logical conclusion–the rescue of Belanco, the finding of the treasure, and the unmasking of Mort’s boss. It must be said that the aforementioned boss’s identity is pretty obvious throughout, although the culprit’s final exposure does allow for an enjoyable piece of Charlie-Chan-style trickery on the hero’s part, something unusual in a Republic serial.

Extensive location shooting in the pine forests and on the rustic streets of the Big Bear Lake region gives the serial’s outdoor sequences an attractive and convincingly Northern appearance; Republic’s outdoor backlot sets and interiors are solid as well, particularly the ghost-town hotel and the treasure cave. The latter, furnished with the skeletons of previous treasure-seekers and a grotesque Asiatic demon statue, lends a memorably eerie touch to the later episodes. 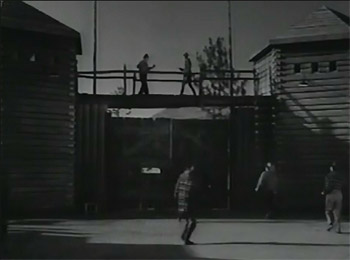 Above left: Jim Bannon gallops into the woods at Big Bear. Above right: Bannon corners a heavy on a fort wall (another Big Bear location).

As usual at Republic, the stock footage in Dangers (the forest fire, the motorboat chase, the pursuit of the station wagon, multiple horseback chases through the woods) is so smoothly integrated with the new footage that only viewers familiar with earlier efforts can spot it. However, the stock-footage use does cross the line into overuse in Chapter Nine, when a stock horseback chase and a stock jump onto a train already featured in Chapter One are presented as new action for a second time; such double-dipping is unusual even for a late Republic serial.

Fred C. Brannon and Yakima Canutt direct the serial’s new footage, with the action scenes benefiting greatly from ex-stuntman Canutt’s expertise; Tom Steele doubles hero Jim Bannon throughout, with Dale Van Sickel standing in for villain Anthony Warde and Ken Terrell, Bud Wolfe, Eddie Parker, and Carey Loftin also contributing to the action. Steele’s fight with Van Sickel and Wolfe in the abandoned hotel in Chapter Five–their combat eerily lit by a sparking electrical death-trap–is terrific, easily on a par with most of the Witney/English-directed fight scenes from Republic’s Golden Age. The Chapter Two cave fight (Steele vs. Van Sickel and Terrell) is also excellent, as is the Steele-Van Sickel fight on the sentry-walk above the gates at the edge of town (Chapter Seven). 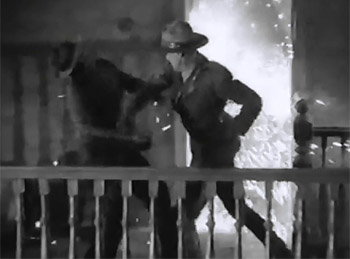 Above: Shots from the hotel fight.

Other action highlights include the chase through town that precedes the sentry-walk fight, the fight in the treasure cave in Chapter Eleven (with poison gas engulfing the combatants), the Chapter Nine shootout at the road camp, and the nifty Chapter Eight sequence that has Royal starting a fight with Fowler on the Alaskan side of the border and punching him until he (literally) falls within the Mounties’ jurisdiction, wishing him “welcome to Canada” as he arrests him. The serial’s chapter endings are good, though largely recycled (the freight-car explosion, the station wagon’s collision with an explosives truck, the overturned speedboat); among the serial’s new cliffhanger scenes, the fall from the sentry-walk and the poison-gas sequence stand out. 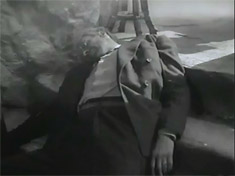 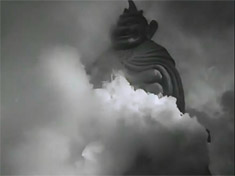 Above: I. Stanford Jolley (left) and Jim Bannon (right) are overcome by the gas billowing out from beneath the Chinese idol (center) in the Chapter Eleven cliffhanger sequence.

Jim Bannon delivers a low-key but likable leading performance, coming off as both stalwart and shrewd; his tough appearance, drawling voice, and thoughtfully laconic manner suit him well to the part of a backwoods policeman. Virginia Belmont, as bush-pilot heroine “Bobbie” Page, is quite pretty but delivers all her dialogue in a rather disinterested monotone, turning in the only sub-par performance in the serial.

Above: Jim Bannon and Virginia Belmont.

Anthony Warde has one of his best serial showcases as Mort Fowler, effectually serving as the serial’s lead heavy despite his official status as a henchman. He delivers sarcastic dialogue with gusto, reacts to Professor Belanco’s displays of erudition with amusing befuddlement, and is harshly and convincingly menacing when trying to kill the hero or threatening to “smash [Belanco’s] face in.” As Belanco–who goes into partnership with Fowler without realizing the latter’s criminality–I Stanford Jolley gets to display entertaining annoyance at the backwardness of his odd colleagues, hoodwink them smoothly (after discovering their illegal activities), and stand up to their threats with dignity; his suave and assured performance comes close to stealing the serial at times.

Above: Anthony Warde and I. Stanford Jolley.

Phil Warren is good as the hero’s chipper aide-de-camp, but never gets to leave the RCMP post; instead, Marshall Reed serves (quite effectively) as Bannon’s occasional sidekick in outdoor action scenes (my guess would be that Warren was unavailable for the trip out to the Big Bear area). Dorothy Granger is colorful as the tough-talking but genial Skagway Kate, who runs a boarding house and diner on the Alaskan side of the border and serves as one of the mystery-villain suspects; the other suspect slots are filled by Ted Adams as a garrulous, piano-playing old-timer and John Crawford as a slick and shifty-looking gambler.

Above: Ted Adams and Dorothy Granger.

The stocky and placidly smug Lee Morgan, as the middleman who relays the unknown boss’s orders to Fowler, provides a good contrast to Anthony Warde’s gruffly impatient villainy. Stuntman Eddie Parker plays a fairly large part throughout the serial as the henchman assigned to guard Belanco, and handles his unusually large share of dialogue quite well. Dale Van Sickel plays multiple henchmen and a road-crew worker, while Tom Steel, Ken Terrell, and Bud Wolfe also pop up in more than one heavy role and Ted Mapes appears as a Mountie. Van Sickel’s young son Bill (in his only screen appearance) plays the heroine’s kid brother, handling his dialogue quite energetically and capably despite his age and lack of acting experience.

James Dale plays the foreman of the beleaguered construction crew, veteran character player Jack Clifford is the US marshal, and Mike Ragan is a henchman who infiltrates the Mountie post in novel fashion. Bob Wilke pops up briefly as a Mountie, Jack Kirk as a pharmacist, and House Peters Jr. as a thug; the voice of former serial and B-western star Don Barry can be heard very briefly, as that of a librarian who provides the Mounties with information over the phone.

Dangers of the Canadian Mounted’s heavy reliance on stock footage places it a few notches below the more visually original Republic post-war outings that preceded it (Jesse James Rides Again, Son of Zorro, The Black Widow)–but, unlike many of the studio’s other late outings, it’s more than just a pleasant patchwork of older footage; it contributes some fine plotting and action of its own to the Republic canon.

5 thoughts on “Dangers of the Canadian Mounted”