Naval Commander Don Winslow (Don Terry) and his destroyer, the 620, are dispatched to the Pacific island of Tangita by Naval Intelligence–where the Navy’s attempts to build a new base are being sabotaged by the agents of the Scorpion, a sinister spymaster in the service of America’s (unnamed) enemies. The Scorpion’s men have established a vast underground espionage base and secret submarine harbor on Tangita, and are determined to keep the Navy out–but Winslow, who has thwarted the Scorpion before during a previous tenure with Navy Intelligence, soon begins to block their attacks on the Navy’s construction project. However, Winslow’s fight against the spies is hindered by the treachery of outwardly honest Tangita mine-owner Spencer Merlin (John Litel)–who is actually the Scorpion’s chief agent on the island.

Based on the comic strip by Frank Martinek and the radio series it spawned, Don Winslow of the Navy proved popular enough in its original release to lead to a sequel, but has typically been overlooked or disparagingly dismissed by most later serial buffs–an unfortunate fate for an unremarkable but respectable chapterplay. While it’s true that Navy, like other Universal serials from the 1940s, is definitely deficient in the action department, it’s stronger than many of them when it comes to pacing and plotting; like most Universal outings, it’s also buoyed by a talented and energetic cast.

The serial’s script–by Griffin Jay, Paul Huston, and Morgan Cox–moves its characters swiftly from one point to the next, without indulging in the excessive and repetitive dialogue scenes too common to some of its contemporaries. The writers also eschew the use of the squabbling protagonists or dueling villains that figured in so many other Universals of the period; here, both good guys and bad guys battle each other steadily without wasting their time on infighting. As a result, the storyline is simpler and more uncluttered than the Universal norm, but is never dull or repetitive–thanks to the care with which the writers alternate between the villains’ attacks on various Naval vessels, their assaults on Winslow himself, and Winslow’s ongoing attempts to locate their secret base. This continual switching from one plot thread to another is more than enough to keep the narrative fresh throughout twelve chapters. 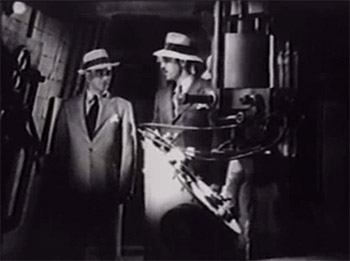 Above: The heroes (left) and the villains (right) lay their respective plans. Going left to right through both pictures, the actors shown are Kenneth Harlan, Don Terry, Walter Sande, John Litel, and Robert Barron.

The writers also do a good job of characterizing their protagonists (no doubt some credit is due here to Frank Martinek as well). The affably breezy interchanges between Winslow, his lieutenant “Red” Pennington, and Naval Intelligence operative Mike Splendor–and Don and Red’s equally cheerful bantering with their respective girlfriends, nurse Mercedes and secretary Misty–effectively serve to deepen our affection for the leading characters. The underplayed but moving heroics in the final chapter are also very well-written, with Winslow and his friends quietly but resolvedly determining to stop the Scorpion’s attack on the 620, even though it will mean seemingly certain death for them. This climactic sequence, incidentally, is another feature of the serial that raises it above the 1940s Universal norm–the hero is allowed to be directly responsible for the destruction of the heavies, instead of standing by while they kill each other off (as in Adventures of Smilin’ Jack or Adventures of the Flying Cadets).

Above, from left to right: Anne Nagel, Claire Dodd, Don Terry, Ben Taggart, and Wade Boteler agree to do and die in the dramatic final chapter.

Directors Ray Taylor and Ford Beebe, like the writers, keep the serial moving nicely, even though the characters spend more time investigating clues, trailing enemies, or rushing from place to place than actually fighting each other with guns or fists. Despite the presence of Dale Van Sickel and Tom Steele in bit roles, there’s relatively little stuntwork in the serial, most of the fight scenes being extremely brief–although some of these short sequences are pretty good, among them Winslow’s Chapter Seven leap from a temple wall and his ensuing battle with two hostile natives, the Chapter Eight fight in the hut (which incorporates more acrobatics than most of the other brawls), and the fight in the blazing hangar in Chapter Nine. Winslow and Red’s seagoing fight with the “human torpedo” in Chapter One, the Chapter Nine dogfight between Winslow and a Scorpion pilot, the Chapter Ten fight on the boat (with Steele and Van Sickel taking part), and the well-filmed shootout at the abandoned sea-mill in Chapter Five are among the serial’s other action highlights.

Above left: A henchman makes a flying leap onto Winslow as the hero battles another thug in the Chapter Eight fight scene. Above right: The heavies take cover during the sea-mill shootout.

The aforementioned sea-mill–full of cobwebs and ruinously ominous in appearance–is one of several excellent and well-appointed sets (both miniature and life-size). The villains’ underground submarine harbor, the cavernous tunnels leading to it, the grass huts, jungle trails, and docks of Tangita Island, the bridges of various ships, and the huge native temple  (frequently seen in Universal’s Mummy movies) lending Navy plenty of visual variety despite the strong probability that the production crew never left Universal’s backlots. The serial makes much less use of stock footage than its wartime sequel Don Winslow of the Coast Guard; the naval maneuvers sequence in the first chapter and the mammoth Marine attack on Merlin’s mine in Chapter Eleven representing the only extensive or jarring use of stock shots; other bits of reused footage, like Winslow’s ramming a ship into a sub, are incorporated much more smoothly.

Above: An establishing shot of the villains’ secret submarine harbor.

The serial’s chapter endings undoubtedly make much use of stock as well, but generally in unobtrusive and quite successful fashion; cliffhangers like the “mosquito boat’s” collision with the human-torpedo vehicle at the end of Chapter One, the cliffside flaming-car sequence that concludes Chapter Two, the toppling smokestack in Chapter Four, and the shack bombing in Chapter Seven are memorable and striking no matter what the original source–although Winslow improbably lives through far too many of them. Some of the entirely original cliffhangers, like Winslow’s apparent death-by-chemical-fumes in the mine’s gold-reduction room (Chapter Eight)  or his near-drowning in the dungeon (Chapter Five) are also very good–and are more credibly resolved as well.

Don Terry delivers a strong and enthusiastic leading performance; his rough-sounding voice and ramrod-like bearing make him a thoroughly convincing Naval officer, while his decidedly boisterous joviality keeps him from ever seeming stiff or humorless. Walter Sande is also excellent as Red Pennington, cheerfully flippant most of the time but always able to turn believably sober and level-headed when the situation is serious. Claire Dodd is a lovely and appealingly spirited heroine, while Anne Nagel, though in the background much of time, gets in some lively wisecracking as Misty.

Above: Don Terry and Claire Dodd.

Ever-likable Wade Boteler plays the Irish-accented Mike Splendor as a sharper-witted version of his Irish-accented Mike Axford in the Green Hornet serials; Splendor is more responsible and dependable than the hot-headed blunderer Axford, but still spends much of his time feistily and impatiently longing for a good fight. Ben Taggart, usually a pompous solid citizen or a pompous villain, manages to be dignified but sympathetic as concerned Navy contractor John Blake, while a young Peter Leeds, who later became a familiar face on the TV comedies of the 1950s and 1960s, gets to participate in a fair share of action as Winslow’s trusty radio operator Chapman.

A-film character player John Litel, who specialized in playing brusquely straightforward professionals, initially seems miscast as a devious master spy, but carries off the role well. His authoritatively businesslike approach to his villainy gives him a threateningly competent air; his briskly helpful pose when in Winslow’s presence is also exceptionally convincing. He even indulges in some atypical but effective evil grins–most memorably when sending an erring henchman on a suicide mission. The heavily-accented and demonic-looking Kurt Katch, as Litel’s boss the Scorpion, only makes token appearances on a two-way TV screen but packs them full of menace, threatening his followers with punishment for their failures and continually demanding that Winslow be turned over to him for a personal execution.

Litel’s chief henchmen are played by the genteel and suave John Holland, the less refined but still slick Robert Barron, the crabbily thuggish Ethan Laidlaw, and the tough-looking but rather cheerful Lane Chandler–who together make up a nicely varied quartet of action heavies. Paul Bryar is good in a brief role as another high-ranking henchman, Ray Teal is the villains’ radio operator, and Arthur Loft plays the unfortunate heavy who is assigned to human-torpedo duty in the first chapter. Guy Kingsford is a villainous sub commander, while old reliable Frank Lackteen has a good if short-lived part as the scheming and shifty witch-doctor. Jerry Mandy is a crooked hotel proprietor, Ray Teal is the heavies’ radio operator, Edward Hearn and Iron Eyes Cody have bits as thugs, and Jack Rockwell plays a somewhat more prominent part as another Scorpion agent.

Herbert Rawlinson and Samuel S. Hinds receive high billing but are only on screen briefly as Navy brass in the opening episode; Kenneth Harlan also appears in the same chapter as an Intelligence officer. Dirk Thane, a solemn and deep-voiced actor rather reminiscent of Dennis Moore, is the acting commander of Winslow’s destroyer for much of the serial, and John Merton unexpectedly pops up on the side of the angels as the destroyer’s helmsman. Heenan Elliott is a beleaguered ship captain, William Desmond has a glorified walk-on as a smelter foreman, and Eddie Polo–like Desmond, one of the premiere silent-serial heroes–appears briefly as an assistant to a crooked but mild-mannered chemist played by Irving Mitchell.

Don Winslow of the Navy does not belong in the top rank of Universal’s serials, but it still deserves a higher rating than most serial buffs have awarded it; its fast pace, interesting settings, engaging collection of heroes, and happily uncomplicated script make it consistently entertaining, if never really outstanding.

Above: Walter Sande and Don Terry exchange an idiosyncratic “good luck” salute as Terry goes to receive his dangerous Tangita assignment from the Navy top brass.

6 thoughts on “Don Winslow of the Navy”