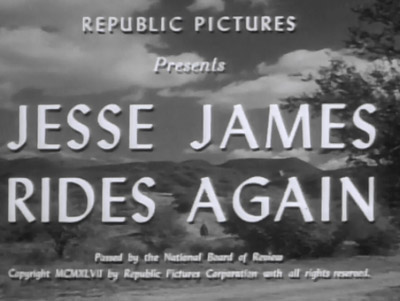 Famed outlaw Jesse James (Clayton Moore)–wishing to settle down and go straight, but still pursued by the law due to his notorious reputation–goes on the run with old friend Steve Long (John Compton) and eventually winds up in Peaceful Valley, Tennessee, where the local farmers are being terrorized by a band of masked outlaws called the Black Raiders.The Raiders’ field commander is a tough named Lawton (Roy Barcroft), but their real boss is respectable land agent James Clark (Tristram Coffin), who alone knows of the vast oil deposits under Peaceful Valley’s farmland and is determined to drive out the local landowners so he can capitalize on the knowledge. Jesse and Steve, after rescuing farmer Sam Bolton (Tom London) and his daughter Ann (Linda Stirling) from a Raider attack, promptly become the leaders of the fight against the ruthless band, and must defend the valley against the Raiders without letting the local lawmen find out that the heroic “John Howard” is also the infamous Jesse James.

Republic Pictures first began its successful film association with America’s most famous outlaw in 1939, when the Roy Rogers B-western Days of Jesse James (featuring Don Barry as Jesse), won unexpected critical plaudits for being far more historically accurate than 20th-Century Fox’s big-budget Jesse James film released the same year. Days also went over very well with audiences in the West and South, where Republic releases were invariably popular and where Jesse was still a well-remembered folk hero. Republic took note of James’ selling power and cast Rogers himself as the outlaw in the 1941 feature  Jesse James at Bay–which cheerfully abandoned historical accuracy and went unnoticed by critics, but still enjoyed financial success. In 1947, to capitalize on the centennial of the real Jesse’s birth, Republic returned to the James well once again and brought the outlaw to the serial screen for the first time; the result was an excellent (if historically shaky) serial that was popular enough to lead to two chapterplay sequels.

Franklin Adreon, Basil Dickey, Jesse Duffy, and Sol Shor handle the scripting duties of Rides Again, and for the most part rely on standard Republic formula for their plot machinery, with a series of skirmishes between Jesse and the Raiders providing the basis for the action. The script never becomes tediously repetitious, however; the writers use a good succession of subplots–Steve’s infiltration of the Raiders, Clark’s attempts to recover a geological survey map that could give his scheme away, Jesse’s discovery of a traitor among the farmers–to lend variety to the series of hero-villain duels.

The writers also shake up their narrative nicely in Chapter Ten, with Jesse actually discovering the existence of the oil deposits and the farmers mortgaging their land to Clark in order to finance their own oil rig; this new twist to the storyline ultimately leads to a satisfyingly suspenseful climactic chapter, with Jesse rushing to pay off the mortgage before the midnight deadline. The last chapter also features a welcome payoff to the Jesse-as-wanted-man subplot, which is established in Chapter One but relegated to the background in intervening episodes. (The writers do remind the audience of Jesse’s incognito throughout those episodes, however–which gives the storyline an added touch of tension and prepares the way for the conclusion). 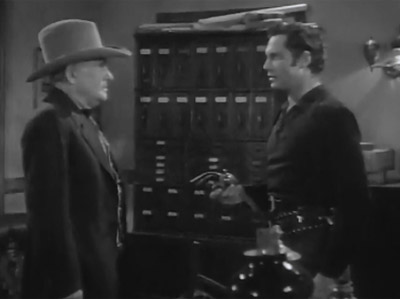 Above: Clayton Moore’s Jesse meets up with an old acquaintance, Sheriff Mark Tobin (Tom Chatterton) of Missouri, in the climactic scene.

Thomas Carr–who won his directorial spurs on some of Republic’s most action-packed 1940s B-westerns–does an excellent job on his only Republic serial assignment, in collaboration with Fred Brannon. The fistfights are very good, Carr filming them somewhat more imaginatively and fluidly than most of the competent but rather mechanical fight scenes in Brannon’s or Spencer Bennett’s post-war serials–a good example being the saloon brawl in Chapter Two, with Clayton Moore slugging Roy Barcroft towards a slowly retreating camera. Tom Steele and Dale Van Sickel double for Moore and Barcroft throughout the serial, with all the other expected Republic stuntmen–Gil Perkins, Ken Terrell, Bud Wolfe, Fred Graham, Duke Taylor, Eddie Parker, Loren Riebe–appearing for one or more fight scenes. 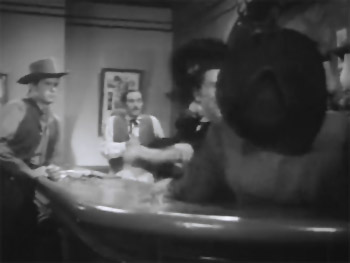 Other action highlights include the well-directed brawl at the outlaw camp in Chapter Three,  the Chapter Six saloon fight with Steele taking on Van Sickel and Graham, the Chapter Eight barn fight (with Steele, Van Sickel, and Perkins) and the Steele/Van Sickel fight at the oil field in Chapter Eleven. The serial’s gunfight scenes are excellent too, with Clayton Moore dropping an unusually high percentage of heavies in a coolly practiced fashion befitting a supposed veteran gunslinger. Among the best of the serial’s big and small gun battles are the Chapter Two attack on the Wilkie farm, the cave shootout in Chapter Five, Jesse’s confrontation with a pair of ambushers in Chapter Six, the attack on the drilling crew in Chapter Eleven, and the very quick but effectively startling final showdown between Jesse and Lawton. 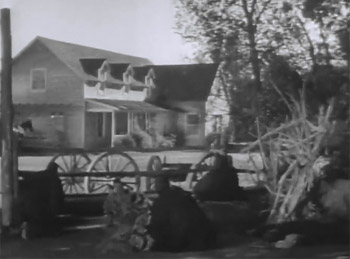 Above: Shots from the cloaked Black Raiders’ first-chapter assault on the Bolton farmstead. John Compton, Linda Stirling, Tom London, and Clayton Moore (right to left) are all in the left-hand shot.

The serial makes little use of stock footage in its action scenes, the two big exceptions being the outlaw attack on the supply train in Chapter Eleven (lifted from Zorro’s Black Whip) and the oil-wagons’ dangerous race across a flaming prairie in Chapter Twelve (borrowed from Republic’s big-budgeted John Wayne feature War of the Wildcats). The Whip footage fits smoothly enough, but the Wildcats borrowings are a bit jarring; they provide a memorably spectacular piece of action for the serial’s penultimate chapter, but the Utah desert locations where Wildcats’ climax was filmed just don’t match smoothly with Republic’s familiar Iverson’s Movie Ranch locations–which are featured in the new footage intercut with the Wildcats stock, and which also serve convincingly enough as Tennessee hills in the serial’s numerous original outdoor action scenes.

The serial’s chapter endings make much more seamless use of stock, working recycled Lydecker Brothers miniatures like the exploding riverboat, the exploding barn, or the collapsing oil derrick neatly into the new action. There are also several all-new chapter endings that work extremely well–particularly the cave-ambush cliffhanger in Chapter Three, which is suspensefully set up by the sudden and complete cessation of background music; the only noise on the soundtrack during the sequence is the crunching of Clayton Moore’s boots on the ground as he slowly approaches the outlaws’ hiding place. Moore’s apparent drowning at the end of Chapter Four, with its uniquely delayed next-chapter resolution, is also memorable, as is the Chapter Seven ending, with Linda Stirling registering proper terror as a crushing cotton-press descends on her. 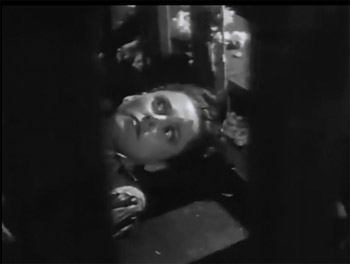 Above: Shots from the cotton-press cliffhanger.

Clayton Moore is perfectly cast in the serial’s title role; few other chapterplay leading men could have carried off the part of an ex-outlaw hero so convincingly. Though he’s affable in respites from action, and convincingly earnest about his desire to leave his dark past behind, he also gives his Jesse a steely but intense demeanor that makes the existence of said past quite believable; the intense and almost murderous glares he bestows on heavies and the ferocious swiftness with which he guns them down particularly help to give his characterization a genuinely dangerous edge.

Above: Clayton Moore about to nail a fleeing outlaw.

Linda Stirling, who was expecting her first son during the serial’s production and was preparing to leave Republic Pictures for good, has much less to do here than in any of her other serials–but still does it well, reacting to the serial’s action with intelligent concern and handling her few romantic moments with sidekick John Compton with great charm. Compton’s own performance is only adequate overall; while he handles his lines with more vigor than many serials’ secondary heroes (his pronounced Tennessee twang giving his delivery added authenticity), he’s apparently either unwilling or unable to change his blandly cheerful facial expression no matter what the situation.

Above: Linda Stirling and John Compton.

Tristram Coffin and Roy Barcroft are well-matched as the serial’s heavies. Coffin spends most of his screen time pacing tensely about his office and snapping out orders with cool but aggressive self-assurance, or hoodwinking the protagonists with a straightforward man-of-the-world manner–while Barcroft executes the active villainy in brutishly gleeful fashion and grumbles lazily between assignments; the various interchanges between the two villains, with Barcroft continually muttering “I dunno” in response to Coffin’s sharp queries, are quite humorous at times without diminishing either character’s menace. Stocky and tough-looking Holly Bane, somewhat oddly cast as Coffin’s nervous clerk, frequently sits in on these villainous conferences as well; his and Barcroft’s chortling confusion over Coffin’s latest scheme in Chapter Ten is particularly enjoyable.

Tom London is very likable as Linda Stirling’s wheelchair-bound but feisty and incurably cheerful father, while Edmund Cobb is suitably dogged as Wilkie, another of the beleaguered farmers. Ed Cassidy and LeRoy Mason pop up in the later chapters as (respectively) a veteran wildcatter and a suave but non-crooked oil buyer. Venerable silent comic Chester Conklin, one of the old-time Keystone Kops, also appears late in the serial as the cook for the oil crew, and George Chesebro has a good showcase as a henchman terrorized by the “ghost” of Jesse James. Two other veteran henchmen–Charles King and Monte Montague–pop up briefly as badmen, as do all the serial’s stuntmen, with Fred Graham winning the meatiest part as a treacherous farmer. The typically dour Keith Richards is unusually lively as a wily “drunken” outlaw, Richard Alexander has a nice bit as a helpful blacksmith, Gene Roth is the town sheriff, Dave Anderson is funny as a dockyard loafer, and Tom Chatterton pops up at the end for a brief but excellent turn as grizzled Missouri sheriff Mark Tobin.

With its above-average action, its strong cast, and its interestingly offbeat premise, Jesse James Rides Again ranks as one of Republic’s best post-Golden Age Western serials, comparing quite favorably with earlier and more expensively-produced 1940s outings like Daredevils of the West. Like several other chapterplays from Republic’s early post-war years, Jesse is frequently underrated or overlooked, but is first-rate nonetheless.

Above: A good shot of Clayton Moore and horse against the Iverson skyline.