Ace American flyer Jack Martin (Tom Brown), wrapping up a tour of duty with China’s “Flying Tigers” in the pre-Pearl Harbor phase of World War 2, is asked by Chinese general Kai Ling (Sidney Toler) to undertake one more mission before returning to the United States. The Chinese are interested in a secret land route from China to British India that can serve as a supply line for them and their English allies in the fight against the Japanese; the route begins in the isolated and autonomous Chinese province of Mandon, which has been closed to the outside world by its rulers. Jack must first win the trust of Mandon’s governor Mah Ling (Cyril Delevanti), then protect him as he travels to sign international treaties that will allow the Allies to take temporary charge of Mandon but also guarantee the province’s post-war return to isolation. However, the German agent known as “Fraulein Von Teufel” (Rose Hobart), who commands the dreaded Japanese espionage group called the Black Samurai, is also determined to obtain the Mandon secret for the Axis. It will be up to Jack, British agent Tommy Thompson (Edgar Barrier), Tommy’s sister Janet (Marjorie Lord), and Chinese Air Force Captain Wing (Keye Luke) to make sure the secret of Mandon remains in the Allies’ hands, despite the unsuspected presence of Fraulein Von Teufel in their own camp, in the guise of war correspondent Trudy Miller.

Adventures of Smilin’ Jack has much to recommend it: an impressive cast, strong production values, an interesting variety of settings, and very well-drawn characters. These assets frequently succeed in distracting the viewer from the serial’s biggest flaw: its relentless focus on dialogue at the expense of action. (It also completely ignores its supposed source material, the colorful comic strip by Zack Mosley, but that’s the least of Jack’s problems). Smilin’ Jack is basically the template for the Universal serials from the studio’s last cliffhanger-producing years (1942-1946); like most of the outings in that group, Jack is much better-written than the chapterplay norm, but is far too full of talk. Not coincidentally, the sole author of Jack’s screenplay, Morgan Cox, would go on to produce nearly all of those latter-day Universals; it seems more than likely that he encouraged the various writers of those serials to imitate his own work on Jack.

That said, Cox’s screenplay for Smilin’ Jack does avoid some of the pitfalls of subsequent Universal serials; there’s much less time spent here on dialogue recaps than in The Royal Mounted Rides Again or The Master Key, with quick conversations between various officials serving to bring the audience up to date at the beginning of each chapter. Cox’s script also maintains more forward momentum than most of the Universal serial screenplays that followed it, moving the characters from coastal China to Mandon to Hong Kong to a series of trans-Pacific vessels (a clipper ship, a Japanese sub, a disguised Axis freighter) to Hawaii and finally back to China; the constantly changing locales give some variety to the villains’ incessant attempts to capture Mah Ling, which would otherwise seem too repetitive.

Above: One of the serial’s convincing Chinese settings, a dockyard complete with junks. That’s Rose Hobart in the rickshaw coming down the pier.

The serial’s most interesting portion is its first two chapters, in which Jack and Janet must penetrate into Mandon to find Janet’s missing brother and forge an alliance with Mandon’s suspicious rulers–while battling some duplicitous Japanese envoys. This scenario allows the hero to engage in some nice pieces of individual derring-do–but, once the treaty-signing plot comes to the fore in Chapter Three, Jack is assisted in almost every scene by the Thompsons, Captain Wing, Mah Ling’s aide Wu Tan, and Mah Ling himself; while it makes definite real-world sense that an important diplomat would be guarded by multiple Allied agents, the presence of such a large supporting cast precludes most of the one-man heroics expected of a serial star. The false murder charge laid against Jack late in the serial does allow him to participate in a little more solo action, but for about two-thirds of the serial he’s little more than “first among equals” in a gang of good guys.

However, there are many sequences in the serial that could have been exciting despite the surplus of protagonists–the hijacking of the clipper, the escape from the Japanese sub, or the escape from the freighter. Unfortunately, Cox’s over-emphasis of dialogue drains most of the excitement from these and other scenes. The thwarted clipper hijacking turns into a talky murder investigation, while in the sub and freighter sequences the heroes spend much more time discussing their plight and planning their escape than they do in actually engaging the villains. The final chapter is even more disappointing; the villains kill each other off in propagandistic but very unconvincing fashion, while the hero and his friends merely make an easy escape from the heavies’ basement.

The script’s rare pieces of action–directed by Lewis Collins and that trusty old workhorse Ray Taylor–are invariably well-done, some highlights being the chase through the streets of Mandon in Chapter Two and the subsequent encounter with a machine-gun-wielding Japanese officer in Mandon’s temple, the car chase that bridges Chapters Three and Four, the brief fight on the sub, and a fight between Jack and a heavy aboard a boat in Chapter Ten (Ken Terrell doubles star Tom Brown here and in other short bouts of fisticuffs).

Above: Tom Brown, Marjorie Lord, and Chinese soldiers in a short-lived but good shootout with a car full of Japanese soldiers.

While many of the chapter endings consist of mundane car and plane crashes, there are also some memorably unique cliffhangers sprinkled throughout the serial–Jack’s apparent skewering by a row of spikes, his near-drowning inside a submerged crate, and his walk across hot coals as he tries to prove his innocence of a murder to the superstitious Mandonese. The spike-trap and hot-coals scenes are particularly good, very dramatically shot and staged by the directors and by cinematographer William Sickner. 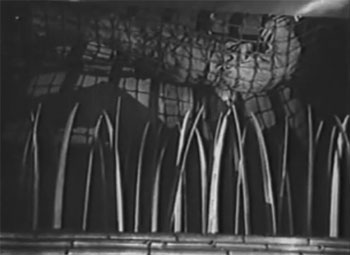 Above left: The spikes rise towards a trapped Tom Brown. Above right: Brown attempts to stride across the burning coals.

As always at Universal, the serial’s production values are excellent; the village and the mammoth temple in Mandon, the streets and docks of Chung-King, the shady waterfronts of Hong Kong, and the blackout-darkened streets of Honolulu are all convincingly represented by impressive interior and exterior sets and inhabited by a multiplicity of extras. The prop department, with help from writer Cox, come up with some interesting devices as well–most memorably the villainous Fraulein’s dart-shooting pen and the science-fictional recording device that allows Axis agents to literally put words in other people’s mouths. 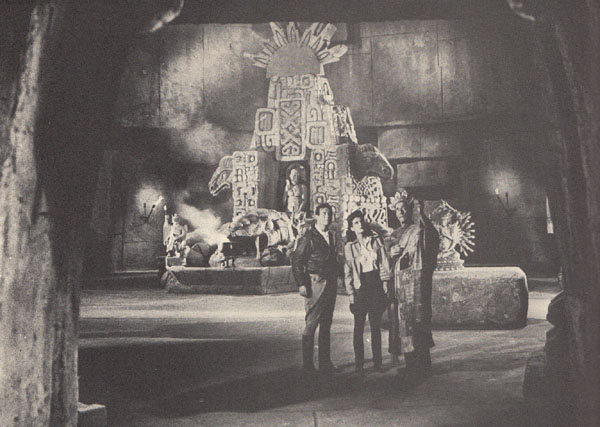 All the members of Smilin’ Jack’s exceptional cast–most of them actors with respectable A and B-feature filmographies–handle their reams of dialogue with commendable skill and flair. The cheerfully energetic Tom Brown makes a perfect “All-American Everyman” hero; his outspoken, guilessly honest, and scrappily determined characterization contrasts admirably with the subtle and scheming nature of his adversaries. Rose Hobart is very good as the leader of said adversaries; she eschews the megalomaniacal bluster of most serial Nazis for steely professionalism as she goes about her villainy, simultaneously conveying fearlessness and despicable ruthlessness–and also manages to put up a completely convincing façade of likability when posing as Trudy Miller. 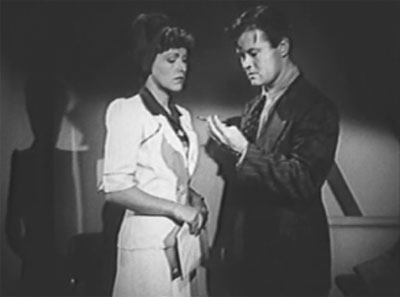 Above: Tom Brown investigates a clue to the discomfiture of Rose Hobart.

Marjorie Lord makes a very charming and intelligent heroine, although after the first two chapters she’s largely shunted into the background. Edgar Barrier, almost always a heavy in his feature-film roles, does a good job of playing against type as her dignified and capable brother, and (unlike Lord) affects a very convincing British accent. Keye Luke, one of the few serial veterans in the cast, is his usual appealing self as Captain Wing, balancing calm self-assurance with affable enthusiasm. 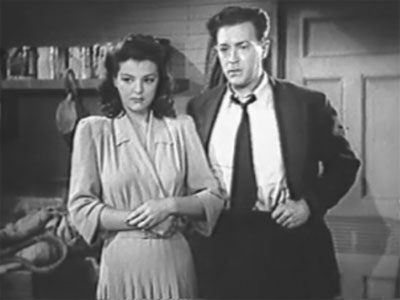 Above: Marjorie Lord and Edgar Barrier.

Cyril Delevanti, as in Red Barry, does a terrific job as a rigid but honorable Mandarin type; his Mah Ling is coldly reserved and formally legalistic throughout, but eventually becomes quite likable for his unflappable courage and his incorruptible aura–all without Delevanti ever relaxing his aloof manner or blatantly playing for sympathy. Phillip Ahn is also very good as Delevanti’s loyal aide, while Nigel De Brulier is very imposing as the High Priest of Mandon–although he appears only in the early episodes and the concluding chapters.

Turhan Bey, like De Brulier, drops out of sight in the serial’s midsection, but still delivers a strong performance. As Kagemaya, the haughtily aristocratic Black Samurai leader forced to take orders from Fraulein Von Teufel, Bey is memorably suave, cynical, and sarcastic–continually needling his unwelcome co-conspirator and delivering barbed dialogue with urbane relish. Sidney Toler, in his Charlie Chan makeup, plays the phlegmatic but shrewd General Kai Ling, and David Hoffman is memorable as a crafty, double-dealing German agent in the later chapters.

Rico DeMontez is Turhan Bey’s chief assistant, Jay Novello has a good part as a slyly mendacious Japanese agent, while Jack Gardner plays a nasty Japanese officer in Mandon, Edward Colebrooke is the sub commander, and Edward Peil appears as the shifty captain of the spy freighter. All are good, but only Novello and DeMontez come close to being physically convincing as Orientals. Stanley Blystone has a prominent role in several chapters as a waterfront thug in Hong Kong, and Frederick Giermann is excellent as the German technician who demonstrates the voice-dubbing machine and manages to make its pseudo-scientific powers sound believable.

The serial’s enormous (by serial standards) cast of minor players is full of familiar actors. James Craven and Herbert Heyes play British dignitaries in Hong Kong, while Edward Keane and William Forrest pop up as US government officials in Honolulu. George Eldredge has a brief bit as a Hong Kong detective, while Harry Strang has a more substantial role as a police detective in the Honolulu chapters. Wheeler Oakman displays his usual swagger as the mate of the spy freighter, while Paul Bryar and Arno Frey appear briefly as German agents in the clipper sequence–accompanied by silent-serial queen Grace Cunard as a female German operative. Victor Zimmerman is another Nazi agent, and Jack O’Shea and Jerry Frank both appear as Honolulu policemen; Paul Dubov, a familiar face on television in the 1950s and 1960s, is one of the Mandon natives.

Adventures of Smilin’ Jack is rated very highly by most serial buffs, who are rightly impressed by its strong characterizations and its array of convincingly exotic settings. While the serial is undoubtedly top-notch when it comes to acting and to physical trappings, its lack of action scenes and its excessive talkiness too often combine to deprive it of any real sense of excitement. Smilin’ Jack is very watchable and always interesting, but it fails to rank as one of Universal’s best efforts in spite of its promising ingredients.

4 thoughts on “The Adventures of Smilin’ Jack”