Our old friends Tommy Tompkins (Clark Williams) and Skeeter Milligan (Noah Beery Jr.), now seasoned flyers, are engaged by oil tycoon Ned Curtis (Bryant Washburn) to conduct an aerial survey of oil lands in the small Latin American island country of Nazil. Tommy’s girl (and Curtis’s niece) Betty Lou Barnes (Jean Rogers) comes along for what promises to be a pleasant working vacation, but the Americans’ sojourn in Nazil proves to be fraught with danger. The kindly ruler of Nazil, Don Alvarado Casmetto (Harry Worth), is engaged in a civil war with his greedy half-brother Manuel (Herbert Heywood), who is bent on ousting Don Alvarado and seizing control of the island; Manuel is backed by ruthless oil magnate Horace Raymore (Matthew Betz), who hopes to take over Curtis’s oil concessions. The adventurous Tommy and Skeeter are soon making risky aerial raids into Manuel’s territory, tangling repeatedly with his land and air forces; their battles with the pretender’s rebel army are hampered by the treachery of Don Alvarado’s trusted secretary, Enrico Garcia (Paul Ellis), who moonlights for Manuel as the masked “Double-X Pilot.” The young daredevils have a masked ally of their own, however, in the person of the mysterious Eagle Pilot (known locally as El Condor), who continually turns up to help Tommy, Skeeter, Betty Lou, and their friends out of tight situations and then disappears in a cloud of camouflaging smoke.

The  first Tailspin Tommy serial was just as strongly focused on the various aeronautical exploits of its fledgling pilot hero–and on his interactions with his colleagues and his girl–as it was on his fight with the villains. Great Air Mystery, on the other hand, is more of a traditional serial, putting greater emphasis on hero-heavy battles than on character development–although, like most Universal serials of the period, it still features characterizations much stronger than the genre’s norm. Those characterizations–coupled with good acting, an interesting setting, and excellent aerial action sequences–make Great Air Mystery a very enjoyable serial, although it never manages to be as interesting as its predecessor.

Ella O’Neill, Raymond Cannon, and Basil Dickey, who handled the first Tommy serial’s script, do similar duty here–with additional input from George Plympton and Robert Hershon. The screenwriting quintet pace their narrative well, taking the better part of two chapters in getting their characters to Nazil. Once all the principals are on the island, the plot shifts into a series of skirmishes between Tommy’s outfit and the Nazil rebels–but before these sequences get too repetitive, the writers shake up their scenario by exposing Garcia, unmasking the Eagle, and destroying Manuel’s headquarters over the course of Chapters Nine and Ten; the final episodes then revolve around Raymore’s attempts to escape Nazil with some plunder and Tommy’s pursuit of the villain. 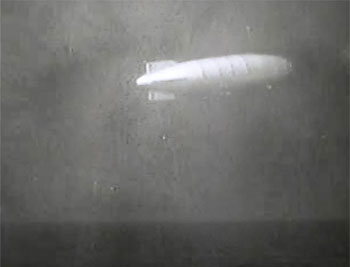 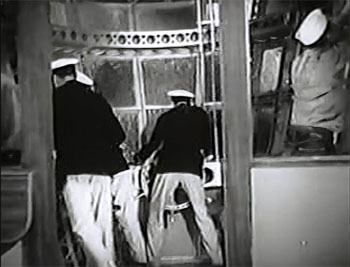 Above: Shots of the stormy dirigible flight to Nazil that provides most of the action in Chapter One.

The script has its flaws, though; the “climax,” with the heavies defeated without a fight, is a definite disappointment. The writers also fail to provide a convincing reason for the Eagle’s masquerade, a gimmick which seems to have been incorporated in a half-hearted attempt to give the serial a mystery element in order to justify its title. The serial’s other subplots are handled with much greater skill–the reporter McGuire’s undercover pose as Manuel’s cook, Skeeter’s crush on Casmetto’s daughter Dolores, Garcia’s designs on the same girl. There are also plenty of enjoyably humorous touches sprinkled throughout the script, among them Tommy and Skeeter’s puzzlement when they first hear of Nazil (Skeeter: “Sounds like a sneeze”), their attempt to deceive some rebel soldiers with magic tricks, and the gluttonous Manuel’s obsession with hot dogs.

The serial’s action scenes feature some of the best aerial stuntwork in any chapterplay; the multiple airplane dogfights and aerial dives and loops are filmed with more fluidity and a greater sense of breathtaking height and depth than the similar scenes in Universal’s earlier outing Phantom of the Air, and make very little use of stock footage when compared to the flying scenes in the first Tommy outing. Surprisingly for an early Universal, the dogfights are also quite violent, with multiple heavies being downed by the unerring machine-gun fire of the Eagle or–in one instance–by grenade-chucking on the part of Tommy himself. A few of the aerial highlights include the lengthy and exciting dogfight between Tommy’s plane and a rebel aircraft in Chapter Two (with the Eagle joining the fight), the airborne escape from Manuel’s headquarters in Chapter Six, a bombing raid on Curtis’ oil field and Tommy’s subsequent battle with the raider, Garcia’s one-on-one combat with the Eagle, and the aerial assault on Manuel’s headquarters in the face of the villains’ anti-aircraft guns. “Air Ace Frank Clark” (to quote the credits), a real-life flyer, seems to have performed most of the stuntwork in these and other scenes, and probably assisted director Ray Taylor in staging them as well. 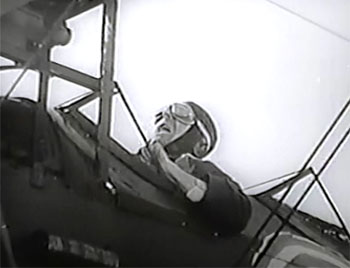 Above: Shots from one of the Eagle’s dogfights with a rebel plane.

The aviation scenes form the bulk of the serial’s action; grounded combats are much rarer and also less intense, with the only protracted gunfight sequence (the all-out infantry attack on the oil field in Chapter Eight) being very well-staged but largely bloodless. The good guys’ several escapes from Manuel’s dungeons provide some good chases, but the only noticeable fistfight on hand is the entertaining battle in the motorboat in Chapter Eleven. Both aerial and non-aerial action scenes are backed by pleasant locations, lightly-wooded plains (possibly the China Flats area) providing a backdrop for most of the outdoor action while Universal’s impressive Spanish hacienda (also seen in Red Rider) and other Latin-looking buildings feature in indoor scenes. The serial’s aircraft provide additional picturesqueness, with both the eagle-themed plane of “El Condor” and the villains’ leopard-marked aircraft being quite visually distinctive.

The attack on the oil field in Chapter Eight.

Cliffhanger sequences tend to center chiefly around plane crashes, with the heroes improbably surviving some crackups but more plausibly bailing out in other resolution scenes. The Chapter One dirigible wreck in the midst of a vicious storm makes a memorable cliffhanger and features some good miniature work; the same can be said of the Chapter Two ending that has our heroes crashing into a volcano. Other chapter-ending highlights include Tommy and Skeeter’s unwitting plane ride with a time bomb aboard (as Betty Lou and McGuire race to warn them), their near-drowning in a dungeon, and Tommy’s unwitting bombing of Manuel’s arsenal with Skeeter and Betty Lou inside it.

Above: The Chapter Two crash into the volcano.

Clark Williams, as Tommy, is more serious and less boyishly enthusiastic than Maurice Murphy’s version of the character in the first serial, but such maturation seems like a logical growth of the character–although it also makes Williams seem blander than his predecessor in the part. He’s likably chipper and suitably heroic, but most of his scenes are stolen by his more colorful co-star Noah Beery Jr., the only major returning cast member from the first serial. While Beery’s character also seems more mature and less naïve this time out, he’s still memorably quirky, drawlingly delivering comedic lines and utilizing some very funny facial expressions.

The lovely Jean Rogers is enchanting as Betty Lou, delivering her lines with appealing vivacity and displaying both warmth and spunky energy throughout. However, attractive and likable as she is, she rarely seems like the same character as Patricia Farr’s Betty Lou in the first Tailspin Tommy serial; Farr’s Betty was a wryly down-to-earth and at times almost cynical working-girl, while Rogers comes off as an upper-class debutante. Secondary heroine Delphine Drew, as Dolores Casmetto, has less screen time than Rogers, but is very pretty and delivers a likable low-key performance; her interactions with Beery are especially enjoyable. Former silent star Bryant Washburn, as Rogers’ dapper and businesslike uncle, has prominent billing but virtually nothing to do. Harry Worth, usually a slickly heartless villain, plays surprisingly well against type as Drew’s father, giving his character both fatherly affability and a refined patrician graciousness.

Above: Bryant Washburn and Jean Rogers.

James Burtis provides some fine comic relief as the wily Irish reporter McGuire, affecting an amusing empty-headedness when acting as Manuel’s cook but displaying considerable shrewdness behind the villains’ backs. Paul Ellis is also excellent as the double-dealing Garcia, suave and charming enough to deceive the good guys but always crafty-seeming enough to convey his true nature to the audience; he capably carries the bulk of the serial’s active villainy. Pat J. O’Brien (not the Warner Brothers actor) enters the action late as veteran flyer Milt Howe and combines cheerfulness and tough determination in proper measures–although he comes off as a little too talkative and outgoing to entirely match with Grant Withers’ laconic version of the character in the first serial.

Above left: James Burtis. Above right: Paul Ellis talks with Harry Worth (at left edge of shot).

Herbert Heywood and Matthew Betz spend almost all their screen time plotting at their headquarters, but their contrasting characterizations make their scenes interesting. The pudgy Heywood plays his role with a mixture of pomposity and nervous indecision, while the hulking, bullet-headed Betz snarls out his lines in confidently aggressive style; the eventual falling-out of their characters is not surprising, although the demise of one at the other’s hands seems to have been left on the cutting-room floor or else edited by later censors.

Manuel Lopez plays the field commander of Manuel’s army, who seems more soldierly than villainous (and who gets to display an unexpected but believable honorable side in the final chapter). Charles King pops up periodically as one of Lopez’s troopers, Slim Whittaker appears in the last two chapters as a crooked sea captain, William Desmond is the genially stalwart chief driller at the Curtis-Casmetto oil field, and Charles Browne reprises his role as Tommy’s kindly boss Paul Smith from the first serial in Chapters One and Two. Helen Brown is cast as Tommy’s mother this time around (appearing briefly in the first chapter), while Frank Mayo plays a dirigible captain.

Tailspin Tommy in the Great Air Mystery fails to rank among the most memorable of Universal’s early-1930s serials, lacking as it does the fierce gunfights and sense of continual danger that permeated Rustlers of Red Dog, the intense dramatics of The Vanishing Shadow, or the unusual emphasis on characterization of The Red Rider or the first Tailspin Tommy outing. However, it’s still one of the most pleasant serials of that era, a colorful and essentially light-hearted jaunt that provides a highly appealing mixture of action, adventure, and humor.

Above: Harry Worth (back to camera) toasts our young heroes and heroines (left to right: Jean Rogers, Noah Beery Jr., Delphine Drew, and Clark Williams) at serial’s end.

2 thoughts on “Tailspin Tommy in the Great Air Mystery”