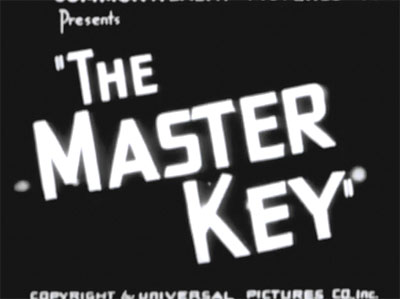 In 1938 America, a sinister group of Nazi agents is engaging in peacetime espionage; the spies’ field commander is Gerhard Doenitz (Addison Richards), but the group’s supreme leader is an unseen figure known only as The Master Key. The central cog in the Key’s schemes is the “Orotron,” a machine capable of extracting minerals from sea water; the Nazis hope to use it to create an unending supply of gold that can be regularly smuggled to Germany. The spy ring steals the Orotron and kidnaps its inventor, Professor Elwood Henderson (Byron Foulger), hoping to force him to supply the formula for the gas-powered tubes that power the machine–but Federal agent Tom Brant (Milburn Stone) and police detective Jack Ryan (Dennis Moore) are soon assigned to investigate the Nazis’ activities. The two investigators are aided by reporter Janet Lowe (Jan Wiley) and her news-gathering allies, a group of canny street kids led by one Migsy (Al LaRue). Janet, however, has her own private interest in the case–she hopes to protect her wayward half-brother Walter Stark (John Eldredge), a member of the spy ring. This goal puts her (initially) at odds with Brant and Ryan, but she eventually combines with them to thwart the Nazis and unmask the Master Key.

The Master Key is very dialogue-heavy, with over half of its screen time given over to characters reminding each other (and by extension, the audience) of who they are and what they’re doing, have done, or are going to do. However, its dialogue scenes–though too prevalent–are better-written than the serial norm; similarly, characterizations are sharper and performances more nuanced than in the contemporary chapterplays of either Republic or Columbia. The preceding comments could apply equally to most chapterplays from Universal’s final period of serial production (1943-1946)–but Master Key differs in a few important aspects from the majority of the other outings in the 1943-1946 group, and those differences serves to place Key several notches above its peers.

Master Key’s writers–George Plympton, Ande Lamb, and Joseph O’Donnell, with original story by Jack Natteford and Dwight Babcock–avoid the excessive and often tedious villainous infighting common to many other outings from Universal’s last years (The Royal Mounted Rides Again and The Scarlet Horseman particularly suffered from this syndrome). The villains in Key satisfyingly spend almost the entire serial engaged in direct conflict with the heroes, only lapsing into double-crossing to provide a rather disappointing–but not excessively damaging–twist for the final chapter. Most of Key’s internecine conflicts, however, take place in the good guys’ camp; the first four chapters have heroes and heroine cooperating but refusing to fully trust each other–an interesting approach that is well-handled by the writers, who manage to make the heroine seem sympathetic instead of wrongheaded, while also keeping us in full sympathy with the heroes.

Above: Jan Wiley verbally fences with Milburn Stone and Dennis Moore (backs to camera). John Eldredge is behind Wiley.

The writers also keep the serial’s story developing throughout its thirteen chapters, instead of focusing for too long on one static situation, another common pitfall in Universals of the time. The first four chapters have all the characters clashing in pursuit of the spy ring’s ex-member Walter Stark–the heroes seeking to capture him, the villains hoping to kill him, and the heroine trying to get him to go straight before it’s too late. The next four episodes have the good guys–now a united group–searching for the missing Professor Henderson, while the bad guys continue their gold-smuggling activities. Henderson escapes the spies in Chapter Eight but contracts amnesia in the process, sending both heroes and villains searching for him. After the scientist is located by the good guys in Chapter Nine, the final four episodes center around the villains’ attempts to keep the Orotron functional without the Professor, as the heroes slowly progress towards discovering the spies’ hideout and unmasking their leader. These periodical plot developments pace the narrative nicely, and give the serial a real sense of forward movement despite its emphasis on dialogue over action.

Above: Al LaRue (right) stumbles across the amnesiac Byron Foulger.

The mystery of the Master Key’s identity seems almost an afterthought on the writers’ part, with no characters really being designated as official suspects and the unmasking of the villain only coming after we’ve already learned the culprit’s identity. The character has no physical presence either, functioning merely as a disembodied voice–although the eerie-looking scenes of the Nazis sitting around a darkened table and receiving orders from a radio in their leader’s empty chair are visually memorable. The most unique thing about the villain, however, is the way the writers neatly and logically explain why the mystery villain’s voice is completely different from that of the character revealed to be the villain’s alter ego; this marks the only time in serial history that this oft-used misdirection device is actually acknowledged within the chapterplay’s narrative.

Above: Addison Richards (standing, back to camera) reports to the unseen Master Key.

The serial’s action sequences feature no lengthy Republic-style fistfight setpieces–even though regular Republic stuntmen like Tom Steele, Bud Wolfe, Dave Sharpe, and Dale Van Sickel execute most of them. Master Key’s fights, though quite well-staged by directors Ray Taylor and Lewis Collins, are uniformly brief and are usually ended after a minute or so by new plot developments or by a cliffhanger sequence; the lengthiest brawls are probably the Flamingo Club fight in the first chapter and the apartment fight in Chapter Ten. The serial’s chapter endings (a car crashing through the garage door, a car falling into a river, a car plunging from a highway bridge into the traffic below) are almost entirely culled from earlier Universal serials like Gang Busters and the two Green Hornet outings, but are integrated well into the new footage, and led up to in properly suspenseful fashion. One of the few original cliffhanger sequences is also one of the best–the Chapter Twelve ending, which features Milburn Stone’s apparent electrocution in the darkened tunnel leading to the villains’ hideout. 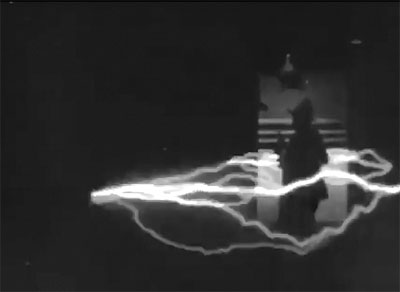 The serial’s locations are confined to the Universal backlot, but its capacious city streets lend quite enough variety and atmosphere to the proceedings; most of the action takes place at night, lending a slightly sinister urban ambience to the various settings. As always, Universal’s prop department does a fine job; the Orotron in particular is large, cumbrous, and complicated-looking enough (it almost looks like an early computer)  to seem capable of performing scientific wonders, unlike some of the small, tidy-looking, and rather unbelievably user-friendly MacGuffins seen in other serials.

The cast of Master Key is terrific, each of its members playing their parts with both skill and energy. Milburn Stone is very charismatic as the hero–blunt, tough, and self-assured, but also wryly cheerful and even amusingly excitable on occasion. As Stone’s trusty fellow-investigator, Dennis Moore shows more acting range than usual and delivers perhaps his best serial performance–rattling off tersely authoritative dialogue in that commandingly deep voice of his, but also delivering several wisecracks in sarcastically deadpan fashion.

The cool, sophisticated, and exceptionally attractive Jan Wiley easily handles her unusually challenging heroine role, managing to convey shrewdness, a slightly impish sense of humor, and calmly fearless determination. Addison Richards carries most of the serial’s villainy and makes a first-class heavy; his characterization exudes suavity and sharp intelligence, but also carries a continual undercurrent of sneering, arrogant menace behind it.

Glowering George Lynn provides Richards with strong backup as action heavy Herman, snarling viciously at the good guys, snapping brusquely at underlings, and generally giving the character an air of impatient ruthlessness. Dutch actor Roland Varno is much sleeker but equally sinister as the villainous scientist Hoff, while Joe Devlin appears throughout the serial as a background henchmen. Arthur Loft does the voice of the Master Key, delivering his lines in a menacing and measured tone rather different from his typically harsh but fast-talking manner.

John Eldredge does a great job as the shady, casually criminal, but surprisingly likable Walter Stark, deflecting criticisms from both his sister and his villainous associates with cynical cheerfulness. Perennial screen coward Byron Foulger plays very successfully against type as the mild-mannered but courageous Professor Henderson, defying the Nazis repeatedly despite his physical puniness. His characterization is so strong that we feel far more concern for his plight than for those of most other serial scientists.

Sarah Padden is enjoyably colorful as Aggie, the cantankerous but kind-hearted old shopkeeper who serves as a den mother of sorts for the street kids’ unofficial club. Future B-western star Lash LaRue, billed under his real first name of Al, does a good job as the boys’ tough and cagey leader–although he’s more than a bit too old for the part.  Scrawny Neyle Marx (billed as Neyle Morrow in several later serials like Congo Bill and Pirates of the High Seas) has an uncharacteristic tough-guy role as the swaggering and aggressive Spike, one of LaRue’s lieutenants; the more easy-going Jerry Shane plays the other leading member of the group. 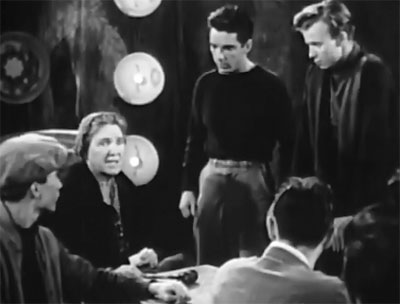 Above: Sarah Padden delivers a briefing for her intrepid band of youngsters; Al LaRue and Jerry Shane are standing at right; Neyle Morrow is seated on the far left.

Russell Hicks is his usual smooth but statesmanlike self as Police Chief O’Brien, while Maris Wrixon (an occasional leading lady to Gene Autry and Roy Rogers) has high billing but little to do as Hicks’ secretary. Ernie Adams has a delightful one-chapter role as Flash Faust, a jumpy little crook who’s most unwillingly pressed into the Master Key’s service; his facial expressions when George Lynn and Addison Richards are pressuring him are especially fun to watch, as he goes from irritation to nervousness to annoyed resignation. There are plenty of familiar faces among the serial’s other incidental villains–including those of Jack Rockwell, William Haade, Clifton Young, Bud Wolfe, John Merton, Pierce Lyden, Robert Barron, Gene Roth, and Dick Curtis–who has a memorably creepy bit as a gang doctor. Edmund Cobb pops up as a railroad switchman, Richard Alexander as a nightclub bouncer, George Chesebro as a sarcastic fireman, Edward Earle as a newspaper editor, and Forrest Taylor as a doctor.

The Master Key is no classic, but like most late Universals, it’s worth watching for its cast alone–and is made additionally entertaining by its unusually well-balanced and fast-moving storyline. The end result is one of the best and most consistently entertaining outings from Universal’s declining years.

6 thoughts on “The Master Key”