A gang of claim-jumpers, bank robbers, and rustlers, headquartered in their own town of “Red Dog,” are terrorizing the gold-mining boomtown of Nugget and the surrounding countryside; they have made it so fatal to wear Nugget’s marshal’s badge that no one is willing to take on the job of stopping them. No one, that is, except ex-lawman Jack Wood (John Mack Brown). Wood, “tired of fighting other people’s battles,” has retired from town-taming and plans to settle down, but after clashing with the rustlers when they attempt to steal a wagon train’s gold shipment, he agrees to become marshal of Nugget and sets out to break the power of the rustlers’ daring leader, Rocky (Harry Woods). Though outnumbered in his war with The Rustlers of Red Dog, Wood isn’t alone; he’s backed by two roguish but completely dependable partners: a scout named Laramie (Raymond Hatton) and a shotgun-toting gambler called the Deacon (Walter Miller).

Rustlers of Red Dog was the first of Johnny Mack Brown’s four Western serials for Universal; while the members of the quartet have much in common, Rustlers is generally rated as the best of the four. Your author has a slight preference for Brown’s second Universal outing, Wild West Days, but there’s no question that Rustlers is an excellent chapterplay, one of the very best of all Universal’s pre-1936 serials. It moves quickly and features a succession of action scenes unusually intense for an early Universal outing, while its writers (George Plympton, Basil Dickey, Vin Moore, Ella O’Neill, Nathaniel Eddy, and Nate Gatzert) do a truly outstanding job of developing and individualizing the leading characters.

Rustlers’ plotting is simple and somewhat repetitive; the entire first half of the serial has Jack Wood and his pals battling Rocky’s gang over the wagon train’s gold shipment, with multiple Indian attacks thrown in to prolong the struggle. The second half of the serial has Wood, after being appointed marshal, countering successive attempts by Rocky to loot the town of Nugget, with Indian encounters still providing intermissions to the lawman-outlaw duel. This very basic storyline remains completely involving throughout the serial’s twelve chapters, however–thanks to the strength of the serial’s characterizations. The raffish antics of Laramie (like charming saloon girls with his harmonica) and Deacon (like fleecing the saloon’s male denizens at poker), Jack Wood’s reluctance to take on a new marshaling job, heroine Mary Lee’s (Joyce Compton) initial discomfort with Wood’s deadly gunfighting prowess, the conflict between Rocky and his surly henchman Buck (Edmund Cobb), the grudging mutual respect shown by hero and villain, the camaraderie displayed by the three heroes, and the surprising esprit de corps displayed by most of the outlaw band–all these and many other character-based touches add immeasurable interest to the proceedings.

Above: Rustler boss Harry Woods solicitously tends to a dying follower, in one of the serial’s most unexpected and interesting displays of characterization.

Rustlers’ dialogue is also above-average; its script is full of colorful slang, grimly humorous quips, and impressive put-downs. Lines like “This game’s over for me, gentlemen; I’m drawin’ cards in that other” (Deacon, leaving the poker table to join his friends in a prospective gunfight), “There’ll be five names missin’ when the roll is called up yonder in Red Dog” (Laramie, after wreaking havoc on the rustlers in a shootout),  and “From now on you walk careful and speak softly, or I’ll fix you so you won’t do either” (Rocky, to the loud-mouthed Buck) abound, giving the serial a vivid pulp-western flavor.

This pulpish atmosphere is further enhanced by the unexpected realism of the action scenes; while most other 1930s Universal Western chapterplays downplay fatal violence (and try to avoid having the hero shoot anyone but faceless background Indians), Rustlers features many scenes of Indians, outlaws, and Nugget citizens biting the dust–and also allows its protagonist to justify his trouble-shooting reputation by definitively plugging multiple heavies. Most of these satisfying shootouts are staged (by director Lew Landers) in the rolling plains and rocky hills of the Kernville area, although Bronson Canyon and its cave also figure in a few scenes. Universal’s own fort set and Kernville’s Western street are present as well. 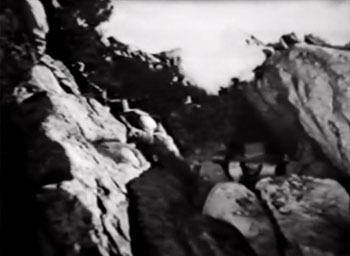 Above: Shots from one of the gun battles in the Kernville hills.

Among the action highlights are John Mack Brown’s one-on-one battle with an Indian in Chapter Three, Brown’s shootout with the rustlers in Chapter Seven in the yard of the Lees’ cabin, the battle between lawmen and outlaws in the Kernville rocks in Chapter Eight, the subsequent fight on the Kernville suspension bridge, and the very lengthy saloon brawl between Brown and Harry Woods in Chapter Nine (Cliff Lyons doubles Brown here and elsewhere, while George Magrill, Wally West, and Frank McCarroll also contribute).

The massive Indian attack sequence that bridges Chapters One and Two also works well, despite being partially composed of silent-film stock footage as per the Universal norm; the unusually large number of extras (both Indians and pioneers) on hand in the new footage helps the obviously high-budgeted silent shots to match better here than in many subsequent Universal outings. The same holds true of most of the other Indian battle scenes, although it’s a bit bothersome that the same piece of stock footage (an Indian being shot through a cabin window) pops up in two different chapters.

Above: An Indian who dies several identical deaths.

Rustlers’ cliffhanger scenes range from low-key (the Indians’ grim advance on the protagonists that closes Chapter Four, the shooting in the darkened saloon at the end of Chapter Nine) to spectacular (the bridge collapse in Chapter Eight, the horseback fall from a cliff in Chapter Eleven). “They lived through it” resolutions are less common here than in other Universal serials, but they still pop up from time to time, undercutting otherwise memorable perils like the aforementioned horseback fall or the explosion in Bronson Cave in Chapter Five. 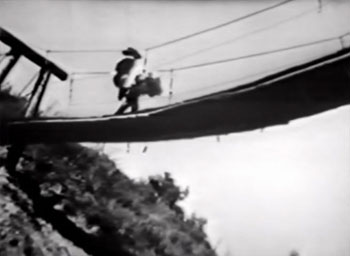 Above: Shots of the bridge-collapse sequence in Chapters Eight and Nine.

Rustlers’ cast handles its lively script with flair and skill. Star John Mack Brown is likably earnest and free of self-consciouness throughout, bringing dignity and complete conviction to his lines whether he’s confronting outlaws with soft-spoken seriousness, kidding with his pals, humbly shrugging off praises, or courting the heroine in gentlemanly fashion. Harry Woods is excellent in the unusually complex role of Rocky; although the character is utterly callous about the victims of his crimes, he’s also shown to have considerable courage, a sense of humor, and a genuine affection for his own followers. Woods plays the rustler boss with an ideal combination of swaggering self-assurance and crafty wit, dominating the serial when on-screen. 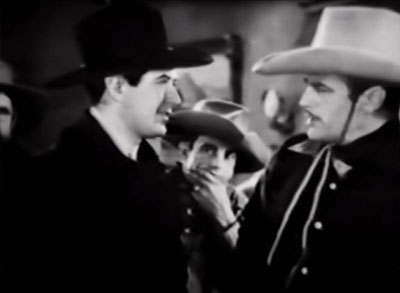 Above: John Mack Brown and Harry Woods confront each other in the saloon.

Sidekicks Raymond Hatton and Walter Miller are a delight to watch as Laramie and Deacon; Hatton’s disreputable slyness and irrepressibly cocky manner (contrasting amusingly with his bantam-weight appearance) helps him steal many scenes, but Miller’s tongue-in-cheek suavity and poker-faced mock dignity gives him plenty of competition in that department. Both characters are allowed to be tough and intelligent as well as funny, providing good support for the hero in action scenes and frequently taking the initiative themselves in tight situations.

Above: Raymond Hatton and Walter Miller.

Kentucky-born blonde Joyce Compton, who spent most of her screen career playing pretty but bubble-headed comic-relief characters, is given a rare leading lady turn here. Although her character’s attempts to “help” the hero by rushing into danger become annoying at times, her ladylike but chipper personality, good looks, and delightful Southern accent are all so appealing that she remains likable throughout.  Charles French puts both dignity and energy into his turn as Compton’s civic-minded banker father, while Lafe McKee as her uncle has little to do before being wounded and sidelined for the rest of the serial. 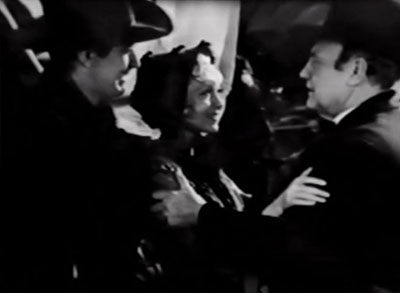 Fredric McKaye is very good as Rocky’s second-in-command “Snakey,” coming off as more vindictive and hot-tempered than his boss, but just as tough and cunning. Edmund Cobb is properly surly as the rebellious rustler Buck, while Bud Osborne, Hal Taliaferro, Jim Corey, Horace Murphy, Monte Montague, Slim Whittaker, Jack Rockwell, Artie Ortego, and Al Ferguson are among the supporting members of the large and colorfully rough-hewn outlaw band.

Rustlers of Red Dog’s strong characterizations, and its combination of typically good Universal production values with atypically fierce action scenes, make it one of the best chapterplays produced by Universal in the pre-Flash Gordon era (1930-1935), and probably the best Western serial from that period (although The Red Rider, also directed by Lew Landers, is another strong claimant for that title). Rustlers also compares favorably to Universal’s Western serials from the second half of the 1930s; many of them surpassed it in terms of plotting and profited from increasingly refined filmmaking techniques, but few of them matched its vigorously rough-and-ready frontier atmosphere. 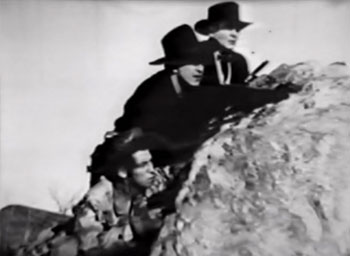 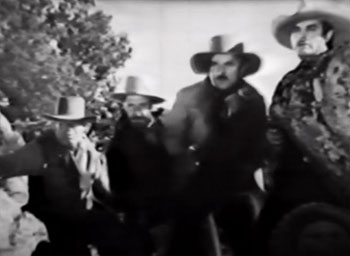 Above: Heroes Raymond Hatton, John Mack Brown, and Walter Miller (above left) face off against heavies Monte Montague, Hal Taliaferro, Al Ferguson, and Harry Woods (above right) in the rocks of Kernville.

7 thoughts on “The Rustlers of Red Dog”