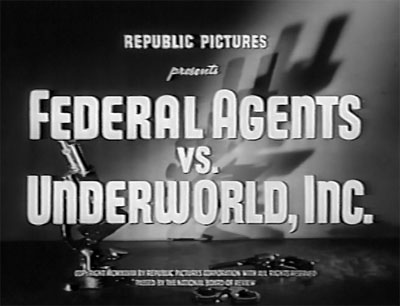 A Middle Eastern criminal named Nila (Carol Forman) and the American gangster Spade Gordon (Roy Barcroft) are in hot pursuit of one of the Golden Hands of Kurigal, an artifact recently discovered by the Clayton Archeological Expedition in Nila’s home country of “Abistahn.” Nila already possesses one of these hands, which are the keys to the location of the treasure of the ancient ruler Kurigal; the villainess hopes to use this treasure not only to make herself ruler of Abistahn, but also to incorporate the American underworld into one vast organization. Nila and Gordon kidnap Professor Clayton (James Craven) and begin menacing Clayton’s associate Williams (Bruce Edwards) as well, hoping to obtain the Golden Hand; unfortunately for them, Federal agent Dave Worth (Kirk Alyn), is assigned to investigate Clayton’s disappearance. The battle of Federal Agents vs. Underworld Inc. winds up taking Worth and Clayton’s secretary Laura Keith (Rosemary LaPlanche) from the United States to Abistahn, where Nila’s mad dreams of power are finally crushed.

Federal Agents vs. Underworld Inc., despite its clumsy title, is one of the best Republic serials from the studio’s declining years–thanks largely to its script, which consistently introduces unexpected twists and keeps the narrative from degenerating into the tediously similar series of duels the title seems to promise. A major character is revealed as a secret villain in Chapter Three and killed off in Chapter Six, the missing Golden Hand is discovered in Chapter Seven, and the action shifts from America to Abistahn in Chapter Ten–which also introduces another unexpected heavy. Such a continually developing plotline stands in strong contrast to the episodic and repetitious stories in most of Republic’s post-war chapterplays, although plotting of this kind was fairly rare even in Republic’s Golden Age serials.

The writers also give the serial additional appeal by centering the hero-villain struggle around an ancient (and foreign) treasure instead of bland technological MacGuffins; the Abistahni tomb and its trappings (particularly the mammoth statue of Kurigal) lend plenty of color to the last three episodes of the serial, while other minor touches–like Nila’s various exotic drugs or the eclectically Eastern trappings of her stateside lair–enhance the standardized cops-and-robbers proceedings in the earlier chapters.

Above, left to right: Rosemary LaPlanche, Bruce Edwards, James Craven, and Jack O’Shea watch as a pair of native diggers make an important excavation in the ancient tomb of Kurigal.

The only problem resulting from this combination of the G-man and farflung-treasure-hunt genres is the damage it does to the plausibility of the villains’ harped-upon scheme for taking over the American underworld; such aspirations seem highly unlikely–and comparatively unambitious–for a foreign would-be despot like Nila. The references to the planned “Underworld Inc.” seem to be included merely to justify the serial’s title; the writers would have been better off keeping Nila focused on ruling Abistahn and jettisoning the awkward and misleading title for a better cognomen (The Golden Hands of Kurigal, the title of the feature version released in the 1960s, would have fit the original serial nicely).

Federal Agents is full of the unspectacular but slickly staged action scenes typical of Republic’s later days, courtesy of director Fred C. Brannon. While there are several indoor brawls in warehouses or apartments, there are also a respectable number of outdoor fights and shootouts–admittedly filmed no further afield than the Republic backlot, but still providing visual variety. The Abistahn sequences give rise to some welcome filming in the Republic cave set–and in the wilds of Iverson’s Ranch, which, as in earlier Republic serials like Perils of Nyoka, serves as a believable stand-in for Middle Eastern terrain. 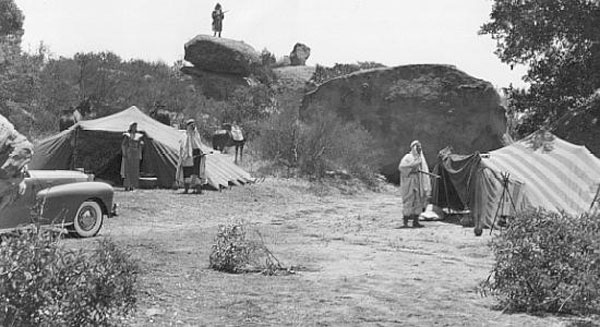 Above: Nila’s encampment in “Abistahn” (actually, at Iverson’s).

Some of the action highlights include the fight in the blazing office in Chapter One (a sequence augmented by stock from Dick Tracy vs. Crime Inc. but also boasting some new and threatening-looking fire footage of its own), the nighttime alley fight and the subsequent shootout in a maze of warehoused crates in Chapter Two, the shootout and fight at the chemical company’s loading platform in Chapter Four, the storeroom fight in Chapter Six (one of the most elaborate combats in the serial), the fight outside the tomb in Chapter Ten, and the climactic battle in the tomb itself in the final chapter. Dale Van Sickel doubles star Kirk Alyn in these and other sequences, while Tom Steele stands in for Roy Barcroft and Dave Sharpe doubles sidekick James Dale (and incorporates a few acrobatics into the fight scenes). Johnny Daheim, Bert LeBaron, Ken Terrell, Loren Riebe, Duke Taylor, Bud Wolfe, and Joe Yrigoyen also participate in various action sequences, while also taking (as do Steele, Van Sickel, and Sharpe) one or more turns as gangsters or Abistahn natives. 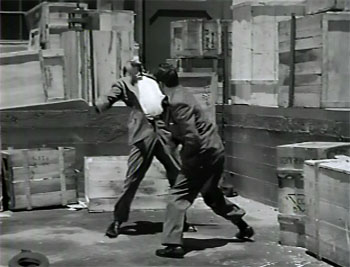 Most of the serial’s large-scale cliffhangers–the car-ambulance crash at the end of Chapter Three, the bridge explosion at the end of Chapter Nine–are derived from earlier Republic serials, but all of them are very well-integrated into the new footage, particularly the bridge collapse (from Adventures of Captain Marvel) that closes Chapter Eleven. The new chapter endings are less ambitious in scope, although some of them are memorable–particularly Carol Forman’s apparent point-blank shooting of Alyn in Chapter Eight, heroine Rosemary LaPlanche’s fall into the path of Kirk Alyn’s speeding car at the end of Chapter Seven (this one is only half-new, making partial use of footage from Daughter of Don Q), and the suspensefully set up Chapter Five ending that has Alyn about to open an explosive box as LaPlanche (bound and gagged in an adjacent closet) tries desperately to warn him.

Above: The Chapter Five cliffhanger. Bruce Edwards presents Kirk Alyn with a booby-trapped box (top left), Rosemary LaPlanche makes a vain effort to alert the hero (top right), the camera shows us the box’s lethality (bottom left), and an explosion engulfs the scene at the fadeout (bottom right).

Federal Agents’ cast is full of serial stalwarts, most of whom go through their paces in very engaging fashion. Kirk Alyn makes a strong and very likable hero, barking out typical G-man commands authoritatively but also giving a roguishly humorous twist to lighter dialogue, particularly the various wisecracks he bounces off the villains (“Burning old love letters, Gordon?” he quips delightedly in one scene, upon discovering Roy Barcroft’s character destroying evidence). 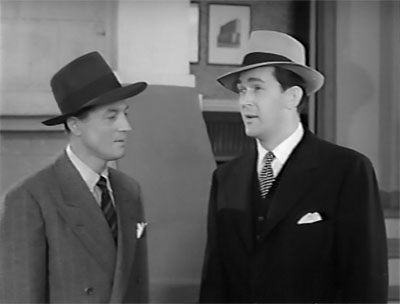 Above: Kirk Alyn reflects; James Dale is at left.

Former Miss America Rosemary LaPlanche has a somewhat larger role in the proceedings than most latter-day Republic heroines, and provides an exceptionally decorative presence even when functioning as a mere office aide. Her acting, though rather on the subdued side in comparison with Alyn’s, is quite pleasant as well. James Dale, as Alyn’s partner Evans, is the blandest major cast member; he delivers his lines competently and is likable enough, but is unable to convey much personality.

Carol Forman and Roy Barcroft make an ideal team of villains, her aristocratic arrogance and his down-to-earth cynicism contrasting neatly. The plotting scenes between the two, with Forman haughtily but fervently outlining her schemes and Barcroft sarcastically drawling out rejoinders, are very entertaining to watch.

Above: Roy Barcroft and Carol Forman

Bruce Edwards, a underenergized but likably easygoing hero in Republic’s earlier serial The Black Widow and a similarly likable second lead in several of their B-westerns, plays against type surprisingly well as the nervous, shifty, and unpleasant Professor Williams. James Craven is memorable as the urbane and resourceful Professor Clayton, nearly stealing the serial’s concluding chapters.

Most of the serial’s character roles are filled by the stunt team, but Tristram Coffin has a nice bit as a smoothly crooked lawyer, while Marshall Reed can be seen briefly as a police detective and Bob Wilke appears even more briefly as an Abistahni pilot. Jack O’Shea is quite convincing as the Abistahni digger Ali, an important figure in the later chapters.

Federal Agents vs. Underworld Inc., with its good cast and its swift-paced action, would have been enjoyable to a Republic buff in any circumstances, but would not have stood out from its contemporaries without its unique script. The twisty plotting in Federal Agents makes it one of the most rewarding and most interesting of Republic’s later cliffhangers; the writers’ work would have been unusual enough in earlier Republic chapterplays, but comes as even more of a pleasant surprise in a serial from the late vintage of 1949.

Above: James Craven with one of the priceless Golden Hands.