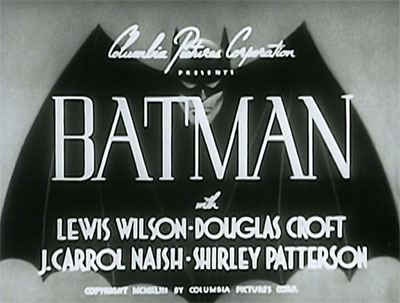 The Batman, mysterious costumed crimefighter, is actually Bruce Wayne (Lewis Wilson), who poses as a languid playboy to conceal his secret identity. Wayne and his ward Dick Grayson (Douglas Croft), aka Robin the Boy Wonder, are working on secret assignment from the government to combat the espionage activities of Japanese spy and master scientist Dr. Tito Daka (J. Carroll Naish). The two masked heroes must evade the city police (who regard the Batman as a suspicious character), defeat Daka’s attempts to acquire a supply of valuable radium, and rescue the industrialist uncle (Gus Glassmire) of Wayne’s fiancée Linda Page (Shirley Patterson) from the Japanese agent’s clutches.

Batman has been the center of so much controversy over the years–both among serial fans and the general public–that it’s rarely been fairly evaluated. The liberties it takes with its iconic leading character continue to ruffle some of Batman’s more fanatical devotees, while its tenure as a pop-culture fad during the 1960s (when it played in marathon showings across the country, to the great amusement of hipster aficionados of “camp”) once caused many leading serial buffs (particularly Alan Barbour) to treat it as something of an embarrassment to the genre. Then there’s the unflattering depiction of the serial’s Japanese villain (and the narrator’s endorsement of the internment of Japanese-Americans), which for many years made the serial hard to find in uncensored prints and which still provoke indignant outbursts from some viewers.

Thankfully, Batman has been made available in a restored DVD print (ironically, by the Japanese company Sony), while the memories of its 1960s humiliation have begun to fade–which seems to be making it easier for fans to appreciate it. Its episodic plot puts it a few notches below its Columbia contemporaries, The Phantom and The Desert Hawk, but it’s definitely in the same league as those releases.

Writers Victor McLeod, Leslie Swabacker, and Harry Fraser improve a little on the then-established Batman comics formula by having the masked avenger working outside the law; this depiction makes much more sense than the comic-book presentation of Batman as a fully-accredited police officer who operates in the open. Batman is periodically referred to here as a secret government agent (no doubt to skirt Production Code disapproval), but while unlikely, this scenario is not as silly as the one presented in the comics.

Above: Lewis Wilson and Douglas Croft phone in some information to the continually one-step-behind Charles Wilson (in uniform) and Al Hill.

The serial’s standard wartime storyline is enlivened not only by the use of masked heroes but by other colorful touches–particularly Daka’s “zombies” (scientifically mind-controlled henchmen), a radium-powered ray gun, and the villains’ hideout in an amusement park’s tunnel of horrors. As for the storyline itself, while it follows the same formula as other World War Two serials (pitting heroes against villains in a loosely connected series of sabotage and espionage capers), the writers do give the story some cohesion through the use of two continuing threads–the search for Linda Page’s uncle Martin Warren and Daka’s repeated attempts to obtain a radium supply.

The serial’s fight scenes are energetically and effectively staged by director Lambert Hillyer, a veteran helmer of B-westerns; they’re not as polished as the fights in contemporary Republic serials but are nowhere near as chaotic as the brawls in earlier Columbia serials like Captain Midnight. Eddie Parker doubles Lewis Wilson, while George Robotham stands in for Douglas Croft; George DeNormand also contributes to the action scenes. The fight at the dockyards in Chapter Nine–prefaced by an impressive entrance shot of Batman–is one of the highlights, as are the fight in the office in Chapter Two, the one on the railroad trestle in Chapter Three, the one in the second-story laundry in Chapter Seven, and the series of fights in the mine in Chapter Eight; several of these are opened in entertainingly dramatic fashion by having Batman and Robin leap through windows or skylights to confront the heavies. 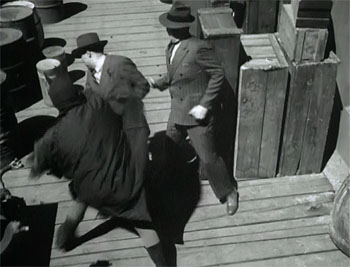 Above left: Batman makes a dramatic entrance before plunging into the dockyard fight sequence (above right).

While these and many other scenes are impressive, a few too many of them end with Batman getting knocked out so he can be put in peril for the chapter ending; a professional crimefighter really should win more fights, even if it requires some additional imagination on the part of the writers. The action sequences also carry with them the built-in absurdity of the youthful Robin holding his own against full-grown thugs– although to the credit of the director and the stunt team, the Boy Wonder is usually shown combating villains with acrobatic dodges rather than brute force.

The serial contains some good pieces of non-fistfight action, too–particularly Batman’s attempted high-wire escape (while carrying the unconscious Linda) in Chapter Two and his attack on the armored car with the aid of the radium gun in Chapter Four. The cliffhangers are stronger than usual at Columbia; in chapter endings like the armored-car crash (following the Chapter Four chase) or the explosion at the end of Chapter Eleven (which features some excellent miniature work), the action builds nicely up to the calamity and the peril doesn’t seem to come out of left field, as in so many other Columbia outings. Other good chapter endings include Batman and Linda’s plunge from the electrical wire at the end of Chapter Two, the fire cliffhanger at the end of Chapter Thirteen, and Batman’s apparent fall into Daka’s alligator pit in Chapter Fourteen.

Above left: Our hero and heroine about to take a plunge during the electrical-wire escape. Above left: Batman trapped in the Chapter Thirteen fire.

Most of the action takes place in or on the darkened city streets, dockyards, city rooftops, and apartment buildings of the Columbia backlot; the same well-appointed sets were being used concurrently in the studio’s Whistler, Boston Blackie, and Lone Wolf features, and they give added production value to the serial as well as creating an urban ambience appropriate to the Batman character. Wayne Manor is also convincing (both exteriors and interiors), while Columbia’s various cave sets serve well as the entrance to Daka’s headquarters, Batman’s “Bat’s Cave,” and the radium mine that figures in the chapter’s mid-section; the trip to said mine also takes the characters briefly out into the wilds of the Iverson’s Ranch country. 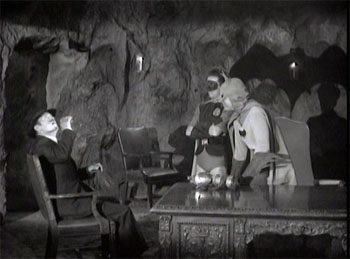 Top left: a disguised Batman and Robin on a mean street outside a spy hideout. Top right: Batman and Robin intimidating a henchman (Stanley Price) inside the “Bat’s Cave.” Bottom left: Robin grappling with a heavy (George Chesebro) on a Gotham City rooftop. Bottom right: Alfred introduces Linda Page to “Chuck White” (Batman in another disguise) inside the Wayne mansion.

Lewis Wilson, a stage actor whose screen appearances were relatively few, makes an excellent lead, despite the handicap of a less-than-impressive Batman costume. His polished-sounding mid-Atlantic accent suits him well as the suave but aristocratically disinterested Bruce Wayne, and also gives a haughtily authoritative and slightly menacing tone to his dialogue delivery as Batman; he’s equally effective when Bruce Wayne is posing as the decidedly un-polished ex-pug “Chuck White.” Like Reed Hadley as Don Diego/Zorro in Zorro’s Fighting Legion, Wilson in his multifaceted role manages to convey not only standard heroic toughness, but also a sharp intelligence–whether he’s humorously keeping up his lazy pose in front of the heroine or shrewdly questioning heavies.

Above: Douglas Croft and Lewis Wilson.

Sixteen-year-old Douglas Croft–the only age-appropriate actor ever to play the “Boy Wonder”–balances youthful enthusiasm with a likably savvy manner as Robin; his energetic performance, and the frequent rescues of Batman assigned to him by the writers, make him come off as one of the most useful of juvenile serial sidekicks.

Shirley Patterson is so stunningly beautiful as Linda Page that it’s hard to calmly evaluate her performance. However, her performance is very good indeed; she conveys heartfelt concern for her missing uncle, affectionate exasperation with Bruce Wayne, and breathless admiration for Batman with a warmth and sincerity that makes her screen personality just as appealing as her appearance.

J. Carroll Naish, a veteran character actor (and veteran ham) chews up the proverbial scenery as the evil Dr. Daka, delivering his lines in high-pitched and heavily-accented fashion and veering from stonily fanatical speech-making to oily sarcasm to giggling gloating as he goes about his villainy. His characterization continually threatens to become comical but never quite crosses the line into risibility; despite the extreme quirkiness of his performance (particularly when taunting prisoners or feeding his pet alligators), he remains a credible if decidedly offbeat menace–mainly because, unlike the hysterical heavies in Columbia’s James Horne-directed serials, he avoids petulant ranting and maintains a near-perpetual “cool,” no matter how eccentrically he behaves in other respects. 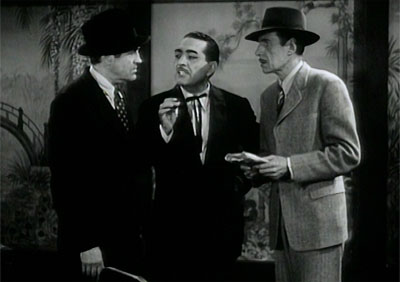 William Austin is good as Alfred the butler, who in this serial functions both as an assistant to Batman and Robin and as comedy relief. His nervousness and stereotypically British fussiness is perhaps a little overdone but is never too obnoxious or buffoonish; in fact, his excessively proper reactions to action provides some genuine laughs (as when he very politely informs the police via phone that he’s “being murdered” during a brawl). He’s also allowed to be of genuine help to the heroes on several occasions instead of simply serving as a bewildered butt of jokes.

Charles Wilson does an excellent job as Police Captain Arnold, gruffly making wisecracks about his men’s inability to capture either the Batman or the villains and even delivering a few sarcastic lines at his own expense. Charles Middleton almost steals Chapters Six, Seven, and Eight as mine-owner and prospector Ken Colton, delivering colorful frontier-style dialogue with gusto and craftily attempting to outsmart the villains. Gus Glassmire is dignified and sympathetic as the put-upon Martin Warren, although after he’s turned into a zombie in Chapter Three, he has nothing to do but walk around in a stupor untill being restored in the final episode.

The brusque and aggressive Robert Fiske serves as the serial’s action heavy in the first four chapters; after his demise, the slick and wily-looking John Maxwell serves as principal henchman for the rest of the serial. The villains’ ranks are filled by some extremely capable henchmen, among them Tom London, George J. Lewis, Jack Ingram, George Chesebro, I. Stanford Jolley, Karl Hackett, Lester Dorr, Warren Jackson, and Stanley Price. Kenne Duncan is an airplane mechanic placed under Daka’s mind-control, while Bud Osborne and Frank Shannon can also be seen as “zombie” henchmen.

Mauritz Hugo plays a doctor and Terry Frost a male nurse. Husky and tough-looking Al Hill is a police detective, Sam Flint pops up as a scientist, and Pat O’Malley appears as a cop. Earle Hodgins, that master of barker and medicine-show-proprietor roles, is as amusing as ever as the fast-talking and ballyhoo-spouting front man who operates the amusement park concealing Daka’s headquarters. Jerry Frank is the club-wielding “statue” who guards the headquarters entrance.

Topped off by a moody musical score that draws heavily on classical composers–particularly Wagner and Berlioz–The Batman is overall a satisfying serial. Its plotting is nothing special, but its acting is first-rate and its action scenes quite respectable, while its nocturnal big-city backdrop gives it a strong sense of atmosphere. The chapterplay is definitely one of Columbia’s better 1940s outings, and happily seems to be winning newfound respect from serial fans after spending long years being laughed at, censored, shunned, and dismissed.