The Phantom of the Air begins at an airplane show, where inventor Thomas Edmonds (William Desmond) is seeking to recruit a test pilot to aid in a new project; Edmonds, it seems, has developed a revolutionary gravity-defying chemical compound called “Contragrav,” which can power an airplane. Captain Bob Raymond (Tom Tyler), a pilot with the US Border Patrol, agrees to work with Edmonds on the project, but soon finds that the job entails more than mere flying: ace pilot and importer Mort Crome (the secret leader of a band of smugglers) knows about Contragrav too, and will stop at nothing to steal the valuable discovery. For the rest of the serial, Raymond must not only battle Crome’s smugglers in his Border Patrol capacity, but also protect Edmonds’ inventions from the gang–with the help of the resourceful Edmonds, Edmonds’ spunky daughter  Mary (Gloria Dea), and Edmonds’ remote-controlled and gun-equipped plane known as The Phantom of the Air.

Phantom of the Air is fast-moving and engagingly acted, but also a bit repetitive and thinly plotted; writers Basil Dickey, George Plympton, and Ella O’Neil do not provide a great variety of situations or story developments. Most of the serial either takes place in the air or at Edmonds’ desert laboratory, and most of the action scenes center around aerial dogfights, with only a few land-bound fistfights and shootouts scattered throughout the serial.

Above: The villains and Tom Tyler in one of the serial’s many airborne gunfights.

The majority of the aforementioned aerial battles feature Tyler and various henchmen blasting ineffectually at each other with pistols as they loop and soar through the sky; these scenes, like the rest of the serial, are smoothy directed by Ray Taylor, but they tend to feel tedious after the first four chapters or so. However, this tedium is often alleviated by some more interesting airborne moments– among them Tyler’s attack on a smuggling ship (during which he boards the vessel’s rigging from his plane), Gloria Dea’s climb from the “Phantom” plane to the unconscious Tyler’s out-of-control aircraft, Tyler’s motorboat-to-plane and plane-to-car transfer, and the head-on crash of Tyler’s plane with that of henchman Walter Brennan.

The cliffhangers in the serials are similarly aviation-centered; almost all of them feature the hero and/or the heroine crashing to certain death in damaged or sabotaged planes. One of the only (and hence one of the most memorable) non-aerial cliffhangers comes at the end of the second chapter, when a fistfight breaks out between hero and villains in William Desmond’s laboratory and causes the release of a container of poisonous gas. Speaking of Desmond’s laboratory, although a bit too many scenes take place there, it’s a very impressively furnished set that showcases Universal’s superior production values–complete with a complicated control board, a sliding door, and various other chemical and electrical apparatuses.

Tom Tyler’s is energetic, enthusiastic, and very likable as Captain Bob Raymond, making his character’s unconcerned attitude towards his many daredevil exploits seem completely unaffected and convincing.  Blonde-haired Gloria Shea is a perky, intelligent, and very attractive heroine, while William Desmond is a genial but commanding presence as her father. Australian character actor Sidney Bracey very good as Desmond’s loyal, zealous assistant Munson, giving a slight comic tinge to his part but never coming off as stupid or buffoonish.

LeRoy Mason is both believably suave (when affecting a good-guy pose) and suitably nasty (when barking orders at his men) as the villainous Mort Crome. Mason’s leading henchman is played by Craig Reynolds (billed here as Hugh Enfield), who plays a cowardly, nervous villain far removed from his later heroic character in Universal’s 1933 chapterplay Perils of Pauline (where he was billed as Robert Allen). Walter Brennan plays another one of Mason’s principal henchmen, and shows signs of his great character-acting talent even in this early and largely nondescript role, particularly in his shrilly indignant reaction to his head-to-head aerial crash with Tyler  (“That Raymond guy must be crazy—rammin’ his plane into me!”)

Above, from left to right: Monte Montague, Craig Reynolds, and a chuckling Walter Brennan get their orders from a seated LeRoy Mason (back to camera).

Al Ferguson, Edmund Cobb, Bud Osborne, Monte Montague, and Ethan Laidlaw, distinctive and dependable toughs to a man, fill out the ranks of Mason’s gang. Colonel Roscoe Turner, a famed real-life pilot, appears as one of Tyler’s Border Patrol colleagues, and presumably handles a good deal of the serial’s aerial stuntwork. Tom London is a Border Patrol radioman, and future star Dennis O’Keefe can be briefly spotted as a “dress extra” at the dance in Chapter One.

Phantom of the Air would undoubtedly have made a bigger hit with 1930s audiences–to whom aviation was still the stuff of romance–than it does with modern viewers. My readers’ affection for it will largely depend on their tolerance level for the repetitive aerial sequences; if they can sit through these scenes, they can take pleasure in the serial’s energetic acting, and in the congenial flavor of breezy 1930s adventurousness that permeates the action. 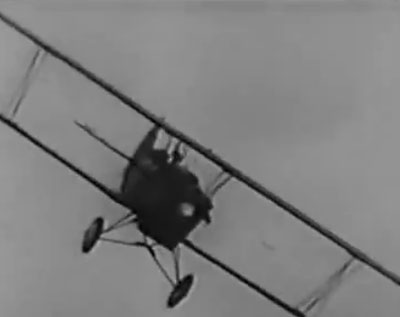 2 thoughts on “The Phantom of the Air”