Bruce Gentry–based on a short-lived but well-done post-war comic strip–begins in South America, where Bruce Gentry (Tom Neal), pilot and adventurer, is recruited by a US government agent (Dale Van Sickel) who needs to fly to the States in a hurry. After fighting off some thugs that were pursuing the agent, Bruce takes to the air with his passenger, who explains that he’s been gathering information on a plot, engineered by an unnamed foreign power and traitorous American fifth columnists, which has as its goal the conquest of North, Central, and South America. The weapon the would-be-conquerors intend to use shortly afterwards appears on the scene: a sinister flying saucer that heads for Bruce’s plane at an incredible rate of speed. Bruce escapes being hit by the strange projectile, though the heat waves it gives off cause some damage to his controls, and lands safely in the United States. Quite interested in this threat to the world, Bruce goes to consult his scientist friend Dr. Benson (Forrest Taylor) for his opinion on the source of the flying saucers, which are now being seen throughout the country. However, Benson is kidnapped by a gang of thugs led by Allen (Jack Ingram), despite Bruce’s attempts to stop the abduction; shortly afterwards, Bruce is sought out by Paul Radcliffe (Hugh Prosser), an aircraft engineer and industrialist, who is interested in solving the mystery of the flying saucers and in mass-producing the things in his factories for peace-time uses, and wants to enlist Bruce’s services in tracking them down. Bruce begins to investigate, and shortly afterwards locates the area that seems to be hiding the saucer’s testing grounds–the mountains and mesas adjoining the property of rancher siblings Frank and Juanita Farrell (Ralph Hodges and Judy Clark). In the meantime, Krendon (Tristram Coffin), the leader of the foreign agents, forces Dr. Benson to lend his scientific know-how to the perfection of the saucers, but Krendon’s subsequent attempts to get his hands on the necessary materials for the project are continually thwarted by Bruce Gentry, who, with the help of Radcliffe and the Farrells, begins to get closer and closer to Krendon’s boss, the mysterious spy leader who calls himself, “The Recorder,” and only communicates with his followers by means of pre-recorded tapes.

Bruce Gentry is a somewhat mixed bag, hampered as it is by many of the flaws common to the serials of its producer Sam Katzman’s serials. Its overlong chapter runtimes force its scripters (Joseph Poland, George Plympton, and Lewis Clay) to pad out its episodes with lots of empty dialogue (the good guys often spend a maddening amount of time discussing their next move), and needlessly desultory walks from point A to point B. Thanks to Katzman’s aversion to shelling out for miniature work, the much-discussed flying saucers (called “flying discs” throughout the serial) also prove a rather disappointing menace, since the villains are never seen using them to speed their projected conquest of the Western Hemisphere. A few montage sequences of the discs on a destructive rampage would have helped to make them seem more of a threat to the world; as it is, all we see the discs do is repeatedly blow up Bruce Gentry’s planes. The discs themselves are cartoons, done in the same elementary style as the animated effects in Katzman’s Superman, which doesn’t help their menace.

Above: A saucer, or disc, looking rather like one of Wile E. Coyote’s Acme purchases, heads for a surprised Dale Van Sickel and Tom Neal.

With these script and budget defects, it would be easy to write off Bruce Gentry as a dud–if it didn’t have multiple redeeming factors. Much of its strength is to be found in the action department; Gentry is one of the only Katzman serials in which former Spencer Bennet, Katzman’s perennial directorial warhorse, was given the opportunity to work with ace Republic stuntmen Dale Van Sickel and Tom Steele, his leading stuntmen during his days at Republic Pictures. The re-teaming of these three (and the contributions of co-director Thomas Carr, no slouch at handling action scenes himself) results in some inspired pieces of action that periodically hark back to the days of Bennet’s Republic outings like The Masked Marvel or Secret Service in Darkest Africa, although really lengthy fight scenes are few and far between (Katzman obviously didn’t want to waste too much shooting time on staging more than three or four extended and elaborate fistfights).

However, even the brief fisticuff bouts between heroes and villains are livelier than the typical Columbia action sequence of the period; punches are traded with real energy, and combatants leap or are flipped through the air with verve.  Van Sickel doubles hero Tom Neal in most fights, while Tom Steele doubles Tristram Coffin and, in some sequences, lead henchman Jack Ingram. In other scenes, Ingram seems to be doing his own stunts, while subordinate henchmen Terry Frost, Eddie Parker, and the unidentified actor playing the henchman “Hurst” appear to double themselves throughout. The last chapter is particularly action-packed, with an excellent and fairly long fight between Van Sickel and Parker, a shorter but equally good battle between Steele (doubling Hugh Prosser) and “Hurst,” a brief fight between Van Sickel and Steele on one side and Frost and Ingram on the other, and a long climactic fight between Van Sickel and Steele (standing in for the villainous Recorder).

Above: Dale Van Sickel makes a leap to start one of the last-chapter fights.

Chapter Nine features another terrific fistfight, with Van Sickel doing the same run-up-the-wall stunt he performed in Crimson Ghost as he battles a room full of henchmen including Frost and Steele (doubling Ingram). This fight culminates in Ingram’s hurling a chair at Neal, and, as the chair flies straight at the camera in one of director Bennet’s visual trademarks (but seldom seen in his Columbia serials), it’s easy to believe for a little while that we’re watching a Republic chapterplay from the early 1940s. Another great action scene (in Chapter Two) has Van Sickel and Steele chasing each other up, down, and around a gigantic derrick-tower; this sequence, shot on what’s obviously a genuine industrial site, recalls some of the wonderful Republic on-location chases from that studio’s late-1930s serials. 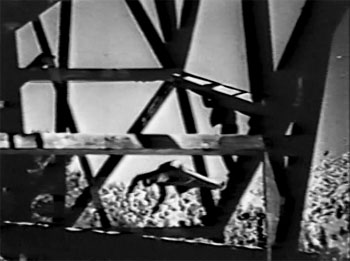 Despite having a pilot hero, Gentry is not that heavy on aviation action; the characters spend a lot of time flying to and fro, but the bulky cargo planes used throughout the serial make dogfights and other airborne stunts generally impracticable–although there is a short-lived but entertainingly unusual aerial duel between two of the jumbo-sized ships in Chapter Ten. The Chapter Eight aerial sequence, in which Bruce buzzes a car full of henchmen in his plane the air and then jumps from his vehicle to theirs, is also noteworthy; the sight of the plane swooping down at the car as the auto zips along a desert road is very striking, although Bruce’s jump (shown through quick cutting, not actual stuntwork) is unremarkable. 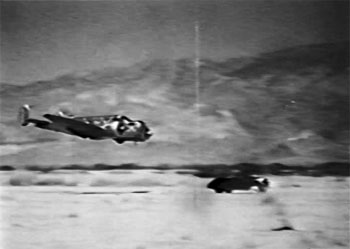 Above: Plane vs. car in Chapter Eight (left) and plane vs. plane in Chapter Ten.

The aforementioned desert road appears to be located at Lone Pine; that impressive region’s flatlands and rocky, mazy canyons alternate with the forested hills of the Corriganville ranch as the serial’s scene of action, giving good visual variety to the proceedings; Corriganville “appears” more often than Lone Pine does, but the latter (which serves as the villains’ mesa hideout) is featured prominently in the climactic chapters. Gentry also makes use of some good “genuine” locations, among them the enormous oil rig previously mentioned, the adjacent quarry/mine, and a waterway with an interesting floodgate. 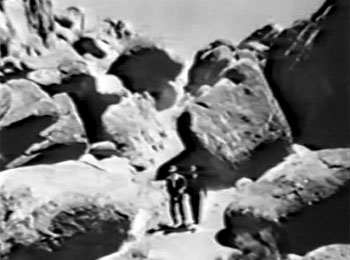 Above left: The villains chase Judy Clark down a road at Corriganville. Above right: Eddie Parker and Steven Carr trudge through a canyon Lone Pine.

The serial also features several cliffhangers that are staged and edited more dramatically than the norm at Columbia, where chapters so often culminate in abrupt and mundane fashion (the Chapter Fourteen knifing cliffhanger in Gentry being an example of this tendency). As mentioned, the Chapter Nine fall from the window in Chapter Nine is well-shot, while the Chapter 11 cliffhanger–which has heroine Judy Clark tied in the path of a runaway plane and menaced by its giant whirling propeller–is handled excellently. Other chapter-ending highlights include the cliffhanger in which another plane crashes head-on into a car containing Bruce, and the cliffhanger that has Bruce bailing out of his plane when a disc explodes it, only to snag his chute on a boulder and find himself suspended over a canyon as his parachute strings begin to break. 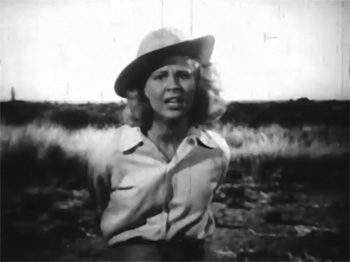 Above: Judy Clark is threatened by the oncoming propellor at the end of Chapter 11.

The cast of the serial has its minor weaknesses, but is pretty solid overall. Tom Neal is both authoritative and likable in the lead, but is somewhat less energetic than he was in Jungle Girl eight years earlier; however, he still displays the same gruff cheerfulness that he showed in that serial, and comes off as a convincingly tough and weather-beaten adventurer. Heroine Judy Clark, a former singer, seems a bit uncomfortable with extended dialogue scenes; though she’s quite pretty, and appealingly chipper in demeanor, she often looks either blank or awkward when delivering her lines. Ralph Hodges is similarly chipper but much more self-assured as her brother, engaging in some enjoyable bantering exchanges with her and with Neal, and livening up many scenes (although he does have a bit of dialogue trouble of his own with the over-lengthy piece of recapitulation in Chapter Fourteen; he looks like he’s about to go to sleep as he plods through it). 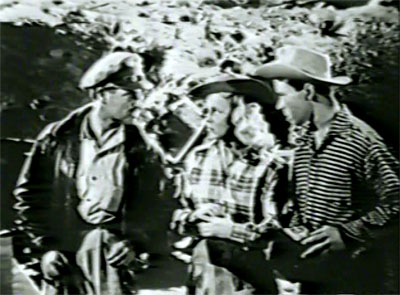 Tristram Coffin is his typically slick and confident self as the Recorder’s lieutenant, while Hugh Prosser, as in most of his Columbia serials, effectively combines affability with shiftiness; the audience remains unsure of what side he’s really on right until the last chapter.  Jack Ingram is as cranky and sarcastic as ever, and Forrest Taylor plays another of his beleagured but dignified scientist characters with his usual skill. Terry Frost, Charles King, and Eddie Parker are likewise stalwart in their various henchman parts.  An uncredited younger actor, previously misidentified by me as stuntman George DeNormand (see the comment section), also does a good job as the other regular member of the henchman pack, named “Hurst”; he may be a stuntman, since he appears to be doing some of his own action work, including the above-referenced last-chapter fight with Tom Steele standing in for Hugh Prosser.

Bruce Edwards, the hero of Republic’s The Black Widow, is reduced to a minor role as Coffin’s lab assistant, while Tom Steele and Dale Van Sickel play multiple character bits throughout the serial, as they did in Bennet’s Republic outings. Stephen Carr, brother of Thomas Carr, plays a sneaky minor villain as weakly as he did in Superman the preceding year; in his radio exchange with the extremely low-key Bruce Edwards, he manages to make the latter appear positively dynamic. The attractive brunette actress who appears as Hugh Prosser’s secretary is unfortunately uncredited.

While Bruce Gentry drags at times (like most Katzman Columbias, it would have been greatly improved had its chapters been both fewer and shorter), it ultimately holds together, and delivers a good deal more entertainment value than many of its Columbia contemporaries–thanks to a capable cast, good locations, and, most pertinently, the efforts of its directors and stuntmen.