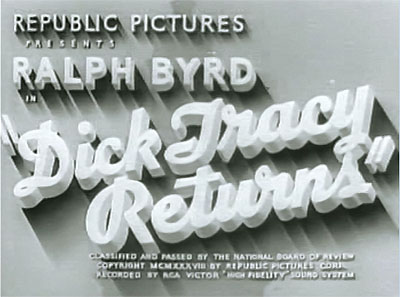 Dick Tracy Returns, like the preceding Dick Tracy, gives us a fifteen-chapter ongoing battle between Dick Tracy (Ralph Byrd), and a gang of criminals whose activities range from extortion to espionage. The gang is led by Charles Middleton as Pa Stark, and is comprised of his five sons: the swaggering, muscular Champ (John Merton), the knife-wielding Slasher (Jack Ingram), the foppish Dude (Jack Roberts), the sharpshooting Trigger (Raphael Bennet), and the aggressive, immature Kid (Ned Glass). Dick Tracy and his protege, new FBI agent Ron Merton (David Sharpe) are dispatched to round up the gang, but when Ron is mercilessly killed by the Starks following an armored-car heist, Tracy vows to bring the Starks to justice and smashes up their rackets one by one–causing the deaths of one Stark after another in the process. 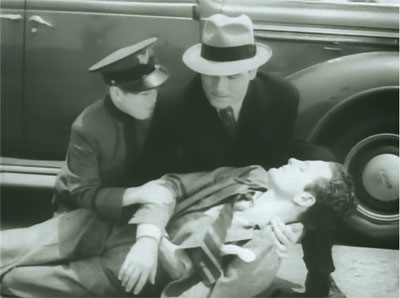 The screenplay of Dick Tracy Returns, by Barry Shipman, Franklin Adreon, Ronald Davidson, Sol Shor, and Rex Taylor, is similar enough to that of Dick Tracy (though only Shipman worked on the previous serial) to feel like part of an ongoing series, but different enough to keep from seeming like a rerun. The sequel has less of the vivid characterization and melodrama of  the original: interaction between the good guys is mainly on an all-business basis, with less time for kidding around or friendly chitchat; Tracy has no missing brother to fret over this time around; and the villains, while evil and ruthless, are not the freakish demons that Moloch and The Lame One were. However, the serial still has its emotional moments, particularly in Tracy’s fatherly interactions with the doomed Ron Merton and his sad but resolved determination to avenge his death. Additionally, the villains are given a slight human side that would be very unusual in Republic bad guys of even a slightly later vintage; though the Starks are completely unconcerned about any loss of life they cause to the world at large, they’re shown as being genuinely saddened when one of their family bites the dust.

Returns is faster-paced than Dick Tracy was–although not by much–and its myriad action scenes are far more smooth and “choregraphed” than similar sequences in the first serial–while still not as slick as fights and chases to come in the later serials of Returns’ directors, William Witney and John English. George DeNormand is on hand again, doubling for Ralph Byrd (with David Sharpe filling in on a few of the more gymnastic stunts, such as leaps from rooftops onto henchmen). The varying sabotage and invention-theft schemes indulged in by the Starks lead into many memorable fights and shootouts at railyards and dockyards, atop speeding trains, and aboard speeding motorboats. The shootout at the railyard in Chapter 3, with an escape by the Starks on a hijacked freight train, is a particular standout, as is the fight between Dick Tracy and Trigger Stark on a factory roof in Chapter 7. The last-chapter shootout at the Starks’ rock-crusher-yard hideout, with Tracy and his men taking cover behind moving dump trucks while the Starks fire at them from wooden platforms, is also memorable, one of the best climactic shootouts in any serial. 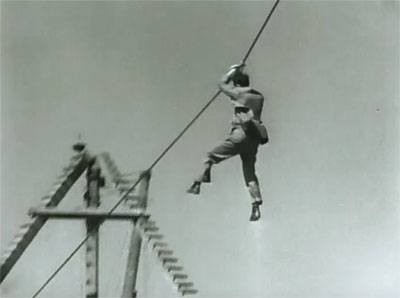 There are some excellent car chases in Dick Tracy Returns, too, and a great, foggy-night airplane sequence in the first chapter, with Tracy in a small plane zooming to the rescue of an airliner that is being led towards a crash by the Starks’ fake radio beam. The cliffhangers are a varied and memorable lot, and include Tracy being crushed by an enormous cement chimney (the Lydecker Brothers do excellent work with this and other miniatures) and Junior’s apparently being blown to bits by a briefcase bomb. 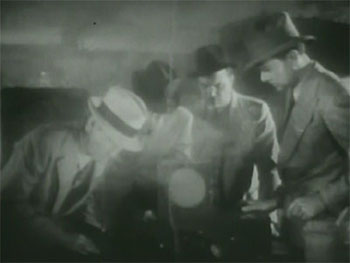 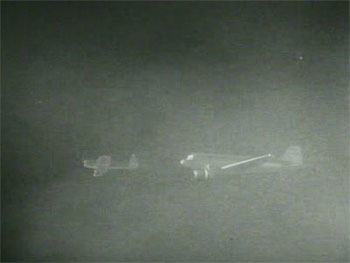 Above: Scenes from the foggy plane-rescue sequence.

Like Dick Tracy, Returns benefits immensely from extensive location shooting at actual factories, parking garages, dockyards, warehouses, and power plants around Los Angeles; there are also several impressive outdoor sequences shot out at Bronson Canyon. Only the scenes in Tracy’s offices and in the Stark gang’s headquarters are filmed on Republic soundstages, a far cry from later Republic outings in which most of the action takes place in warehouse or office interiors. 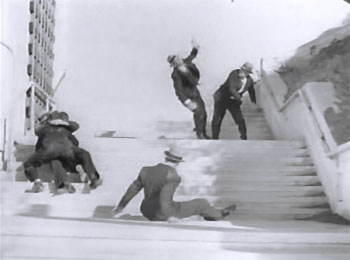 Above: Tracy and his men battle the Starks’ henchmen on the winding stairs of the Griffith Park Observatory, another of the serial’s real-life locations.

The serial’s acting is quite good, halfway between the dramatics of earlier Republic serials (the first Dick Tracy serial among them) and the stone-faced performances in later Republic cliffhangers like Secret Service in Darkest Africa. Ralph Byrd again makes Tracy seem almost superhumanly capable and self-possessed–but at the same time humanly worried and excited when facing danger or when attempting to save other people from danger. He also comes across as friendly and congenial even when he’s resolutely tinkering with microscopes in the crime lab and analyzing clues in walking-encylopedia fashion.

Charles Middleton, while not as flamboyant as he was in Flash Gordon, is nevertheless incredibly menacing as Pa Stark. As in his portrayals of Ming in Gordon and 39-0-13 in Daredevils of the Red Circle, Middleton gives a deranged and psychotic edge to his villain here, making Pa something scarier than a mere profit-hungry gangster. In Middleton’s hands, Pa’s grudge against Tracy for killing his sons comes off as maniacal hatred; his delight when he thinks he’s killed Tracy in a car crash at the end of Chapter 2, and his murderously insane confrontation with Tracy in Chapter 14, are particularly frightening. 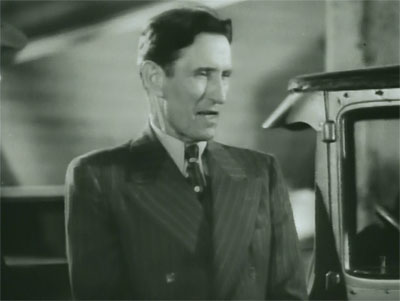 Above: Pa gloats about “evening things up for the Kid” as he prepares to kill Tracy.

The five actors who portray Pa’s progeny do an excellent job of individualizing each character with a minimum of dialogue. Ned Glass, practically unrecognizable if you know him only from his later days as a lovable, bald-headed eccentric in 1960s film and television, does a stellar job as Kid, the first to be killed off; he gives the character an agressive, hot-tempered edge, as if Kid is determined to make up for his youth by being tougher and meaner than any of his older siblings. The satanically-eyebrowed Raphael Bennett looks the part of the cold gunman Trigger Stark to a T, while Jack Roberts makes his character Dude live up to his name by displaying a dandyish reluctance to indulge in fistfights or activities that might mess up his suit. Jack Ingram’s cranky, snarling Slasher comes across as the smartest of the five Stark boys, generally taking the lead whenever Pa is not around and even suggesting plans when his father is present. John Merton’s Champ is the muscle of the family, affecting an excellent prize-fighter’s walk and showing a certain swaggering protectiveness of his younger brothers.

Lee Ford, who takes over the role of Mike McGurk in this outing, has been been subjected to universal criticism for his performance, but I think this is largely fallout from his incredibly obnoxious turn in the earlier SOS Coast Guard; he’s very unobtrusive in this serial, not getting anywhere near as much screen time as the first McGurk, Smiley Burnette. His comedy bits are weak–taking pratfalls during a fight scene, stammering confusedly when trying to deliver important information–but brief and insignificant.

Jerry Tucker as Junior has more screen time than Ford, and is a bit more annoying–although it’s the writing, not his acting, that’s to blame. Tucker looks too chunky and naive for the part of the tough ex-street kid Junior (Lee Van Atta was much more convincing in the first serial), but his lack of hard-boiledness wouldn’t be troublesome, if it didn’t come hand in hand with an irritating, script-imposed stupidity. Junior risks Tracy’s life twice in the serial by tagging along after being told not to, and doesn’t do anything to extricate himself from danger once he’s precipitated a bad situation. I can see why Republic chose to drop the Junior character from subsequent Tracy serials.

Michael Kent is likable if bland as Steve Lockwood, having none of the personality of Fred Hamilton, the first Tracy serial’s Steve. Pretty Lynne Roberts brings more individuality to her performance as Gwen Andrews, but has very little screen time compared to Kay Hughes’ Gwen in Dick Tracy. Dave Sharpe does a fine job as the young rookie Ron Merton, mixing intelligence with boyish enthusiasm, and making his death as sad to the audience as it is to Tracy.

The supporting cast, like that of most pre-1943 Republic serials, is a gold mine of dependable character actors. Forrest Taylor appears as a Navy Commander, James Blaine as Tracy’s superior Clive Anderson, former silent-serial hero Larry Steers as a debonair hit man called “The Duke”, and Alan Gregg as James “Snub” Madison, the Stark gang’s electrician. Carleton Young, Gordon Tracy from the first Dick Tracy serial, appears again here as a slick and villainous pilot. Croaking-voiced Gordon Hart is a crooked aircraft manufacturer, Bob Terry, Tom Seidel, and Reed Howes pop up members of Tracy’s G-man squad, and young John Archer (later a star and co-star in A-movies like Santa Fe and Destination Moon) is an ill-fated scientist. Pompous Harrison Greene and distinguished J. P. McGowan play foreign agents, Budd Buster  is a gas station attendant, Frank LaRue a doctor, and Eddie Dew a pilot. Arch Hall, later famous as a producer of “schlock” films, appears as a henchman who engineers the escape of Alan Gregg from a police hospital.

Dick Tracy Returns might lack the horror-movie touches, the spooky atmosphere, and most of the character touches of Dick Tracy, but its accelerated pacing and its sharpened production values easily balance out these losses. Though its plot is a mundane cops-and-robbers one, its strong hero, strong villain, and inexhaustible supply of varied action scenes make it fully as exciting as many serials possessing more fantastic subject matter.

Above: Tracy and his men in action (Lee Ford at far left, Michael Owen at far right, and Ralph Byrd, of course, in the center).