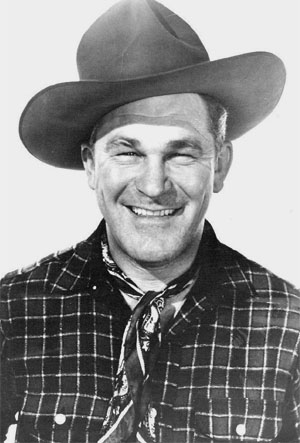 The gigantic Guinn Williams, best-known by the appropriate nickname of “Big Boy,” began his screen career as a cowboy star but shifted to character acting in the 1930s, enjoying a long and respectable career in both A and B features—principally Westerns. Although he played his share of heavies, Williams specialized in playing the hero’s tough, wisecracking, rambunctious sidekick. His serial roles—three in all—were all in this vein.

Guinn Williams was born in Decatur, Texas. His rancher father, a U.S. Congressman, earmarked him for a legal career, but the young Williams sought to become a baseball player instead. This eventually led to a rift between father and son, and Williams found himself on his own economically after leaving college. He worked as a cowboy and pursued other temporary occupations before arriving in Hollywood circa 1919. Some of his earliest screen work was a bit in a Will Rogers vehicle from that year, Almost a Husband; it was Rogers who gave Williams his enduring nickname of “Big Boy.” Williams’ riding ability and decidedly Texan appearance soon caught the attention of producers, and by 1921, after playing several bits and supporting parts, he was signed by the independent studio Aywon to star in a series of Westerns. Williams played the lead in multiple cowboy films for Aywon and other small studios for the next five years or so, but then began to gravitate towards character parts, working more frequently for the major studios in the process. The late 1920s and early 1930s found him playing major supporting roles in A-features for Warner Brothers (Noah’s Ark, My Man) and MGM (The Bachelor Father, The Great Meadow), as well as working in lower-budgeted films.

In 1933, Williams signed with little Mascot Pictures to co-star in the serial The Mystery Squadron. Oddly enough, despite Williams’ past success in Westerns, Squadron featured him as an aviator and not a cowboy—Bill “Jelly Bean” Cook, the easygoing pal of pilot Fred Cromwell (Bob Steele). Cromwell and Cook were hired by a dam construction company to battle a mysterious squadron of planes that was regularly assaulting a mountainous construction site. Squadron, like most of Mascot’s serials, was a very fast-moving and energetic cliffhanger, with a lively cast.  Williams brought plenty of deadpan humor to his role, whether he was making amusingly impractical suggestions (such as taking a “shortcut” down a sheer cliff) or attempting to successfully flip jelly beans into his mouth. Williams also fought it out with the villains—with fists, guns, and planes—almost as often as Steele himself did, and was as convincing handling action as he was handling comedy. 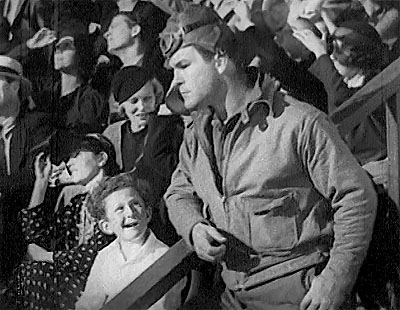 Above: A baffled Big Boy Williams has just been bested at jellybean tossing by that grinning small boy in The Mystery Squadron (Mascot, 1934). 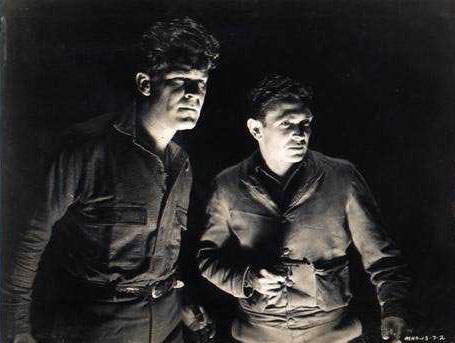 Above: Big Boy Williams and Bob Steele in a shadowy publicity still for Mystery Squadron.

In 1934, Williams signed with independent producers Max and Arthur Alexander to star in a new series of B-westerns; this run of films lasted until 1935 and would provide him with his last starring roles. In 1936, he appeared in a second serial for Nat Levine, who had been boss of Mascot and was now overseeing the serial unit at the newly-formed Republic Pictures. This cliffhanger was The Vigilantes Are Coming, a colorful frontier chapterplay that cast Williams as a rough-and-tumble mountain man named “Salvation.” Salvation, along with his buddy Whipsaw (Raymond Hatton), helped California ranchero Bob Livingston battle the attempts of a renegade US General to sell Spanish California to the Russians. Williams was really in his element in this serial– riding, shooting, and fighting with characteristic rowdiness, and verbally sparring with his equally individualistic “pard” Raymond Hatton. 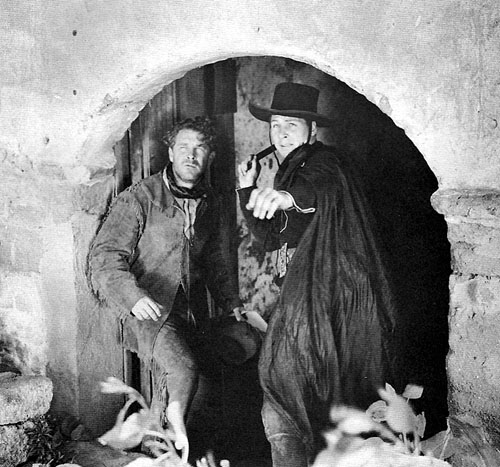 Above: Big Boy Williams and Bob Livingston in The Vigilantes Are Coming (Republic, 1936). 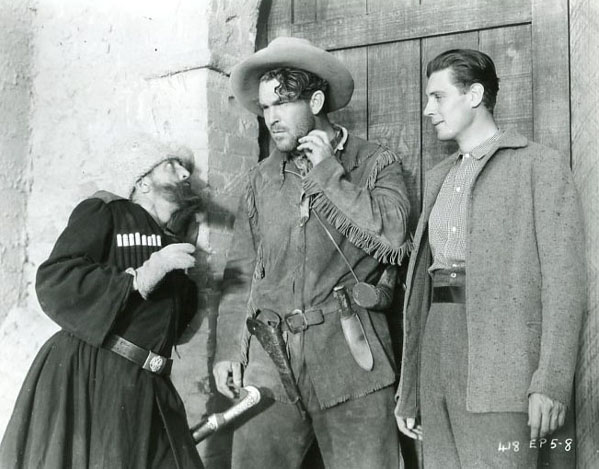 Above: Raymond Hatton (disguised as a Cossack), Big Boy Williams, and Bob Livingston in Vigilantes Are Coming.

Williams resumed his feature-film career after Vigilantes, working at studios ranging from MGM to Republic. During this time he cemented his status as a well-known Hollywood character player with roles in films like Blackmail (MGM), Dodge City and The Fighting 69th (both Warner Bros.); by 1940 he was pretty well guaranteed of second or third billing in B-films and noticeable supporting parts in A-movies. In 1941, he was one of several noted Western performers signed to appear in “the Million Dollar Serial”—Universal’s Riders of Death Valley. This Western chapterplay would have been enjoyable but forgettable had it not been bolstered by an “all-star” cast that helped to make it one of Universal’s best efforts; in addition to Williams, the serial featured Dick Foran, Buck Jones, Charles Bickford, Noah Beery Jr., Leo Carrillo, and Lon Chaney Jr. Williams was Borax Bill, a member of the good guys’ titular vigilante group, and while the large cast left him with rather less to do than in his two earlier serials, he still received a good amount of screen time, bickering repeatedly and amusingly with Carrillo’s English-language-mangling “Pancho.” 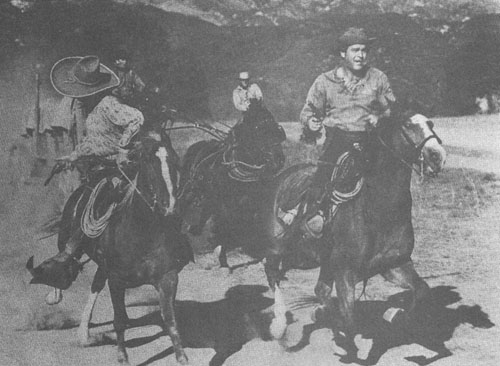 Above: Big Boy Williams leads the Riders of Death Valley (Universal, 1941) as they attempt to outrun the villains. Leo Carrillo, back to camera, is next to Williams. Glenn Strange is riding beside the wagon in the background. 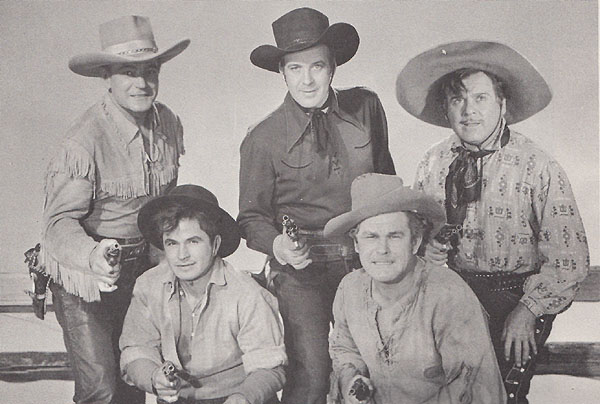 Above: Buck Jones, Dick Foran, and Leo Carrillo (left to right, back row) and Noah Beery Jr. and Big Boy Williams (front row) in a publicity still for Riders of Death Valley.

Williams would never appear in another serial, but would work in many more features over the next twenty years, playing sidekick to Roy Rogers a few times in the early 1940s, co-starring in several B-western musical comedies for Columbia later in the decade, and working in A-films like Fox’s Swamp Water, RKO’s Station West and Warners’ Rocky Mountain. In the 1950s he also began to work on television, making guest appearances on Gunsmoke, Cheyenne, and other shows. He also played the regular part of a Western circus roustabout named Pete on the 1956-1957 series Circus Boy. Overall, however, Williams’ screen appearances became much more limited during the 1950s, as he devoted more time to his Texas ranch.  John Wayne cast him in a noticeable role in The Alamo in 1960, and 1961 saw Williams in another Wayne film, The Comancheros—in a hilarious extended cameo as a roughneck gunrunner who brazenly insists he’s “reformed” after being tumultuously taken into custody, and who sells the authorities some valuable information. Whether it was planned as such or not, this memorable role would be Big Boy’s screen farewell; in 1962, he died in a California hospital following kidney failure.

Guinn “Big Boy” Williams brought a very cowboy-like quirkiness to his sidekick roles, making his characters seem rustically eccentric instead of merely stupid. He was one of the best and most authentic Western character players, and, though his cliffhanger filmography was more limited than most fans would have liked, he was also one of the serial genre’s best sidekicks. 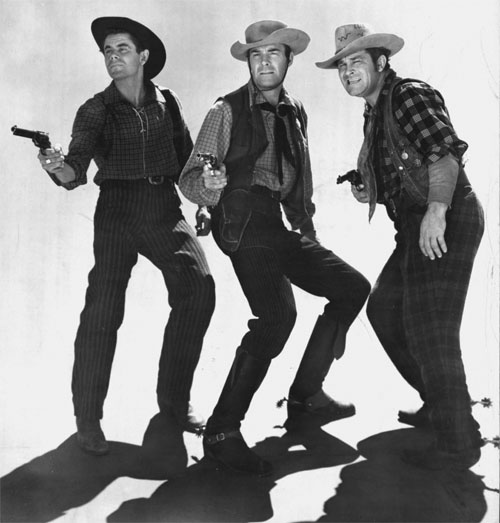 Above: Big Boy in one of his post-serial sidekick roles, with Glenn Ford and Randolph Scott in a publicity still for The Desperadoes (Columbia, 1943).

Acknowledgements: My thanks to the Old Corral page on Williams for much of the biographical information in this article.